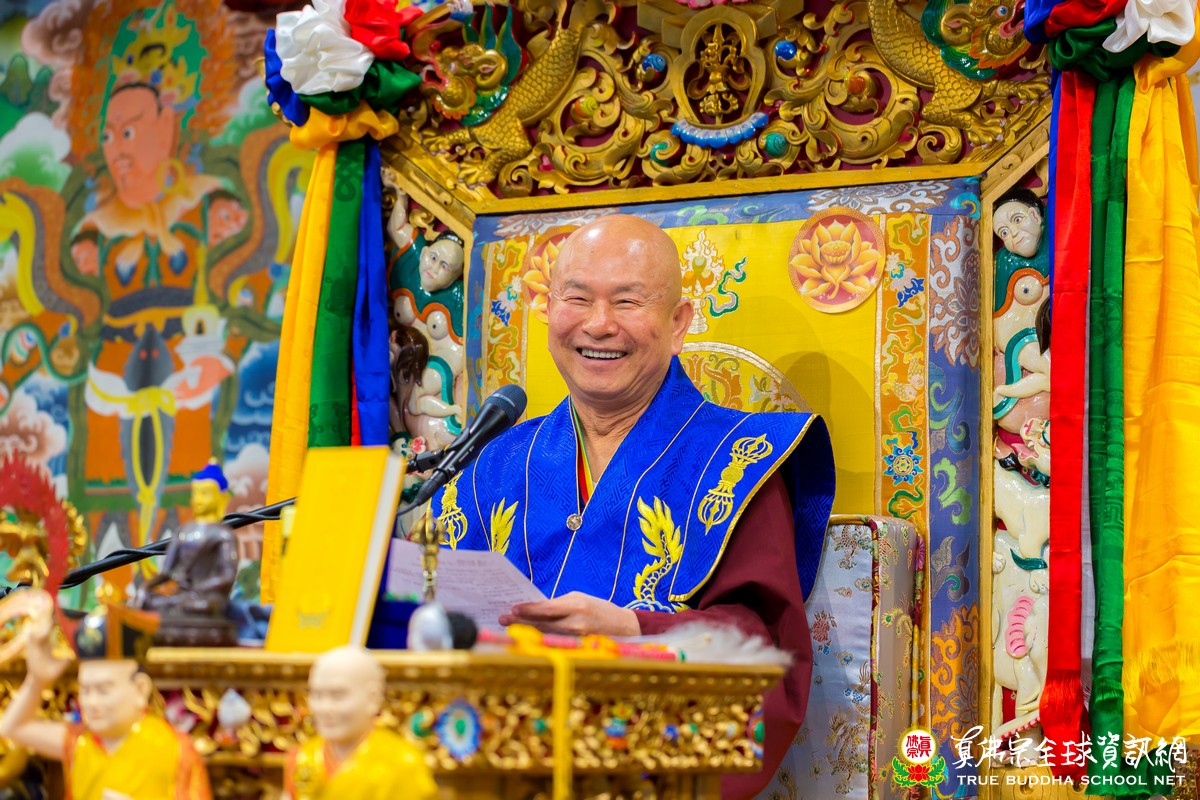 The discourse yesterday was on The Setting of the Dharma Teaching.

I explained about this piece yesterday. I wanted to know if everybody understood what I meant, so I asked some people afterwards. I had explained its meaning yesterday, but there is an even deeper meaning.

What about sleeping? Do you know that it’s got a special meaning as well? In actual spiritual cultivation, one knows that it is only a dream, but do you know? When I have a bad dream, I can transform it into a good one. How about you, can you do that? I can do dharma practice in my sleep, can you? So, it’s different! That’s the real meaning.

The life of the Buddha seems exactly the same as that of an average person, eating and sleeping; however, it is very different. Even though on the surface, it is the act of eating and sleeping, in its deepest meaning, it differs from what mundane people do. It is different; do not equate them, for everybody knows how to eat and sleep.

As for sleeping, you’re aware it is a dream; you can change your dream, you can practice in dreams, and you are doing real purifications. Do you know how to do that? As a tantric practitioner, you need to know.

Moreover, let me tell you that there are other profound meanings behind eating, dressing, lodging and traveling, which are all spiritual cultivation, as well as purification.

Mahakasyapa epitomized ideal monkhood practices; his ways of eating, dressing, lodging and traveling were extraordinary. His ascetic practice was through annihilation. What was he eliminating? He slept in between tombstones in cemeteries, under the trees or inside caves. He never slept on beds and never touched money. His eyes would never gaze at a bhikkhuni or an attractive woman; he would lower his head. That’s how foremost ascetic cultivation had been. If you look at the eyes of beautiful ladies, you’d be electrified. You’ll die if you dare to gaze into the eyes of attractive women. The monk Xuan Zhang of the Tang Dynasty met the spider genie, if that had been you, you would have been glued to her spider web and eaten up.

Therefore, being an Arhat consists of the elimination of the six thieves [senses]: eyes, ears, nose, tongue, body and mind. Mahakasyapa never touched money, in fact he had no money at all. When it came to the opposite sex, Mahakasyapa would lower his head. He never cared for name or fame.

Devadatta wanted to lead. He had such thought because he craved for name and position, thus his desire for fame became his downfall. There were also instances of downfall due to food. Instead, look at Mahakasyapa! He ate the cheapest things, and in his mind, he thought of the food to be poo and pee. Humans have five major desires: wealth, sex, fame, food and sleep. Mahakasyapa destroyed them all. This is the profound meaning of the first section. Nobody except Grandmaster Lu has explained it this way, right?

Ananda was a lazy pig; he ate until he became fat. He always courted with women, loved eating and was lustful. He wanted to enjoy everything. Among the ten chief disciples, Ananda was the only one who did not have any realms nor attainments before the Buddha entered parinirvana. Only afterwards did Ananda started to cultivate spiritually. The other nine chief disciples all had attainments by the time Buddha entered parinirvana.

Later on, he guided many people onto the path, and he had many followers. When the Buddha entered parinirvana, he returned to the Buddha’s side. Ananda wanted to lit Buddha’s cremation fire, but it was unsuccessful despite several tries. Only after Mahakasyapa returned could the fire be lit. That showed that Sakyamuni Buddha truly respected Mahakasyapa; he waited for his return.

This is [the exposition on] Chapter One—The Setting of the Dharma Teaching. Its profundity is in the annihilation of the daily life: eating, dressing, lodging and traveling; to destroy desires for wealth, sex, fame, food and sleep; and to close off the eyes, ears, nose, tongue, body and mind. Those are the key points of this section.

Has anybody expounded the Vajra Sutra this way? Have you ever listened to other people explaining it this way? Perhaps, and perhaps not. But this is how Grandmaster expounded it, explaining the profundity of this chapter.