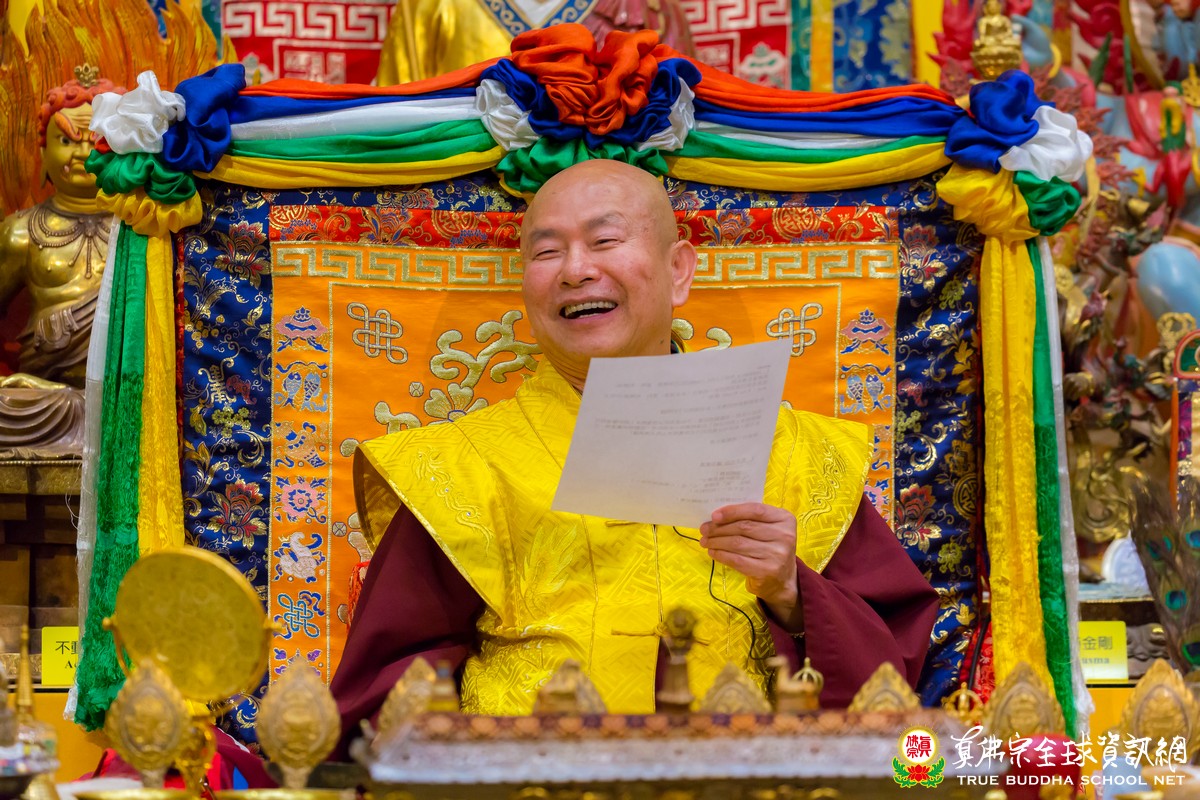 Today, I will continue to discourse the Vajracchedika Prajnaparamita Sutra.

The dharma teaching on the Vajra Sutra begins now!

As far as I know, there is no one in the world with a memory so powerful that they could commit all Sakyamuni Buddha’s sutras to memory. Such a person does not exist, at least not nowadays. My own memory is certainly not up to such a task.

One time, the Buddha was staying at Anathapindika Monastery at Prince Jeta’s Grove in Sravasti.

Since the trees were not covered in gold and there were many trees in the woods, Prince Jeta told Anathapindika that since Anathapindika had donated the land to Sakyamuni Buddha, he would donate the trees. This is the origin of the name Jeta’s Trees and Anathapindika’s Grove.

Anathapindika was extremely wealthy and had been a great philanthropist who helped the needy. He had enough money to buy the grove and donate it to the Buddha. Prince Jeta donated the trees. That’s how the name Jeta’s Trees and Anathapindika’s Grove came about. It’s called Jetavana for short.

Now you understand this excerpt “One time the Buddha was staying at Anathapindika Monastery at Prince Jeta’s Grove in Sravasti.”

Some people have wrongly translated Jeta [into Chinese] as Rootless Tree. This is wrong; it is Prince Jeta’s trees together with Anathapindika’s Grove, which was donated to Sakyamuni Buddha. And it was Sariputra who evaluated the geomancy of this land.

One time the Buddha was staying at Anathapindika Monastery at Prince Jeta’s Grove, near the great city of Sravasti, with an assembly of 1,250 monks. When it was mealtime, the World-honored One donned his sanghati robe, took up his alms bowl, entered Sravasti and went from door to door asking for food. After the almsround, he returned to the monastery and ate his meal. He then put away his robe and bowl, washed his feet, prepared his seat and sat down.

It was an assembly of 1,250 monks, so there were many people there. At mealtime, the Buddha wore his robe, took his alms bowl and went into the great city of Sravasti to ask for alms.

I will explain this part. It’s mealtime. Eating in Taiwanese is called chiah-peng. In Cantonese, it’s called sik fan. In Malay or Bahasa Indonesia, it’s called makan nasi. In Mandarin, it’s chi fan. At noon, we would say lunch time. At night, dinner time. In the morning, breakfast. There is further meaning related to this “eating.” Mahakasyapa especially chose poor people to ask for food. The Buddha asked him, “why do you beg only from the poor?” He answered that he wanted the poor to gain merits and become rich in future lives. Therefore, Mahakasyapa was like Lianxu [a very thin monk in the audience]

You can see a big difference between the two. One is the round Xuanren, the other one is the skinny Lianxu. Mahakasyapa was very thin and skinny, while Ananda was fat and round.

There’s deeper meaning to eating. The Buddha said, “one person only begged from poor people while the other only begged from the rich. Neither had the mind of equality, they were partial." One was partial towards the poor whilst the other was partial towards the rich. They were both wrong. One eats whatever is offered. This should be the mindset of a practitioner. One should not discriminate. Remember, if one discriminates, one is on the wrong track.

Let me tell you, Mahakasyapa was truly remarkable! For this very reason he was recognized as the one foremost in monkhood cultivation. Why did he leave Sakyamuni Buddha’s sangha in the end? Because Sakyamuni Buddha lived at the Venuvana Vihara.

This excerpt mentions eating, dressing, lodging and traveling, each of which has a deeper meaning.

Mahakasyapa was foremost in ancient monkhood cultivation. What he ate, how he lived, what he wore and how he traveled were different from the other monks. How did he eat? When food was offered, he would first visualize. He visualized prior to eating. Just as we do, he would make offerings to all buddhas, bodhisattvas and sentient beings of the six realms. Then, he visualized food as poo and soup as pee. This is the practice of an ascetic monk.

Practitioners should remember that it isn’t just about a mindset of equality. A practitioner must visualize that what he eats is inedible. No kidding. [Laughter. Grandmaster was kidding in saying this phrase in Cantonese, knowing that it was meant as a joke.] As if drinking pee and eating poo is the way of an ascetic monk.

Why did Mahakasyapa leave the sangha? Because Sakyamuni Buddha went to live in Venuvana Vihara and Jetavana Grove. Those were luxurious mansions, and Mahakasyapa was not comfortable living there. Where did he live? He lived in the cemetery, in between graves. He lived in caves, under trees. These were his abode. Even while he slept, he didn't lie down. He slept in a sitting up position. That was the real Mahakasyapa.

This was the reason why he was recognized as a great disciple, an exemplar. He was foremost in monkhood cultivation and foremost in abiding by ascetic precepts.

Unlike him, Ananda slept like a pig. For this reason, Ananda and Mahakasyapa didn’t get along well. One was like Lianxu, one was like Xuanren. Their body shapes were totally different – one was very fat and the other was skinny. That’s how Mahakasyapa was. Mahakasyapa’s fingers were as bony as chicken feet.

We will now discuss dressing. How did Sakyamuni Buddha wear his clothes? It was just a piece of cloth! How did the exemplar monk wear his clothes? He wore cloth used to wrap corpses that he found in burial grounds. He wrapped himself in this burial shroud. That’s how Mahakasyapa dressed.

Later, the monks dressed similarly to how Thai monks wear their robes nowadays. They still maintained the fashion of how robes were worn in ancient India, unlike how we dress nowadays. We wear skirts and tops, which is the lama outfit. They would wear a shawl called the samadhi cloth. That’s all changed now. Originally, they just wore a piece of cloth wrapped around their body. It was not high-quality cloth either. It was like the burial shrouds used to wrap corpses in India.

There’s deeper meaning in dressing. Do you know how to wear a piece of cloth like the ones worn by the Theravada or Hinayana monks? [Grandmaster asked the monks in the audience.]

…donned his sanghati robe, took up his alms bowl, entered the great city of Sravasti and went from door to door asking for food.

They walked barefoot back in those days. Nowadays, monks wear slippers or even leather shoes. In the past, they wore straw sandals. It rained a lot during the monsoon season in India. Because of rain, many insects would emerge. Just by making the almsround one would step on the insects. To avoid killing, the monks went on retreat for the three months of the monsoon season.

“After the almsround, he returned to the monastery,” which is the Jetavana Vihara, and everyone “ate their meal, put away their robes and alms bowl and washed their feet.” Since they went barefoot, their feet were dirty and needed to be washed. Then, they prepared their seats. [The Buddha’s seat was] a rather wide seat with cushion on it, sort of like a bed. They placed a mat down and sat on it accordingly.

With regards to ascetic monks, we have talked about their manner of eating, their clothing which was to wear a burial shroud wrapped around the body, and their abode which was burial grounds, caves or under the trees. For transport, they walked barefoot.

Does anyone have an opinion on this section?

Later, Mahakasyapa left the sangha. Why? Because of changes within the sangha and because Sakyamuni Buddha had begun to accept food offerings. There were benefactors who said, “I’ll treat you all, all the sangha, to eat.” Hence, they all went out to eat. At the end, the Buddha also accepted offerings of meals. The clothing also changed from burial shroud to kasaya robes, which are pieces of discarded cloth patched together. That’s called bainayi [in Mandarin], meaning ragged robe of old cloth patches. Now, do you understand my explanation?

The Buddha in his earliest time lived in caves. Then, someone made an offering of Venuvana Vihara. Later, there was another patron who donated a more beautiful, luxurious monastery, the Anathapindika Monastery at Jeta’s Grove—Jetavana. It was a magnificent piece of land where Sariputra had checked the geomancy.

Now I have finished this chapter.

Our spiritual cultivation nowadays is really, too easy. Too easygoing for all of you monks. Too nice! Lianxu was not skinny because he restrained himself from eating. He was skinny due to a bad digestion. He wasn’t like Mahakasyapa. Mahakasyapa performed visualization. Even when he received delicious food, he visualized it as feces and urine. When he ate, he visualized that way.

For tantric practitioners, everything is very different. When cultivating tantric practices, we must visualize prior to eating. Our lives are so fortunate. Even our lama robes are nicely tailored. [shaking head]

Next discourse on the Vajra Sutra: Discourse 5, 8 August 2021 - Chapter One—The Setting of the Dharma Teaching (continued)