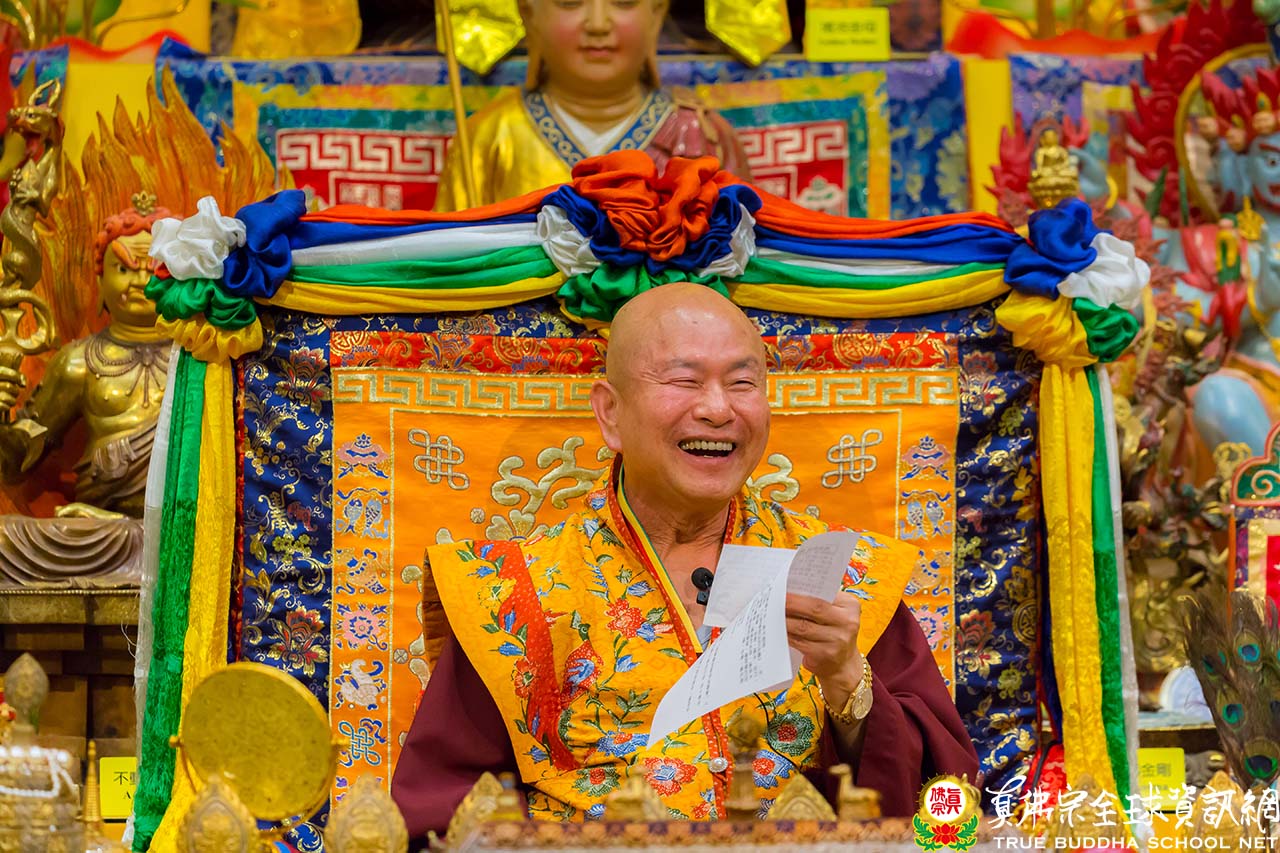 Now, I will talk about the Vajra Sutra. Chapter Two—The Request of Shanxian.[1] Let me ask you all. What is Shanxian [Good Manifestation]? Masters, you often chant the Vajra Sutra: Chapter One—The Setting of the Dharma Teaching, Chapter Two—Subhuti’s Request. If you understand, please raise your hand. What is Shanxian? Master Lianwang, do you know? [Master Lianwang answered, “I guess Shanxian is Subhuti’s name.”] Is it a wild guess? Please be seated. He guessed correctly.

Subhuti had three names. The first name is Born-Empty “Kongsheng.”[2] The second name is Good and Auspicious “Shanji.”[3] The third name is “Shanxian”, which means good manifestation. The sutra used the third name, The Request of Good Manifestation. Many people don’t know that Shanxian is Subhuti’s other name. Master Lianwang guessed right. [Referring to him, Grandmaster said] you caught a fish in the dark. [laughter] There are reasons behind his three names.

The Buddha said, “Excellent Subhuti, as you said, the Tathagata is mindful of the bodhisattvas and entrusts the bodhisattvas. Now listen carefully while I tell you how the mind of good men and women should abide when they strive for the perfect enlightenment of anuttara samyaksambodhi, and how they should master their minds.”

I was reading an excerpt of the sutra. First, I will talk about the origin of the name Shanxian. I might not have enough time tonight to cover this topic alone. What time is it now?

Let me talk about the name “Subhuti” first. Some people split the name Subhuti [“Xu Puti” in Mandarin] into “Xu” meaning needing, so “Subhuti” becomes “needing bodhi.” Is that right? You can say it’s right because everybody needs bodhi.[4] You can also say it’s wrong because you should not break up his name. His name is Subhuti.

I will tell you something that no one else knows, only Grandmaster knows; it is not even written in the Avadanasataka[5] Sutra. People talk about three lifetimes of the past, present and future. I talk about four lifetimes. Only Grandmaster Lu knows about Subhuti’s earliest lifetime, nobody else knows. But after I talk about it, then everybody will know.

What I want to talk about now is his earlier lifetime. It is not in the sutra, and nobody knows. How did I know? Because Subhuti told me. In one of his past lives, he was also a spiritual cultivator. He took care of several orphans inside the temple. He took in children who were discarded by their parents and cared for them. The temple was well-known for it; that people can leave their unwanted children at the temple, that Subhuti would take care of the orphans.

At the time, Subhuti was the temple’s abbot. The news spread. There was a group of robbers who thought the temple must have lots of money. They thought Subhuti must have been rich to be able to take care of all the orphans. They went to rob the temple but no matter how hard they searched, they couldn’t find any money. They forced Subhuti to give them money. The robbers were cruel, and they threatened Subhuti, “Give us the money!” Subhuti said, “I don’t have any money.” The robbers asked, “if you have no money, how can you take care of the orphans?” He said, “When we go out for alms-begging, we ask for a little more so we can feed these orphans.” The robbers didn’t believe him. The robbers captured several of the orphans who were crying. They threatened Subhuti, “if you don’t tell us where you hide the money, we would kill the orphans.” Subhuti said, “But I really have no money. I just feel pity for the orphans, so I care for them by begging for alms. I just eat a little bit myself and then I share the rest with the orphans.”

But the robbers didn’t believe him. “If I don’t kill one orphan, then you wouldn’t tell where the money is hidden.” The robbers did kill the kid and the blood was all over the ground. Subhuti cried out loudly. He really didn’t have any money. Had he any money, it would not have been so horrible. The robbers then killed the second kid. Then, they killed all the orphans. Subhuti still couldn’t give any money. Finally, they realized that Subhuti really didn’t have any money, so they finally left. Subhuti was left alone. At that time, Subhuti was furious, and his heart was full of hatred. He didn’t even want to be a human being anymore.

Because all the orphans were killed, he left the temple. He went deep into the mountain and lived in a cave until he died. This is what Subhuti told me. Nobody else knew. He had hatred toward human beings in his heart. His hatred towards mankind started then. That’s one lifetime of Subhuti, that’s how he lived his life then.

According to the Avadanasataka Sutra, Sakyamuni Buddha talked about the origin of Subhuti. In the second lifetime, he was also an abbot of a temple. He brought all his followers to go for alms begging for food. However, all his disciples left him one by one. They didn’t believe in him anymore because Subhuti still carried anger in his heart. He constantly scolded everybody, so they all left. Afterwards, he chastised them even more because he already hated human beings to start with; he said all human beings are no good. The way he cursed and rebuked was very harsh, and all his followers left him. That is according to the scripts written in the Avadanasataka Sutra.

One day, his retribution as a poisonous snake was ending but his hatred was still there. There was a garuda[6] who flew and captured the snake using his claws. The garuda grabbed him from the sea and flew to the sky. The garuda was going to eat the snake, which was a huge and nice meal.

At this time, Sakyamuni Buddha just attained Buddhahood; he knew this was happening. He manifested himself as a monk sitting halfway up the mountain meditating. The garuda carrying the snake passed by the monk. The snake cried out for help and nodded his head to the monk, to pay homage. He gestured to the monk, “monk, please save me.” He was about to become food. But the monk, who was actually Sakyamuni Buddha, did not save him, and he ended up being eaten by garuda.

Although the snake cried for help from Sakyamuni Buddha and nodded his head respectfully, Sakyamuni Buddha did not save him. That was one of his lifetimes that was recorded in the Avadanasataka Sutra.

In the later lifetime, he was reincarnated as a child in a Brahman family. This Brahman family was very wealthy and had many houses filled with gold, silver and precious items. However, when he was born, everything was gone. That’s why his family named him Kongsheng, meaning born empty. His family said, “as soon as you were born, all our treasures disappeared, we became empty.” So they named him Born-Empty. They went to see a mystic who told them that it was an auspicious sign. The mystic said that he is a good child, and he’s a symbol of auspiciousness; therefore, his second name is Shanji which means good and auspicious. Seven days later, all the treasures and luxurious manors reappeared. That’s why his family gave him a third name, Shanxian which means good manifestation. Therefore, Subhuti’s names are Born Empty, Good and Auspicious and Good Manifestation.

That’s how the name Shanxian came about. Now do you understand? Master Lianwang’s wild guess was like trying to catch a fish in a dark pond, and he caught it. Shanxian is Subhuti’s name. He was originally given named Kongsheng, then Shanji. His third name is Shanxian.

At that time, the senior monk Subhuti was present at the assembly. He rose from his seat, bared his right shoulder, knelt on his right knee, and with palms joined, respectfully bowed and addressed the Buddha.

Also, the right knee is a tradition in the kingdom of India. You bared the right shoulder and knelt on your right knee primarily to show that everything moves clockwise. Clockwise represents the correct path or the proper way. What we do is the proper thing, that’s why it’s the right shoulder and the right knee. Whenever we circumambulate around a pagoda, mountain, lake or temple, it’s always done clockwise, never anti-clockwise. It’s the same when you turn the dharma mantra wheel; it’s always clockwise, never counterclockwise. You want it to be clockwise, which represents proper dharma.

If it’s counterclockwise, it’s deviant or the wrong path. If you show your right shoulder or right arm, that means you’re on the right path. It’s not to show off your sexiness, like what the geshe said. “Geshe” is like a doctorate degree in Buddhism. There are several different levels of geshe, like high level or low level geshe. We asked him, “why did you just show your right shoulder and not your left shoulder?” He said, “to be sexy.” Right or left shoulder should be the same [in case of being sexy].

[4] Bodhi means the mind striving for enlightenment for the benefit of sentient beings.