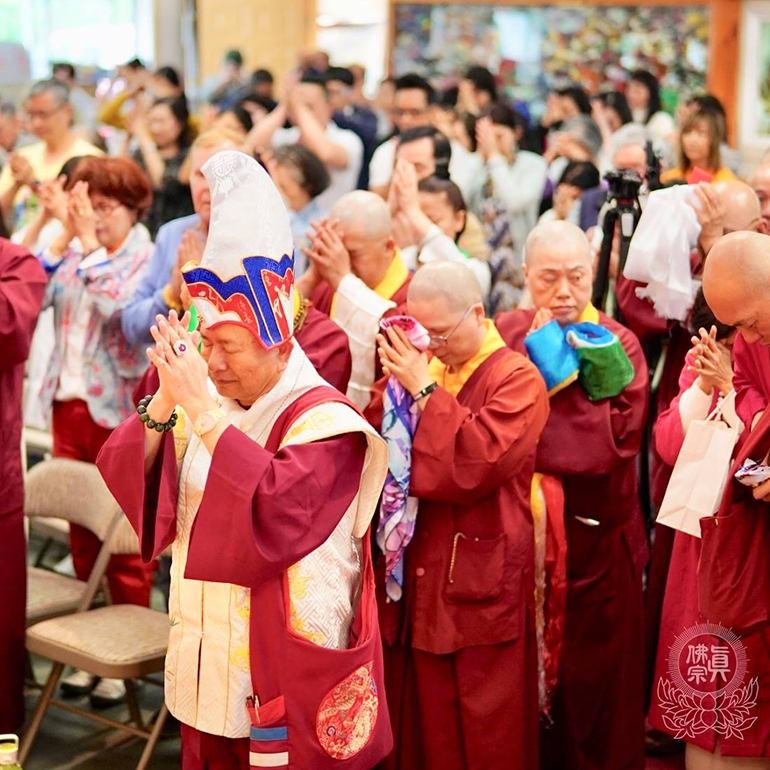 The epithet of His Holiness Living Buddha Lian-sheng is:

There are two reasons why he is honored as "Living Buddha":

1. Five million disciples worldwide all revere and address him as a living buddha.

2. The state government of Washington State, USA, has also presented him with an award, respectfully addressing him as Living Buddha.

Living Buddha Lian-sheng, whose secular name is Sheng-Yen Lu, was born in Chiayi, Taiwan in 1945. He graduated from the Department of Geodesy and Land Surveying of Chung Cheng Institute of Technology, and propagates True Buddha Tantric Dharma through his writings, paintings, dharma discourses and other means. Disciples who have taken refuge worldwide number more than five million, including many well-known Tibetan living buddhas.

Living Buddha Lian-sheng was originally a Christian, subsequently learning Taoism, then Exoteric Buddhism, finally learning Tantric Buddhism. After moving to Seattle, USA in 1982, he began to formally turn the great dharma wheel of Tantric Buddhism to deliver sentient beings, distilling and integrating the keys of difficult and obscure ancient Tantric dharma into unexcelled dharma practices which are easy to learn and understand and suitable for modern times.

Living Buddha Lian-sheng has said: "I practice according to True Buddha Tantric Dharma, from the Four Preliminary Practices, to Root Guru Yoga, the Personal Deity Practice, Treasure Vase Qi, Inner Fire, Opening the Central Channel, Opening of the Five Chakras, Five Heruka Practices, Highest Yoga Tantra, and Dzogchen. By practicing these one by one in sequence, I attained unsurpassed and complete enlightenment, and arrived at the accomplishment of Lotus Light Self-Mastery Buddha."

Living Buddha Lian-sheng was a devout Christian and Sunday School teacher in high school. Later, his divine eye was opened by the Golden Mother of the Primordial Pond, and subsequently he was taught by Mr. Three-Peaks-Nine-States* (San Shan Jiu Hou Xian Sheng) as well as Taoist Master Qing Zhen of the Qing Cheng Taoist School (Reverend Liao-Ming 了鳴和尚), and learned Taoist practices, internal alchemy and talisman practices, Early Heaven School of Geomancy, Esoteric/Tantric Buddhism, the five major classes of knowledge in Buddhism (pañcavidyā) and so on.

Living Buddha Lian-sheng studied under many teachers, and the number of teachers he had affinity with was even greater. As he received divine sight very early on, he became renowned worldwide for his divination ability.

Later he moved many times, even as far away as Seattle, USA, where he immersed himself in the practice of Tantric teachings. During samadhi, Shakyamuni Buddha personally blessed him by placing his hand upon his crown, and conferred upon him the prophecy of buddhahood. Maitreya Bodhisattva bestowed upon him the Red Crown, Amitabha Buddha exhorted Living Buddha Lian-sheng to teach and deliver sentient beings widely, while Padmasambhava personally transmitted Tantric teachings to him. He was recognized as a "Great Enlightened Dharani Brilliance Vajra Acarya," bestowed a Holy Red Crown and the epithet of the Holy Red Crown Vajra Master Venerable Lian-sheng. (Note: Buddhas and bodhisattvas transmit dharma and confer prophecies only upon true cultivators with accomplishment.) He also personally saw Vajrasattva who exhorted him that he was the Secret Master of the Realm of Vajra-mantra.

Living Buddha Lian-sheng has long known that he is an emanation of White Mahapadmakumara from the Maha Twin Lotus Ponds in Sukhavati, the Western Paradise of Ultimate Bliss, one who has come again due to past vows and Amitabha's entrustment.

Living Buddha Lian-sheng is a true tantric cultivator who has cultivated the Four Classes of Tantra (Action Tantra, Conduct or Performance Tantra, Yoga Tantra, and Highest Yoga Tantra) to become one with the supreme consciousness, merging into the Ocean of Vairocana (all-encompassing ocean of dharma nature). He has genuinely accomplished the Eight Outer Practices and the Eight Inner Practices. Thus, many Tibetan tulkus and eminent Sutrayana masters have also taken refuge in Living Buddha Lian-sheng. The number of disciples around the world who have taken refuge continues to increase each day.

As Living Buddha Lian-sheng has already validated enlightenment, he has authored more than 285 books pertaining to spiritual cultivation (as of October 2021), and they have been translated into Indonesian, English, French, Vietnamese, Spanish, Japanese, Portuguese, Hindi, and so on. The full series of his books are in the collection of the Library of Congress in the United States. The Japanese publishing industry also praised him as "an immortal of contemporary China." Living Buddha Lian-sheng is unparalleled in disseminating dharma through written text in the modern age. Living Buddha Lian-sheng also uses painting as a means to teach dharma, and to date, his artworks have been compiled into 11 painting catalogues, published and distributed. Living Buddha Lian-sheng gives dharma teachings every day, and from 1990 until the present time, countless dharma lectures have been compiled into books, audio tapes, video tapes, and DVDs to be distributed.

*Note: One can refer to Chapter 1 "The True Identity of Mr. Three-Peaks-Nine-States", Book 120 "New Revelations from the Buddha-King", available in English on www.tbboyeh.org

▲ Philosophy or Outlook Towards Life

Living Buddha Lian-sheng highly values punctuality, honor and integrity, as well as diligence with perseverance. Each day he writes one article, practices dharma, recites buddhas' epithets or mantras, and has kept this daily consistency over decades.

He advocates "being natural, and wu wei - action without the intent of gaining anything." He actively carries out all endeavors diligently, but is never pretentious. He delights in tranquility, but even amidst movement and activity, he remains calm and at ease, going with the flow of affinities, letting things take their natural course.

Cherishing affinities and blessings throughout his life, Living Buddha Lian-sheng practices the Four Immeasurables of loving-kindness, compassion, empathetic joy, and equanimity. Free from arrogance and greed, he is calm, without strife, and retreats from success and fame.

Living Buddha Lian-sheng often reminds True Buddha School practitioners to be open and sincere in their interaction with others, to support each other, and always maintain the nature of a spiritual cultivator. He cautions disciples that the most important thing in spiritual cultivation is the cultivation of one's heart, and the cultivation of one's heart requires one to develop bodhicitta, and be free from all appearances. One has to take full responsibility for all of one's own karma.

An enlightened living buddha has a mind that encompasses the universe, and his mind and the universe are one. The universal consciousness is equivalent to his mind, and thus his thoughts give rise to dharma power, forming various kinds of inconceivable supernatural powers to help sentient beings, enabling them to increase in blessings and wisdom.

Living Buddha Lian-sheng has firmly said: As long as one follows True Buddha Tantric Dharma and continually practices with diligence, there will come a day when one becomes "enlightened," and arrives at the state of liberation.

Living Buddha Lian-sheng has in fact already made vows in numerous past lifetimes to save and deliver sentient beings in each lifetime. "To save sentient beings even if my body and bones are shattered." "Not to attain buddhahood until hell is empty."

▲ All for Sentient Beings

Living Buddha Lian-sheng's life in the United States is virtually the same every day. In the morning he writes, in the afternoon he replies to letters, in the evening he practices dharma (to pray for blessings for sentient beings and for the averting of disasters), meditates and travels out-of-body (to bless and save sentient beings), and is an enlightened master of the ten dharma realms. For the sake of dharma, for the sake of sentient beings, he carries out all endeavors with infinite diligence and zeal.

As long as one practices dharma sincerely, Living Buddha Lian-sheng can enter into the dreams of sentient beings, to teach, bless, and save... Only a truly accomplished adept would be able to manifest such supernatural dharma power, and sentient beings should know to cherish it.

▲ Disseminating Dharma Around the World

▲ Clear Evidence of the Manifestation of a True Buddha

Manifestation of a Perfect Form——

Living Buddha Lian-sheng's facial appearance has changed greatly since his youth, which is not something ordinary monks and lay cultivators can do. This is an indication of a Chakravartin (dharma wheel-turning benevolent and holy king).

Living Buddha Lian-sheng can radiate various colors of light all over his body, and the golden light from his brow-point chakra is especially wonderful. This lotus light is evidence of his attainment, and also proof of his entire body transforming into rainbow light.

An Opening at the Brahma Aperture / Crown Chakra——

When Living Buddha Lian-sheng's qi entered his central channel, his crown aperture naturally opened, an opening as large as a copper coin. This Brahma-Randhra (Opening of Brahma) indicates the highest accomplishment of inner cultivation practices, and is also the aperture of a living buddha.

Living Buddha Lian-sheng has validated "Rainbow Longevity"/ the Rainbow Body, and become a master of his own lifespan. He has disclosed his Bazi (the time, date and year of his birth), and he is unafraid of any curse or black magic spells.

Living Buddha Lian-sheng does not forsake sentient beings in the spirit world. He carries out bardo deliverance based on Mahamudra, and is able to allow the living to witness the spiritual manifestation of the deceased.

Bestowal of Blessings and Superseding——

Living Buddha Lian-sheng can bestow blessings on believers with pure and sincere faith, and enable disciples to become liberated from all sufferings.

Living Buddha Lian-sheng is able to understand all Buddhist mantras; his wisdom has surpassed the wisdom of bodhisattvas of the tenth bhumi, and he is the Secret Master of the Realm of Vajra-mantra.

Living Buddha Lian-sheng entered deeply into Tibetan Tantric Buddhism and received the transmission of terma from Padmasambhava, akin to Nagarjuna Bodhisattva entering the Dragon King's Palace deep in the ocean to read secret and undisclosed Buddhist teachings (taught to the nagas by Shakyamuni Buddha).

To receive and deliver sentient beings, Padmakumara's mind has manifested two Buddha-lands (one for the Bliss Body and the other for ordinary beings). Many auspicious signs at the time of death of devotees have validated the truth of the Buddha-lands.

Unperturbed by the Eight Worldly Dharmas——

H.H. Living Buddha Lian-sheng founded True Buddha School on the pure compassion of buddhas, and he abides in "unwavering Right Mindfulness and quiescent meditation." He not only has all the marks of an acharya replete in the virtues of both the stage of creation and the stage of completion, but also superior virtues. He is an "acharya abiding in the samadhi of the stages of perfection," and can enter the "samādhi of the great void," "samadhi of absolute truth," "Nagya's grand samadhi in the Ocean of Vairocana," "samadhi of great bliss and the nature of true emptiness," and "fire light samadhi." Because he abides in unwavering Right Mindfulness, it gives rise to spontaneous wish-fulfillment, which is indeed a manifestation of "great might and power."