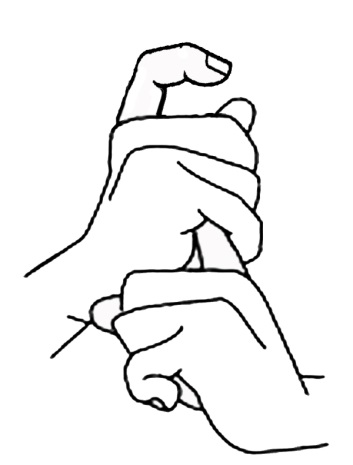 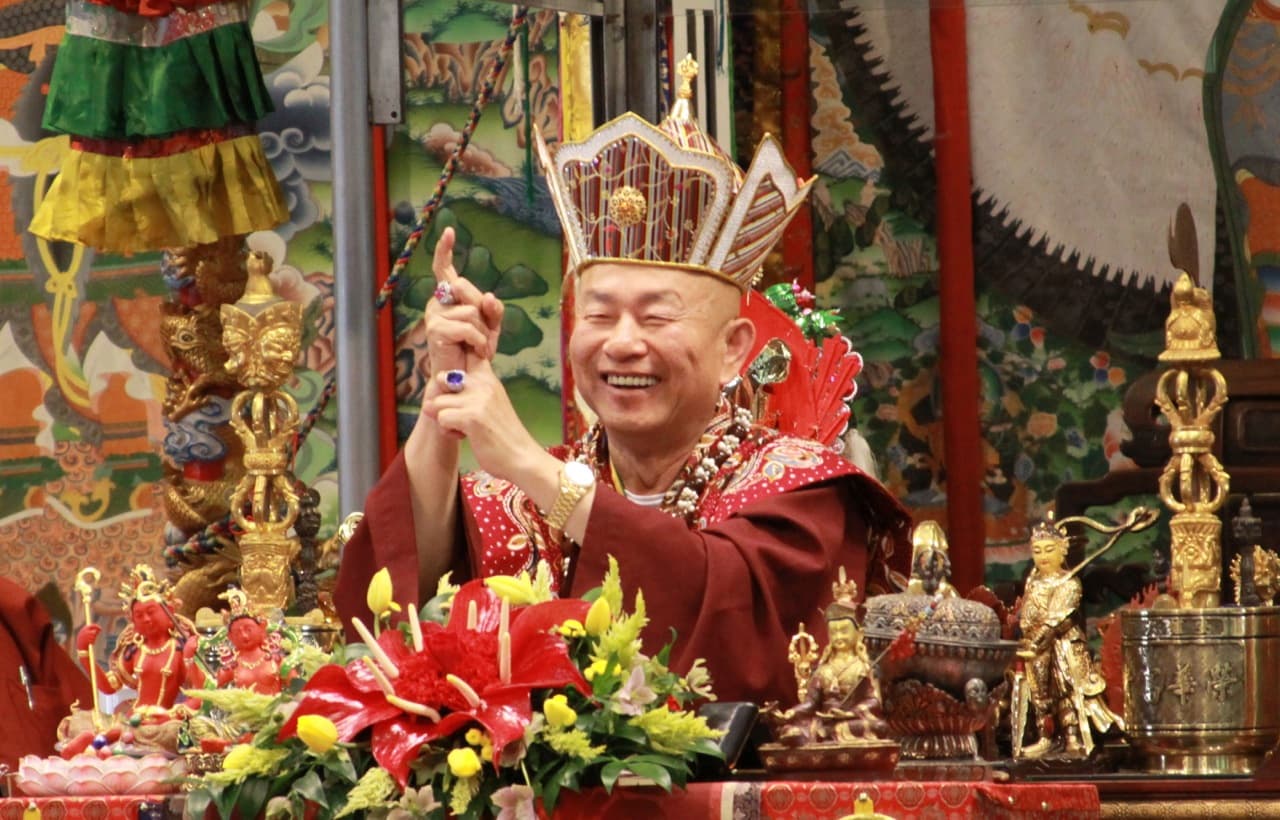 It is the same as the Vajra Hook Mudra. The left hand forms a fist with thumb on the outside and index finger standing. The right hand wraps around the left index finger with the right index finger extending in a hook form.

Red Manohara Vasudhara has a red body and the looks of a 16-year-old girl. She wears silken celestial garments and is ornamented with precious jewels. She looks vigorous and radiates brilliant light. Red Manohara Vasudhara holds a vajra hook in her right hand and a treasure spewing mongoose in her left hand. She is sitting with her right leg slightly extended and her left leg bent inward.

When Amitabha Buddha was establishing the Western Pure Land of Ultimate Bliss, Red Manohara Vasudhara accompanied him by his side as he travelled through a trillion buddha lands. Red Manohara Vasudhara came swirling out from Amitabha Buddha's immovable heart as an emanation, carrying a vajra hook to hook the quintessence of each buddha land, thus creating the entire Western Pure Land of Ultimate Bliss.

Red Manohara Vasudhara holds a vajra hook in her right hand and a treasure spewing mongoose in her left hand. She is red and wears a beautiful crown. In Tibet, Red Manohara Vasudhara is depicted as a 16-year-old girl. Nowadays, we consider children to be adults when they reach 18. In Tibet and India, girls mature at an earlier age. In these countries, 16 is considered the perfect age.

When cultivating Red Manohara Vasudhara Practice, one forms the Hook Mudra. Visualize that the vajra hook begins to move, enlarges and expands outwards. One uses the vajra hook to hook whatever one desires back to one's home. Visualize whatever one wishes being dropped from the hook infinitely like a boundless sea of clouds. The key point is to visualize Red Manohara Vasudhara's hook moving while one's Hook Mudra is also moving. This is the key practice point. One can also visualize Red Manohara Vasudhara's eyelashes transforming into a hook, hooking all wealth and riches down from space.

Upon completing a cultivation session, one recites the Red Manohara Vasudhara Praise Verse:
''Wang-xi-wu-liang-zhi-shan-xing。Zheng-de-cai-shou-ji-wei-de。
Mu-xiang-xing-zhe-shi-cai-bao。Zeng-cai-fo-mu-wo-jing-li。''
(Boundless past deeds of virtues
Transmute into wealth, longevity, and magnificence
Buddha Mother bestows upon practitioner riches and treasure
I pay homage to the enriching Buddha Mother)

Red Manohara Vasudhara can eradicate disasters and calamities, bestow and increase riches and wealth, bless one to get a promotion, deliver beings in the netherworld to the pure land, increase the power of love and respect, cure disease and illness, and remove karmic obstacles. Whatever we wish for, Red Manohara Vasudhara will hook it for us.

If a disaster occurs, one can eradicate it by hooking it away with the vajra hook. If one has any kind of bad luck, one can use the hook to banish it, hooking it far, far away. Red Manohara Vasudhara is a very important deity. Anything good can be hooked in and anything bad can be hooked away. As long as one attains spiritual union with Red Manohara Vasudhara, one's wishes will always be fulfilled.

The Dharma power of Red Manohara Vasudhara is tremendous. This deity is truly special, and her practice is only found in the True Buddha School.


* Indra's Pearl Net: A vast net which hangs in Indra's palace. Its strands are joined together with jewels. When light reflects from the jewels it is reflected endlessly throughout the net.