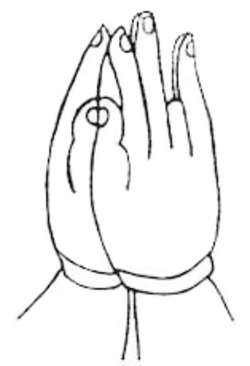 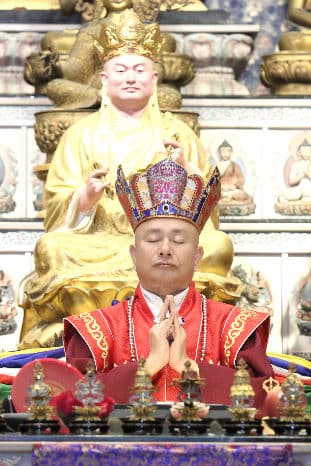 Place palms together with the ring fingers hooked to each other. 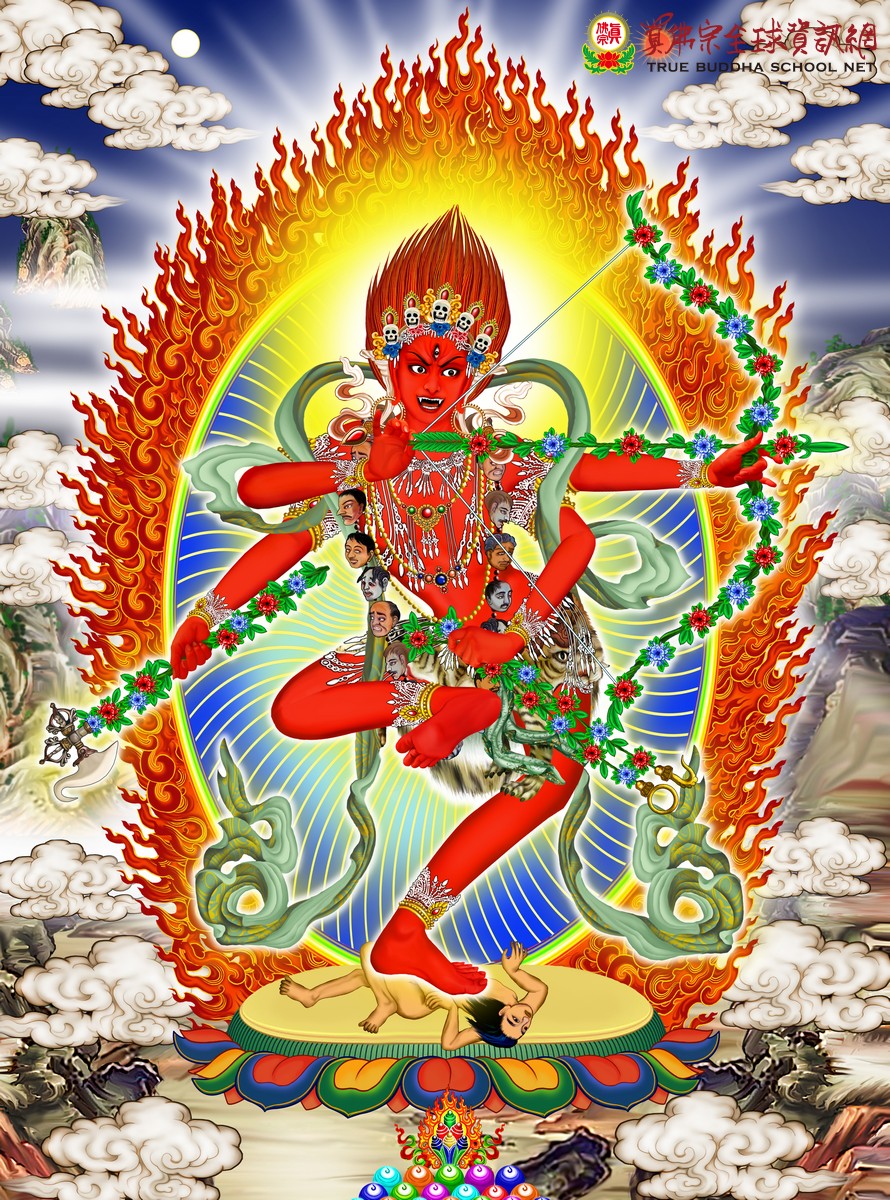 Kurukulla, with one face and three eyes, wears a Kuru crown of skulls. She is young, beautiful, and red in color. Her smile is wrathful. Her upper torso is adorned with a red celestial garment while her lower torso is fitted with a tiger skin skirt. Her chest is ornamented with rubies and her body radiates red jewel light.

【Living Buddha Lian-sheng Sheng-yen Lu Dharma Discourse - Kurukulla Background and Key Cultivation Formula】
The origin of Kurukulla is Amitabha. She is a goddess of love in Tibet and India and has an alternate name of ''Zuoming Buddha Mother.'' ''Zuoming'' means Kurukulla Practice is primarily karma practice. Kurukulla and Ragaraja are equally great deities of love and respect.

The power of Kurukulla is extraordinary. She is a magnificent bodhisattava who transcends the world. The greatness of Kurukulla lies in her potent power of magnetization. Those who cultivate Kurukulla Dharma will become greatly accomplished. Whatever they undertake will succeed and flourish on a large scale. Hence, Kurukulla is a highly significant and important deity.

Because she has the ability to brighten sentient beings with radiant light, she is also called Zuoming Buddha Mother. She increases the light and radiance of one's body, the brightness of whatever affairs one may undertake, the illumination of one's political standing, and the brilliance of one's success and accomplishments.

In addition to holding a lasso and a hook, Kurukulla holds a bow and arrow just like Cupid in Greek mythology.
Bow and Arrow: When one is hit by Kurukulla's arrow made of utpala flowers, one's mind will be full of adoration.
Lasso: The lasso is for one to cast out and tightly binds the other party. If the other party is someone that one likes, then it represents small scale of love and respect. If the other party is a group of people, it represents large scale of love and respect.
Hook: To hook someone. If one seeks better treatment from another person or one's superior at work, one can use the hook to hook them in. Once hooked, that person will treat you very, very well.

In addition to magnetizing romantic love between men and women, Kurukulla can also harmonize relations within families, at work, in society, and even between all sentient beings. Kurukulla has great authority and power and is highly respected. She also has the power of subjugation.

One can obtain great love and respect by practicing Kurukulla Dharma. If one is a politician, then one can be president and be admired by the people. If one is in the field of religion, one can undertake the path of Buddhism and become the founder of a sect. If in show business, one will have millions upon millions of fans. Whether one's undertakings are on the larger scale of a nation or society as a whole, or on the smaller scale of family harmony, love and marriage, career, etc. all one's undertakings will benefit from the power of tremendous love and respect. If one desires to become a leader, a president, or a king, practicing Kurukulla Dharma will enable one to attract all sentient beings and cause them to believe in, praise, elect, and advocate one.

【Kurukulla's Four Vows】
The key cultivation formula for Kurukulla Practice is to arrange five red candles and five red flowers together when practicing. Kurukulla will manifest when you complete 600,000 recitations of her mantra, and all one's prayers and wishes will be granted.

When one practices the Ten-direction Arrow-shooting Sadhana, arrows made of peach blossoms and smoke offerings of peach blossoms will flow everywhere throughout the ten directions. One's infinite, powerful charisma will affect anyone who is hit by the arrows one shoots. If one is unable to become president in this life, one will definitely become president in one's next life. Furthermore, in one's next life, one will be rich. Whatever one's undertakings or desires, whether for fame, status, or wealth, one will succeed. Kurukulla does not only possess arrows. She also has a hook capable of hooking everything one wishes for, and a lasso capable of binding and bringing in whatever one desires. All wishes will definitely come true. By practicing this Dharma, one will experience a trouble-free love life and a perfect marriage. One will gain the respect of one's superiors, colleagues, and all people, which is wide-ranging love and respect. This is the primary significance of the Kurukulla Ten-direction Arrow-shooting Practice. 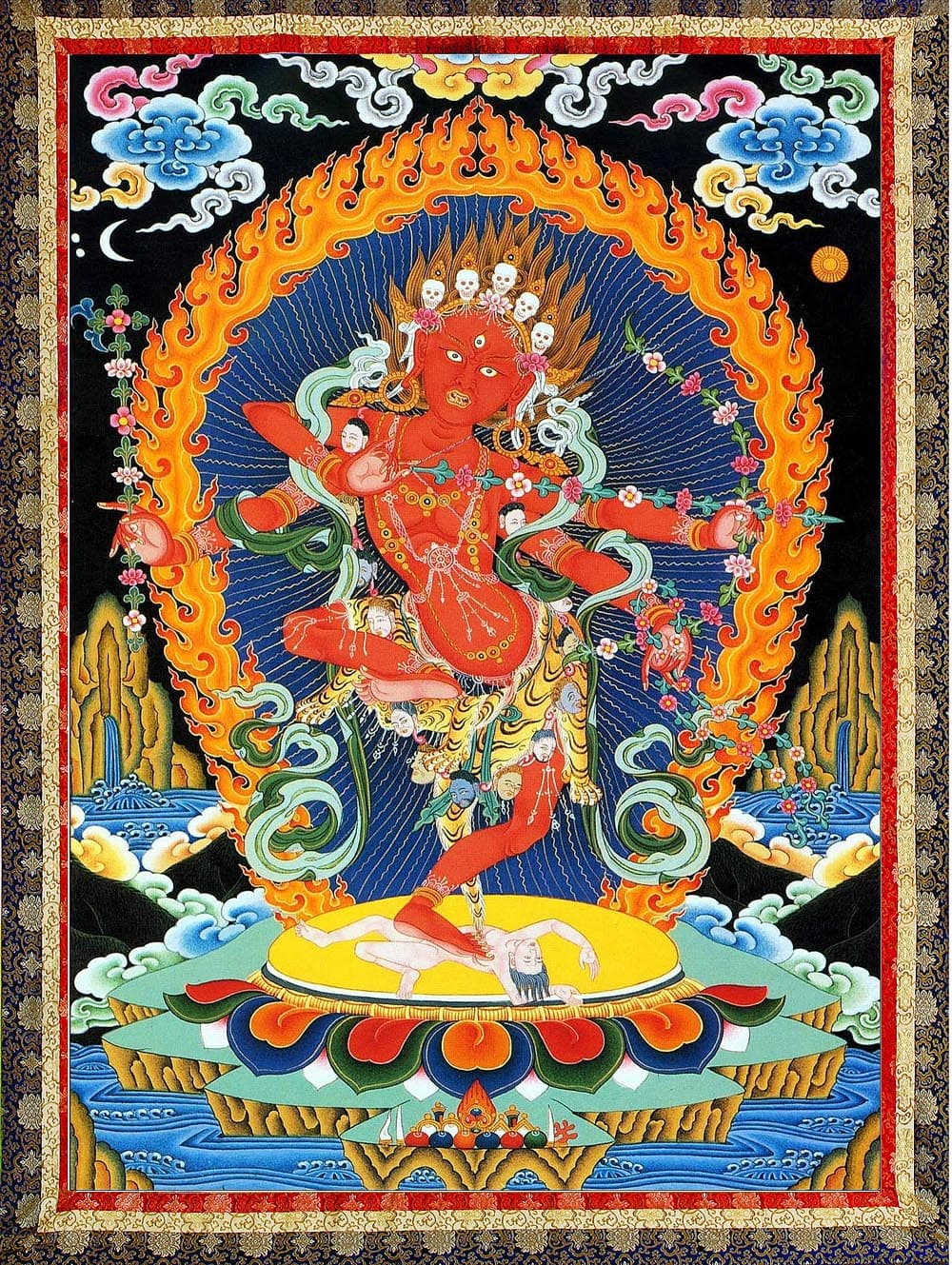 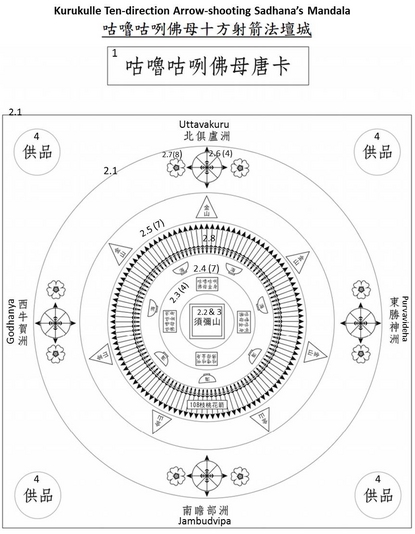 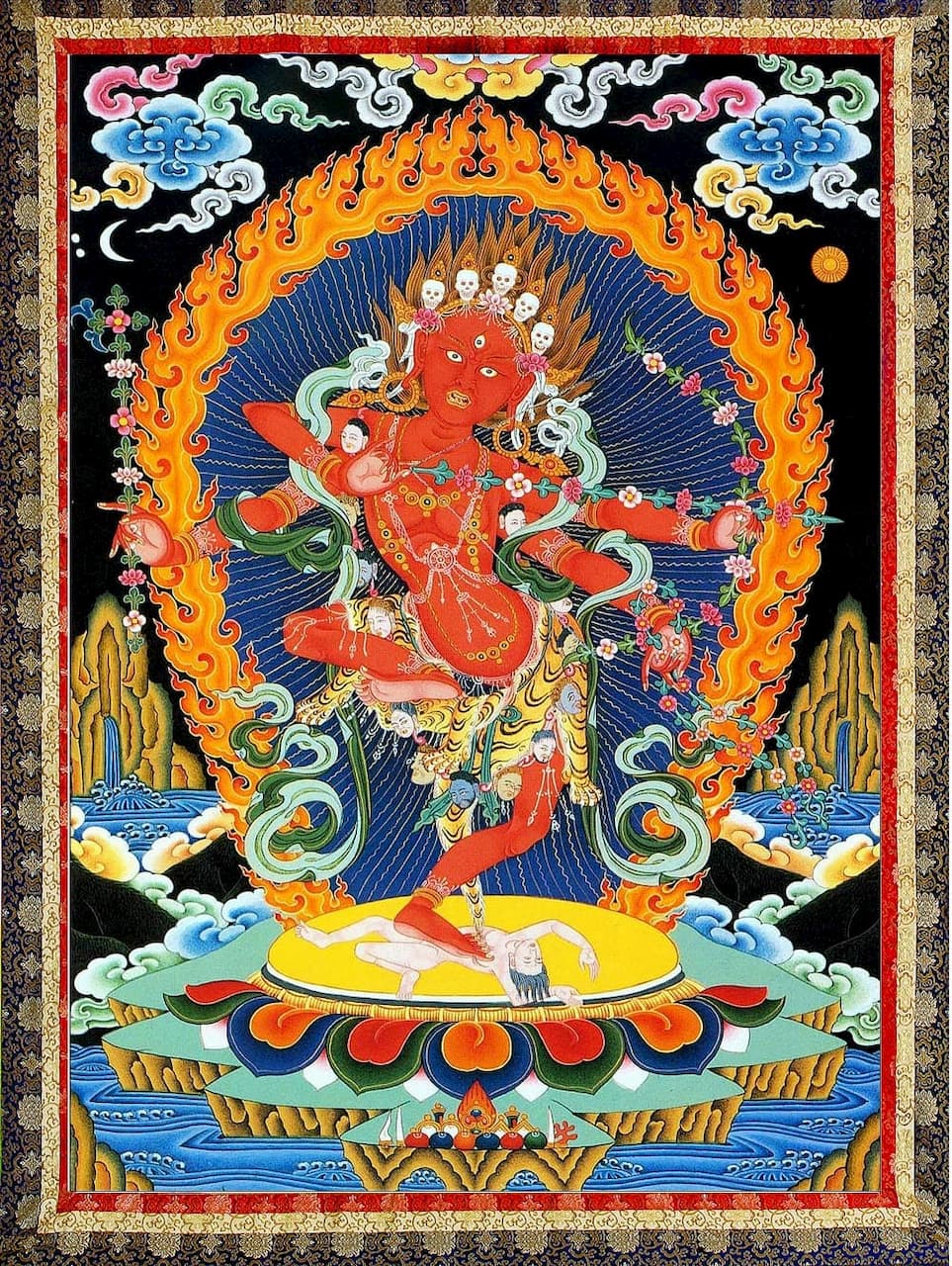