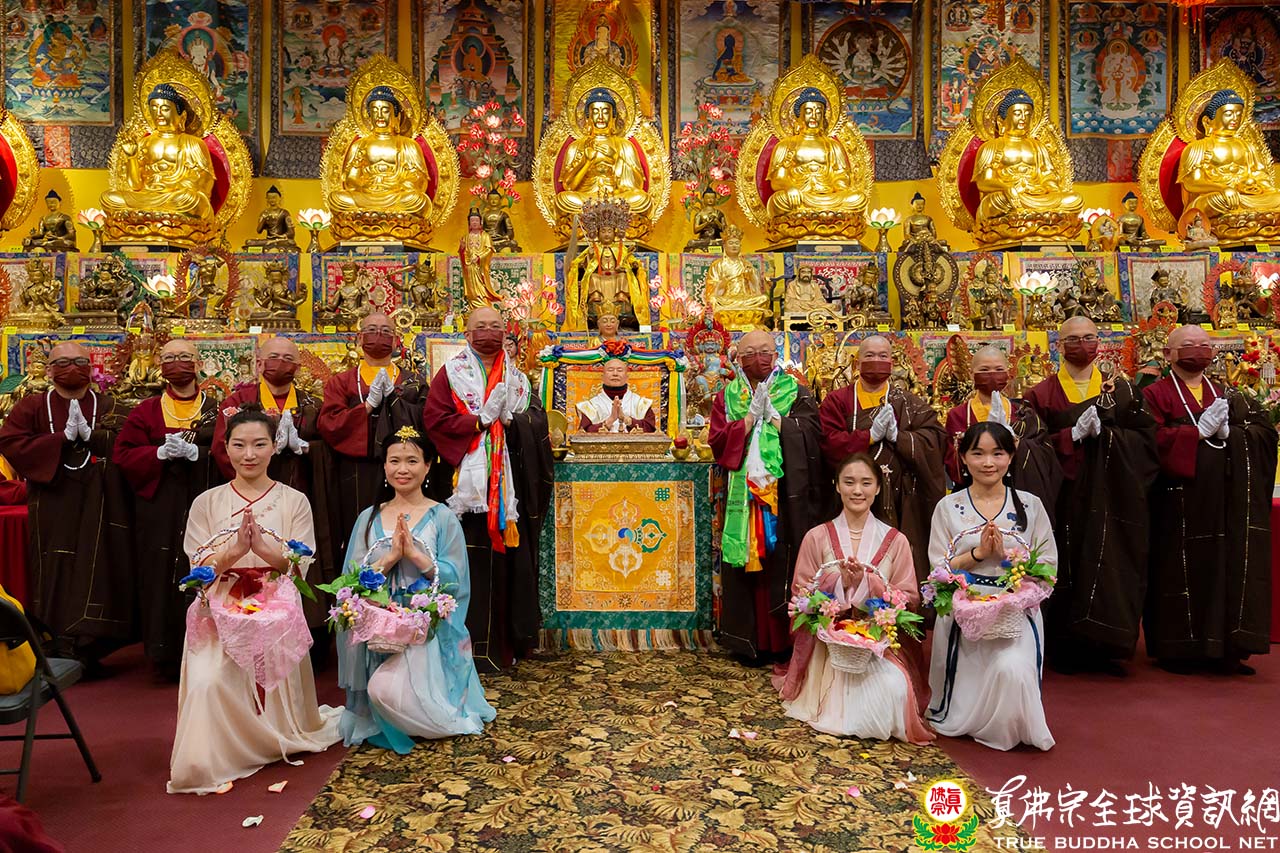 Just now, we had the dharma invitation ritual to request Grandmaster to expound on the Vimalakirti Sutra formally. There was also a dance offering of goddesses scattering flowers at the end. This is how it all came about. Many disciples asked me to continue expounding on sutras after completing my exposition on the Vajra Sutra. But there are numerous sutras spoken by the Buddha.

What is Tripitaka? Tripitaka, [a Sanskrit word] refers to The Three Baskets of the Buddhist Canon, or the Three Treasuries and Twelve Divisions.[1]

Are you well-versed in the sutras, the precepts, and/or the treatises? If you are not, you cannot be called a dharma teacher. “Dharma teacher” is an honorary title and is not something one gains from monastic ordination. But nowadays, it is customary to address monks and nuns as dharma teachers or reverends. I would still like to remark that it is only appropriate to call someone a dharma teacher or fashi when they know the dharma. The title “dharma teacher” has been downgraded now.

A week later, as I was thinking about which sutra I should expound next, the Great Master Vimalakirti entered my dream. He said, “Please expound on the Vimalakirti Sutra.” It was he who told me to expound on the Vimalakirti Sutra. I asked him, “Where did you come from?” He answered, “Grandmaster Lu, are you still that dumb?” I replied, “But I don’t know where you came from.” He then told me, “As long as your heart-mind is pure, I will be there.”

He indicated that he doesn’t come or go; he is where your pure heart-mind is. In other words, when your heart-mind is pure, he will be right there. This is a very important statement, so please remember!

Vimalakirti then said to me, “Grandmaster Lu, you should help me name this sutra.” I have read this sutra before, so I thought about it and said, “The Sutra of Vimalakirti Playing in the World.” Upon hearing it, he said, “That’s quite appropriate!” While living in this world, it was as if Vimalakirti was only acting in a play—like it was a game.

Calling it playing or games—which many people play nowadays—seems rather mundane. So, I suggested, “How about The Sutra of the Dharma King Vimalakirti’s Supernormal Transformation Power? What do you think?” He exclaimed, “Excellent!”

In the future, of so many different names, we shall call the Vimalakirti Sutra The Zero, Zero, Zero, Zero, Zero Sutra. This sutra was originally written in Sanskrit and was translated into Chinese by Kumarajiva.

Kumarajiva’s father was Kumarayana, a learned man from central India. He loved to travel and visited many countries. When he got to the Kingdom of Kucha, he met its king, who thought of him as a good spiritual companion with vast knowledge. Subsequently, the king asked him to marry his sister (Jivaka), and they had a son—Kumarajiva.

Kumarajiva was born with high intelligence and was ordained when he was seven years old. He was very talented and to express it in a Chinese idiom: “He could read ten lines at a glance and imprint them in his memory.” He had such a natural talent. After he became a monk, he lived like a sage.

At that time, it was during the reign of Emperor Fujian of the Former Qin Dynasty. According to China history, he mobilized eight hundred thousand troops to the south of the river to unify the entire central plains. One night, Fujian noticed a ray of light appearing in the West. So, Fujian asked a renowned astrologist, who did a divination and predicted that a very talented sage was rising in the West—referring to the Kingdom of Kucha. Thereafter, Fujian sent Lvguang to attack the Kingdom of Kucha. Kumarajiva was captured and brought to Changan. Later, he specialized in the translation of the sutras of Mahayana Buddhism. This is a little bit of history about the translator.

During the Tang Dynasty of China, the monk Xuan Zang went to Nalanda University in India to study buddhadharma; he studied Yogacara or Consciousness-Only, currently the doctrine of the Dharmalaksana School or the East Asian Yogacara School. Upon returning to China, he became well-known as the Master of Tripitaka Xuan Zang, belonging to the Yogacara Sect.

Kumarajiva first derived the meanings from the Sanskrit and expressed the meanings of the original text in Chinese. That’s why his translation is more readable and fluent. Alternatively, Xuan Zang translated word-for-word; this kind of literal translation does not necessarily translate the meanings. The results of the translations vary greatly. Before my exposition, I would like to mention the translators of the sutra so that you have some background.

Buddhadharma is truly unexcelled and unsurpassed. There is nothing more profound and higher than the buddhadharma. It really is the utmost!

I am now writing my 291st book; its title is The Supernormal Transformation of a Dharma King. In the prologue, I wrote about the Great Master Vimalakirti entering my dreams and our dialogues. This book contains anecdotes about the many insights and inspirations that Vimalakirti gives me every day. They are very meaningful, and I will scrupulously write them all in this book. This book is not about the content of this sutra. Instead, it is about the guidance and the insights that Vimalakirti has given me. The book is called The Supernormal Transformation of a Dharma King.

[1] Literal translation from the Chinese 三藏十二部.

Next discourse on the Vimalakirti Sutra: Discourse 1, 21 May 2022 - Chapter One—Buddhaverse

Previous discourse on the Vimalakirti Sutra: Introduction, 8 May 2022