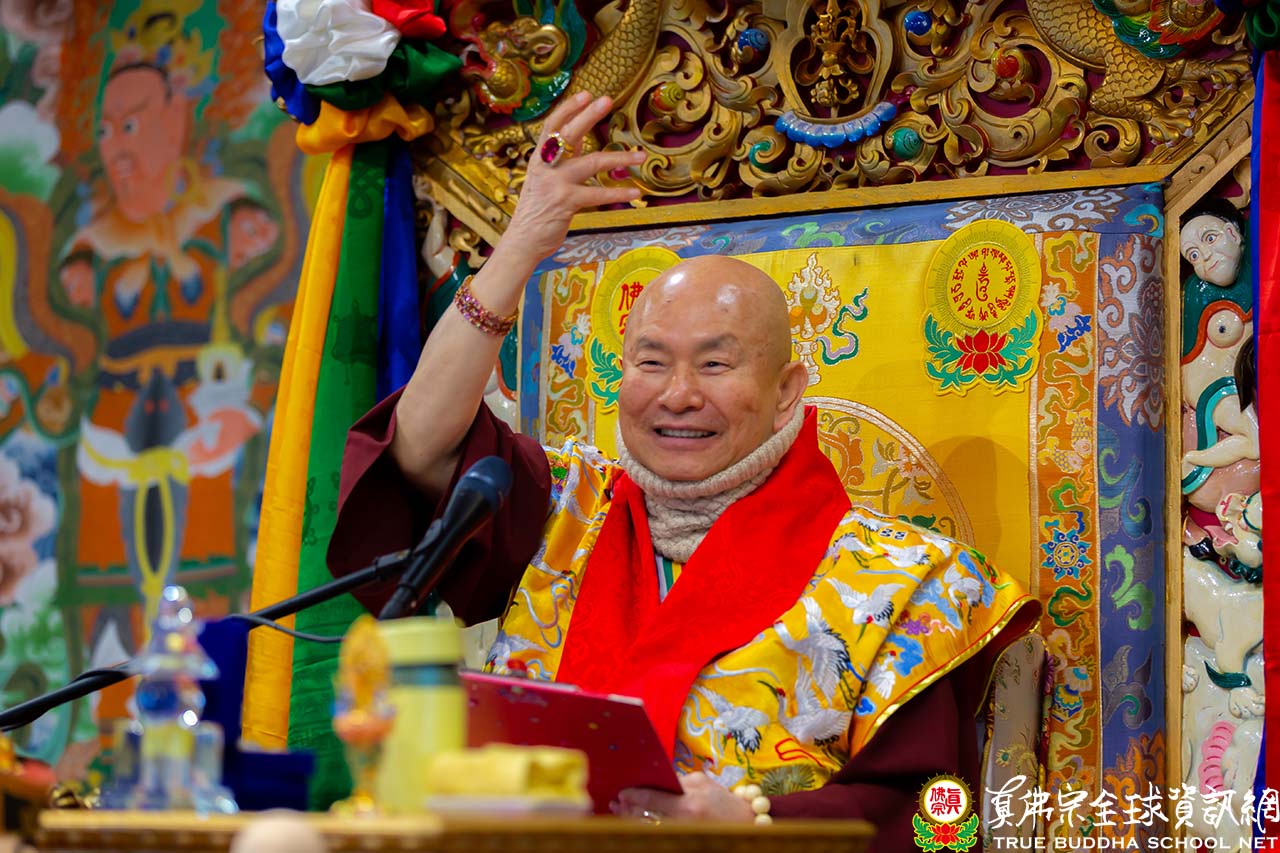 The Vimalakirti Sutra we will be using is the version translated by Kumarajiva from the Kingdom of Kucha. We need a copy for my exposition and please don’t print the wrong one as there are seven different Chinese translations.

Vimalakirti is a Sanskrit name; Vimala means ‘taintless’, ‘immaculate’, or ‘undefiled’; and Kirti means ‘named as’ or ‘famed as’. This sutra has many names, such as The Vimalakirti Sutra, The Inconceivable Sutra of Liberation, or The Sutra Spoken by the Taintless One.

Nowadays, for gender specification, we not only have “M” for male and “F” for female but also “X” for those who do not identify with the gender binary. They can be neither male nor female, or both male and female. Likewise, Vimalakirti can transform the appearance of a male or female back and forth.

What’s written in the Vimalakirti Sutra is amazing. The Goddess Who Scatters Flowers was a female, and Sariputra was a male. Sariputra, practicing arhatship, never gazed at women. When he met them, he would look down or close his eyes. But the Goddess Who Scatters Flowers was a great bodhisattva with powerful transcendent power and could transform anytime she liked. In contrast, an arhat is at the lowest level of the Four Sagely Realms. The goddess thought, “Oh, you don’t want to look at me?” So, she transformed herself to become Sariputra while transforming Sariputra to become her, exchanging places with each other. While Sariputra was looking down, he noticed that he had changed into a female. This is to break through the concept of gender differences.

The Goddess Who Scatters Flowers scattered flowers from the sky as an offering to the arhats, but all the arhats scurried to avoid the flowers because they didn’t want to be adorned. However, those flowers stuck to their bodies, and however hard they tried to get rid of them, they couldn’t.

The Goddess Who Scatters Flowers and Vimalakirti have such great transcendent power. They can transform men into women and vice versa and perform myriad transformations. Time and space do not matter to them. There is no distinction between the past, present, and future, and all the spatial dimensions merge into one.

A famous saying comes from this sutra, “Passing through a shower of flowers without any petal attaching.” Even after passing through numerous flowers and plants, blossoms and leaves, not even a blade of grass or a flower petal remains on one’s body and mind. This means there are no attachments whatsoever in the mind.

One time, Sakyamuni Buddha passed through a desolate wilderness, followed by his disciples. He said, “Let’s camp out here tonight.” “Staying overnight here?” The Buddha replied, “Yes! It’s a good place here; it has good geomancy.” But there was nothing around, not even a building or a shelter of any sort. “How can we possibly stay overnight here?” The Buddha assured, “There will be no problem at all.”

Sakyamuni Buddha also has transcendent power, and he invoked Lord Indra to descend. Lord Indra understood what the Buddha wanted, and he planted three clumps of grass in the wilderness, which instantly transformed into three big palaces for the Buddha and his followers to stay overnight. The next morning, after they left the palaces to continue their journey, they turned around, and all they saw were just three clumps of grass.

This is transcendent transformation [power]. When time and space do not exist, this is indeed very simple! In Buddhism, this is called Oneness Throughout the Three Times and Across All Ten Directions, referring to the non-existence of time and space. Therefore, Sakyamuni Buddha's buddhanature is omnipresent—he is everywhere! He appears anytime we invoke him.

Grandmaster shares a couplet that refers to the lack of time and space:

Time does not matter at a mountain lodge

On the [surface of the] lake, the sun and moon linger

The Vimalakirti Sutra is also widely loved by scholars. A few sayings come from the sutra, such as: Wine and meat pass through the intestines, yet the buddha stays in the heart; Passing through a shower of flowers without any petal attaching. Furthermore, many events mentioned in the sutra were unimaginable to the people of that period, such as an arhat that was transformed into a woman to “cure” his contempt of women. Topics such as men becoming women and vice versa had existed back then.

Vimalakirti had a wife—the Goddess Who Scatters Flowers, and he did not refrain from eating meat and drinking alcohol. Thus, the saying, “Wine and meat pass through the intestines, yet the buddha stays in the heart.”

Although Vimalakirti had a wife, ate meat, drank alcohol, living a mundane life, and did what ordinary people do, he remained taintless and uncontaminated. This is the meaning of the sutra—that there are no impurities or defilements. He viewed man and woman equally, so a man can become a woman and a woman can become a man, and they are interchangeable.

The arhats think that women are lesser and unclean, as it had been mentioned in the sutra that women have five kinds of leakages, and men are better and more precious than women. But in Vimalakirti’s view, men and women are equal and interchangeable. His view is contrarian, as he regards everything as one, and thus, everything is equal.

During the time of Sakyamuni Buddha, he initially allowed only men into his monastic sangha. No woman was ordained back then. The Buddha and the arhats don’t look at women. For example, when the Dragon Girl attained buddhahood, she had to transform into a male first before buddhahood, as they opined that only men could attain buddhahood. Inequality between men and women has been common.

However, as mentioned in the sutra, Vimalakirti treats men and women as equal. This sutra, indeed, is extraordinary. That’s why it is called The Inconceivable Sutra of Liberation. One of the intents of the sutra is to allow one to do anything if they can maintain purity in their heart-mind. The key issue is whether one can maintain one’s purity or not.

If one can, then one has attainment in their spiritual cultivation. If you are free from any clinging and are not entangled by any affliction or ensnarled by any thought—you are completely pure—then you have succeeded in your spiritual cultivation. As such, there is no taboo. You can do anything and whatever you do is pure. However, if you are not completely pure, then you cannot do just anything, and you must abide by the codes.

A simple example is when you go to the casino: are you always drawn to it, or have you become addicted to gambling? If you cannot control it, you are not pure, and you should not do it. However, if you go to Las Vegas, and you decide to spend, say, ten or at most fifty dollars, and when you spend it all, you stop, then you maintain your [detachment and] purity. You play the slot machine as if it is to exercise your arm’s muscles. In this case, you still maintain your purity, so it is okay to play. But if you’re drawn to it, then you have been tainted. Therefore, you should not go to the casino. That’s all for today.

Next discourse on the Vimalakirti Sutra: Dharma Invitation Ritual, 14 May 2022

Previous discourse on the Vimalakirti Sutra: Prologue, 7 May 2022