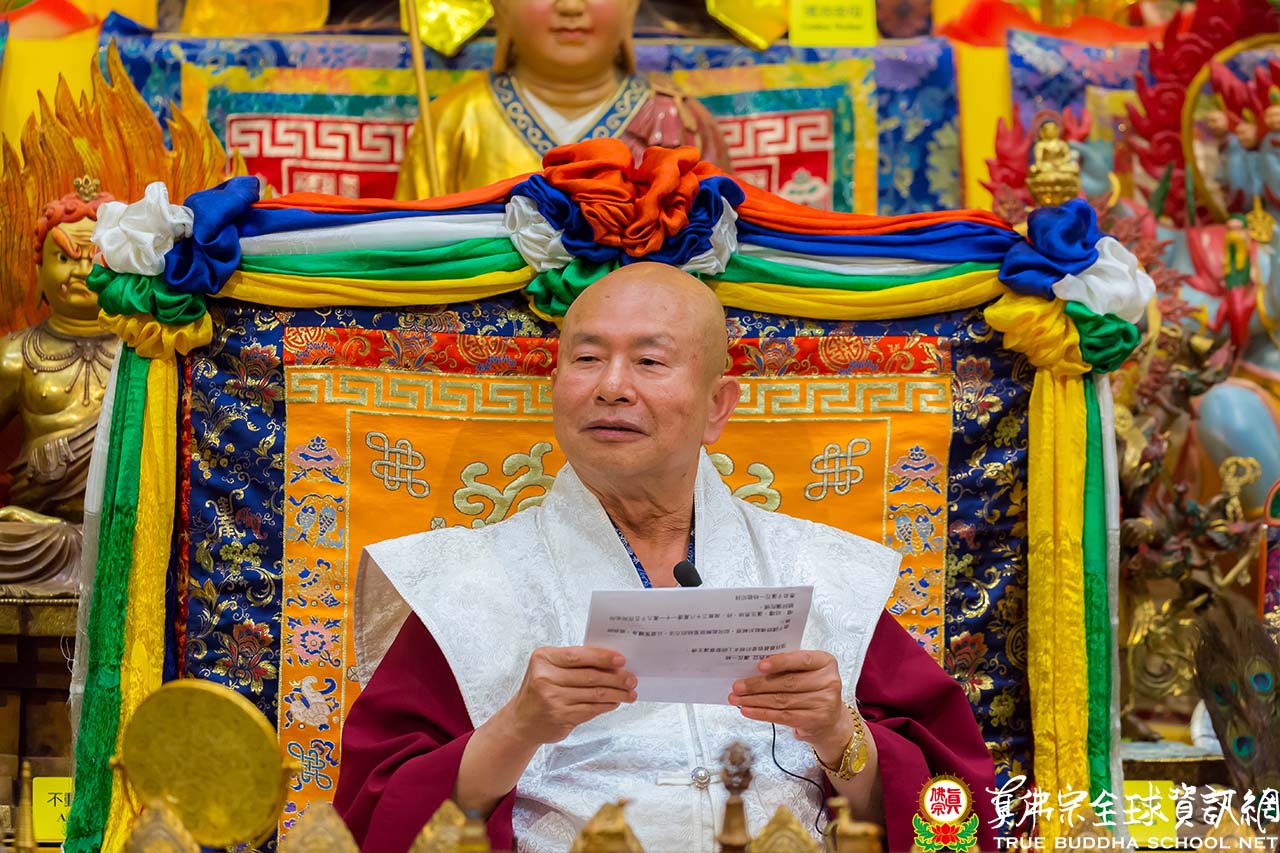 Three—The Right and Ultimate Meaning of the Great Vehicle

The Buddha told Subhuti, “All bodhisattvas should master their minds in the following way:

“Because if a bodhisattva holds a view of self, others, sentient beings and lifespan, then he is not a bodhisattva.”

Because if a bodhisattva holds a view of self, others, sentient beings and lifespan, then he is not a bodhisattva.

The past, present and future are all-in-one and intermingled together. Grandmaster can know about past lives and his own future lives. How can I know? Because I hold no view of lifespan [time]. Time simply does not matter. The concept of time was completely invented by human beings.

See? Saying I miss you every year, every month, every hour, every minute, every second. [in a joking manner] I miss you. These are words spoken between lovers, things I said in the past. [laughter] Whether I say it now or not, you’d never know. Every second I miss you. That’s quite farfetched.

Years, months, weeks, days, hours, minutes, seconds, were all determined by human beings. Inherently, there is no [concept of] time, there is no view of lifespan. That was specified by human beings. Who can calculate the “somber sky, terrene earth, and vast desolate universe” [a quote from the “Thousand Character Classic” poem to describe the beginning of a universe]? Who can calculate how long it has been?

If you cultivate spiritually until you attain the non-phenomena of lifespan, then you can easily go back and forth between the past, present and future. You can state all of whom you have been in the past. You can also state what you will be in the future. The Three Times—the past, present and future—are all-in-one, they are one time, and they are on the same time dimension. That’s the benefit of having no phenomena of lifespan.

On the non-phenomena of sentient beings,[1] there’s no concept of space. If I want to see you, I can find you wherever you are, I can go wherever I want; whether you are in Malaysia, Taiwan, England, France, Sweden, Iceland, North Pole, South Pole or anywhere else, I can go there because I have no [concept of] space. If you cultivate spiritually until you reach the realm of no space, the most incredible part is you can go to Sukhavati or any purelands or any buddha fields such as Avalokitesvara’s World of Omnipresence, Ksitigarbha’s Cuiwei Pureland, Amitabha’s Sukhavati, or Aksobhya’s Abhirati.

You can go anywhere. That’s when space does not matter. You will be there in a blink of an eye. You don’t need to waste time flying or riding on clouds or mists. No need to chant mantra to make a cloud descend and sit on it to go somewhere. No phenomena of sentient beings mean no spatial dimension. There are many more benefits, I’m telling you. No view of sentient beings, lifespan, others or self. That’s what Sakyamuni Buddha told Subhuti.

Now Chapter Four—Not-dwelling on Marvelous Conduct. [Grandmaster continued to extrapolate on chapter three before moving on to chapter four.]

Do you know that the Jokhang Temple and the Ramoche Temple each enshrines a statue of Sakyamuni Buddha? One is a life-size statue of an 8-year-old Sakyamuni Buddha, and one is a life-size statue of a 12-year-old Sakyamuni Buddha. The Jokhang temple was built for which princess? There were two princesses who went to Tibet to marry the local king Songtsen Gampo: the Princess Bhrikuti of Nepal and the Princess Wencheng of the Tang Dynasty. Which one did Princess Wencheng brought? The statue of the twelve-year-old. Princess Bhrikuti brought the statue of the eight-year-old. One is at Jokhang Temple and one is at Ramoche Temple, right?

How did the statues come about? One came from China and the other one from Nepal. Who carved them? Where did the materials come from? Do you know? No one knows. The materials came from Maitreya Bodhisattva, and they were carved by Viswakarma. Maitreya Bodhisattva gathered lots of his gold, silver and jewels and gave it to Viswakarma, who made them. Why are there statues of 8-year-old and 12-year-old Sakyamuni Buddha? Who knew how tall Sakyamuni Buddha was when he was eight and twelve?

Sakyamuni Buddha told Viswakarma to make an image of him when he was eight years old and twelve years old. But Viswakarma did not know his height when he was eight and twelve. Sakyamuni Buddha told him, “My wet nurse is still alive. She nursed me when I was young. She brought me to a place. You can ask her; she knows how tall I was when I was eight and twelve.” Viswakarma found the wet nurse and she told him, “Yes, I know. I nursed him at Kapilavastu City, at a pavilion there, there are two statues, one is shorter and one is taller. The shorter one is the same size as the 8-year-old Sakyamuni Buddha and the taller one is the 12-year-old. You can go measure them.” That’s how Viswakarma knew about the heights.

Grandmaster knows all these things from the past. How can one know? These things about the statues of 8-year-old and 12-year-old Sakyamuni Buddha, how could one know the story behind it, about their measurements and appearances? How could this be?

The likenesses of Subhuti, Sariputra, Moggallana and Ananda, four of the Buddha’s chief disciples, were carved behind these two statues. How come it lacked Mahakasyapa? Because Mahakasyapa has left the sangha. He had arguments with Ananda, so he wanted to leave the sangha. Sakyamuni Buddha made him stay and tried to keep him in the sangha, “Don’t leave.” But he said, “It’s hard for me to accept the way you live and clothe so extravagantly. I’m first and foremost in monkhood cultivation; I still follow the Sound-Hearer’s way.”

This is the discourse for today on the Vajracchedika Paramita Sutra. Tomorrow we will start on Chapter Four—Non-dwelling in Marvelous Conduct. Do we have a Vajra Sutra discourse tomorrow during the annual grand ceremony? [“It’s up to you Grandmaster.”] It’s up to me? Tomorrow is the grand ceremony, right?

Let me share a couple of jokes. Oh, let me tell you, what I’m telling you today are all secrets. Don’t tell anyone, okay? [laughter] Nobody knew this. It’s necessary to not have the view of sentient beings and lifespan to know. They all know there are statues of the 8-year-old and 12-year-old Sakyamuni. But the origin? Who were carved behind the Buddha’s statues? Only Grandmaster knows. Nobody else knows.

Last time I was talking about buddhist disciples who breach the precept of undermining if they don’t come to listen to their guru’s dharma teaching. However, now is an exception due to Covid-19. If you don’t come for the dharma teaching because you are afraid of the coronavirus, that is understandable. Maybe you’re scared of gathering, you are worried about getting infected, right? During the pandemic, there are many rules and large gatherings are not allowed, so now it is not considered a breach.

Although you cannot make it in person but if you watch over the internet, on cellphones or computers, etc. then you don’t violate the precept. When Grandmaster gives dharma teachings, yet you intentionally do not come even when you can, then you’re violating the undermining precept. 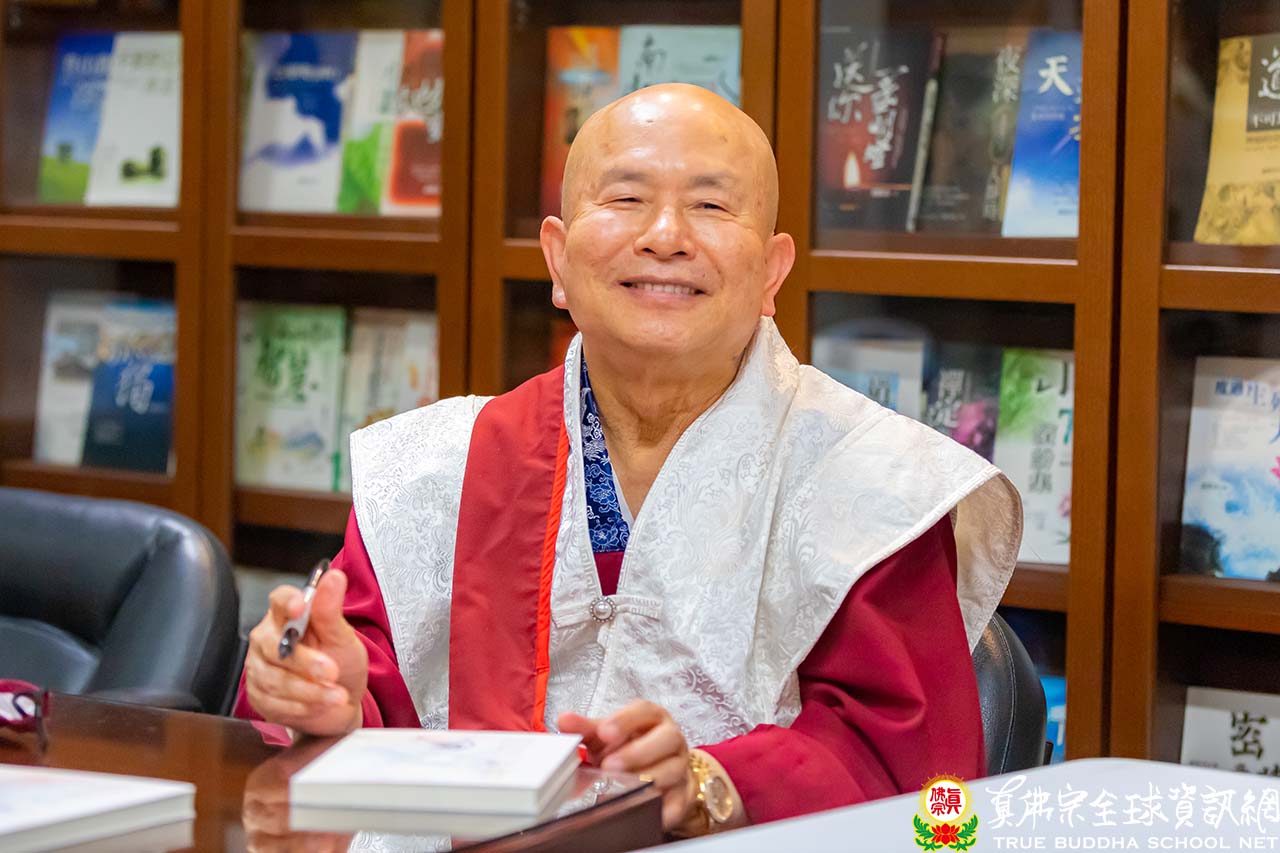 [1] Grandmaster clarifies that “sentient beings” refer to not only living beings, but all physical existences, including all the material things that exist in the spatial dimension. Therefore “sentient beings” here refers to the “space dimension.” Space is the imaginary context in which objects exist.

Next discourse on the Vajra Sutra: Discourse 13, 5 September 2021 - Chapter Four—Non-dwelling in Marvelous Conduct