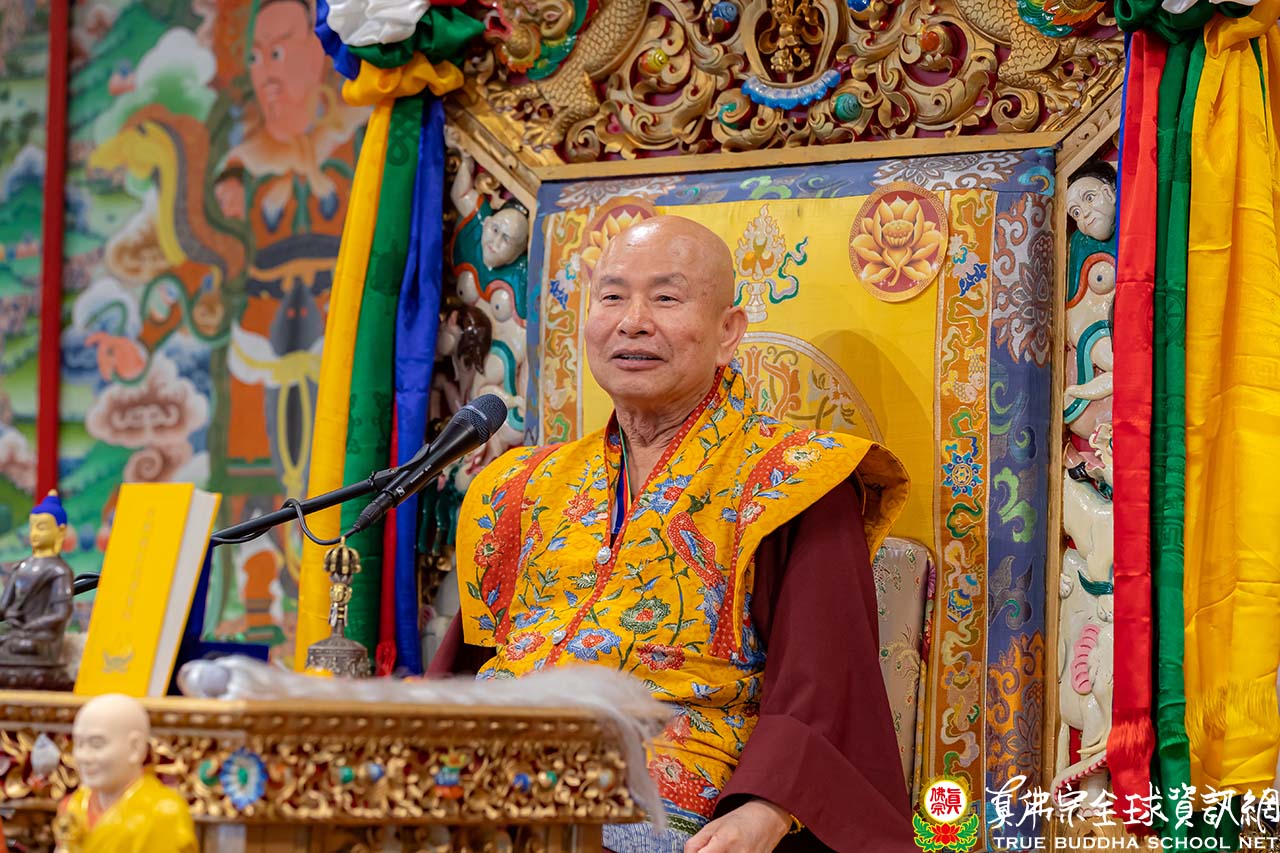 Now, we will discuss further regarding the elder Subhuti, as in the excerpt:

At that time, the elder Subhuti was present in the assembly. He arose from his seat, bared his right shoulder, knelt on right knee and with his palms joined respectfully bowed and addressed the Buddha saying: “World Honored One, the Tathagata sublime mindfulness and entrustment to the bodhisattvas is indeed extraordinary.

The Buddha said, “Excellent Subhuti, as you said, the Tathagata is mindful about the bodhisattvas and entrusts the bodhisattva. Now listen carefully, while I tell you how the mind of good man or good woman should abide when they strive for perfect enlightenments of anuttara samyaksambodhi and how they should master their minds.”

“Wonderful indeed is your teaching, World Honored One, I will pay heed to what you say.”

You should understand this excerpt readily, it is about the questions asked by Subhuti. This is quite clear, right? I do not need to explain further. Let me elaborate briefly on Subhuti instead.

Subhuti was born with high intelligence, but he still carried the seed of hatred and anger from his past lives. Therefore, Sakyamuni Buddha first taught Subhuti the paramita or perfection of endurance. The meditative concentration that Subhuti attained is the samadhi of non-contention, then he attained the samadhi of emptiness.

In his dharma propagation, the Buddha visited the village where Subhuti resided. Subhuti had heard that the Buddha was a very wise person, though Subhuti also considered himself possessing a high level of wisdom. When the Buddha discoursed the dharma, Subhuti was standing at a far distance, listening.

Subhuti heard this from far away and joined his palms with reverence. What Sakyamuni Buddha said about no differences between self and others really resonated with Subhuti’s heart. When the Buddha returned to his residence, Subhuti paced back and forth right outside the Buddha’s door. Sakyamuni Buddha knew about it and invited Subhuti to come in. They had a dialogue and connected right away; they had great affinity. Where did the affinity come from?

The affinity originated from the time when Subhuti was a poisonous snake and captured by the bird garuda. While they were flying in the sky, they passed by Sakyamuni Buddha who was sitting halfway up the mountain. The snake asked for the Buddha’s help and nodded his head to the Buddha. By asking for help or praying to the Buddha, he created an affinity. This is where the affinity originated. That is why affinity or causes and conditions are extremely important.

There are many people coming from faraway places pleading me to solve their sicknesses. If I feel there is no dharma power flowing when I extend my hand, then I know this person does not have affinity with me and it is impossible for me to cure their illness. No matter what I do, I would not be able to help them as the affinity is too shallow.

But for those with affinity, miracles occurred. Elizabeth [one of the visiting disciples] is here now and she has affinity with Grandmaster. When she visited Seattle [in 2014], she had a tumor inside her brain as shown in the MRI and X-Ray results. The night after meeting with Grandmaster here, she had a dream of Grandmaster becoming a surgeon, wheeling her into an operating room, opening up her brain and taking the tumor out, leaving just a little bit of skin residue behind. In the dream, I told her that I took out her tumor and there was only a little bit of skin left.

She dreamed of Grandmaster operating on her brain, inside her skull. Did you feel pain? [Grandmaster asked Elizabeth] No. [Elizabeth answered]. Surgery in the dreams is not painful, but in real life, do you want to try? [laughter] With anesthesia you might not feel the pain and in the dreams too, you do not feel anything. The night passed; Elizabeth saw the surgeon was Grandmaster [referring to himself], but I am not a surgeon, I never studied medicine. [laughter] I do not even dare to kill chicken, but my mom did. She beheaded them while chanting: ”chicken, chicken, your life is endless suffering; Let me help you get a new life.” Cut! [spoken in Taiwanese with laughter].

I operated on Elizabeth’s brain in the dream. I do not dare to use a knife in real life, but I dare to do that in the dream. No more pain left [in Elizabeth]. When she went home to Indonesia and had medical check-up, the doctors found that the tumor disappeared and there was only a piece of skin left. All of this is due to affinity. I was able to help her because of affinity, and she was cured because of the surgery in her dream.

To take refuge in the Buddha, like Subhuti, one needs an affinity. Subhuti’s affinity was created when he pleaded to Sakyamuni Buddha for help when he was a poisonous snake. Having this affinity, he encountered and took refuge in the Buddha in his subsequent life. The Buddha knew about his past lives and talked openly about it, that Subhuti carried hatred and anger in his heart. The Buddha wanted to alleviate his hatred by teaching him to practice the paramita of endurance. He eventually attained the samadhi of non-contention and achieved the realm of unborn endurance, which is a very high-level spiritual realm.

It is not easy to reach that realm, very difficult indeed. Just like when a chicken feather tickles your nose, you would itch. Due to a few words spoken by someone, you would immediately feel upset. Not to mention fighting. If a couple fights, the marriage is broken. A couple should not fight. As soon as fights happen, it would be imprinted in their hearts, then anger and resentments would arise. You must not rebuke or speak harshly either. If you speak angrily and yell at someone, saying, “Didn’t I tell you already to do it this way?! Why didn’t you do it?” They’ll feel indignant and become even more rebellious, thinking, I will never do it your way!

Have you heard of this [joke]? The husband constantly scolded his wife, and she always argued back at him. One day she stopped arguing. The husband felt strange and noticed his wife’s behavior has changed, thinking to himself, this is a good thing; but how come she is not arguing anymore? Instead, she would take a toothbrush and clean the toilet every time he rebuked her. So he asked her, why did she brush the toilet every time he scolded her? She replied, “oh, I am using your toothbrush to clean the toilet.” [laughter] So she still carried resentment and revenge within her.

We need to understand that in spiritual cultivation; what do we cultivate? We need to know how to endure, that is spiritual cultivation. But if you cannot endure, you are a kindergarten baby. You do not know how to be patient; many disciples do not know how to endure at all. Under the same roof, you still fight with each other. You are fellow disciples taking refuge in the same guru, yet you still fight with each other; you argue and denigrate each other.

Learn from Subhuti! He practiced the endurance paramita and he returned everything to emptiness. He discarded all the garbage from his heart and mind. Why do you keep garbage inside you? What for? Throw them out, empty your heart and mind. Nothing is the matter. But if you do not empty your heart and keep the garbage inside it, it would start to rot; not just ferment but you would go crazy from it. [laughter at the rhyming Chinese words.] When you are holding anger inside yourself, you are angry at yourself. That’s foolish and really stupid. Instead, you should have mastered the endurance paramita.

Today, Grandmaster is teaching you to learn from Subhuti, the perfection of endurance. Empty yourself, discard all your garbage, empty your mind until nothing is the matter. Empty it until nothing exists. You will be at peace and at ease!

If instead, you keep garbage inside yourself, then the garbage would rot and become toxic and poisonous. You might not get Covid-19 but you will die from your own poison and toxin. [Laughter] No one here has Covid, because had anyone have it, we would all have run away. [Everyone is laughing].

In such case, your heart has been poisoned to death. Because you have the seeds of anger and hatred, you will be born in places where poison and toxins exist in your future lives. Today you have heard this, Subhuti was the one who practiced the perfection of endurance and attained the samadhi of non-contention.