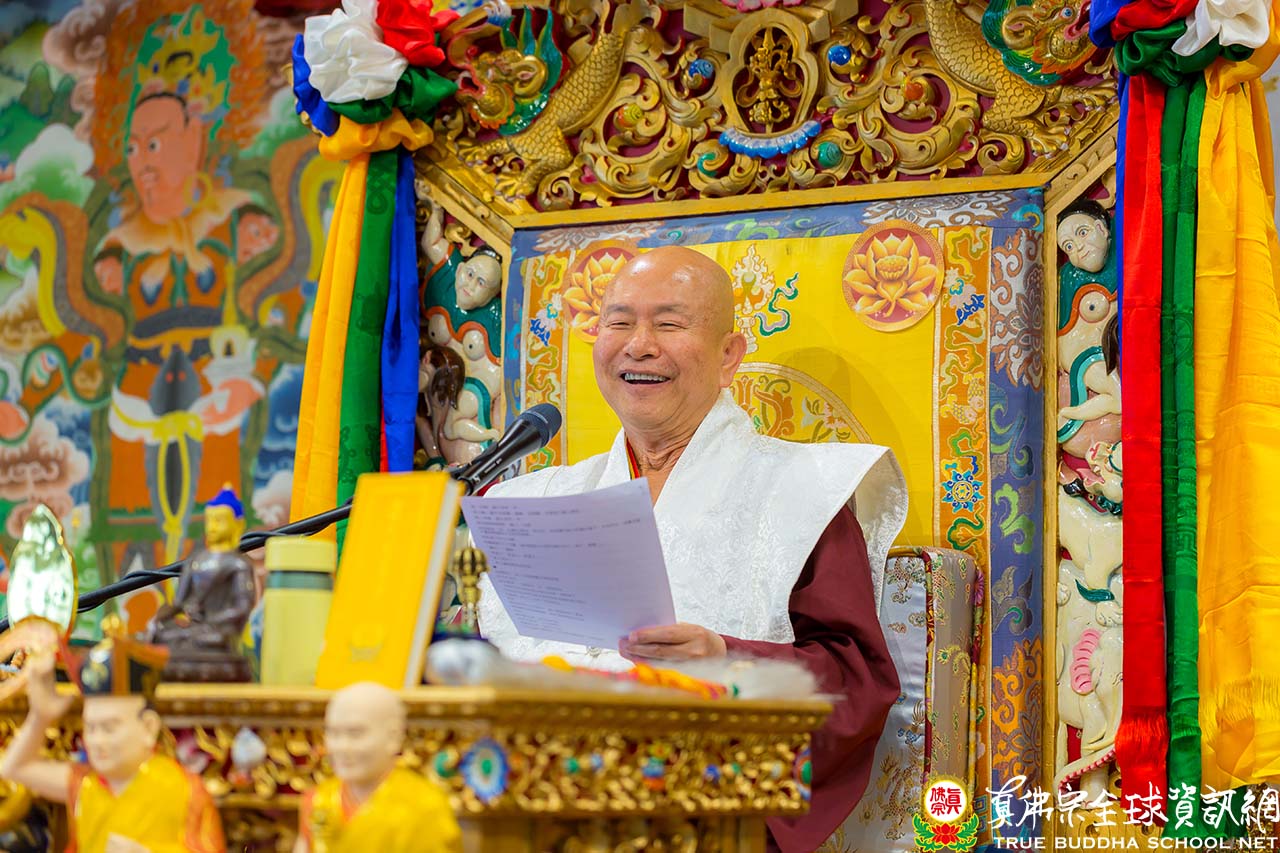 Today, we will talk about the Vajracchedika Prajnaparamita Sutra.

Chapter One—The Setting of the Dharma Teaching. There are certain conditions for the Buddha to speak on the Vajra Sutra. First, there should be a main actor, the speaker—Sakyamuni Buddha. Second, there is the audience or more importantly, a requestor—the person asking questions. Most of the sutras spoken by the Buddha were in the form of answers to questions from his disciples. A disciple would ask a question and Sakyamuni Buddha would explain. That’s how the sutras came about.

The first person asking was Subhuti, he was the second actor. The location was Anathapindika Monastery at Jetavana, one of Sakyamuni Buddha's three main abodes; the other two were Venuvana Vihara (Bamboo Grove Monastery) and the caves at Vulture Peak.

The sutra originated from someone asking questions. Who was asking? Subhuti. Why Subhuti? Because it’s the Vajracchedika Prajnaparamita Sutra. Subhuti was one of the ten chief disciples, and he was foremost in the comprehension of Empty Nature; therefore, he was the one asking questions. The disciple with the foremost wisdom was Sariputra. The disciple with the greatest supernatural power was Moggallana. The disciple who best comprehended empty nature was Subhuti. It was mostly Subhuti’s questions that Sakyamuni Buddha answered.

There were causes and conditions for each ceremony and gathering; this included the speaker of the sutra, the audience, location, people, time period and its journey or process. That is what’s described in Chapter 1 of the Vajra Sutra, The Setting of the Dharma Teaching—people, location, questions and answers, the whole process of the questions and answers, the time period, and the setting, which was Jetavana Grove.

Sakyamuni Buddha once traveled to Trayastrimsa Heaven to discourse the Ksitigarbha Sutra to his mother, Queen Maya and disappeared for a period of time. Uppalavanna was the most beautiful nun in the sangha. Because she was beautiful, she caused many shaven-headed monks to run away with her. When the Buddha returned, she was the first one that ran to the Buddha and said, “I’m the first one to greet you on your return.” Sakyamuni Buddha said, “No, it wasn’t you.” She replied, “I got here first! Why are you saying it wasn’t me?” Buddha said, “Somebody else got here first.” She said, “No, I was the first one.” Uppalavanna said, “Why do you say there was someone else? I didn’t see anyone. I’m the first one to greet Sakyamuni Buddha on his return.” The Buddha said, “There was another person before you. That person was Subhuti.”

Because Subhuti knew that Sakyamuni Buddha was about to descend from Trayastrimsa Heaven, he was first to greet him on his return. He stood up but he sat back down; instead, he used his mind to greet the Buddha. It is called sitting in meditation. Sakyamuni Buddha knew immediately that Subhuti was the first one to greet him, having welcomed him back in an intangible way. Uppalavanna only welcomed him back physically. Subhuti, however, was first.

There were two actors: Sakyamuni Buddha, the speaker and Subhuti, the requestor who was asking questions. Because of these two actors, we have the Vajra Sutra. That’s Chapter One—The Setting of the Dharma Teaching.

Today, we will just discourse Chapter One—The Setting of the Dharma Teaching, it must have location—Jetavana Grove, the audience, the questions asked by Subhuti, Sakyamuni Buddha’s answers, what went on, the size of the audience present at Jetavana Grove and the time period, which was over 2600 years ago. It occurred in Sravasti, India at Jetavana Grove. There’s the time period, location and audience, this is how the sutra came about. These are the causes and conditions of the ceremony.

Most people in explaining the sutra would just read it as:

Everybody can understand these words, but there are deeper meanings behind these words, so please don’t take them too literally. I will need many days to explain these meanings. The words are clear, and you can understand them, right? At that location, everybody went out on the almsround and came back. After Sakyamuni Buddha and the monks finished eating, they washed their feet and heads, took a bath and then the Buddha rose to the dharma seat.

It seems simple but it’s not that simple. There are deeper meanings. Think about it. This was the daily routine of Sakyamuni Buddha. But there is a profound meaning behind it. What is it? Think about it. You will know more about this after I discuss it next Saturday.

What’s written here? It seems simple. The location, his many followers of 1,250 people and they went out for alms. They came back and ate. Afterwards, they put away their robes and bowls and washed their feet, then Sakyamuni Buddha sat on his dharma seat. That’s it, right? Very simple. That’s all, right? No. There are many profound meanings within this that you are not aware of. Next Saturday, I will discuss more on this. Wait for it.

Next discourse on the Vajra Sutra: Discourse 4, 7 August 2021