True Buddha School is a sect suited to teach Enlightenment「開悟」

It has been said, ``Human incarnation is hard to come by and Buddha-Dharma is hard to obtain`` 「人身難得、佛法難求」- a Buddhism proverb which pertains to the current Evil World with Five Defilements (五濁惡世). Only the words spoken by a genuine Buddha-Grand Master Lian-Sheng, by His Dharma exposition, which is likened to an immaculate current of Dharma, people`s mind can thus be purified in the midst of this chaotic and muddled world. Those who believe in Him shall be emancipated from pain and suffering and thereby gain happiness. January 16th of year 2010 was another weekend group cultivation at Ling Shen Ching Tze Temple. Afar had come numerous True Buddha disciples who were very fortunate to be able to listen to the teachings of an Enlightened Sage-Grand Master Lian-Sheng. The group cultivation was ministered by Acharya Master Lian-Ning (蓮寧金剛上師) who was lately authenticated by Grand Master to be the enlightened ``Great Purple Lotus Padmakumara.`` The group cultivation was on ``Padmakmara Principal Deity Yoga`` practice 「蓮花童子本尊法」.

After the cultivation ended, Dharma Instructor Lian-Wan said in his exposition that True Buddha School is a very unique sect whose Lineage Root Guru is a genuine Buddha; if the practitioner was to diligently practice True Buddha Tantric Dharma, he or she shall be able to enlighten the mind and discern the Buddha Nature over time. Next, Achary Master Lian-Ning started off his exposition by conveying gratitude to everybody, especially to Grand Master, White Dakini Deity and multitude of Buddhas and Boddhisattvas for Their blessings. He also thanked Grand Madam (Shrmu) for her tending cultivation of him. He affirmed that his accomplishments, enlightenment, etc. are all attributed to the personal instructions and blessings of Grand Master, the Root Lineage Guru. The Acharya Lian-Ning elaborated that the tenet「Honoring the Guru, treasuring the Dharma and practicing diligently」 is inclusive of all Tantric Dharmas within Tantrayana Buddhism. He encouraged all practitioners to be intent on ``Practicing with full sincerity,`` and to treat all mundane affairs with a ``non-abiding mind.`` Even though he is an enlightened person, he still endeavors to adapt his own mind till a rapport is reached between the subjective and objective aspect. The ultimate attainment of discerning the true Buddha Nature within oneself is the utmost importance.

Thereafter, the King of Dharma, Grand Master Lian-Sheng continued on with His discourse on the book, ``The Altar Sutra as Spoken by the Sixth Patriarch.``The Sixth Patriarch elaborated in the section on``Prajna``: ``This step is taken lest ignorant persons who can not understand our system should make slanderous remarks about it and thereby annihilate their seeds of Buddha Nature for hundreds of Kalpas and thousands of incarnations. Learned Audience, I have a `Formless` Stanza for you all to recite. Both laity and monks should put its teaching into practice, without which it would be useless to remember my words alone.``

Before Grand Master expound the excerpt from the book, He made an announcement that He had authenticated an ordained disciple, Dharma Instructor Lian-Dien (蓮店法師), who is an incarnate of ``Great White Lotus Padmakumara``「大白蓮花童子」; she was from Taiwan and has been a director of Fah-Ming True Buddha Chapter「法明同修會」and Tsen-Zhi-Gu-Yue Dance Theater「晨之古月舞蹈劇場」. She will be receiving the empowerment of Acharya Mastership. Grand Master then continued expounding the excerpt: The main emphasis of the excerpt is on ``Formlessness`` 「無相」. All phenomena in human existence have a beginning and an end which all amount to zilch and is therefore defined as ``Formlessness.`` The ``Formlessness`` includes the ten phenomena of human existence, namely form, sound, odor, taste, touch, manifesting, abiding, annihilating, male and female. The real state of enlightenment is not only about Formlessness for it is only a metaphoric manifestation of enlightenment. A truly enlightened disciple is psychologically immune to the feeling of being mistreated, insulted or slandered. True Buddha School is suited to teach enlightenment because the sect is endowed with a genuinely enlightened Lineage Root Guru, who is there to guide the disciples to enlightenment. True Buddha School therefore is considered an invaluably unique sect. Grand Master even compassionately implored the blessing of antecessor Acharya Masters, acceptance of Principal Deity and permanent presence of Dharma Tutelars for the good of the whole sect and all sentient beings.

Since Grand Master has been very concerned about the disastrous aftermath of the earthquake in Haiti, Dr. Foching Lu Esq. (盧佛青博士), the Director of Sheng-Yen Lu Charity Fund Foundation 「盧勝彥佈施基金會」made an announcement at the end of Grand Master`s exposition, detailing the disastrous conditions in Haiti and even preemptively contributed twenty thousand U.S. dollars in the name of Sheng-Yen Lu Charity Fund Foundation to the cause of the disaster relief. Dr. Foching Lu Esq. even appealed sobbingly to all participants to call forth compassion and carry through on the pledge to help save the trapped and buried victims underneath the heavy rubbles desperately awaiting rescue.

Afterwards, numerous devotees waited in line for the compassionate Grand Master to autograph the newly published book ``Shoot an Arrow to the Sky.`` All were grateful of Grand Master for the compassionate and invaluable bestowal of Refuge Empowerment on new initiates, for blessing the Great Compassion Dharani water and for sanctification of Buddha statues and effigies. On His way out, Grand Master, in spite of all the toils, even bless empowered all kneeling devotees along two sides of a human aisle by palming their heads. Everybody had his or her new book autographed; all had been blessed satisfactorily by Grand Master and returned home from this rewarding journey. 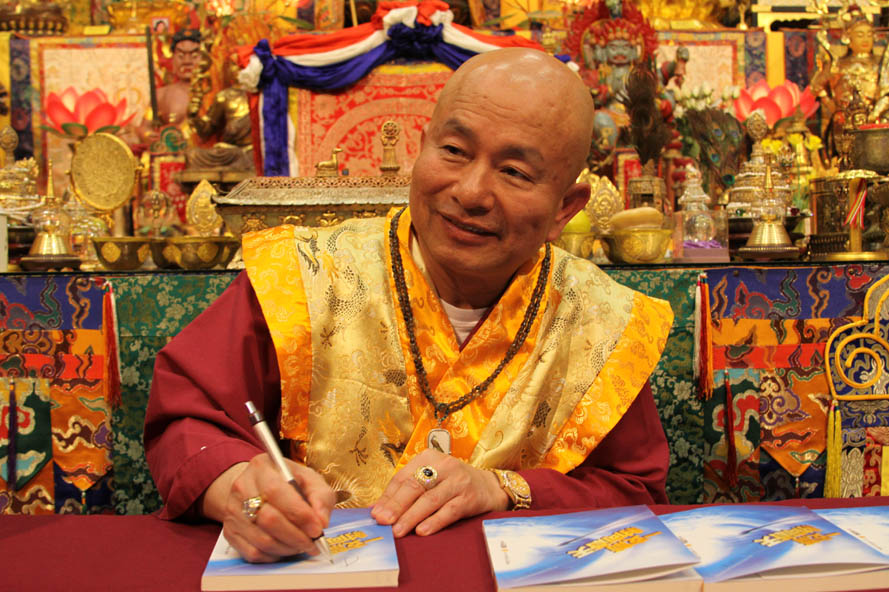 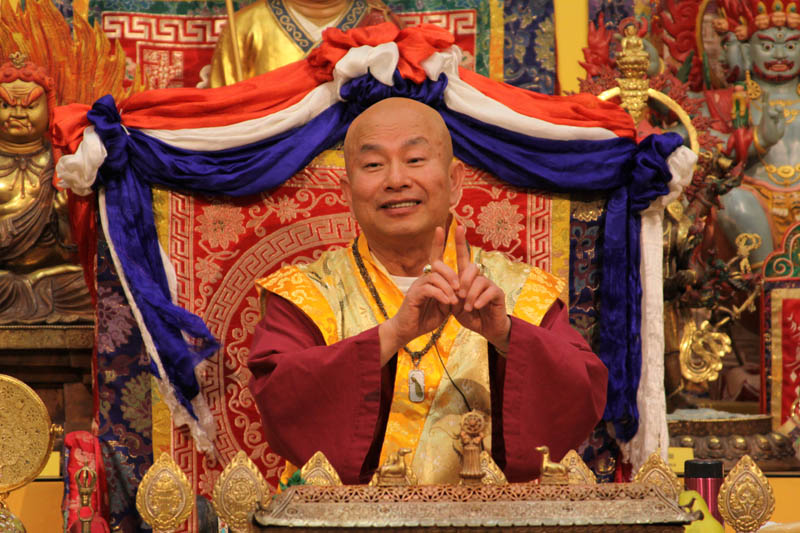 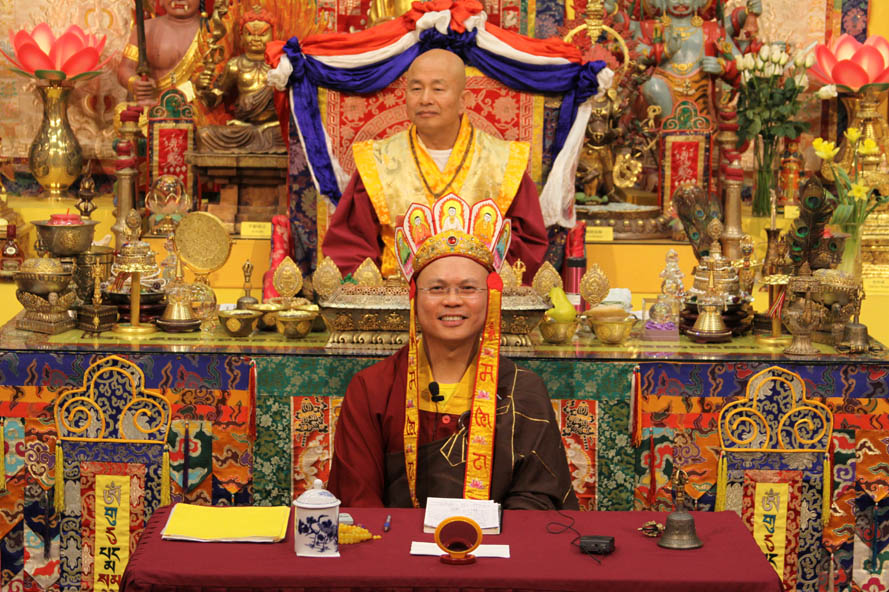