As temperature dipped low to 3 or 4 degrees Celsius outdoor, the moon hung bright against the darkish, clear background of the evening sky. The fervor of True Buddha disciples on a pilgrimage from various areas of the world had warmed up metropolitan Seattle to the boiling point, figuratively speaking. All the attending disciples waited patiently with pious anticipation till 8:00 p.m. in the evening when Grand Master mounted the podium and seated Himself in the Throne of Dharma King; the group cultivation started immediately upon Grand Master`s sitting.

The evening group cultivation of January 23rd of 2010 featured the practice of Bhasjyaguru Principal Deity Yoga「藥師琉璃光王佛」, which was ministered by Acharya Master Lian-Huo (蓮火金剛上師) and presided over by Grand Master. After the cultivation, a Dharma exposition was first presented by Dharma Instructor Lian-Qing (蓮晴法師): On surveying the recent calamities that occurred worldwide, the only way to effectively emancipate from the confine of life and death and vexations is to ``Purify One`s Own Thought`` (自淨其意). Next Dharma exposition was presented by Acharya Master Lian-Huo (蓮火金剛上師) on the subject of ``Eight Sufferings in Human Existence`` (人生中的八苦) as taught by Sakyamuni Buddha. He also elaborated that the only way to liberate oneself from numerous sorts of crisis and suffering is to cultivate oneself in Buddha-Dharma/Tantric Dharma (修行). Through True Buddha School`s Tantric Dharma, one can learn to understand profoundly that human existence is full of pain and suffering whereby one would motivate oneself to recite the epithet of Buddha, to recite mantras, to cultivate oneself in Buddha Dharma and to discipline one`s own mind, hence effectively changing one`s own destiny.

Finally, Grand Master was greeted with warm applause to present His Dharma exposition. Grand Master then continued on with His discourse on the book, ``The Altar Sutra as Spoken by the Sixth Patriarch,`` specifically on the first twelve lines of ”The Formlessness Stanza”:

Discernment by speech and by mind,
Like the sun whose place is in space,
Pass along nothing but the Dharma for realising Essence of Mind
Appear in the world to destroy false doctrines
We can hardly classify dharmas into ”sudden” and ”gradual,”
But some men will attain enlightenment quicker than others.
For example: this system for realising Essence of Mind
Is beyond the comprehension of the ignorant.
We may explain it in ten thousand ways,
But all these explanations may be traced back to one principle,
To illumine our gloomy mind, stained by defilement,
We should constantly set up the Sun of Wisdom.

Grand Master Lian-Sheng proceeded to expound on few crucial points in the passage:
The so-called ``discernment by word and discernment by mind`` in which the former signifies an expedient rhetoric means to convey thought and the latter signifies an unspoken, speechless means to convey thought utilizing a ``mind-to-mind seal`` transmission (心印心) yet not pertained to psychic ability; it`s a discernment through mental faculty. The discernment by mind is likened to the moving sun in the space; it moves incessantly without abiding. Likewise, Dharma exposition also signifies a movement without abiding.
A Dharma practitioner ought to be non-abiding (無所住). In the so-called Dharma-instruction of Tantrayana Buddhism, it is stipulated that the practitioner ought to leave behind his or her own hometown, home, world affairs and all followers - for having too many of them would entail incessant entanglement. Therefore, a Dharma practitioner has to learn to take recess from the world, to live in a remote mountain and to itinerate everywhere!

In this world, nothing can be gained by pursuit, per se; there is no such thing as permanent healthiness; there is no such thing as permanent longevity; there is no such thing as permanent wealth; and, there is no such thing as permanent officiary power. Even if the object of pursuit is reached, the duration of having it is temporary! Birth-senility-illness-death (生老病死), calamities (災難) and spouse-money-heir-fortune-love-hate (妻財子祿愛恨) are all temporary phenomena. As long as being able to brave and accept all adversities (看得開), to become enlightened (開悟) and to possess of the Wisdom of Tathagata Buddha (如來智慧), then one has already changed his or her own very destiny! To change one`s destiny, the Wisdom of Tathagata Buddha has to be utilized to eradicate vexations and anxieties, as well as purify one`s own thought! Multitude of remedies in Buddhism shall culminate in a testimony to the absoluteness of Buddha Nature (見證佛性); one has to terminate all vexations and anxieties (斷煩惱) and be able to maneuver freely in space unrestricted! The real Dharma consists in discerning true Buddha Nature. On affording testimony to Buddha Nature and possessing of Wisdom of Tathagata Buddha, one shall be accorded freedom to maneuver and move about (in space) similar to the sun in space: this is the essential of the Sixth Patriarch`s teachings!


Thereafter, in the midst of recital of Buddha`s epithet by all the participants, Grand Master compassionately sanctified the Buddha statues and effigies and blessed the Great Compassion Dharani water. And, despite all the toils, He bless-empowered the disciples kneeling along two sides of a human aisle by palming their heads.
The fervor of the disciples still lingered and could not be subdued by the frigid air and wind outside of the Temple. Amid the voices of thanks, the participating disciples hesitatingly bade farewell and good night to Grand Master and Grand Madam. 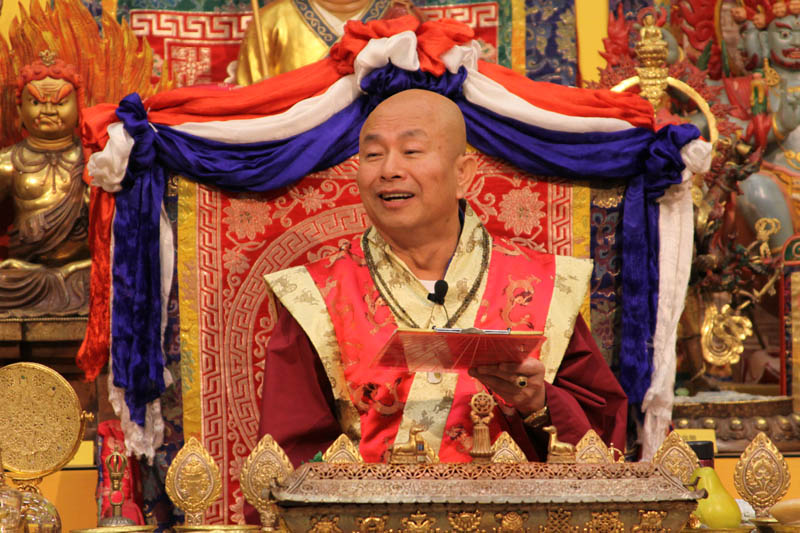 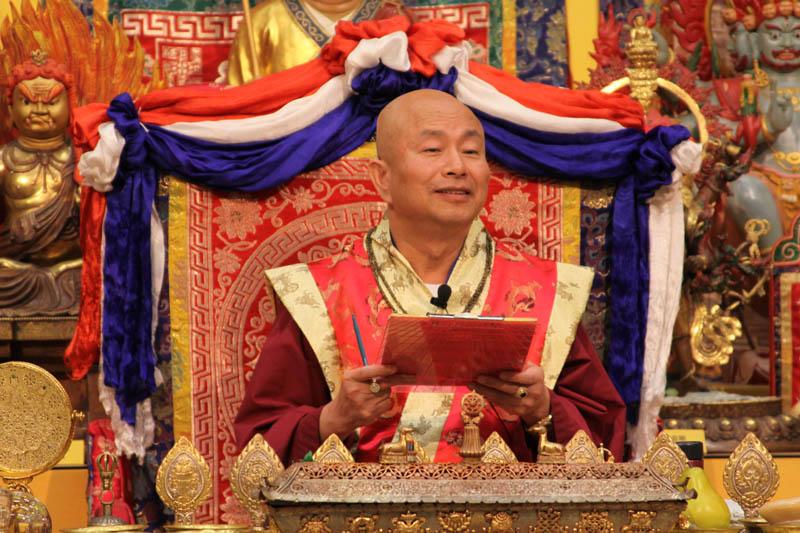