The deep bond between master and disciple 「師徒恩情」is beyond space and time, thereby manifesting truth

The weekend group cultivation on January 30th, 2010 at Ling Shen Ching Tze Temple was ministered by Acharya Master Lian-Dien (蓮店金剛上師) featuring Amitabha Principal Deity Yoga Practice 「阿彌陀佛本尊法」. The group cultivation was presided over and personally blessed by Grand Master and Grand Madam per se. After the cultivation, a short yet assertive Dharma talk was presented by Dharma Instructor Lian-Tan (蓮壇法師) regarding ``time`` 「時間」, that which no one can take possession of. The practitioner may learn to make best use of time as one would with Buddha-Dharma; the foremost importance consists in comprehending it through experience and applying it appropriately. Next, the new Acharya Master Lian-Dien (蓮店金剛上師) who had recently been authenticated by Grand Master to be the incarnate of Great White Lotus Padmakumara, was presenting a Dharma exposition at Ling Shen Ching Tze Temple for the first time on the heels of Dharma Instructor Lian-Tan. Acharya Lian-Dien sincerely expressed her heartfelt gratitude towards Grand Master for His blessings and towards Grand Madam for Her personal guidance, as well as towards all the devotees who lent help and support. She asserted that a practitioner ought to adhere to the importance of root lineage 「根本傳承」and have correct views 「正確的知見」in order to attain fruition in Tantrayana practice (成就密法) and be liberated from the confine of life and death (了生脫死).

Next, the King of Dharma, Grand Master Lian-Sheng continued on with His discourse on ``The Altar Sutra as Spoken by the Sixth Patriarch`` 《六祖壇經》, specifically the section on Prajna:

Erroneous views keep us in defilement While correct views remove us from it.
But when we are in a position to discard both of them We are then absolutely pure.
Boddhi is immanent in our Essence of Mind,
And attempt to look for it elsewhere is erroneous.
Within our impure mind the pure one is to be found,
And once our mind is set right, we are free from the three kinds
of beclouding (defilement, evil karma, and expiation in evil
realms of existence).
If we are treading the Path of Enlightenment
We need not be worried by stumbling-blocks.
Provided we keep a constant watch on our own faults,
We can not go astray from the right path.
Since every species of life has its own way of salvation,
They will not interfere with or be antagonistic to one another.
But if we leave our own path and seek some other way of salvation,
We shall not find it,
And though we plod on till death overtakes us
We shall find only penitence in the end.
If you wish to find the true way,
Right action will lead you to it directly;
But if you do not strive for Buddhahood,
You will grope in the dark and never find it.

Prior to the commencement of Grand Master`s discourse, Grand Master carried on a solemn dialogue with Acharya Master Lian-Dien in the presence of all the Deities in the Mandala Shrine as well as all the participants in the venue, which revealed an emotionally moving episode of master-to-disciple bond stemmed from a karmic affinity between them. It is known that Grand Master had been giving Dharma instruction to Acharya Master Lian-Dien for nearly twenty years in the spiritual world. Through the barrier of space and time to this day, Grand Master and Acharya Master Lian-Dien are still able to recall clearly the details of the setting in which the Dharma transmissions had transpired in the other world. Grand Master elaborated: this is not a psychic phenomenon, but is a genuine one-on-one Dharma instruction, a true authentication process and an indivisible continuum of time. Grand Master also praised Acharya Master Lian-Dien as a great sage and is well suited to be a missionary; He anticipated her to ``carrying on without carrying on``(無為而為), so as to widely redeem all sentient beings. Then, Grand Master went on to expound the quoted excerpt: the most precious thing in the world as professed by the Sixth Patriarch is the First Tenet「第一義」, that is, to enlighten the mind and discern the Essence of Mind, whereby one can emancipate oneself from the confine of life and death and end all vexations. The only thing that will last forever is Dao 「道」or the Way. Buddha had once said: every human being has Buddha Nature within and every person has his or her individual own way of Dao that does not interfere with another person`s Dao. How can a Tantrayana practitioner discern his or her own Buddha Nature? It can be done by emptying one`s mind and let not a thought arise; one has to see through all thoughts, to disenchant and disillusion oneself from all thoughts thereby not being led astray by thought. When vexations (煩惱) are completely exhausted and extinct「漏盡」, one will be able to discern the true Buddha Nature within oneself, that is, ``Illumine the mind and become enlightened; discern the Essence of Mind and reach Buddhahood`` 「明心開悟、見性成佛」.

Thereafter, Grand Master compassionately bestowed refuge empowerment on new initiates, blessed Great Compassion Dharani water and sanctified Buddha statues and effigies. Grand Master also bless-empowered all the disciples kneeling down along both sides of a human aisle by palming their heads on His way out of the temple. Upon departure, every disciple was overwhelmingly inspired wishing that the dear Master in this very lifetime and one`s individual karmic affinity with Him will last forever through the continuum of space and time. 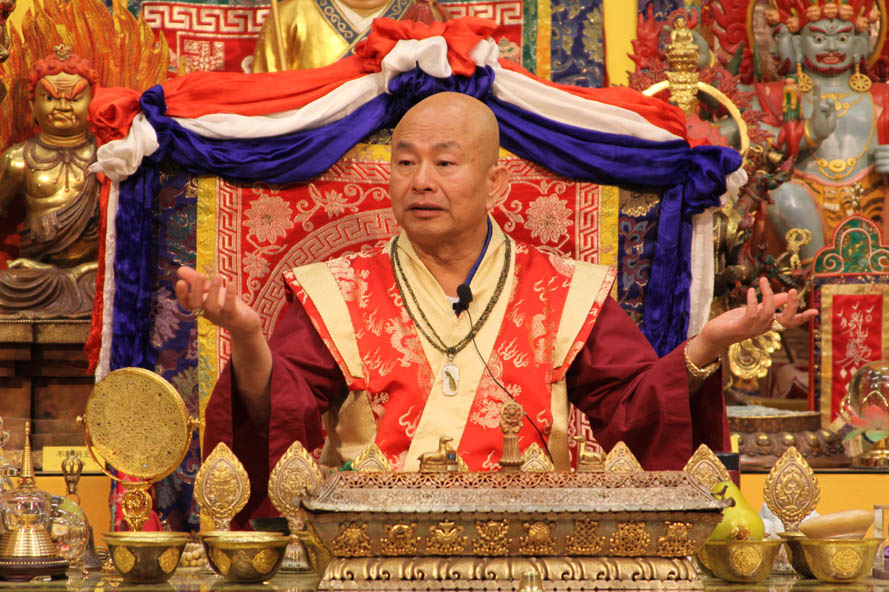 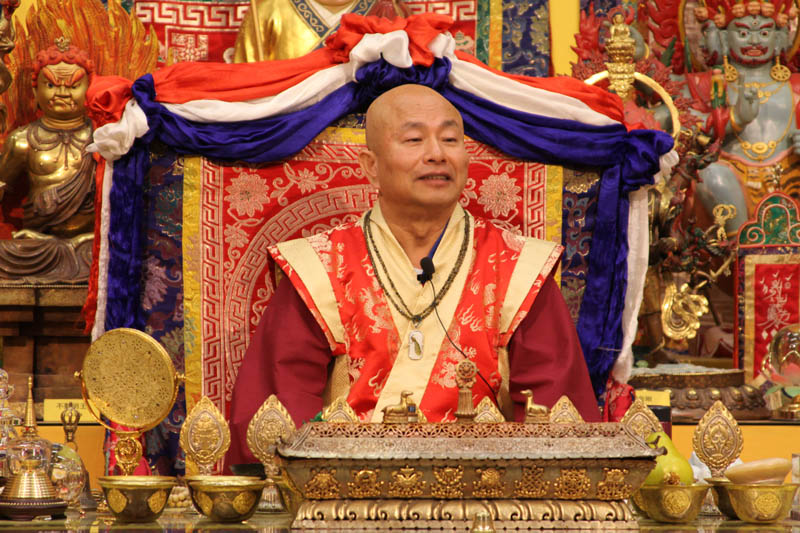 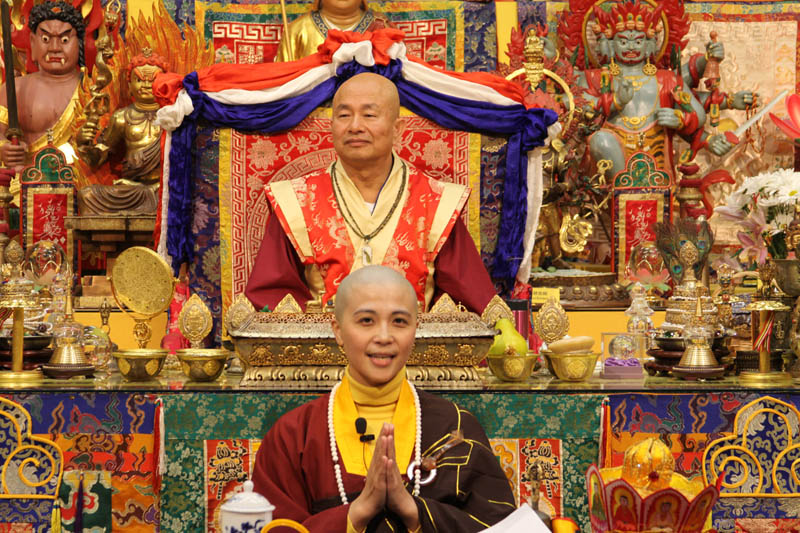