The King of Dharma, Grand Master Lian-Sheng resumed His ongoing discourse on ”The Altar Sutra as Spo

On February 6th of 2010, in the interest of eradicating calamities and appealing for blessings, Ling Shen Ching Tze Temple had prepared these offerings: flowers, incense, candles, tea, fruits, pastry, candies and glutinous rice flour dumplings, as well as other delicacies. These offerings were intended for a farewell ceremony dedicated to last year`s Lord of Year and Age in charge. The ceremony was ministered by Acharya Master Der-Huey (德輝上師)and jointly upheld by Acharya Master Lian-Dzen, Acharya Lian-Jie, and Dharma Professor Bi-Zhen, as well as numerous Dharma Instructors and co-devotees. Acharya Master Der-Huey commenced the ceremony by thanking the past year`s Lord of Year and Age (Pan-Yo Celestial Deity 潘佑太歲星君) with an invocation and incense for the year-round blessings bestowed upon us. The Deity was then solemnly taken leave of and sent back to His heavenly abode; the runic talisman pertained to the Deity was removed from the altar and burned together with stacks of sacred joss paper to bid final farewell. Next, another similar batch of offerings were also prepared beforehand for the subsequent ceremony, i.e, to usher in a replacement Lord of Year and Age to preside at the vacant abode in the Mandala Shrine. The new replacement Celestial Deity 「星君」is General Wu-Huan 「鄔桓大將軍」. Incense was burned and an invocation was recited to conjure up the new Lord of Year and Age, the Celestial Deity 「星君」for year 2010 or Geng-Yin (庚寅年) lunar year, to descend upon the altar. Sincere supplication to the new Lord of Year and Age, General Wu-Huan, was thus rendered as to bless all the registered devotees such that their year-round life shall be safe, healthy, obstacle-free as wished and auspiciously pleasant. Two sutras were recited to acquire merits to fulfill the wishes of the registered devotees, namely, the Golden Sutra of the Righteous God of Meritorious Virtues「福德正神金經」and the True Sutra of Sun and Moon「太陽太陰真經」.

The farewell and conjuration ceremony had hence been satisfactorily completed with sincere invocations.

The group cultivation assembly as of February 6th, 2010, Saturday at 8:00 p.m. held at Ling Shen Ching Tze Temple in metropolitan Seattle, was personally blessed and presided over by Grand Master Lian-Sheng. The group cultivation practice was led by Acharya Master Lian-Wang featuring Namo Avalokitesvara Principal Deity Yoga Practice. Before the group cultivation practice commenced, welcoming greetings were given to co-devotees from France, Hong Kong, Canton of P. R. China, California, New York, Atlantic City of New Jersey and other areas of the world. The participating Acharya Masters were: Der-Huey, Lian-Ning, Lian-Yin, Lian-Manh, Lian-Jie, Lian-Zhu, Lian-Huo, Lian-Shi, Lian-Zhi, Lian-Deng, Lian-Fu, Lian-Zhen, Lian-Tsai, Lian-Yee, Lian-Dien and Lian-Yuan. Also in participation were Dharma Professors, Dharma Instructors and co-devotees mentioned above. All seats were full leaving no vacancy. The cultivation session was broadcast in English and Chinese over the internet in real-time synchronicity.
After the group cultivation practice ended, Grand Master resumed his ongoing discourse on ”The Altar Sutra as Spoken by the Sixth Patriarch” 《六祖壇經》; the Sixth Patriarch said:

And though we plod on till death overtakes us
We shall find only penitence in the end.
If you wish to find the true way,
Right action will lead you to it directly;
But if you do not strive for Buddhahood,
You will grope in the dark and never find it.
He who treads the Path in earnest
Sees not the mistakes of the world;

Grand Master expounded the above passage: a person who toils through his whole life only to end up in self-reproach. In order to find Truth, right action will lead one to Truth. If one does not make any effort to find Truth, one would be living in darkness. A genuine practitioner of Dao or the Way is oblivious to faults of the world. Grand Master continued, cultivating oneself in Buddha-Dharma is essentially disciplining one`s own behavior. A practitioner ought to accommodate others before oneself. Always predispose oneself to do good deeds to earn good merits; always alert oneself to observe precepts and tolerate others in the wake of adversities so as to improve self-discipline. The practitioner should live happily everyday and greet each day with a positive outlook, inasmuch as ”There was originally nothing to perturb the world, but out of imaginary fears, people feel hopelessly worried and get into trouble” (天 下本無事，庸人自擾之). The practitioner shall see that everything in the mundane world will age, decay and transform; only Dao or the Way will stay permanent. One shall merge with Dao at onement to attain Buddhahood which is substantially permanent. Not being in union with Dao or the Way will entail continuous change which is known as the cycle of existence (輪迥).

After the cultivation practice, a Dharma exposition was presented by Dharma Instructor Lian-Ti (蓮提法師) summarizing his experience as an ordained monk for two years. He said the hardest obstacle to overcome is one`s own immoral seeds of habit (習性). He always uses this phrase as a constant reminder to warn himself in his spiritual endeavor: ”Coming back wearing fur and putting on horns to repay”(披毛戴角還): meaning to reincarnate as an animal to repay life-sustaining necessities donated by laity when a monk or nun fails to make progress on the path of spiritual endeavor. He asserted that one has to constantly remind oneself of the importance of cultivating diligently in Buddha-Dharma/Tantric-Dharma practice in order to be liberated from the Six Great Divisions in the Cycle of Existence (六道輪迥).

On the heels of Dharma Instructor Lian-Ti, the next Dharma exposition was presented by Acharya Master Lian-Wang (蓮旺上師), who elaborated on how to conduct oneself appropriately. He recalled that his past tenure at school and all the nitty-gritty of people and affairs that currently surround him are a result of one`s character in the works. He asserted that there are three types of benevolent friend: (1) straight forward (2) forgiving, and (3) resourceful with news. In order to conduct oneself as a Boddhisattva, one has to evoke the compassion based on the sameness in essence (同體大悲), to embrace a pledge to immeasurably redeem all sentient beings (眾生無邊誓願度), to give of oneself wholeheartedly to the welfare of others (完全付出), and to tolerate and respect others (包容與敬重). At last, Acharya Master Lian-Wang gave a goodwill new-year wishing for all participants in the venue. 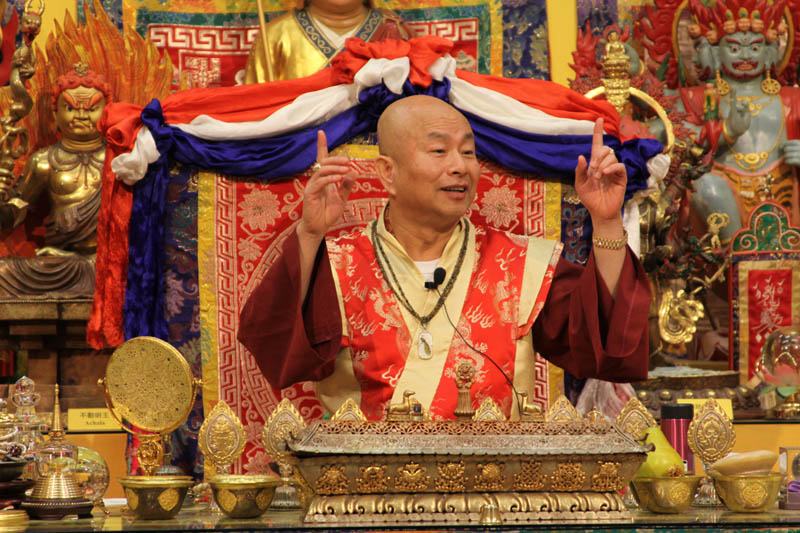 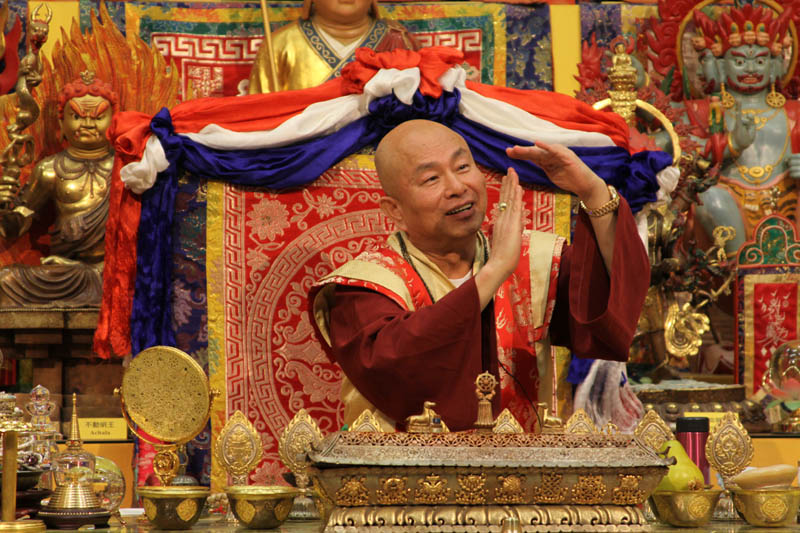