Grand Master, the King of Dharma conducted a homa ceremony dedicated to Ksitigharba Boddhisattva at

It`s quite fortunate to be a disciple of True Buddha School. The compassionate Grand Master consented to minister a homa ceremony dedicated to Namo Ksitigarbha Boddhisattva with bestowal of empowerment on all participants, in response to sincere requests made by numerous disciples of the Four Groups. The homa ceremony was conducted in spite of the fact that the day of the ceremony was also Grand Master`s very departure day on a long, grueling trip to Taiwan.

On February 7th of 2010, Sunday, at 3:00 p.m. the venue of the Dharma assembly was entirely imbued with solemnity. As the homa commenced, the host of the assembly, Grand Master Lian-Sheng ushered the participating disciples into the allegro of the homa ceremony. The upsurging fire from the homa hearth danced gracefully to the mudras which Grand Master evolve-executed with solemnity and fluidity. The merits acquired from this homa ceremony had hence been channeled toward eradication of calamities and fruition of good fortunes for all participants.

Upon completion of the homa ceremony, the King of Dharma, Grand Master Lian-Sheng presented an invaluable Dharma exposition. He revealed that since the moment the principal deity of the homa ceremony, Namo Ksitigarbha Boddhisattva, had descended on the homa altar, He never took leave of the altar thereafter. It`s especially meaningful to conduct a homa ceremony dedicated to Ksitigarbha Boddhisattva prior to the inception of Chinese Lunar New Year, inasmuch as all participants shall have their wishes fulfilled.

Grand Master also admonished the disciples of the Four Groups: there is a very important precept which stipulates that had a monk or nun done something wrong, it`s up to another monk or nun of seniority ranking to reprimand and discipline that monk or nun at fault; on no account should the laity have moral justification in reprimanding and criticizing the monk or nun at issue. All monks and nuns are to be cordially revered regardless.

Next, Grand Master expounded the Doctrine of Hevajra Deity《喜金剛講義》as to the aspect of ``visualization`` in Sadana or procedure of Principal Deity Yoga Practice.

The King of Dharma, Grand Master Lian-Sheng elaborated: as practitioner starts to cultivate in Hevajra yoga practice, one begins with visualization by reciting the Emptiness Mantra, whereby the practitioner visualizes everything vanishes into the immaculate and tranquil void. Then a BAM seed syllable hence appears in the void, which in turn changes into an eight-petal lotus flower. The pistil of the lotus flower then spawns a RAM seed syllable which changes into a whitish sun-disc or a whitish moon disc, and hence transforms into Hevajra Deity.

Grand Master pointed out: visualization is one component that constitutes Dao or the Way which is simultaneously the method of thoughtfulness and thoughtlessness. In visualization, the clearer the better and the finer the more meritorious. When visualization is combined with recitation of mantra, the principal deity will readily descend on the practitioner and spiritual interfusion is hence achieved.

On completion of the Dharma exposition, the King of Dharma, Grand Master Lian-Sheng personally imparted the unique empowerment of Ksitigarbha Boddhisattva Principal Deity Yoga to the participating disciples of the Four Groups.
Thereafter, Grand Master also bestowed a good-fortune amenity in ``red envelope`` to everybody at the venue. Sincere gratitude and rejoice is harbored by everybody as to how fortunate it is to have taken refuge in such an extraordinarily holy sage. 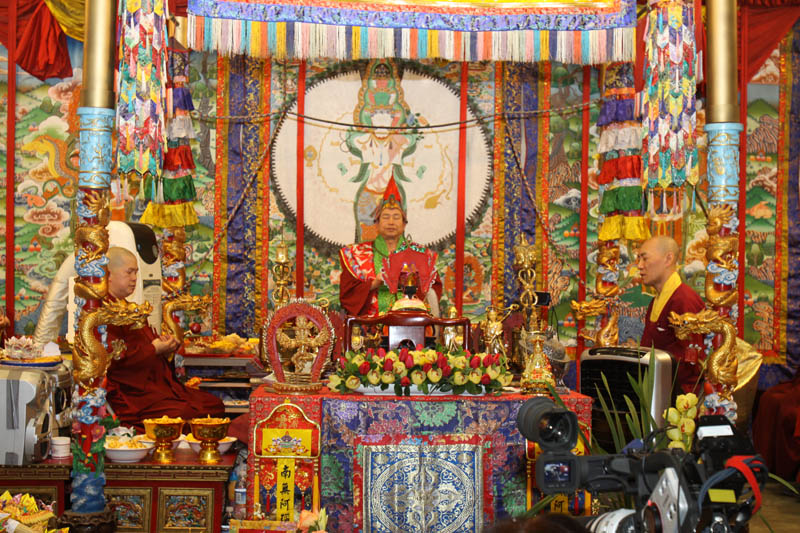