The King of Dharma Lian-Sheng, arrived at Taiwan True Buddha Temple (師尊蓮生活佛蒞臨台灣雷藏寺) on Chinese New Year`s Day and bestowed blessings on True Buddha disciples that they be healthy, abundantly meritorious and cultivating themselves steadfastly towards Buddhahood.

As of February 9th of year 2010, the Root Guru of True Buddha School, Grand Master Lian-Sheng returned to Taiwan on a mission to propagate the Dharma. As soon as upon arrival at Taiwan True Buddha Temple, a good news was announced: Xiang-Hua True Buddha Temple (香華雷藏寺) in Taichong City, Taiwan, has been ly licensed to operatofficiale and function as a Buddhist temple by the city government officials. The news was briefed in that evening to Grand master by Acharya Master Lian-Jieh (蓮傑上師), who is also the Director of Headquarters of True Buddha Tantrayana Association of China.

On the following day, February 10th, in the afternoon at 3:00 p.m., despite the lack of biological clock adjustment to the new time-zone, Grand Master set out on an exceptional expedition to Xiang-Hua True Buddha Temple to bless-empower the Temple, to sanctify Buddha statues and effigies, to deliver suggestions to redress the setup of the Mandala Shrine and to address other issues of the Temple. The fellow disciples of the Temple were hence very delightful at the outcome of Grand Master`s visit.

On the day of Chinese New Year Blessing Dharma Assembly, February 14th of 2010, the first day of the new year of Geng-Yin (庚寅年), at 2:30 p.m. in the afternoon, over ten thousand disciples already gathered in the parvis of the Taiwan True Buddha Temple awaiting Grand Master`s sacred arrival.

This day, the Great Fortune Vajra (大福金剛), the Living Buddha Lian-Sheng also bestowed on all attending disciples a complimentary Red Blessing Envelope (賜福紅包) at Taiwan True Buddha Temple for the first time ever since He immigrated to the U.S.A. The disciples of the Four Groups were thus delighted and the smile on each person`s countenance was articulating rejoice.

Among the VIP guests were Grand Master`s father Rev. Sigung Rh-Soon Lu (師公盧耳順) and sister(s) Rev. Sigu (師姑). Amidst the group chanting of the Padmakumara mantra 『Om, Guru Lian Sheng Siddhi Hum』 by all attending disciples, as well as the reverberating sound of the striking bell and drum, Grand Master, the Living Buddha Lian-Sheng was formally ushered in Taiwan True Buddha Temple.

Upon offering incense at the Mandala Shrine, Grand Master then prostrated Himself fully in a push-up style in front of the altar Buddhas to pay homage. Before Grand Master mounted the podium, He blessed the Buddha statues and effigies as well as other Buddhist articles and merchandise in the Temple store.
Next, Grand Master went on to host the opening ceremony to the Exhibition on Grand Master Lian-Sheng`s Books and Artwork 「蓮生活佛書畫展」.

Grand Master was respectfully invited to mount the Dharma Throne on the podium at about 2:40 p.m. in the afternoon, and the Chinese New Year Blessing Dharma Oration was then delivered by Grand Master.

Grand Master Lian-Sheng first bestowed a happy New Year blessing on everyone! And, He blessed Taiwan True Buddha Temple that it would stand forever and the incense would keep burning forever!

Grand Master said in a humorous way that this year is the Year of Tiger and He had to secure good-fortune talismans (安太歲) for His father Rev. Sigong and daughter Foqing (佛青) to appeal to the Lord of Year and Age (太歲) in charge. Taiwan True Buddha Temple is located on top of a mountain called ``Mt. Tiger`` and geographically is on a street named ``Tiger Mountain Road`` (虎山路) and Grand Master is a ``tiger-headed`` man (虎頭人), thus this Year of Tiger definitely will bring exceptional prosperity to Taiwan True Buddha Temple!

Grand Master bestowed blessings on everybody in the Year of Tiger that each person prospers like a tiger with wings attached and every pouncing tiger would give rise to gusts of wind; and, one`s future prospects shall be brilliant. He also hoping that everyone will be as healthy and fierce as a tiger being fearless of nothing. Blessed be everyone that his or her luck can be as tiger-like as possible as it swoops down on its prey.

Grand Master elaborated, Golden Mother of Jade Pond (瑤池金母) as the Principal Deity of the Heavenly Mandala Shrine presides at west-quadrant and is pertained to the element of metal. The west-quadrant is also associated with a symbolic beast known as ``White Tiger`` (白虎); Golden Mother can eradicate all epidemics because the fundamental form of the Golden Mother resembles a tiger and is thus as awe-inspiring as a tiger. As long as one recites the Golden Mother heart mantra, he or she will not be intimidated by the threat of the plaguing H1N1 epidemic!

Grand Master mentioned that His College Classmate Reunion Party to be held on February 28th will bring together His old-time classmates who He hasn`t seen for 41 years. Grand Master is now 66 years old and is still healthy enough to exercise on the parallel bars.

Once again, Grand Master bestowed blessings on every True Buddha disciple that he or she has a healthy body, prosperous career, satisfactory family, catastrophe-free life, abundance of merits, steadfast spiritual endeavor towards Buddhahood.

Blessed be everybody that all the wishes as mentioned before be fulfilled and realized, and that everyone`s regular cultivation shall lead one steadily towards interfusion with the Principal Deity and thereby Buddhahood can ultimately be attained by everyone.

Starting at 3:05 p.m. in the afternoon, Grand Master, the Living Buddha Lian-Sheng, on behalf of Da-deng Cultural Publishing Company, hosted a book-autographing session intended for the two-in-one volume comprised of an artwork book called ``Extension Platform`` (伸展台) and a calligraphy brushwork book called ``One Piece of Immaculate Heart``(一顆清淨心).

The artwork book``Extension Platform`` is a compilation of all the artwork that Grand Master had completed in year 2009; Grand Master wrote a poem in the preface section of the book which goes: 『I do drawing in accordance with the flow of feeling and my drawing is subject to change at any time... When I confront a mountain, I see majesty and magnificence in the rugged and undulate mountainous terrain. When I confront water, I see undulation and fluidity; when I see flowers and birds, I know existentially every natural appeal in the expanse of scenery of nature. In all respects, I profoundly and existentially discern the significance of existence in the Way or Dao (道) of nature. The perception stems from the virtuous exquisiteness of the heart. I am thus called ``A Vagrant Monk at the Farthest Bounds`` (天涯一遊僧). The great blissful luminosity is omnipresent in all ten directions, whereto I can not go? 』

At 3:55 p.m. in the afternoon, the King of Dharma Lian-Sheng started distributing the Red Blessing Envelopes individually to the multitudes of disciples while continuously reciting a mantra. Rev. Sigong was the first person in line to receive the Red Blessing Envelope; every disciple waited eagerly to receive the Red Blessing Envelope handed down personally by Grand Master. A long, curled line of people was formed extending from the parvis to the Grand Main Hall in the Temple. The line was bustling with recitation of Root Guru mantra, laughter and joyful utterances of fellow disciples. At sight of the venue, this Chinese New Year`s Day was deemed very different from any other Chinese New Year`s Day!

At dusk about 7:00 p.m., as Grand Master was exiting the doorway of the Hall of Compassion and Benevolence (慈惠堂), a paranormal display of Grand Master`s sacred radiances was captured on film by the staff of an adjunct branch office of True Budhha News agency. The visual was extraordinary!

On February 27th of 2010 A.D., Grand Master, the Living Buddha Lian-Sheng is scheduled to minister Chinese Lunar New Year Blessing Dharma Assembly Dedicated to Maha Mayuri Vidyarajni Deity or Luminous King of Peacock Deity (佛母孔雀明王大法會) at Taiwan True Buddha Temple.
The Tantric Dharma of this coming event is thus exceptionally unique that Entities from Above and Below shall illumine the event to bear out the testimony. 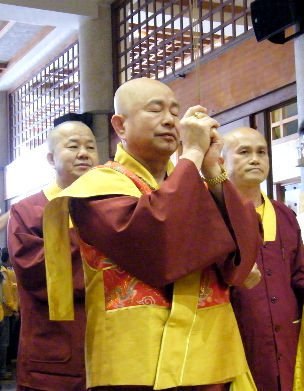 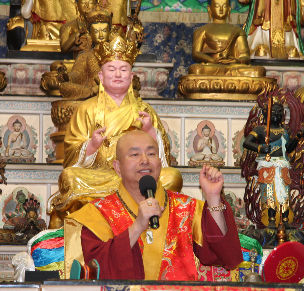 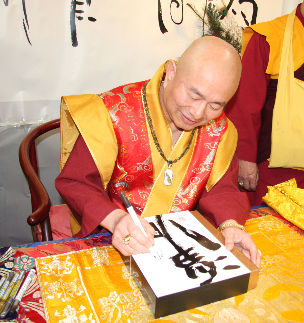 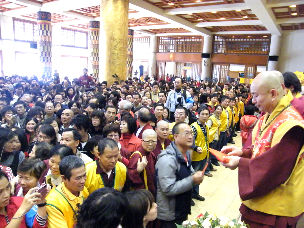 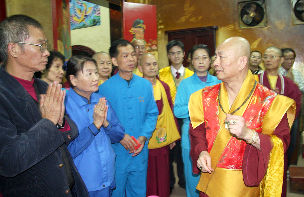