The King of Dharma Lian-Sheng sanctified and enshrined Dharma-Sound 法音雷藏寺 True Buddha Temple and ministered a homa ceremonial dharma assembly dedicated to Mariji Devi Boddhisattva (摩利支天菩薩), the outcome of which was uniquely splendid.

On the day of February 20th of year 2010 A.D., Saturday, equivalent to the seventh day of Chinese Geng-Yin Lunar New Year (庚寅年大年初七), situated at Xin-Ser Village in the county of Tai-Chung, Taiwan is the newly instituted Dharma-Sound True Buddha Temple awaiting the formal arrival of Grand Master Lian-Sheng, by whom the temple was to be sanctified and enshrined ritualistically. The temple dazzled with the splendor of colorful decorations and lanterns, and bustled with over three thousand True Buddha disciples who had already gathered at the venue waiting. Grand Master also conducted a homa ceremonial dharma assembly dedicated to Mariji Boddhisattva Deity thereafter. Earlier, Grand Master`s arrival in Taiwan was greeted with heavy Monsoon rain, but the weather turned sunshiny and clear of overcast on this day which was suggestive of reconciliation between True Buddha participants and the majestic solar power of Mariji Deva Boddhisattva.

In the afternoon at 3:00 p.m., Grand Master-the Living Buddha Lian-Sheng formally arrived at Dharma-Sound True Buddha Temple in the midst of sincere group chanting of Padmakumara Mantra: Om Guru Lian-Sheng Siddhi Hum, which went along with the beat of temple bell and drum. Grand Master was cordially invited to ritualistically sanctify the temple in its entirety and bless-empowered the Homa Ceremonial Hall on the second floor, and enshrined Yamantaka Vajra Tutelar statue, Kalachakra statue and the Mandala Shrine and statue of Hevajra Deity on the third floor. Grand Master also delivered a wisdom of aphorism in Chinese calligraphy writing, which goes: 「Every dharma is devoid of dharma, upon being dharma-less, a dharma exists; every sound is intrinsically silent, upon being silent, a sound exists; heaven-earth-sun-moon are within IT, earth-water-fire-wind are within IT, persons-literature-tasks are within IT, objects entrancingly flicker in and out of existence, the Way or Dao is quintessentially within IT」(法法實無法，無法便是法；音音本無音，無音即成音；天地日月在其中，地水火風在其中，人文事務在其中，恍惚有物恍惚無物，道在其中), as an incentive to spiritual endeavor.

At 3:45 p.m., Mariji Boddhisattva`s homa dharma assembly commenced (摩利支天菩薩護摩法會). Thereupon, Grand Master evolve-executed mudras while the uproaring fire of the homa hearth raged on and purified the multitudes of participants of their bodily and mental defilements. After the homa ceremony, Grand Master mounted the pulpit of Grand Ceremonial Hall on the first floor to preside over the venue. A dharma oration was first presented by Acharya Master Lian-Hai; he expressed gratitude over Grand Master`s magnanimous grace for blessing and fulfilling wishes of the multitudes with this homa ceremony. Acharya Master Lian-Hai then represented the multitudes in imploring Grand Master to deliver a dharma oration.

Grand Master started out by indicating that the Principal Deity of this homa ceremony, Mariji Boddhisattva is also the Supreme Lord over all the Lords-of-Year-and-Age and of the Twenty-Eight Constellations. As per Taoism, She is called Mother of Celestial Deities (斗母星君). Making offerings and paying homage to Mariji Boddhisattva would likewise serve the Sixty Jia-Zi (甲子) Lords-of-Year-and-Age in the same capacity (Note: Jia-Zi 甲子 is the First of Ten Heavenly Stems and the First of Twelve Earthly Branches per Chinese numerology). This homa ceremony not only served to eradicate calamities and bestow blessings on the multitudes, but also served to eradicate calamities and render blessings for Taiwan as a whole.

Grand Master delightfully spoke about His youthful years when He happened to be assigned to conduct a geographical survey in this same area on which the Dharma-Sound True Buddha Temple was built (in Xin-Ser Village of Taichung County, Taiwan), and that brought forth a nostalgic familiarity. This is an instance of spiritual rapport between the Dharma-Sound T.B. Temple and Grand Master. Grand Master also mentioned that long ago, there was a dharma-brother by the name of Ler-Kang Wang came to Grand Master for spiritual counseling during which Grand Master advised him to take ordination in monkhood at Mount Buddha-Light Temple (佛光山). Thereupon, this dharma-brother was entitled Huey-Gao Dharma Instructor (慧嵩法師) when he took the vows of a monk. Consequently, he excelled to the position of Director of Education and his foundation in Buddhism has been very profound. He is now known as Acharya Master Lian-Hai (蓮海上師) and is honored as a superior Acharya Master. Furthermore, Acharya Master Lian-Hai has a strong karmic affinity with Grand Master in that during one past incarnation in the Shamballa Buddhist Kingdom, Grand Master was chronologically the First Sovereign King and Acharya Master Lian-Hai was the Second Sovereign King in line. Inasmuch as karmic affinity that everything has Dependent Origination and the Emptiness of Nature (缘起性空), it has ultimately returned to the place of origin whence it came.

Grand Master further instructed the disciples of the Four Groups that everything is always undergoing change except the true Buddha-Nature. One must stand firm on spiritual endeavor and practice Buddha-Dharma/Tantra-Dharma steadfastly. At first, one ought to research the First Principal of Tathagata and thereupon abolish his or her seeds of immoral habits. Then, the body and mind shall merge with the universe as well as Buddha-Nature; this is a very crucial point.

Grand Master praised Acharya Master Lian-Hai in that he had arranged the Mandala Shrine or altar so well that all the holy and virtuous entities would converge in this abode. The whole building is full of Buddha statues and effigies reassuring the spirit of resoluteness and steadfastness. It`s highly venerable.

The Golden Mother of Jade Pond had once told Grand Master that He is free to ``go back whence He came`` at the age of 66. However, upon seeing the majesty and solemnity of the Dharma-Sound Temple radiating forth its spiritual radiances, as if being back in the Buddha`s Western Blissful World, and 「Upon seeing this group of adorable disciples, blessed be these disciples that they shall live few years longer! 」, the group of disciples responded with thunderous applause and a standing ovation as if the most auspicious blessings had befallen them from Heaven.

Grand Master compassionately blessed the multitudes wishing that today`s Mariji Boddhisattva homa dharma assembly shall hearten everybody that his or her wish(es) shall be fulfilled and everything is auspicious and satisfactory. Blessed be Acharya Master Lian-Hai that his spiritual endeavor shall reach fruition and that he widely redeems all sentient beings; every aspiration shall be accomplished as wished; and, all the good merits shall be limitless.

The multitudes of disciples took earnestly to receive empowerment of Mariji Boddhisattva in the midst of the continuous, energetic chant of the Principal Deity mantra, 「Om, Mariji Soha」The dharma assembly lasted over two hours; everything was satisfactorily auspicious; and, all the good merits shall be limitless! 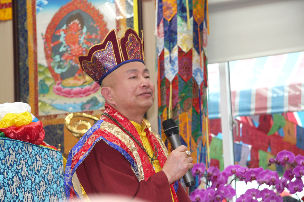 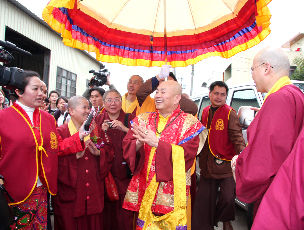 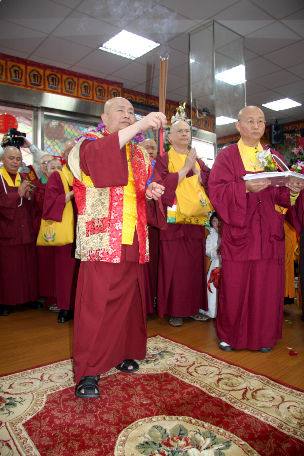 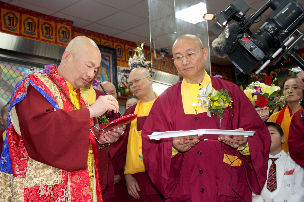 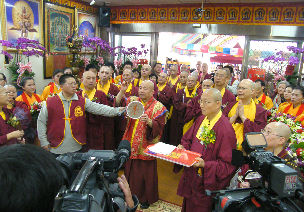 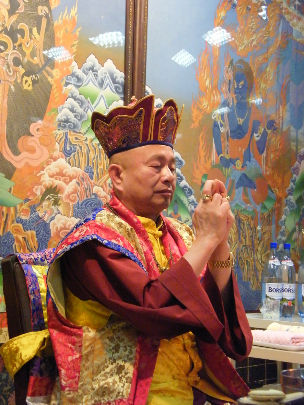 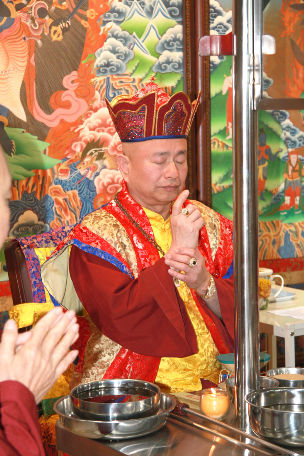 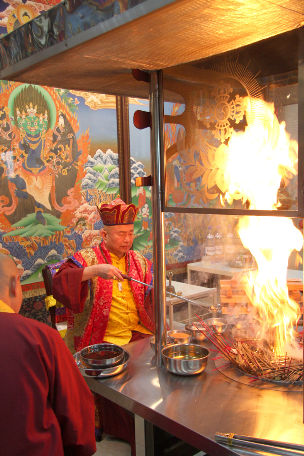 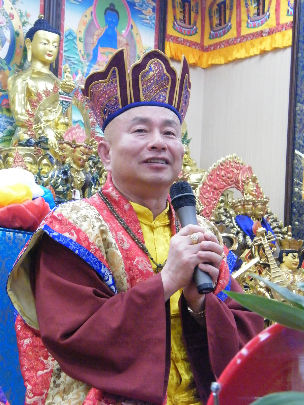 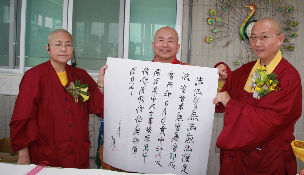