As of February 23rd, 2010 A.D., Grand Master Lian-Sheng stately arrived at Madhyamika Tucheng Cultivation Retreat Center 「中觀土城閉關中心」to ritualistically enshrine its interior Mandala Shrine and the newly annexed Ksitigharba Shrine for Aborted Fetus Spirits「水子地藏殿」. Grand Master also bestowed a wisdom of aphorism in Chinese calligraphy on this Cultivation Retreat Center and proclaimed Lian-Yue Acharya Master (蓮悅上師) by authentication to be the incarnate of Red Lotus Padmakumara (紅蓮花童子) in His dharma oration and that the accompanying Lian-Miao Acharya Master (蓮妙上師) to be Sarasvati (goddess of wonderful sound 妙音天女). Finally, at the earnest request of Lian-Yue Acharya Master, Grand Master compassionately imparted an Overall Lineage Empowerment on all the participants present. All the rituals were completed auspiciously satisfactory.

Madhyamika Tucheng Cultivation Retreat Center is located on the plateau of a mountain on the outskirts of Tucheng City of Taipei County, Taiwan. It`s a very auspicious and tranquil place in the countryside suitable for spiritual practice. The Center was donated entirely by Dharma Brother Shieh which is intended to be used as an intensive spiritual cultivation quarters and the recently built annex to the Center is Ksitigharba Shrine for Aborted Fetus Spirits - this is the first of its kind of shrine for aborted fetus spirits ever built in Taiwan. Wishing that all the astray and lost spirits of fetuses resulted from abortion or miscarriage be safely secured in this abode. In addition, Lian-Yue Acharya Master shall minister a homa ceremonial dharma assembly at this location dedicated to Usnisavijaya Deity on a monthly basis and the merits thus acquired shall be transferred to multitude of disembodied spirits.

On February 23rd at 5:15 p.m., Grand Master Lian-Sheng, the Living Buddha, at the devout invitation of Lian-Yue Acharya Master, agreed to stately visit Madhyamika Tucheng Cultivation Retreat Center for the first time. Everyone on this expedition chanted the Root Guru Mantra following the footsteps of Grand Master from the foothill of the mountain. The genius loci of the Cultivation Retreat Center during this restful time of dusk was that of serenity. After a short while of uphill climb, Grand Master finally arrived at Madhyamika Tucheng Cultivation Retreat Center in the midst of greeting drum beats played by Maha Kala Tutelar Band. Grand Master then sanctified and enshrined the interior Mandala Shrine and the Ksitigharba Shrine for the Aborted Fetus Spirits. Thereupon, Grand Master wielded a black ink saturated brush in rendering a calligraphy artwork piece. At the advice of Lian-Miao Acharya Master, Grand Master randomly spattered black-gold ink on the white paper producing marvelously aesthetic effects.

On the heels of the calligraphy presentation, Grand Master stately told the six hundred plus disciples that ``We must pay a visit to Lian-Yue Acharya Master`s Madhyamika Tucheng Cultivation Retreat Center, because I know she is intrinsically an incarnate of Red Lotus Padmakumara and Lian-Miao Acharya Master is an incarnate of Sarasvati. And, Acharya Master Lian-Deng (蓮嶝上師) is also present here, so visiting the Madhyamika Cultivation Retreat Center is a must.`` The multitude of disciples applauded with rejoice upon hearing that Grand Master personally authenticated these two Acharya Masters.
Grand Master stately elaborated that the geomorphic attributes of this Retreat Center as pertained to divination of the Center`s future prospects; He revealed that the shape of the mountain directly across from it resembles a ``writing desk,`` and thereby superior True Buddha missionaries will emerge. Even though it`s dusk, Grand Master told the multitude to the contrary that everybody has a light source at the heart which will shine forth and illumine the whole world. Grand Master stressed that He is more than happy to sanctify Ksitigharba Shrine for the Aborted Fetus Spirits and is more that happy to invoke all the Buddhas and Boddhisattvas and Heavenly Tutelaries to descend upon this precious tract of land to bestow blessings.

Acharya Master Lian-Yue also took the opportunity to beseech Grand Master to transmit the empowerment of Tathagata, the Goddess of Buddha`s Eye, Amitabha, Padmakumara and Overall Lineage to all the participating disciples. Grand Master counseled everybody, upon receiving the empowerment, to abide by the virtue of the lineage in strengthening one`s firm stand on spiritual endeavor and discipline; to practice Buddha-Dharma steadfastly; and, wished that everybody can attain to the maximal spiritual fruition.

Thereafter, Grand Master started on a slow descent down the mountain trail as the Maha Kala Tutelar Band took leave of Grand Master with the beats of the drum. Although the sky progressively darkened to pitch darkness, the hearts of the multitude of disciples illumined forth. In anticipation of the next rendezvous between the Master and disciples, abiding in the luminous sacred state of mind still stands. 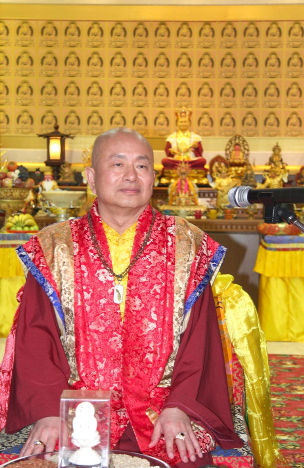 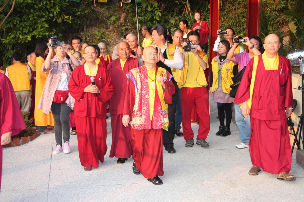 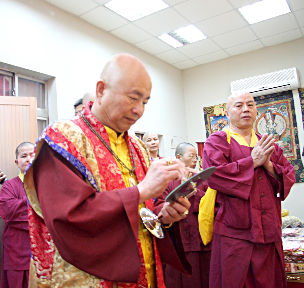