Grand Master, the Lineage Root Guru Lian-Sheng, on being a culturist of Taiwan, constantly dwells His thought on Taiwan. Grand Master, His Holiness Lian-Sheng had formally arrived at Taiwan True Buddha Temple on February 27th of 2010 (Saturday at 1:30 p.m.) to conduct Maha Mayuri Vidyarajni Homa Ceremonial Dharma Assembly in an effort to bless the common people and eradicate their calamities in time of Chinese Lunar New Year - the Year of Tiger. This is the first time Grand Master ever ministered a Lunar New Year Blessing Dharma Assembly since He immigrated to the United States in 1982. Afar had come multitudes of devotees to uphold this venue of Dharma Assembly from all over the world totaling over fifty thousand people. The King of Dharma, Lian-Sheng, beseeched that the weather stabilizes in Taiwan, calamities are kept at bay from everybody and that wisdom and merits are enhanced considerably.

This is an important annual round of events for True Buddha School: Taiwan True Buddha Temple had started a series of activities from the Lunar New Year`s day (February 14th, 2010) when Grand Master distributed Red Blessing Envelopes to all participants and hosted a autograph session on His paintings; an exhibition of Grand Master`s literary and art works, as well as a fund raising drive on behalf of Sheng-Yen Lu Charity Fund Foundation transpired between February 14th and 28th; Maha Mayuri Vidyarajni Homa Ceremonial Dharma Assembly ministered personally by Grand Master on February 27th; prize drawing game on answers to questions based on Grand Master`s literary works on February 28th; Lantern Festival held concurrently with Thanksgiving Evening Party and Grand Master`s Alumni/Alumnae Reunion Party on February 28th.

On February 27th, prior to the commencement of Lunar New Year`s Blessing Dharma Assembly, a formal address was delivered by Professor Shi-Yee Chu (朱時宜教授)-an academician at Central Research Institute of Taiwan, in which he asserted that there is only one Truth in the universe and that science and religion can interact with each other without conflict; he also recommended one of Grand Master`s books to the audience -``The Secret Files`` (機密檔案). Thereupon, a formal address was also delivered by Dr. Foqing Lu Esq. (盧佛青博士), who is currently the director of Sheng-Yen Lu Charity Fund Foundation (盧勝彥佈施基金會). She announced a good news: the Charity Fund Foundation will coordinate with True Buddha Foundation in furthering training and education of True Buddha School`s own staff; the Charity Fund will be appropriated to those staff who are motivated to pursue further education in an effort to upgrade their professional qualifications as missionaries, so as to better redeem and benefit sentient beings with karmic affinity.

Before the commencement of the Dharma Assembly, Grand Master was cordially invited to administer monkhood ordination on 2 Acharya Masters: Lian-Tsung and Lian-Tsing, and 6 Dharma Instructors. He also administered Laity Boddhisattva Vows on over 100 disciples and solemnized marriages for 24 newly wedded couples.

In the interests of greeting this splendid Dharma Assembly, high-flying banners were hung over the parvis of Taiwan True Buddha Temple evoking an ambience of vigorousness. Effigies of Maha Mayuri Vidyarajni were hung throughout the venue catering to the Principal Deity of this Dharma Assembly.
Grand Master`s Dharma Throne was majestically solemn on the podium overlooking the multitudes of disciples and was adorned with a large fanned-out backdrop of peacock feathers. The venue was not intended to be covered with portable marquees against rain and sun, so as to yield maximal scope of view for the audiences. Therefore, February 27th, the very day of Dharma Assembly, on all accounts, was not destined to stand any rain or sun flare in accordance with a spiritual supplication rendered by Acharya Master Lian-Zer, who was appointed the proxy Abbot of the Temple. Thereupon, Grand Master mounted the Dharma Throne, and, at His magnanimous grace, gestured an Invocation Mudra with His hands, which was intended to implore Maha Mayuri Vidyarajni Deity to block off the sun with Her wings for the sake of the participating disciples in the venue; thus, the weather changed at once from sunshiny to cloudy for the duration of the Dharma Assembly.
The Principal Deity of the Dharma Assemby, Maha Mayuri Vidyarajni Deity, whose root of origination is extraordinary. The Maha Mayuri Deity is a tantamount emanation of Vairocana Buddha and Tathagata Buddha, which is the Bliss Body of Amitabha Buddha and is also the Transformation Body of Sakyamuni Buddha. Spiritual interfusion with the Deity will allow the practitioner to change the predestinated factors in his or her destiny. One buddha alone is not capable of changing one`s predestined destiny, but combining the powers of multiple buddhas, as manifested in Maha Mayuri Vidyarajni Deity, can change one`s predestined destiny.

Grand Master, on this very day, also transmitted the sadhana,or procedure of practice, of Maha Mayuri Vidyarajni Yoga including mantra, mudras, visualization, offerings and special tips. In addition, He also taught a special ``Teleportation`` technique pertained to the same Deity; this technique was not taught at the last Dharma Assembly in Seattle, U.S.A. Furthermore, Grand Master has frequently been visiting with True Buddha disciples in their dreams to teach Buddha-Dharmas; He is capable of entering hundreds or thousands of disciples` dreams simultaneously regardless of how far away and whereabout the disciples are. As long as the place has stars in the sky, Grand Master is able to enter one`s dream; this is a well-kept secret, but Grand Master disclosed it openly.
Grand Master then elaborated on the ``Teleportation`` technique in the following:

The crucial point in this sadhana is having Maha Mayuri Vidyarajni Deity preside at your heart chakra and interfuse with Her at oneness. Then you send the Deity up into the space high above using your primordial vital Qi (元氣) with which you merge astral light from the stars, and thereby creating your own emanation body. Practicing this procedure 100 times would generate 100 emanation bodies. Grand Master has been using this method to generate numerous emanation bodies to visit True Buddha disciples in their dreams; this method is thus called ``Entering Dreams with the Astral Body.`` The modus operandi behind bestowal of blessings and fulfillment of wishes for multitudes of sentient beings on the part of Buddhas and Boddhisattvas is identical, in that They are able to fill the space with unlimited number of emanation bodies and carry out wishes of all True Buddha disciples without any of them being left out.

Thereupon, the participating disciples in the Dharma Assembly took to receive the invaluable and rare empowerment of Maha Mayuri Vidyarajni Deity Yoga from Grand Master, the Living Buddha Lian-Sheng, in the midst of the Principal Deity mantra recitation, ``Om, Mayuri Kalate, Svaha.`` The entire Dharma Assembly lasted over 5 hours, and everything was auspiciously satisfactory. 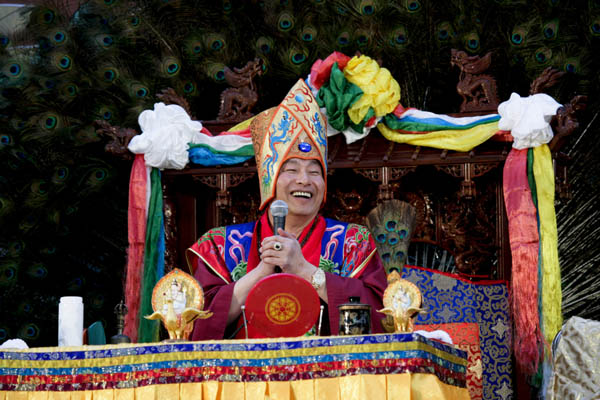 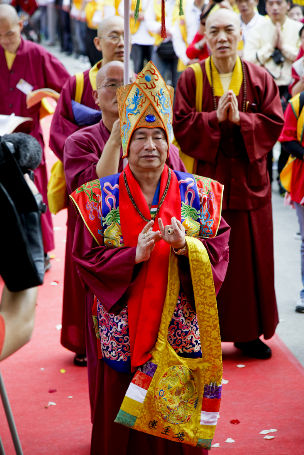 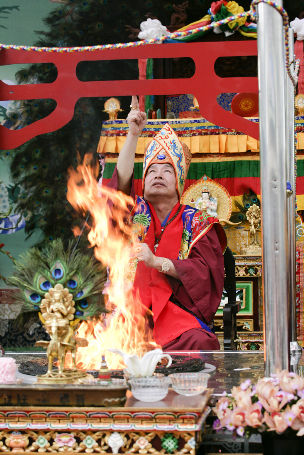 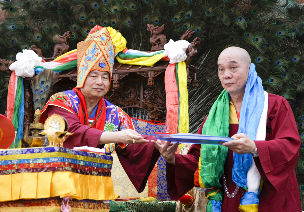 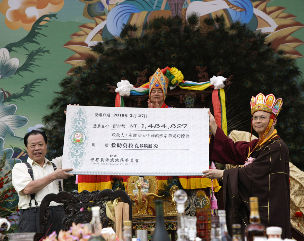 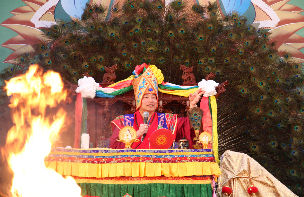 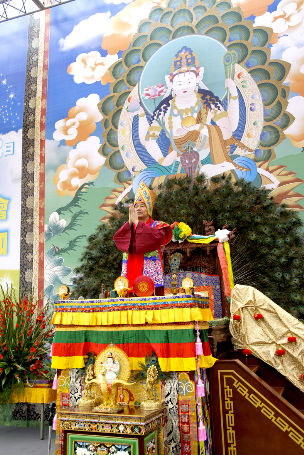 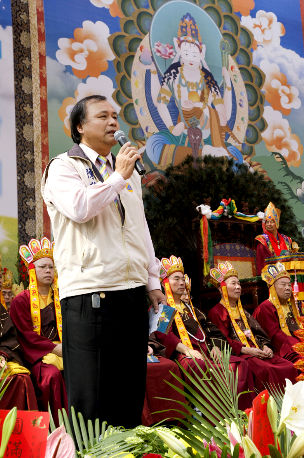 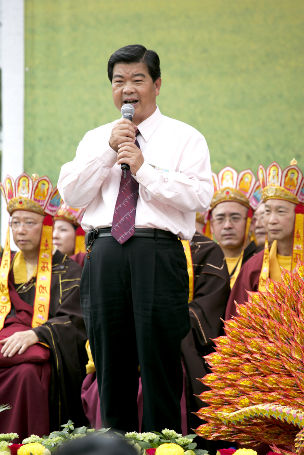 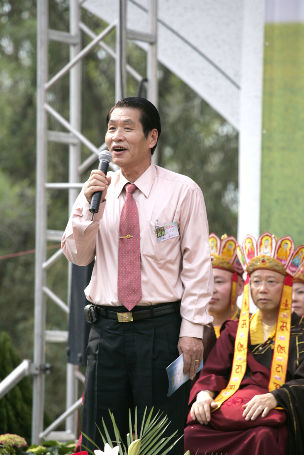 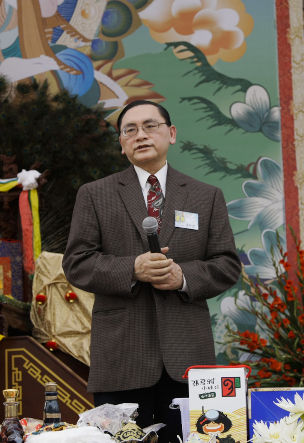 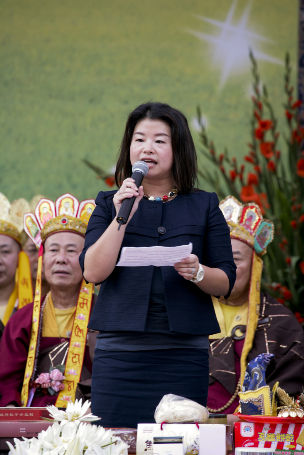 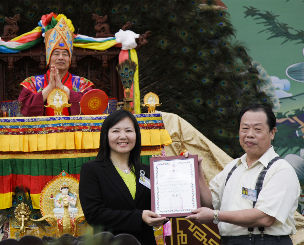 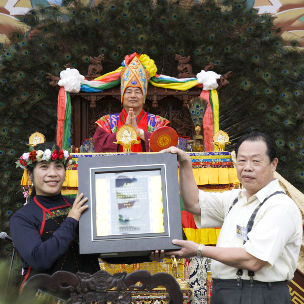 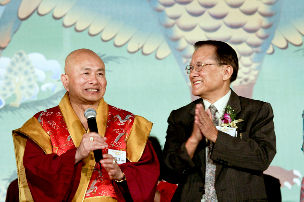