As the flowers amidst the hedges of the Temple were about to bloom at the onset of early spring, the news that everybody has dearly anticipated was being outspokenly spread at the Temple: ``Grand Master and Grand Madam have returned! `` Immediately in no time was the news of Grand Master and Grand Madam presiding over the coming weekend group cultivation being broadcasted on the internet so as to notify everybody.

The weekend group cultivation on March 6th, 2010 was ministered by Acharya Master Lian-Chuan (蓮傳金剛上師) featuring Cundi Boddhisattva Principal Deity Yoga practice. Thereafter, Dharma Instructor Xin-Mei (蓮花心美法師) delivered a dharma lecture regarding how an aspirant should bring to light the virtuous aspects of others while play down their negative aspects. And, only through conscientious self cultivation can one embrace everything and every being across the board and acquire great wisdom.

Thereupon, Acharya Master Lian-Chuan (蓮傳金剛上師) expressed heartfelt gratitude towards Grand Master for the toilsome Dharma propagation mission He had undertaken while in Taiwan. Acharya Master Lian-Chuan was deeply touched by the sincerity of some True Buddha disciples when they had gone the distance up a mountain to beseech Grand Master for transmission of certain Tantric-Dharmas.

She also mentioned what would be the most supreme offering an aspirant can make? That is, the evocation of the supreme Boddhi Mind whereby one can carry out the enterprise of vastly benefitting sentient beings. Acharya Lian-Chuan encouraged every aspirant to prioritize the welfare of others ahead of oneself, to pattern one`s own mentality after that of Avalokitesvara Boddhisattva, and to diligently eradicate oneself of karmic defilements.

After forty-one years of separation, Grand Master was able to reunite with (some of) His good old classmates in the Alumni/Alumnae Reunion Party was indeed melodramatic; the passage of time has left distinctive marks on every person. Being able to hold a Alumni/Alumnae Reunion Party for the first time after forty-one years was very extraordinary; this Reunion Party had finally put to rest one of Grand Master`s long-anticipated wishes.
Grand Master has comprehended deeply out of this Alumni/Alumnae Reunion Party what Buddha had once said ``Thrice Turn the Wheel of Dharma``: Void in Impermanence (無常空), Void in Karmic Causes of Affinity (因緣空) and Void in the First Tenet (第一義空). At all times, everything is undergoing change and deterioration/aging. Karmic causes of affinity (因緣) is impermanent; togetherness shall evolve into separateness over time and vice versa. There is not much time left of this lifetime, an aspirant should dispossess oneself of all karmic affinities, and, learn to brave and accept all adversities and to discern through insight into all things. The aspirant must develop a renunciatory attitude toward life (生出離心) and must call forth the Boddhi Mind from within (發菩提心), and develop the insight of the Middle Path (中觀) as well as Correct View (正見) as of the First Tenet, thus he/she can achieve fruition in Buddhahood.

Thereafter, Grand Master compassionately imparted the invaluable refuge empowerment to the new initiates, blessed the Great Compassion Dharani water and enshrined the Buddha statues and effigies. Grand Master also bless-empowered all the disciples by palming their heads who were kneeling down along both sides of a human aisle.

Grand Master`s voice became hoarse while He spoke on the podium this evening, on account of the fact that He had compassionately bless-empowered a few physiologically muted disciples prior to leaving Taiwan (Note: Grand Master had presumably absorbed some of these disciples` karma out of compassion). The great magnanimous grace and compassion of Grand Master is beyond verbal description. Given that we have such an opportune time to be with the compassionate and righteous sage is sufficient in this lifetime. 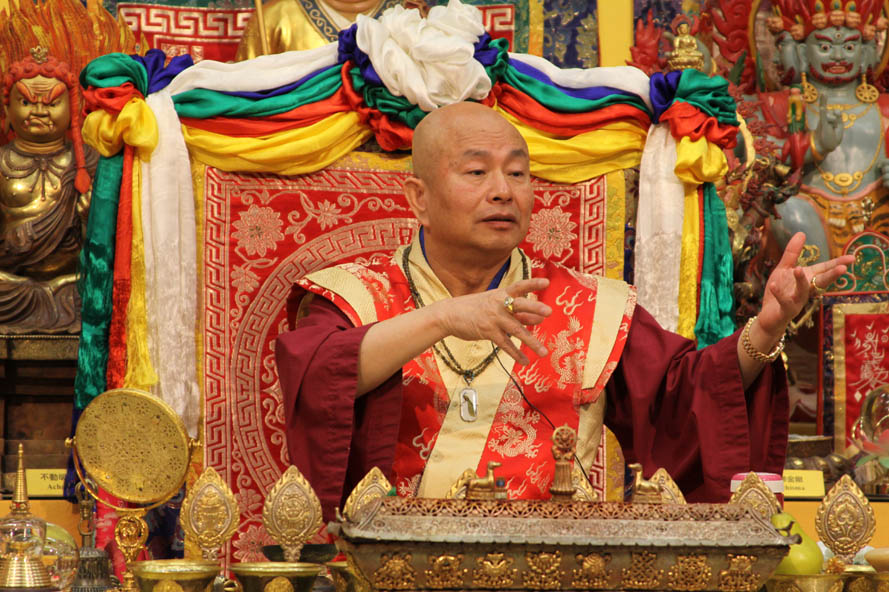 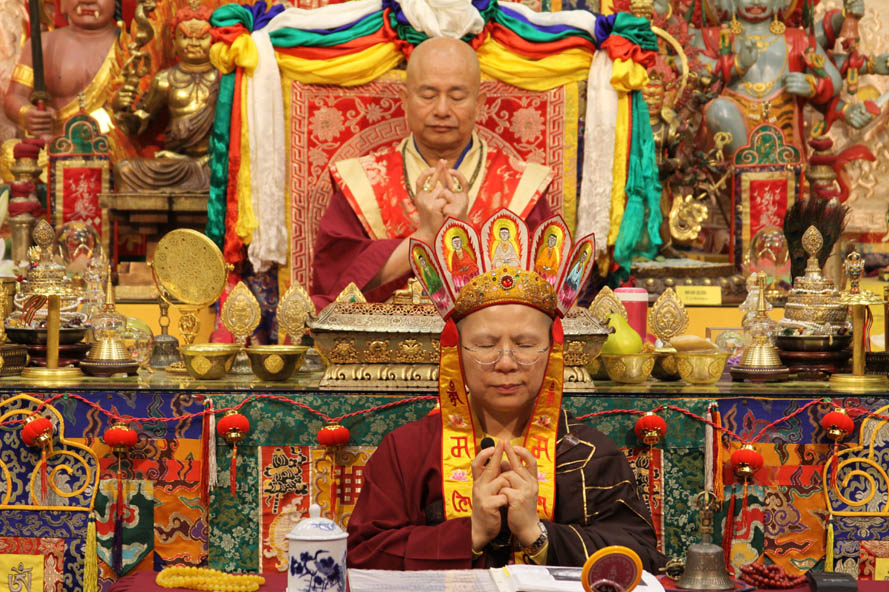 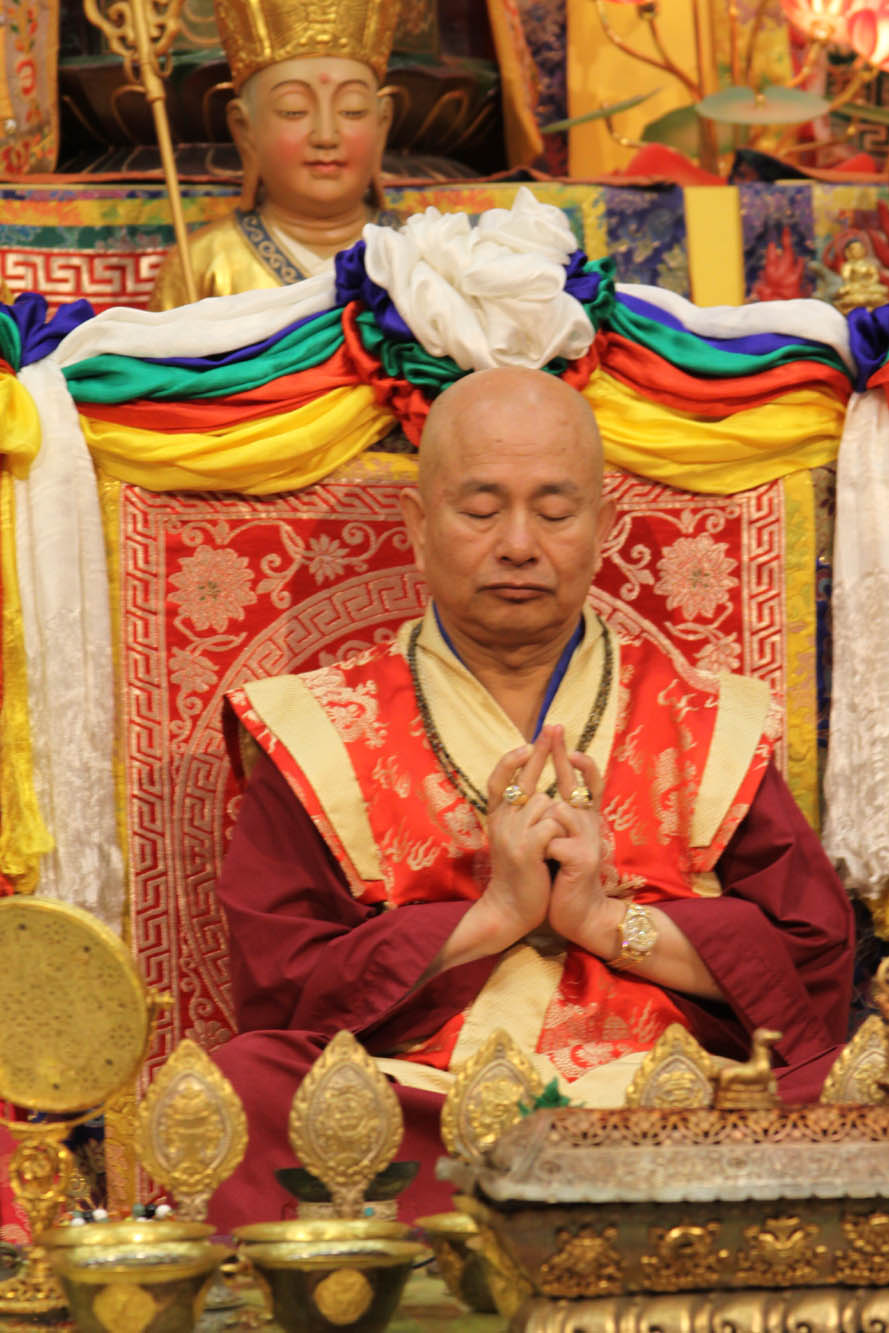 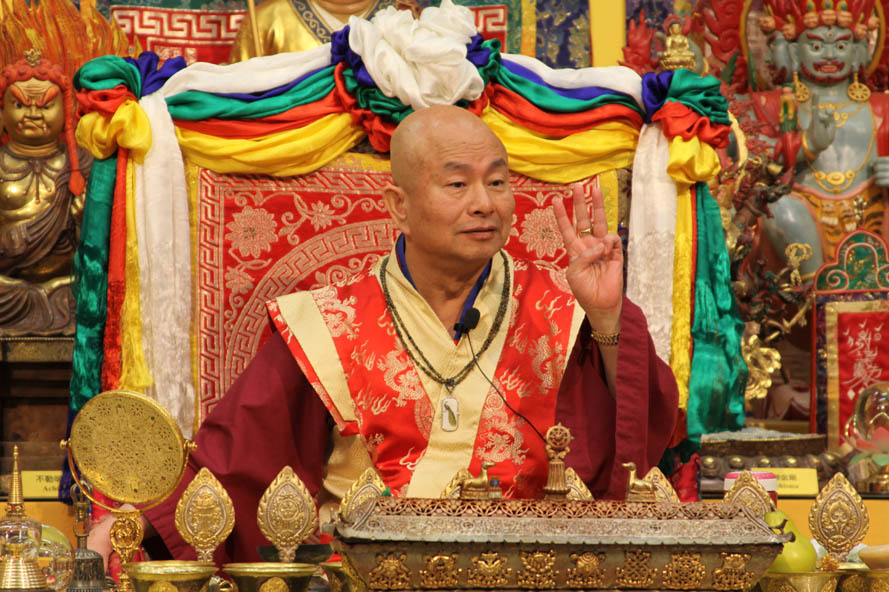