Aspirant should not engage in disputatious talk and behavior; one ought to learn to harbor magnanimi

March 13th of 2010, another day of weekend group cultivation being held at Ling Shen Ching Tze Temple. Afar had come devotees from all over the world to listen to the dharma lecture of Grand Master, despite the vast distances over which they travelled. Their ardent devotion befits the aphorism ``Only the faithful aspirants are worthy of the savory words of Dharma.``

Thereafter, a dharma lecture started off by Dharma Instructor Lian-Lian. She appealed to everybody to support and donate to the cause of Sheng-Yen Lu Charity Fund Foundation in that the establishment of an educational or medical institution under True Buddha School is being projected over the next 10 years.

Thereupon, the next dharma lecture was presented by Acharya Master Lian-Man in regard to ``The Seven Sacred Treasures,`` namely, faith, learning, shamefulness, willingness to spare, wisdom-wise contemplation, progressive endeavor and abiding by precepts. He said that worldly assets are nothing more than an expedient means to an end. On the other hand, a spiritual aspirant should concern himself/herself with gathering dharma merits towards spiritual attainment or rebirth in the Pure Land. This is the kind of asset that is truly in our own possession and has to be earned by one`s own effort.

Thereupon, Grand Master continued on with His discourse on ``The Altar Sutra as Taught by the Sixth Patriarch,`` specifically Chapter on Prajna. The excerpt goes:

If we find fault with others
We ourselves are also in the wrong.
When other people are in the wrong, we should ignore it,
For it is wrong for us to find fault.
By getting rid of the habit of fault-finding
We cut off a source of vexation.
When neither hatred nor love disturb our mind
Serenely we stretch out the legs to sleep.

Grand Master admonished all spiritual aspirants to be compassionate and magnanimous; the aspirant should refrain from finding and discussing faults in others; if the aspirant himself /herself is at fault, then eradicate the fault. If one can abolish the mentality of right and wrong, all vexations can thus be eliminated. Human life is full of birth, death and separation, and as causal conditions of karmic affinity terminate, they are hence voided. Therefore, there is no need to hassle over right and wrong.

Thereafter, the compassionate Grand Master imparted the invaluable refuge empowerment to the newly initiated devotees who had come from afar, blessed the Great Compassion Dharani water and sanctified Buddha statues and effigies. Grand Master also bless-empowered all the disciples who kneeled down along both sides of a human aisle by palming their heads. All the disciples left satisfactorily.

Grand Master had industriously dedicated His spare time to writing books. He just completed writing His 215th book, ``The Immense Propagation of Wisdom`` and was greeted with feverous applause from the audience anticipating that the book may be released from the printing press sooner. 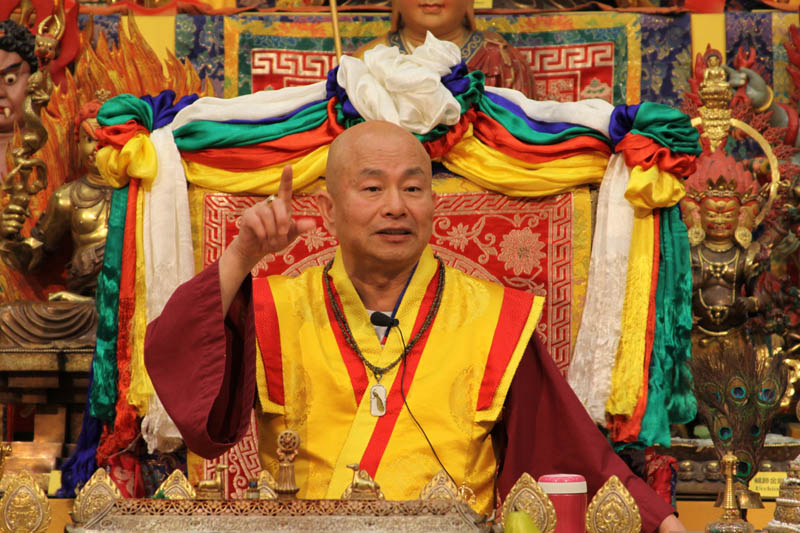