On March 14th of 2010, at the devout requests of multitude of True Buddha Disciples, Grand Master had consented to conduct a homa ceremonial dharma assembly dedicated to Vajrasattva Boddhisattva with the empowerment thereof. Upon broadcast of the news, disciples from U.S. and Canada had come exuberantly to Rainbow Temple to uphold the venue of the assembly. The Homa Ceremonial Hall was bustling with lot of people leaving no vacancy in the seating area.

That day, the sky was vastly clear of overcast and the sun shone forth in full strength dispelling the somberly stagnant atmosphere of the past week. At about 3:00 p.m., Grand Master was solemnly ushered in by a procession of Acharya Masters when entering the Homa Ceremonial Hall. At first, Grand surveyed the various offerings staged around the podium and mounted the Dharma Throne thereupon.

Grand Master commenced the homa ceremony by earnestly invoking the Principal Deity (Vajrasattva Boddhisattva) concertedly with the participating devotees while reciting the heart mantra thereof. The genius loci was imbued with spiritual energy. The uproaring fire of the homa hearth into which everybody was metaphorically absorbed and merged, and thereby all the participants were blessed under the radiances of Vajrasattva Boddhisattva.

Grand Master elaborated on the significance of the Hundred Syllable Mantra, specifically the short version which reads 『Om, Vajra-Sattva, Ah. Hum-Phe.』 It represents the most wisdom-abundant Being in the universal consciousness, that is, Vajrasattva, whose Siddhi accomplishment can eradicate all karmic hindrances.

The King of Dharma continued to profess to the Disciples of the Four Groups that the Hundred Syllable Mantra can be utilized in Repentance Sadhana or Cultivation, which serves to nullify all karmas to void, to Buddha Nature, to liberate oneself from vexations and to end the cycle of life and death.

Thereupon, Grand Master went on to expound the book, 『Emptiness in the Great Bliss』, on Chapter 9: The Visualization of Hevajra. He said when visualizing Hevajra, the aspirant is to visualize a black 『Hum』 Sanskrit syllable as a hook presiding at the heart chakra, which then reaches out to 『capture』 Hevajra Deity and brings the Deity back to the heart chakra. At that point, the aspirant merges with Hevajra Deity at oneness and embraces the Selfless Vajradevi (female) Consort while dancing exuberantly on the sun disc.

Grand Master further indicated that the more vivid and clear the aspirant can visualize, the more meritorious privileges would be gained. The aspirant has to train himself/herself to merge his/her body (action), mouth (speech) and mind (will) with that of the Principal Deity, Root Guru and Tutelary at onement, because Tantrayana Buddhism emphasizes merging, that is, interfusion.

When the aspirant visualizes, do not admit of any distressful thought; let the mind be free of day-to-day grind, anxiety and grudge; let it be tranquil and keep a middle ground between tension and laxity as in self-cultivation. If it`s too hard to visualize everything vivid and clear, it`s fine, try again step by step; it`s best to visualize the third eye on the forehead of Hevajra Deity.

The King of Dharma also made reference to the interfusion that occurred between Grand Master and Vajrasattva Boddhisattva during this homa ceremony. Grand Master indicated that upon receiving the dharma energy current from Vajrasattva Boddhisattva, the aspirant`s mind and body would be rid of vexing defilements and having wishes fulfilled and that everything shall be auspiciously satisfactory!

After the dharma lecture was delivered, Grand Master administered the empowerment of Vajrasattva Boddhisattva Principal Deity Yoga Practice to all the participants in the venue.
Lastly, the disciples entertained Grand Master with rehearsed performances, such as dancing, comedy, singing and so on. Grand Master, the King of Dharma, also performed a vigorous Tai-Chi form as a way to bless the participating disciples which brought the after-homa entertainment to a climax. The participating disciples at the venue felt very grateful towards Grand Master and were filled with rejoice leaving behind a wonderful memory. 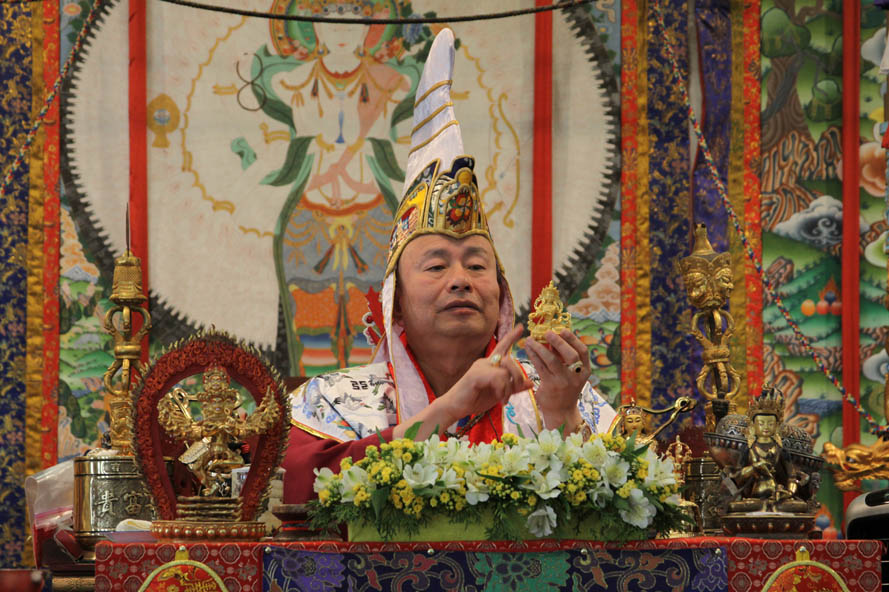