With the Chinese Double Ninth Festival(重陽節) nearing, Ling Shen Ching Tze was endowed with a panoramic view of a beautiful rainbow in the afternoon, as if we were foreshadowed to have a auspiciously perfect dharma assembly. On October 24, 2009 (Saturday), an annual anniversary dharma ceremonial assembly of the ``Amitabha Bardo Deliverance ceremony on Double Ninth Festival`` was being conducted by Acharya Master Lian-Herh (蓮訶金剛上師). The dharma ceremonial assembly was personally attended by Grand Master, the Living Buddha Lian-Sheng and Acharya Master Shimu together with numerous other Acharya Masters, Dharma Professors, Dharma Instructors and all fellow devotees from all over the world, i.e., Unites States, Europe, Canada, Asia and so on, have come to uphold, bask in the radiance of Buddhas, assimilate the teachings, and be blissful of dharma.
In the midst of the dharma ceremony that evening, Grand Master mightily blessed (the ceremony) with the power of Buddha; the hosting Acharya Master Lian-Herh performed hand mudras progressively dedicated to purification, enhancement, magnetization, subjugation and Bardo Deliverance of certain souls in the Hades.

ll the attending followers dedicated the merits of this ceremony with joint communal efforts towards their registered deceased predecessors and souls in the Hades, that they be promptly delivered, through the power of Buddha, to the Pure Land of Buddhas and live exaltingly, propitiously in the heavenly fields, and all the wishes shall be granted!

After the dharma ceremony, Acharya Lian-Herh spoke about two traits: perseverance and single-mindedness; success in any endeavor must be consequential upon continuous dedication and concentrated effort. This is best exemplified in the life of Grand Master in that he devoted considerable time and effort, on a daily basis, to dharma practice and writing which led to his completion of two hundred and ten books. This is a core example for all devotees to follow; as long as one is equipped with the basic external essential of money, friend, method and place, along with the inner essential of perseverance and concentration, and by following the footsteps of the Root Guru, the attainment of spiritual fruition is hence certain. Acharya Lian-Herh encouraged all followers to persevere progressively and diligently in the practice of True Buddha buddhadharmas (真佛密法), spiritual commune with a Principal Deity shall soon be in your favor on the day of reckoning.

Grand Master continued on with his discourse on ``The Altar Sutra as Spoken by the Sixth Patriarch``: ``Since some men are wise, the so-called the superior men and some men are ignorant, the so-called the inferior men, the wise preach to the ignorant when the latter ask them to do so. Through this the ignorant may gain sudden enlightenment, and their mind thereby becomes illuminated. Thus they are no longer different from the wise men.``

People with various levels of wisdom would have various outlooks on life and death; all the ordinary people favor life over death in general. People with profound wisdom realize that life-and-death is an integral part of human existence, is a change in causal conditions of affinity, and is never of concern to them. Whereas, people with even more profound wisdom realize that life-and-death is non-existent and is fundamentally equivalent to ``emptiness.`` Upon realizing this, the Vajra-citta (金剛心) prevails over the mind of the enlightened leading to ultimate enlightenment and spiritual realization.

A person of success is especially persevered and determined in his or her endeavor. Grand Master practices buddhadharma daily without slack; even when he`s out of town on a dharma-propagation mission trip, he would still practice buddhadharma on a motor vehicle or airplane en route to a destination. Grand Master would not slacken off because of travel sickness. He has been practicing this for decades on a daily basis; he has been concentrating on buddhadharma practice and book writing and thereby brought about attainment of fruition in buddhadharma naturally.

Grand Master encouraged every devotee to practice buddhadharma daily without slack. Since 90% of an ordinary person`s thought comprising greed, anger and delusion; slackening off without buddhadharma practice for one day is being a demon for one day and shall put one on the Wheel of Perpetual Reincarnation. Being in human existence, one must discipline his or her own thinking continually; one must rein in on his or her mind constantly so as to eliminate the thought which is 90% laden with greed, anger and delusion. As long as one is willing to restrain one`s own mind and not letting it go uninhibited, and single-mindedly practice buddhadharma assiduously, success is certain.

At the end of the dharma assembly, Grand Master compassionately imparted refuge empowerment to newly initiated followers, sanctified Buddha statues and effigies, and bless the Great Compassion Dharani water. Grand Master also bless empowered fellow devotees by palming their heads upon leaving the temple. The devotees prostrated to pay homage; they faithfully accepted and implemented the teachings professed by the Master and departed joyfully. 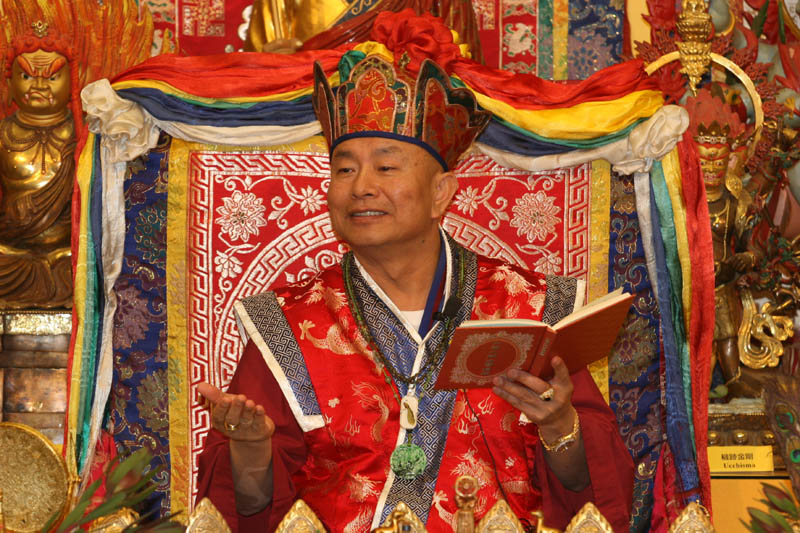 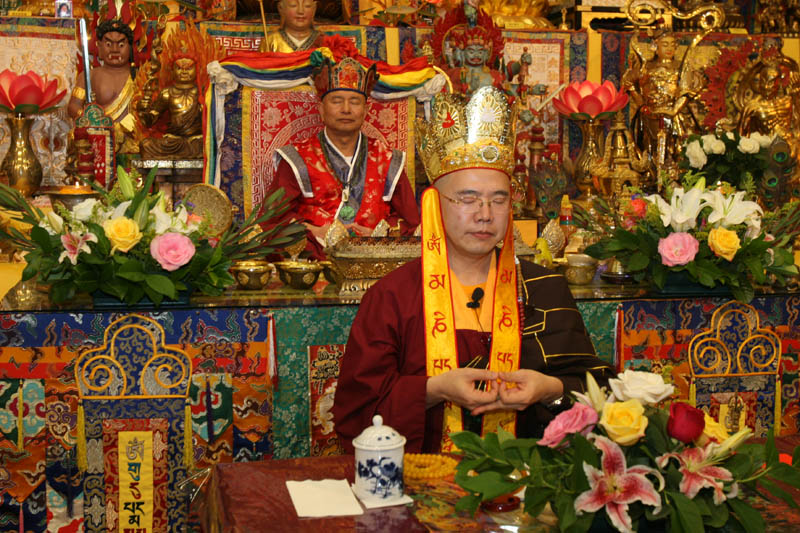 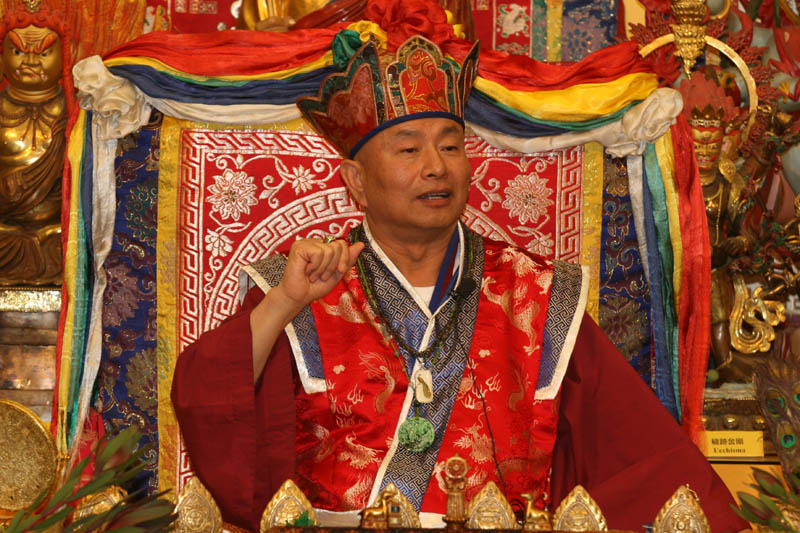