Kalachakra is the manifestation of the radiance of Self-Nature and bliss in the Dharma, and of the great compassion born of an affinity-less relationship, looking on all sympathetically as of the same nature as oneself. This manifestation is endowed with an unlimited blessing of ultimately perfect interfusion and wisdom. The Kalachakra Tantric Dharmas is the ultimate methodology of soul redemption. Grand Master Lian-Sheng is possessed of high degree of self-realization and mastery and is the first Chinese Dharma King ever to publicly transmit the Great Buddha-Dharmas of Kalachakra since time immemorial. Grand Master had once taken a vow to extensively transmit the Great Buddha-Dharma of Kalachakra in Five Continents as to pervasively redeem all the sentient beings with karmic affinity.

On the morning of November 14th, 2009 at 11:00 a.m., the King of Dharma sacredly arrived at the township of Farmersville in Texas, U.S.A. where the recently built Kalachakra Buddha Temple occupies more than 30 acres of land and comprises about 4 acres of area to the structure itself. Grand Master also bestowed to present a duet of calligraphic writing for the temple: ``The Tripitaka and Twelve Sections of the Canon of Buddha-Dharma, the Five Aggregates are thus Rendered Void by the Turning Chakra.`` Next, Grand Master proceeded to conduct the Kalachakra Blessing, Calamity-Eradication and Bardo-Deliverance Dharma Assembly, as well as to ritualistically institute the temple and sanctify the residing Buddha statues and effigies in the temple. Moreover, Grand Master also imparted the sadhanas (procedures) and empowerment of the following Dharmas: ``Seven Great Empowerments of Kalachakra``, ``Kalachakra Vajrakila Practice``, ``Kalachakra Shield Practice`` and ``Nine Stages of Kalachakra Dhyana``, and the ``All-in-One Empowerment of Golden Mother of Jade Pond,`` which includes ``Principal Deity Practice``, ``Substitute Body Practice``, ``Water Offering Practice`` and ``Seven Great Health and Longevity Methods.`` Grand Master also expounded the significant signs at attainment of fruition of the Kalachakra Tantric Dharmas.

The venue of the Dharma Assembly was never so bustling and active, which was attended by about one thousand people. Before the Dharma Assembly commenced, Grand Master, Acharya Master Shimu, Fo-ching Dharma Sister and VIP guests had joint the ribbon-cutting inauguration ceremony at the temple entrance. Grand Master also sanctified the two guardian lion-king Boddhisattva statues by ritualistically dotting their eyes with a sanctified calligraphic pen. After that, Grand Master went over to the temple to personally uncover the inscribed wooden plaque bearing the temple`s name. Immediately following that was the performance of traditional Chinese lion dance to celebrate the inauguration which brought about a very joyful applause from the audience.

Following the sanctification and temple instituting ceremony was the ritualistic ceremony for devoted followers to take the Vows of Lay Boddhisattva Precepts.

A formal address was presented by Acharya Master Shi Lian-Dzen(釋蓮鎮) with word of welcome and gratitude towards Grand Master for his sacred visit and presence at the Kalachakra Buddha Temple in Farmersville, Texas and for conducting the Kalachakra Dharma Assembly as well as sanctification and ritualistic institution of the temple. Special word of gratitude was also addressed to all the supportive Acharya Masters, volunteer co-devotees who worked collaboratively in the cause of our current accomplishments. Among the special guests present at this Dharma Assembly were: the Mayor of City of Princeton- Ken Bowers, the Mayor of City of Addison- Joe Chow, Ray Howell, Mont & Eunice Hendricks, Dick & Lodal Seward, the executive officer of Capital Bank-Sung Hong Suong Kangli (宋洪松伉儷), news media reporter of Farmersville Times- Wyndi Veigel, Dallas Times reporters-Junfei Liu and Lily Wang, Tawian World Journal reporter-Jingseng Liu and so on.

The two mayors presented their individual addresses to the audience: ``We welcome everyone who has come to partake of this venue. This special event serves to further multi-cultural integration and we praise Grand Master Sheng-Yen Lu for being such an extraordinarily attained spiritual master full of compassion and wisdom. His profound philosophy and ideology penetrated human heart.`` There were also a senator and congressman from other states had come to participate in the inauguration ceremony and the Dharma Assembly. The Dharma Assembly prevalently redeemed sentient beings and concluded satisfactorily perfect. The president of Sheng-Yen Lu Charity Fund Foundation (盧勝彥佈施基金會), Dr. Fo-Ching Lu Esq.(盧佛青博士) also presented an address to the audience: ``Be known that education is a milestone in one`s life and is currently in critical need, hoping that everybody brings forth your effort in carrying out works of charity as to further strengthen the Charity Fund Foundation and to widespread education and save lives.``

Next, the sole primary donor to the institution and building of the Temple at issue, Acharya Master Shi Lian-Dzen (釋蓮鎮) presented a sacred Hadar scarf to Grand Master as a respectful tribute and presented an address to the audience: ``My sincere gratitude to Grand Master, Acharya Master Shimu (師母蓮香) for their sacred visit at the Kalachakra Buddha Temple in Farmersville, Texas, and for conducting an inauguration ceremony, ritualistic institution and sanctification of the Temple and Kalachakra Dharma Assembly. My gratitude also extends to the supporting Acharya Masters and all volunteer co-devotees who had contributed collaboratively to the building efforts in the cause of today`s accomplishments.``

Grand Master also ritualistically swore eleven devotees to take the Vows of Lay Boddhisattva Precepts. He counseled the devotees: ``One must open oneself to the influx of the spiritually luminous Dharma currents at all times and shall abide by the Boddhisattva Precepts at heart; never forget them. Let the Boddhi Mind proceed straight from the heart as to redeem all sentient beings.``

The Dharma Assembly began solemnly on ritualistic proceeding. As Grand Master performed His routine of mudras (hand gestures), the mudras progressed with excellent fluidity and a continuous semblance to the Vajra Deity was noticed in His visage. This phenomenon suggests the Master`s complete spiritual interfusion with the Principal Deity- Kalachakra; neither differs from the other; they were all at oneness. At such, the audience were hence bewildered.

Next, Grand Master presented an exposition: ``First of all, let`s praise Acharya Master Shi Lian-Dzen (釋蓮鎮) for his unparallel effort in building the Kalachakra Buddha Temple entirely out of his own budget. Such an accomplishment that proceeded from his Boddhi Heart is unthinkably unprecedented by far. He gave forth his energy and resources to turn the Dharma Chakra (wheel) thrice, the Dharma Chakra (wheel) then turns thrice to redeem all sentient beings and it goes on continuously without beginning and ending.``

Grand Master also expounded extensively on the methods of spiritual communion with the Kalachakra Deity as to the significant signs at attainment of fruition of the Kalachakra Buddha-Dharma practice. He beseeched that by the greatest power of blessing of Kalachakra Deity, the attending and registered devotees and laity (in and out of bounds) shall be auspiciously blessed as to eradicate negative karmas and enhance good fortune, disastrous circumstances resolved, all pursuits fulfilled and all wishes granted. According to the Kalachakra Vajrayana Scripture, upon receiving empowerment of the Kalachakra Tantric Dharmas, one can be benefitted as follows: (1) As long as one received the empowerment and be steadfast in one`s faith, one shall attain Buddhahood within seven lifetimes even if one had not practice the Tantric Dharma at all. (2) As long as one received the teachings and hence engendered faith within, and those who received the empowerment and recited the mantra continually, shall be naturally exempted from various mishaps and misfortunes, such as disasters caused by tornados, floods, fires, earthquakes, wars, epidemics, diseases, incurable diseases, etc. (3) As long as one received empowerment and teachings and had not committed serious karmic deeds (or so-called ``sins``), one shall be reborn in another human form or be reborn in the Shamballa Realm of Pure Land or other realms of Pure Land. Moreover, one shall not be condemned to the Three Evil Destinies of Hell. All heavy karmas shall be diminished; all light karmas shall be abated.

Afterwards, Acharya Master Shi Lian-Dzen (釋蓮鎮) expressed gratitude towards Grand Master for His establishment of Sheng-Yen Lu Charity Fund Foundation (盧勝彥佈施基金會) enabling sentient beings to cultivate wisdom and fortune. He therefore offered his long-kept Dragon Vest as the bidding article at this charity fund drive, which he had bought at a True Buddha School`s charity fund drive many years ago. An age-old scheme called ``Throw a sprat to catch a whale`` was adopted as a modest spur to induce others to come forward with valuable contributions, whereby the proceeds was hence entirely funneled to Sheng-Yen Lu Charity Fund Foundation so as to prevalently practice alms-giving. The highest bid of one-hundred thousand dollars was offered together by Mu Dharma Brother and Mu Dharma Sister of California E-Rooh Society Chapter (一如雷藏寺穆師兄穆師姐).

The venue concluded with all attendees being blissful of Dharma and satisfactory as wished.
This Dharma Assembly in Farmersville of Texas, U.S.A. has been a splendid and dazzling event on record and shall continue to glitter the brilliance of True Buddha School`s history. This shall enter upon a new page in the chapter on the True Buddha Lineage. 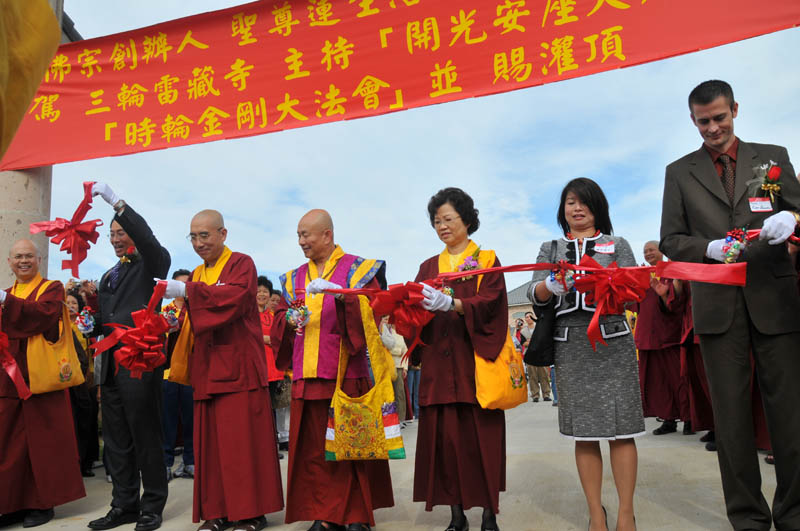 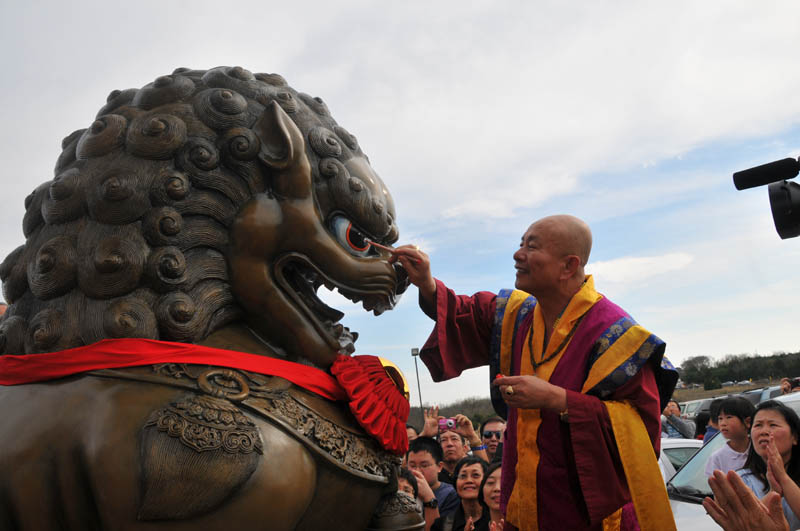 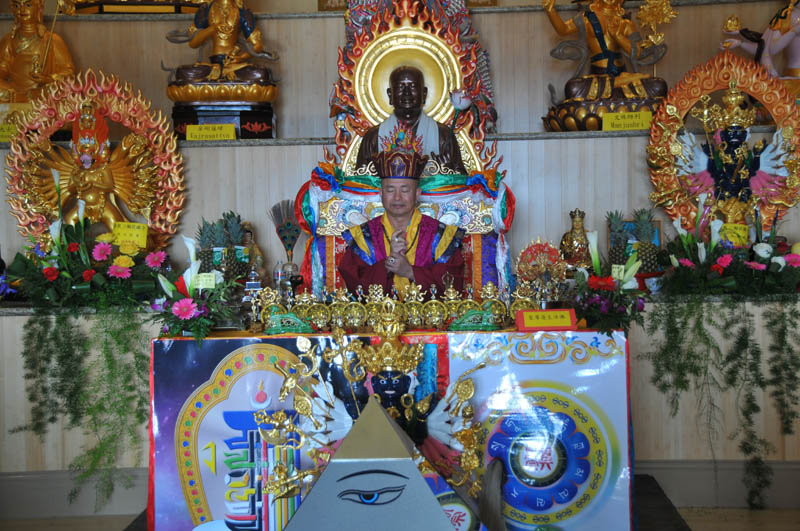 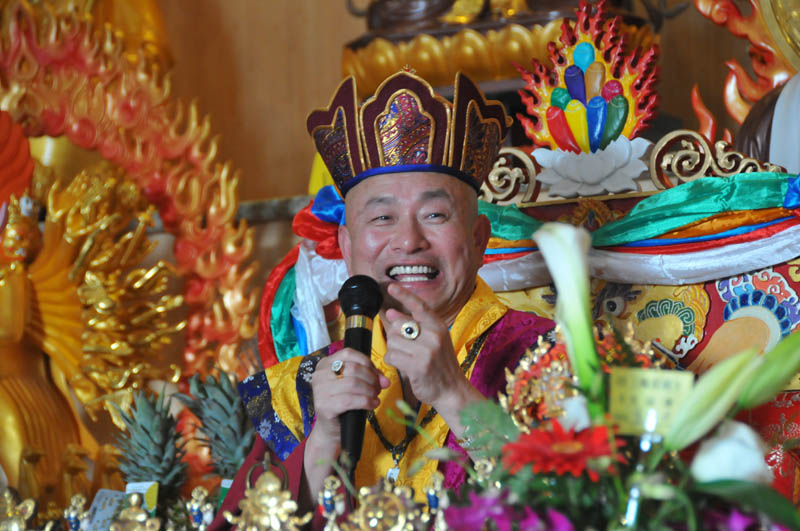