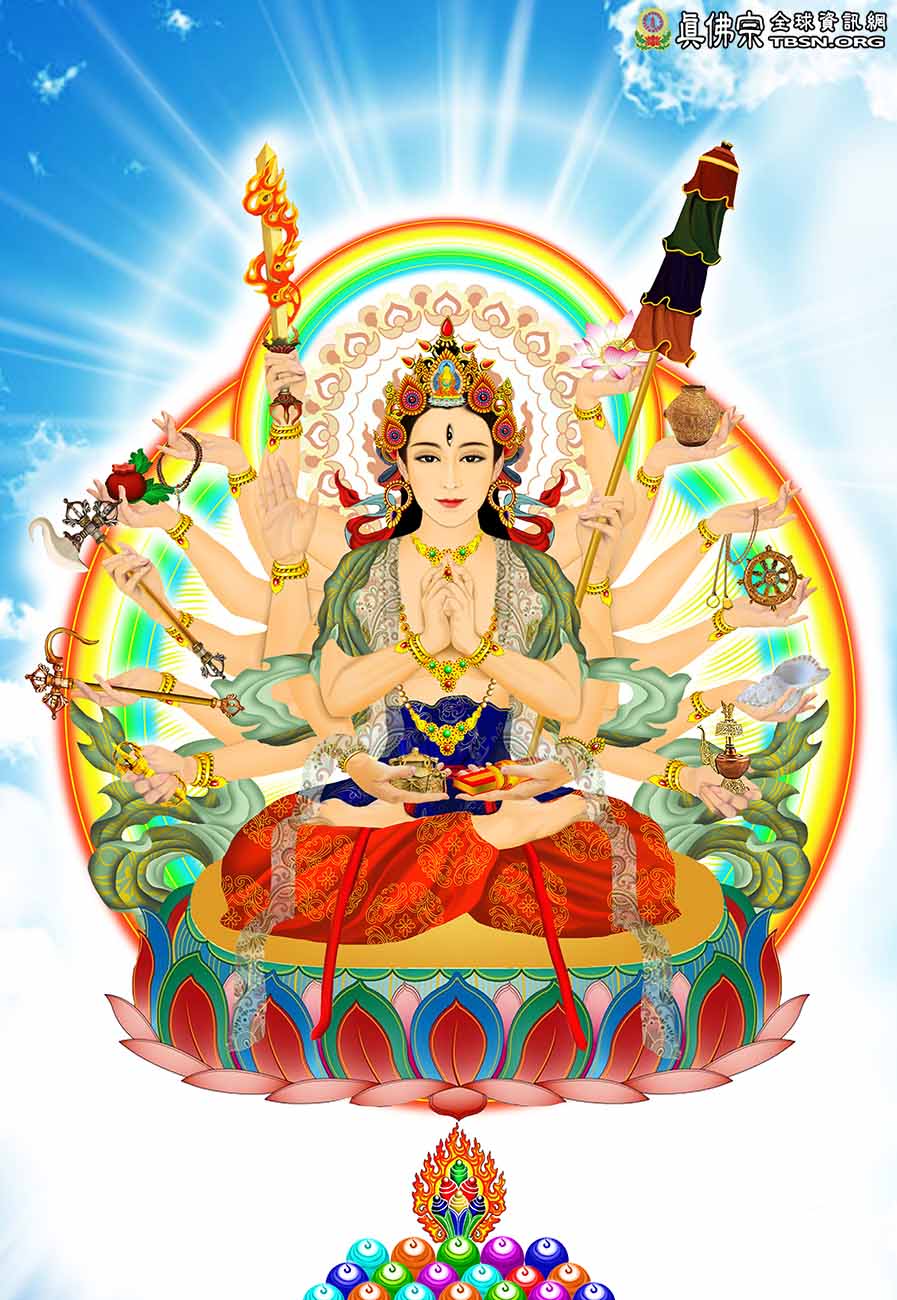 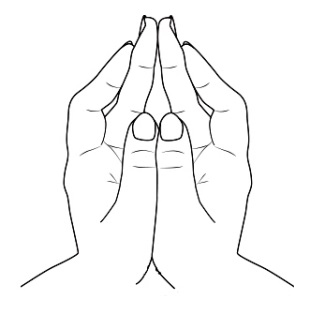 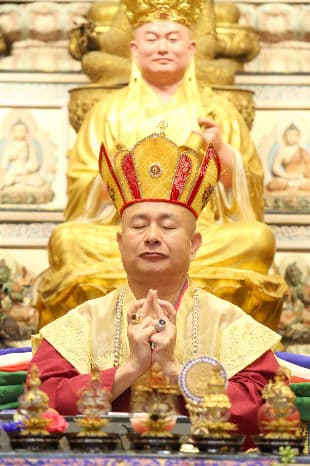 Interlace the little fingers and ring fingers of both hands inside the palms. Extend the middle fingers so their tips touch. Maneuver the index finger of each hand to press upon the back of each corresponding middle finger. Bring the thumbs together so they touch side by side. Hold the mudra in front of the chest. 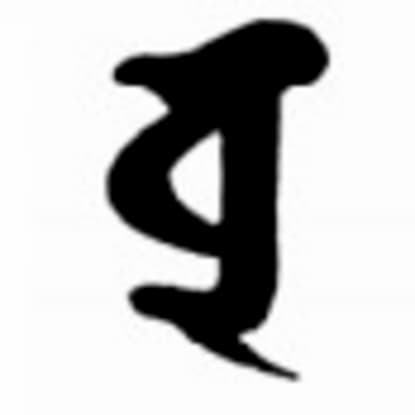 Her eighteen arms hold many different dharma implements while the original pair of hands form the Root Mudra (All-inclusive Mudra) in front of her chest. In a clockwise direction the dharma implements she holds in her hands are: a wish-fulfilling pennant, lotus, bathing vase, lasso, eight-spoke wheel, conch, precious vase, wisdom chest, headdress, vajra sceptre, hook, axe, heavenly fruit, mala beads, wisdom sword, and Fearless Mudra. Altogether there are eighteen hands. Her attendants are the Dragon Kings Nanda and Upananda who are positioned below the lotus throne.

Cundi Bodhisattva's background is extraordinary. She emerged from the Buddha's entering into samadhi transformed supernaturally from the Ocean Infinite As Void. Cundi is known also as the ''Cundi Buddha Mother of Seventy Billion Deities'' and the ''Divine Hero Guanyin.'' Being the mother of all the deities of the Lotus class, she is therefore known as the Buddha Mother, the Mother of seventy billion buddhas and bodhisattvas. The word ''Cundi'' means ''supremely pure.'' Cundi Buddha Mother has eighteen arms and three eyes. She therefore has awesome power. Her Tantric epithets are All-conquering Vajra, Wish-fulfilling Vajra and Purification Vajra.

The eighteen uncommon practices are able to annihilate the confusion and karmic hindrances of all sentient beings. One who practices this deity yoga is able to eradicate all past negative karma and avoid all calamities. All one wishes for in this lifetime, whether worldly or supramundane, the siddhis shall swiftly manifest. One may therefore take Cundi Buddha Mother as one's personal deity or as one's dharma protector. Her bodily color can be in white and yellow.

Cundi Buddha Mother's secret lies in her third eye. Tantric practitioners who seek to cultivate the third eye must visualize the third eye of the Buddha Mother emitting magnificent pure white light which shines upon one's own third eye (located in the brow-point) until one feels a tingling sensation at one's brow-point. After a long period of cultivation one will find that the mark of the ''Divine Eye'' appears on one's brow point. There is nothing hidden to the observation of one who has successfully cultivated the Divine Eye and nothing which cannot be known. The entire all-encompassing vastness of everything is within the Divine Eye! This is the secret hidden in Cundi Buddha Mother's third eye.

In the Mahaprajnaparamita-sastra these eighteen uncommon practices are:Living Buddha Lian-sheng discoursed that Cundi Buddha Mother practice is a supreme and wonderful dharma. If one knows how to apply Cundi Buddha Mother's eighteen implements for the eradication of calamities, curing of illnesses, increasing wealth, fulfilling wishes, receiving love and respect, harmony, subjugating enemies, or exorcising evil spirits, all the above may be perfectly accomplished.

If one has dharma implements in hand, in one's cultivation practice one may hold the implement and visualize it radiating light which shines upon or touches ''persons'' or ''affairs and undertakings.'' If one does not have dharma implements, one may visualize light from the implements held by Cundi Buddha Mother shining upon or touching ''persons'' or ''affairs and undertakings.'' This is the secret of secrets.