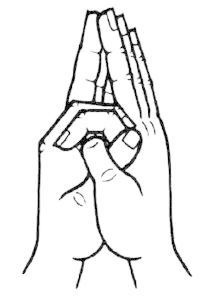 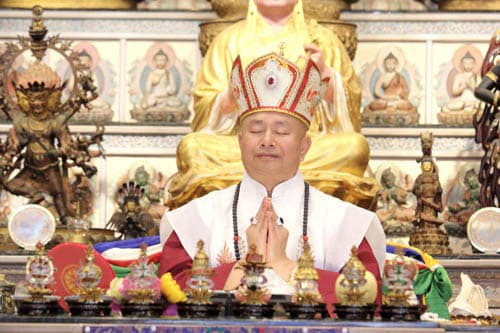 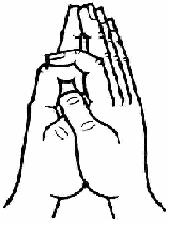 【Living Buddha Lian-sheng Sheng-yen Lu Dharma Talk - Amoghapasa Key Cultivation Formula】
Amoghapasa (Bu-kong-juan-suo-guan-yin in Chinese) is one of seven Guanyin in the Guanyin Court and an emanation of Guanyin. She is an extraordinary and magnificent Guanyin in the Garbhadhatu Mandala. Her dharma power is similar to Mahacundi Buddha Mother. The Vajrayana name of Amoghapasa is Equal Deliverance Vajra. Because Amoghasiddhi Buddha is atop her crown, Amoghapasa is a Guanyin of great significance.

Amoghapasa has three faces, each face having three eyes, and four arms. One hand holds a mala. This symbolizes that one will be delivered by reciting her name. One hand holds a lotus. This symbolizes rebirth from a lotus, eradication of calamities, elimination of karmic hindrances, and increase of good fortune. One hand holds a purification vase. This symbolizes that the nectar in the purification vase will immediately eliminate the karmic hindrances of all sentient beings including those in hell, hungry ghosts, and animals. One hand holds a lasso, symbolizing that one's wishes will be fulfilled by being tied up with the lasso. The lasso can also deliver one to the Western Pure Land of Ultimate Bliss. Because some netherworld beings are confused, willfully blind, or have a different agenda, they may be unwilling to be delivered to the pure land. However, if one prays for them to Amoghapasa, she will throw her lasso down, tie them up, and take them to the pure land.

The meaning of ''bu-kong'' (infallible) is that all one's wishes and desires will be fulfilled. Amoghapasa binds whatever one desires with the lasso so that, without exception, all one's wishes and desires will be accomplished. ''Equal Deliverance'' means that without discrimination as to virtuous or evil, good or bad, everyone will be delivered. Anyone who prays to Amoghapasa will receive the spiritual response and attain spiritual union with her.

Her greatest vow is her ''lasso'' and ''infallible.'' Amoghapasa is able to perfectly accomplish the eradication of calamities, enrichment, love and respect, and subjugation. Because her lasso is infallible, Amoghapasa can also be very helpful to those involved in legal proceedings. As one prays to her that one's legal case will proceed smoothly, she will throw out her lasso to tie up the troublemakers or evildoers one is involved with. Since one's opponents are immobilized while one is free, one's legal case will prevail. This is a good thing.

There is a secret cultivation formula for making offerings to Amoghapasa, Guanyin, goddesses, and dakinis. One may offer them foundation, lipstick, eyebrow pencils, mirrors, false eyelashes, loose powder, and rouge. By making these offerings, one can maintain one's own youthful beauty and have longevity. Amoghapasa has this kind of power.

The short mantra of Amoghapasa is: ''Om。a-mo-ga。pi-she-ye。hum-pan-zha。'' The syllables ''a-mo-ga'' are the name ''Amoghapasa.''
The Infallible Mani Offering Mantra and the Mantra of Light are transformed from Amoghapasa. They are vast and infallible offerings.

◎Infallible Mani Offering Mantra:
''Om。a-mo-ga。bu-jia。mo-ni。bei-de-ma。wa-ji-la。da-ta-ga-da。wei-luo-ge-de。san-man-da。bo-la-sa-la。hum。''
Reciting this ''secret'' offering mantra just three times is equivalent to making a vast offering. When out traveling on the road, one can recite this mantra three times.
Considering these truly extraordinary benefits, I (Grandmaster) hope everyone will recite this mantra. By reciting just this one mantra, one will be born on a lotus without ever being viviparous. By additionally reciting this mantra seven times in the morning and at night respectively, one will even be liberated from one’s anantarika-karma. This merit is, indeed, tremendous.
Typically, this is how I visualize. Notice that, at the very bottom of a thangka, there is usually an offering of rows of round containers with lids which are connected to each other. These containers are filled with the seven treasures, eight jewels, all kinds of medicine and everything else. These are called mani jewels. Visualize this offering transforming into clouds of offerings and recite the mantra seven times. This transforms the offering into a vast offering. Each time one visualizes in this way and recites the mantra seven times, one makes a vast and extensive offering.

The Mantra of Light is the Mahamudra of Infallible Vairocana Buddha. This mantra possesses the brilliant light of the precious lotus. It transforms karmic transgressions and eliminates catastrophes, resulting in attainment of the indestructible bodhi mind.

More about Amoghapasa Dharma:
!!Please be aware that before anyone can practice the above uncommon practices, it is advised and recommended that they take refuge and the respective empowerment; alternatively one must face inherent resulting cause and effect!!