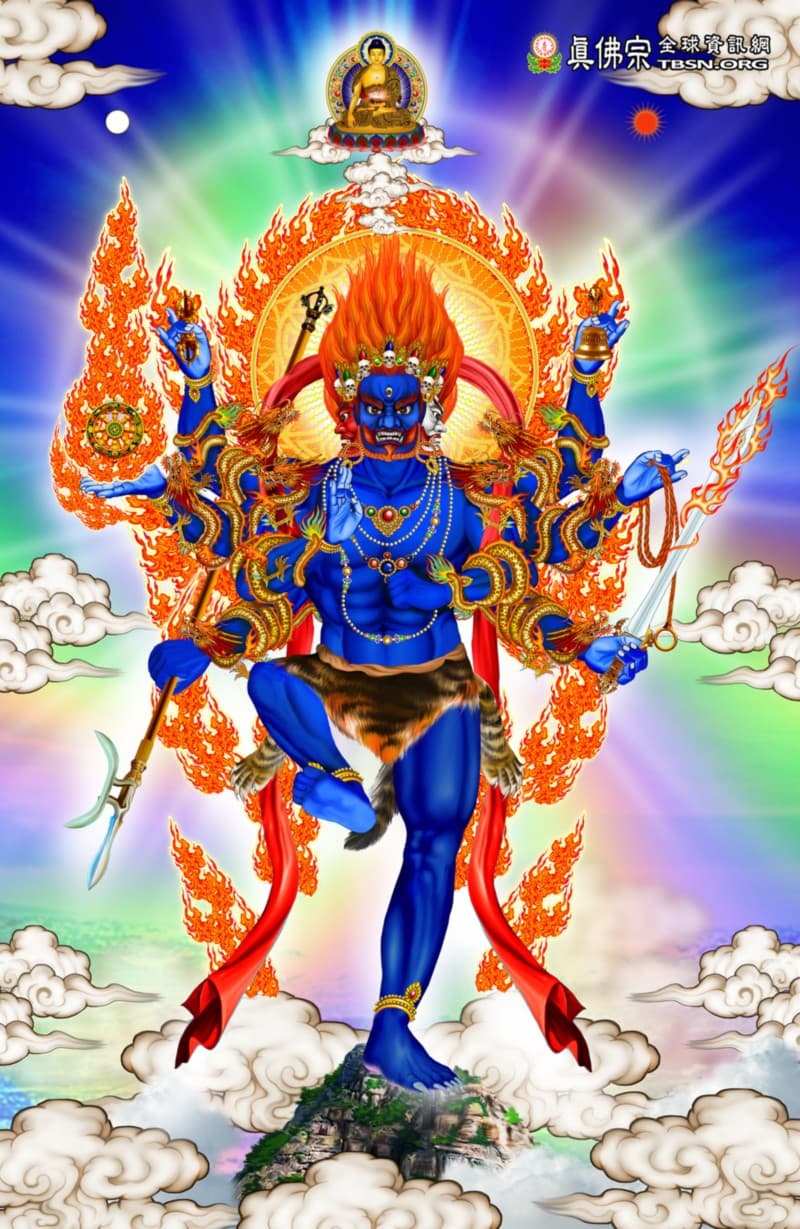 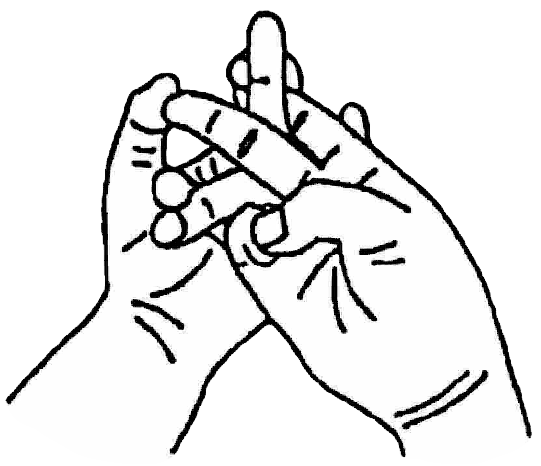 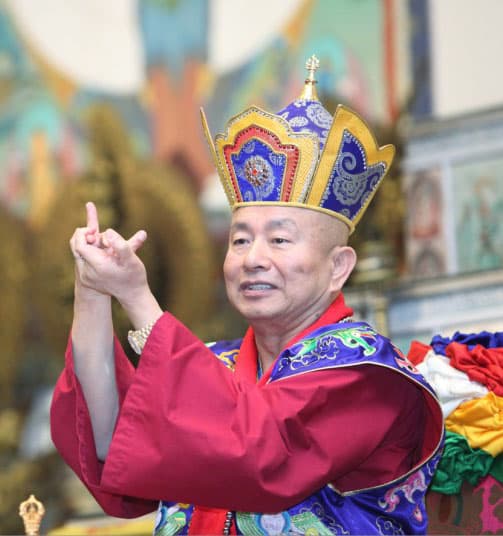 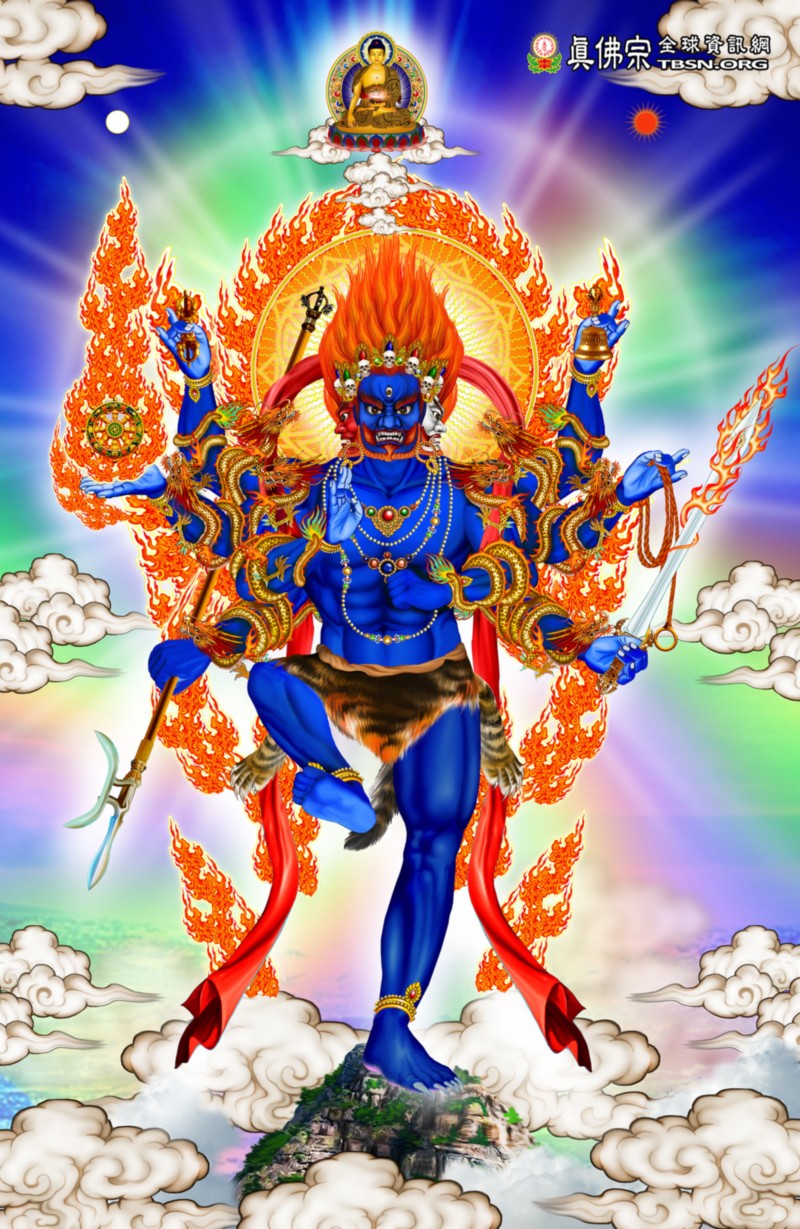 Ucchusma has three faces, eight arms, nine eyes, a black-blue body, and red stand-up hair. Each arm is wrapped by a dragon. In front of his chest, his right hand forms a ''Mountain-open Mudra'' while his left hand forms a ''Grand Summon Mudra.'' The Dharma implements held by the rest of his six arms are a vajra bell, a vajra scepter, a Dharma wheel, a halberd, a lasso, and a sword.
With his left leg stepping on top of a mountain, his right leg raises up as if he is soaring up in the air. His entire body radiates vibrantly with a wrathful looking face.

【Living Buddha Lian-sheng Sheng-yen Lu Dharma Talk - Ucchusma Background and Key Cultivation Formula】
Ucchusma is respectfully known as the Buddha of the Esoteric Ones, Mighty Kings of Great Supernatural Power. The reason he is named Ucchusma is because of his ability to destroy filthy negative energy.
Ucchusma was manifested by Shakyamuni Buddha to become the Buddha's embodiment of the wheel of injunction. Other names of Ucchusma include, ''Fire Head Vajra'', ''Indestructible Vajra, '' ''Vajra of Filth'', ''Tactile Vajra'', and so forth.

Back when Shakyamuni Buddha was sitting underneath a sal tree by the Vati River and was on his way to enter nirvana, there was a deva by the name of ''Conch Chigon Deva'' who did not attend this event. Junior mantra chanting immortals went to invite him to attend but they failed. Vajra chanting immortals went to invite him as well. Conch Chigon Deva still didn't show up after 7 days. Therefore, Shakyamuni Buddha, with an aura of eternal blissful tranquil light used his Great Wisdom Supernatural Powers to manifest the ''Indestructible Vajra'' out of his left heart chamber. The Indestructible Vajra immediately soared up to the place of the Brahma King and transformed the filth to earth by pointing at it, which restored the divine power of both mantra chanting immortals and thereupon initiated the Brahma King to come for the Buddha.

Above is the condensed sutra passage for the Buddha of the Esoteric Ones, Mighty Kings of Great Supernatural Power or Ucchusma. Ucchusma is a Wisdom King manifested from the heart of Shakyamuni.

Ucchusma is noted in the Ucchusma Vajra Sutra, Shurangama Sutra, and the Ucchusma Wisdom King Sutra. His merits are immense. He removes illnesses, eradicates calamities, enables one to acquire people's love and respect, prevents accidents from happening, allows one to receive great luck and fortune, subjugates enemies, and dares evil demons and ghosts to invade. His primary vow is to eat up all unclean objects.

Because Ucchusma is full of yang energy, one who succeeds in this dharma practice will not be afraid of any filthy contamination. One can go to any happy or sad gatherings, mortuaries, hospitals, or cemeteries. It is most effective for ones who already have many daughters and desire to give birth to a son.

This deity goes anywhere. Some deities and buddhas will not draw near to any filthy atmosphere. However, this deity is different. As long as you invoke him and receive spiritual response from him, he will descend. Even if you invoke him while ''on a lotus'' in a restroom, he will still descend. Not only that, he will additionally clean off the filth for you.

Therefore, if one has offended a spiritual being while attending a funeral or a wedding, or while visiting a temple or going to a place where ''yin'' energy is predominant such as a hospital, a funeral parlor, or a graveyard, as long as one has invoked this deity following one everywhere, one can rest assured, because all filthy, negative atmospheres will be eliminated.

As long as a practitioner has recited the Ucchusma mantra for a long time, all kinds of negativities, violations, offenses against spirits, spells of black magic, or illnesses caused by demons can mostly be eliminated. Ucchusma is therefore a Vajra Deity who specializes in curing disease and sickness.

There is another special characteristic of this deity. When you visit a casino there will be many strange and bizarre gambling ghosts inside. However, as long as you invoke Ucchusma all the gambling ghosts will scatter and disappear as soon as you enter the casino!

Generally speaking, when invoking buddha to descend, one would be considered unclean if one does not take a bath, brush their teeth, or wash their face. However, if Ucchusma is the deity whom one is invoking, he will descend and eat filth off your body. Japanese enshrine Ucchusma in restrooms for the reason that he cleanses the filth within. However, I feel that it is kind of disrespectful to enshrine him in restrooms, so we will not do it.

The Ucchusma Practice is one of the five Wisdom King practices. It is a supreme and great esoteric dharma. Before practicing it, one must chant ten times of ''Namo Ben- shi Shi- jia-mou-ni Fo, Namo Hua-shen Shi-jia-mou-ni Fo, Namo Hui-ji Jin-gang Da-chuan Shen-wang Fo or Namo Da-chuan Shen-wang Fo. (Namo Fundamental Teacher Shakyamuni Buddha, Namo Manifestation Body Shakyamuni Buddha, Namo Ucchusma the Great Sovereign Divine King Buddha or Namo the Great Sovereign Divine King Buddha.) '' One must chant this way ten time for the practice to be effective. It is to go back to the source.

Ucchusma is Shakyamuni's hidden treasure, a hidden treasure within his heart. There were two very extraordinary Dharma protectors who first appeared at the True Buddha School. One was Acala and the other was Ucchusma. Their appearance has a great secret hidden meaning. This is because when I was in meditation long ago, Ucchusma told me that he would protect all of the True Buddha School's disciples.

Ucchusma possesses magnificent authority and great supernatural power.
If one has spirits attached, whose house is often unclean, or is bullied by ghosts, one only needs to form the Ucchusma mudra and chant his mantra seven times. All the ghosts around will transform into bloody water. Their heads will split and they will not survive. All of them will be extinguished.
After one chants his mantra 100,000 times, Ucchusma will spiritually appear to fulfill their wish.One can treat and cure other's illnesses after one has completed 400,000 recitations of his mantra.
When one is chanting, the mind, speech, and ear must be unified as one. This is a very good method. However, the best way is to chant in front of the altar.
One may set up an Ucchusma altar with his statue or with only his vajra scepter inserted into a pile of rice. During normal times, one can just offer incense and flowers. However, one offers five meats and the five ambrosia of Vajrayana during esoteric practices.

Second, during the formation of the mudra and visualization, first visualize Shakyamuni appearing. Form Shakyamuni's mudra by straightening the thumbs, middle and pinky fingers. Bend the index and ring fingers. Then, put both hands together facing each other in front of the chest. The next step is to visualize Ucchusma. Form the Destroy and Subjugate Mudra by having the left hand hold a corner of the kasaya and the right hand pressing the ground with all fingers stretched. This is the Destroy and Subjugate Mudra of Ucchusma.

Third is the essence of the visualization. First visualize blue lights emitting from the heart chakra of Shakyamuni Buddha. These blue lights ascend above the centre of Shakymuni Buddha's crown. The blue lights transform into Ucchusma the Great Sovereign Divine King Buddha with three faces, eight arms, and nine eyes. His hair is red; body, blue; arms, black; faces, cyan; and appearance, wrathful. Ucchusma is standing in the middle of the sky. At this moment, a hum syllable in one's heart emits blue lights that are in resonance with the blue lights of Ucchusma for a long period of time. Chant the mantra after the visualization.

!!Please be cautioned that before anyone can practice any uncommon dharma practices, they are advised and recommended to take refuge and the respective empowerment. The alternative is to be responsible for facing inherent cause and effect!!

⓪Please check the True Buddha School website regularly for the latest news about Living Buddha Lian-sheng and ''be with Buddha'' always.
⓪Welcome fans (Vajra Dharma Protectors) of the Official English True Buddha Facebook site to invite their friends to join the Fan Club. Better yet, click ''Like'' and ''Share.'' Let us together spread the name of Dharma King Living Buddha Lian-sheng to every corner of the world!!