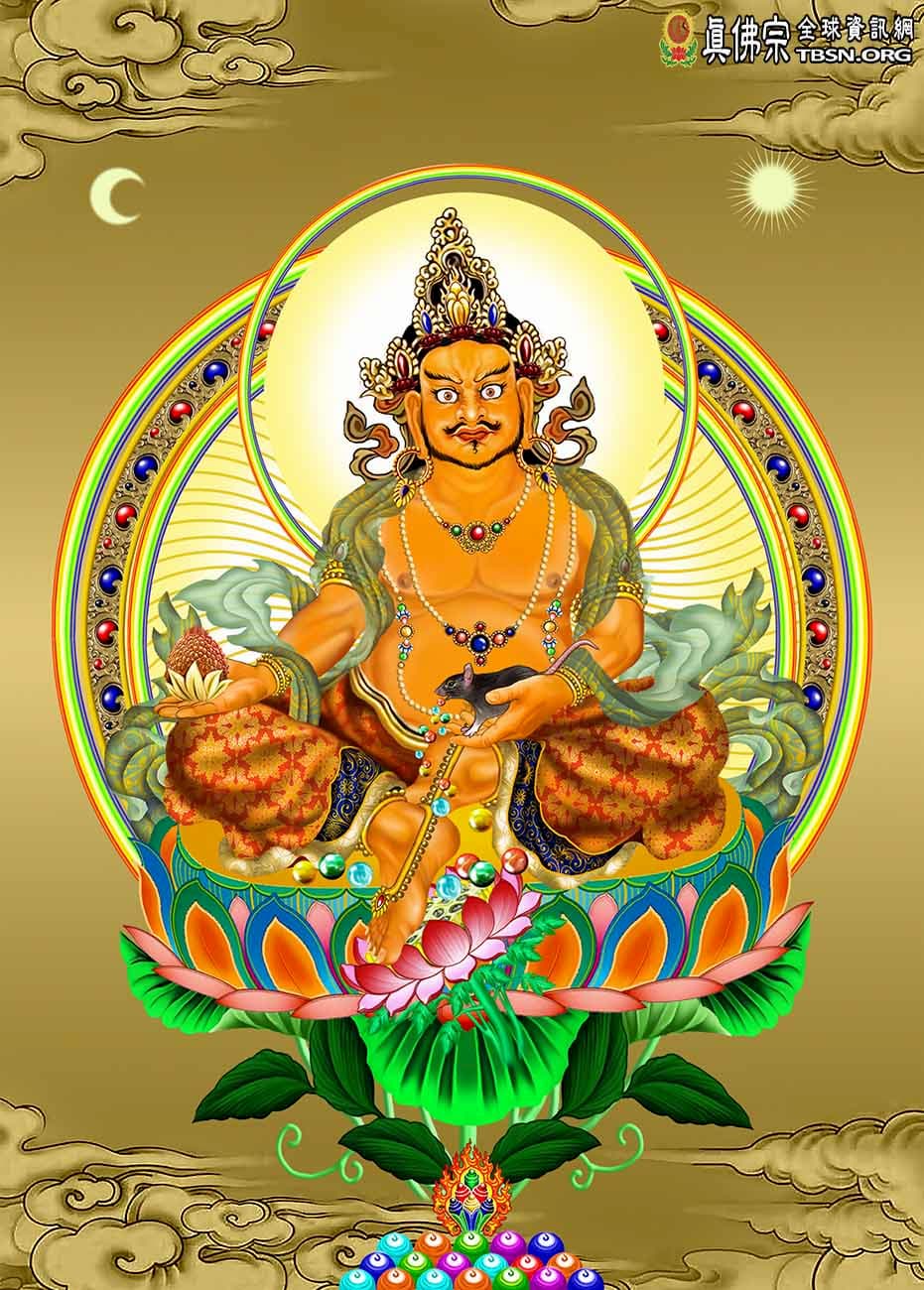 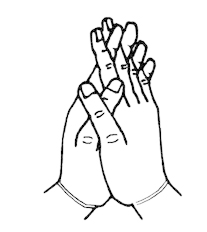 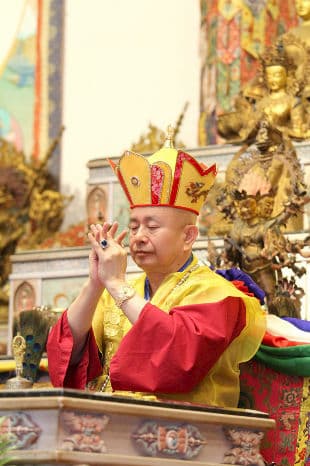 In Tibetan Buddhism, Yellow Jambhala (Duowen Tianwang) is yellow and sits in a half-lotus posture. He wears a gold crown adorned with precious gemstones and gemstone chains on his body. His round face appears prosperous and slightly fierce. His right hand holds a pomelo -shaped treasure object and his left hand holds a treasure-spouting mongoose, which can spout unlimited treasure.

【Living Buddha Lian-sheng Sheng-yen Lu Dharma Talk - Yellow Jambhala Background and Key Cultivation Formula】
Yellow Jambhala is an emanation of Duowen Tianwang, namely Vaisravana. In Buddhism, Vaisravana is one of the Four Heavenly Kings protecting worlds. He is a celestial deity who protects Buddhadharma and has the divine nature of bestowing wealth and fortune.
Yellow Jambhala is the one and only fortune deity of the Eight Personal Deities of the True Buddha School.

The northern Vaisravana (Yellow Jambhala) lives north of the Four Heavens and protects the continent of Uttarakuru. He resides in the northern crystal palace located at the fourth level of Mt. Sumeru. His retinue is composed mainly Yakshas and Rakshasas. So, how does one go about increasing one's accumulation and wealth? The first thing to remember is to make offerings to Rakshasas.

For example, when performing the Nectar Offering, we recite the following verse ''da-peng-jin-chi-niao (To the great Garuda), luo-cha-gui-zi-mu (To the Rakshasas and to Hariti), kuang-ye-gui-shen-zhong (To the multitude of ghosts and spirits in the desolate wilds), gan-lu-xi-chong-man (May you all be filled with nectar.)''
We make offerings to Rakshasas because they constitute most of the retinue around the Four Heavenly Kings. Offering to Rakshasas is equivalent to offering to Jambhala, a wealth deity. As long as one understands to make offerings to Rakshasas, Jambhala will be the direct beneficiary. He will begin to like you and you will accumulate good fortune, such as increase in overtime pay, professional promotion, salary increase, more prosperous business, constantly receiving new purchase orders, etc.

In the celestial realms, it is the Four Heavenly Kings who are the richest. The Four Heavenly Kings are Northern Duowen Tianwang (Vaisravana), Chiguo Tianwang (Dhrtarastra), Zengzhang Tianwang (Virudhaka) and Guangmu Tianwang (Virupaksa). The Four Heavenly Kings are able to bestow good fortune, wealth, longevity, and auspiciousness.
In the human realm it is Prthivi, mountain gods, and earth gods who are the richest.
In oceans, lakes, wells, rivers, and streams the Dragon King is the richest.
In the heaven realm the richest deity is the Vaisravana Yellow Fortune Deity (Jambhala) who is also the greatest of the wealth deities.
Vaisravana (Yellow Jambhala) has the essential nature of protecting Dharma. He is a Vidyaraja who protects and supports Buddhadharma and possesses the greatest wealth and fortunate rewards.

In Eastern Vajrayana, Yellow Jambhala (Vaisravana) holds a pagoda which can spout unlimited treasure. He bestows this treasure on sentient beings and blesses them with great luck and merit. Prthivi supports Vaisravana's feet and two Yakshas, Lamba and Vilamba, are at his left and right sides respectively. He is a great, wealthy, heavenly king guarding the north. Vaisravana is one of the Seven Lucky Gods who bestow wealth and good fortune.

In cultivating Yellow Jambhala Personal Deity Practice, Dharma King Living Buddha Lian-sheng Sheng-yen Lu considers the key practice instruction to be ''Giving is the cause of good fortune.'' One must first understand the principle of ''giving.'' ''Giving'' means that one gives everything one has to sentient beings. The three types of giving are:
Giving of wealth
Giving of Dharma, and
Fearless giving.
What one should learn from Yellow Jambhala is his broad and generously giving heart. Therefore, one must first learn to actually practice giving. For those who don't have money to give, there are three extremely important offerings to practice:
First, learn to transform food and offer it to Hungry Ghosts and Rakshasas.
Second, make food offerings to sangha.
Third, thoroughly master the ritual of offering to Yellow Jambhala.
When practicing Yellow Jambhala, one must invoke the Five Buddhas by reciting the Invocation Mantra. The Five Buddhas emit five-colored lights which empower Yellow Jambhala. Recite the Empowerment Mantra, and visualize that the swelling of the right big toe of Yellow Jambhala disappears. There is a secret: when the empowerment of Yellow Jambhala is completed, one continues on to visualize oneself also being empowered by the five beams of lights. One's karmic obstacles are thereby eliminated, painful illnesses are diminished, and one is able to obtain great good fortune. This is one of the ''secrets of secrets.'' One then continues on with the recitation of the mantra of Yellow Jambhala: ''Om, jum-bah-lah, chan-lan-chan-nah-yeh, so-ha.''

We first use wealth to attract people to Vajrayana practice. We then gradually guide them to tathagata wisdom. As stated in the Vimalakirti Sutra, this is ''tempting with desire and entering into buddha wisdom later.''
Yellow Jambhala was selected from the beginning because, of the Four Heavenly Kings, Yellow Jambhala has the greatest affinity with the Chinese people.

All sentient beings are themselves a ''great merit field'' as long as they have faith in the karmic cause and effect of Vaisravana, cultivate the Yellow Jambhala Practice of the True Buddha School, uphold the five precepts and ten virtues, sever all evil affinities, always follow the True Buddha discipline and precepts, make offerings to the Root Guru and the Three Jewels, print and distribute virtuous books and Buddhist sutras, and perform all of the above persistently and unflaggingly. These type people will definitely ascend to the celestial realm upon their death. They will be reborn in any of the thirty-three heavens just as they desire. They may also go to the abode of Vaisravana and enjoy the abundant and exquisite heavenly pleasures, the five types of supernatural powers and the blissful freedom of liberation.

Those who practice this dharma will extinguish all the suffering of poverty in the six realms, eradicate all disasters and calamities, subjugate evil spirits and enemies, increase their store of good fortune and virtue, extend their lifespan, grow in wisdom, receive total love and respect, protect their motherland from disasters, cause the place where they live to be peaceful, always enjoy a good climate, attract wealth and treasure to themselves, have infinite virtues, and command magnificent dharma power.