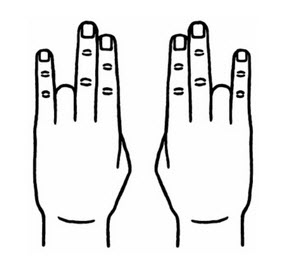 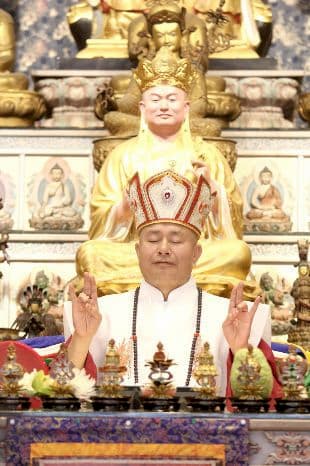 Open the palms facing outward. Bend the ring fingers and press them with the thumbs while keeping the other fingers straight. Hold the mudra in front of the chest. 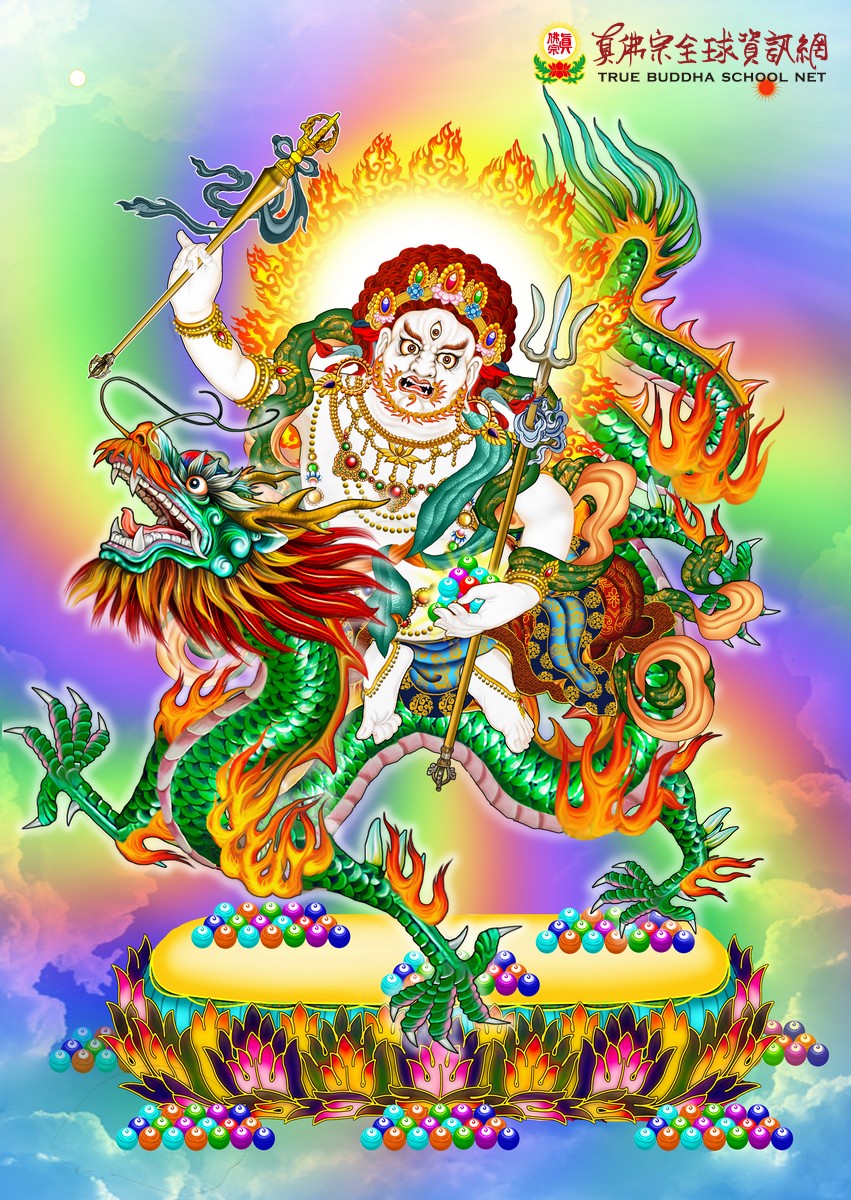 White Jambhala is depicted with a white body, one face, two arms, three eyes, and red hair. He wears a small Five-buddha Crown. Short and strong with a big belly, he rides a green dragon. He holds a khatvanga in his right arm, a wish-fulfilling staff in his right hand, and either a cloth sack or treasure in his left hand. He is surrounded by the four dakinis of east, south, west, and north. Avalokitesvara Bodhisattva, who is his origin, is above him.

Additional offerings required for this white fortune god include ''two whites and three sweets.'' Stir fried flour and milk are the two whites. White sugar, rock candy, and honey are the three sweets.

The mandala of Dragon-riding White Jambhala should be arranged as follows: The deity is in the center of a white plate which is in the center of a round table. The height of the round table should closely match one's stature. The deity is surrounded by seven cups of bathing water within the plate. Triangular crystals are placed between the cups. Arrange flour, milk, white sugar, rock candy, and honey on the round table. One may then arrange the five offerings of incense, flowers, lamps, tea, and fruit. The seven or eight standard offerings are also acceptable. The arrangement of those five, seven or eight offerings is as usual.

When visualizing, one forms the Dragon-riding White Jambhala Mudra which is the Flicking Water Mudra, that is, one flicks and taps the bathing water with the mudra. The key element of the visualization is the water offering; visualize the water transforming into a dragon, a green dragon emerging from the water. When performing the bathing, one visualizes the water as a green dragon in the void spewing water to bathe White Jambhala. This is how one performs the visualization.

After one finishes the Practice of Dragon-riding White Jambhala, one forms the Flicking Water Mudra with both hands, then taps one's mouth with the water on the mudra as if ingesting the water. This symbolizes that wealth is not lost to outsiders. One taps the water on one's mouth one time, then flicks the water to invite White Jambhala to bathe. Afterwards, do not discard the seven cups of bathing water. Flick the water throughout one's residence.

When flicking the water after one has finished the practice, one first visualizes inviting Dragon-riding White Jambhala to bathe followed by visualizing the water transforming into wealth. Visualize piles of NT$2000 bills and US$100 bills falling from the sky, filling one's house. This is how one cultivates the Practice of White Jambhala, a deity who brings abundant wealth and good fortune. While flicking, one may visualize gold bars falling from the sky, one after another, filling one's house. One becomes the master of a house full of gold. When flicking the water, whether USD or NTD, one visualizes not just one bill, but a whole pile of bills. Be particularly careful when visualizing gold bars. Do not visualize them falling from above one's head, or one will be crushed. Visualize the gold falling at a distance. One should flick the water everywhere.

White Jambala Praise Verse:
''Seeing sentient beings impoverished and suffering,
Reincarnating to save them while shedding tears of sorrow,
A precious body white as a snowy mountain
Surrounded by dakinis of the four directions
Holy deity who protects and supports with wealth and good fortune
I now take refuge and pay homage''
One should know to praise White Jambhala in this way.

One dedicates the merit as follows:
''Great Holy Red Crown Master
Bless the descending White Jambhala
So wealth and auspiciousness may be bestowed
On we the infinite sentient beings.''
This is the dedication.

Reverend Liaoming transmitted the Practice of Dragon-riding White Jambhala to Grandmaster and instructed that the most important part of the practice is the bathing water. When cultivating this practice, prior to flicking water to bathe the Dragon-riding White Jambhala, one should tap the bathing water with the mudra and lick the water on the mudra. Licking the water increases the vital energy (qi) of wealth. That is, the vital energy of wealth and good fortune in one's body will be increased. After cultivating this practice, one's superior will see one very favorably, consider one's work outstanding, and raise one's salary. When one's vital energy of wealth and good fortune is increased, one's business will also go more smoothly.

Practice for Using Bathing Water to Collect from Debtors: What can one do when debtors don't pay their debts? One can use the bathing water and pray. As in the previously described practice, use the bathing water and pray for Dragon-riding White Jambhala to descend and give his blessing, so that, upon encountering the debtor, one will be able to collect the debt from such and such debtor who lives at such and such address. This is a method to collect debts. After praying, pour some of the bathing water in a cup and take it to the debtor. Think of a way to make the debtor drink the water. Once the debtor ingests the water, the Dragon-riding White Jambhala will enter the debtor's heart. The debtor's honest and virtuous nature will then manifest.

Practice for Finding Treasure with Bathing Water: Find a stalk of green bamboo and cut it to a length that is a multiple of seven. A multiple of seven symbolizes the largest number. Tie a piece of white cloth around the top of the green bamboo. Wet the white cloth with the bathing water. One then prays to Dragon-riding White Jambhala for help in finding a treasure. One walks around while holding the green bamboo stalk tied with a white cloth wet with the bathing water. One's hand will tingle when coming upon a treasure. The treasure will be located where one receives magnetic response. This is a method to find a treasure.

⓪Please check the True Buddha School website regularly for the latest news about Living Buddha Lian-sheng and ''be with Buddha'' always.Welcome to download the user friendly True Buddha Video App from Appstore or Google Play. With the app you can see more of Grandmaster''s marvelous videos and live webcasts. It is the speediest vehicle to ''keep you synchronized and be with the Buddha!''
Official True Buddha School Net (TBSN):
Home page: http://tbsn.org/
Indonesia Home Page: http://tbsn.org/indonesia/
Official Facebook Pages:
Chinese: www.facebook.com/syltbsn
English: https://www.facebook.com/syltbsnenglish
Indonesia: https://www.facebook.com/syltbsnindonesia
⓪Welcome fans (Vajra Dharma Protectors) of the Official English True Buddha Facebook site to invite their friends to join the Fan Club. Better yet, click ''Like'' and ''Share.'' Let us together spread the name of Dharma King Living Buddha Lian-sheng to every corner of the world!!