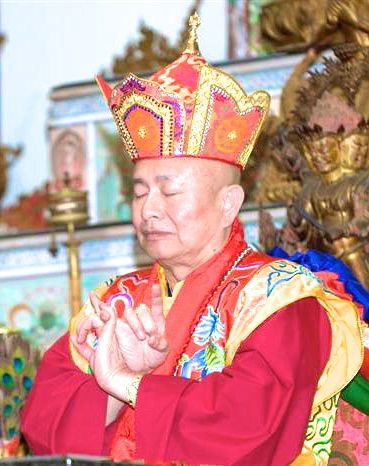 Cross the hands, with the right hand in front of the left so that they are back to back. Hook the two little fingers onto each other. Extend the index fingers so they point to the sky at an angle. Press the thumbs upon the middle and ring fingers of each hand respectively so that they clench. Hold the mudra at chest level. 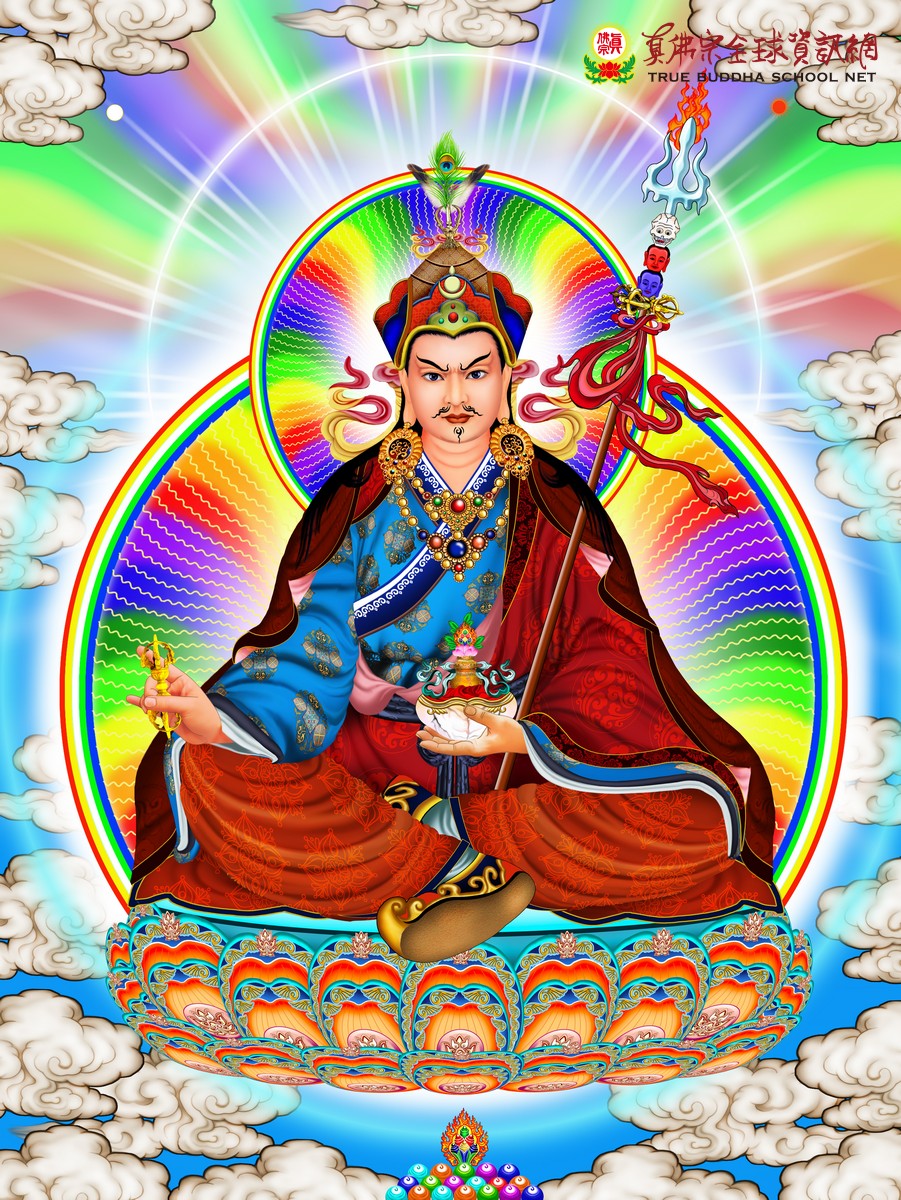 Padmasambhava wears a jewel crown. His body is pink, he holds a vajra scepter in his right hand, a nectar-and-jewels filled skull cup in his left hand, and a trident staff (khatvanga, authority staff) in the curve of his left elbow. He sits on a moon disc atop a lotus and his body radiates the light of hundreds of jewels.

【Living Buddha Lian-sheng Sheng-yen Lu Dharma Discourse - Padmasambhava Background and Key Cultivation Formula】
Padmasambhava, the Lotus-born Guru, is also called the Sea-born Vajra. He was born a lotus youth inside a five-colored lotus on the Danakosha Sea in Western India. He is the vajra emanation of the three secrets of body, speech and mind of Amitabha Buddha, Guanyin Bodhisattva, and Shakyamuni Buddha.

The reason Padmasambhava is called Guru Padmasambhava is because he was born inside an enormous lotus in the Danakosha Sea. Therefore, he is a genuine Padmakumara. In ancient India, a lake was referred to as a sea.

At the invitation of the Tibetan King Trisong Detsen, Padmasambhava came to Tibet from India to transmit the Buddhist teachings. While in Tibet, Padmasambhava subjugated all the Bonpo spirits and converted them into protectors of the Vajrayana teachings. Padmasambhava became the first lineage guru of Tibetan Buddhism, and it was through his efforts that Vajrayana Buddhism spread to the entire world.

Padmasambhava spread Buddhadharma in Tibet for fifty years and established Semye Temple (Ren Yun Temple). He is known as Guru Rinpoche by the Tibetan people, and is venerated as the greatest and most precious lineage master by all four schools of Tibetan Vajrayana Buddhism. It is due to the great blessings of Padmasambhava and the foundation that he laid that Buddhism has flourished in Tibet up to the present day. If one enters into spiritual union with Padmasambhava, he will become one's guru, personal deity, and protector.

Padmasambhava has the highly secret vajra dharma within his body. He has the vajra nature within his body. With the vajra nature, he is thus able to vanquish all heretical paths and destroy all black magic. All ghosts and spirits must obey any orders he may give them. The greatest secret is ''Vajra Nature to Subjugate Demons.'' Padmasambhava is a wrathful Vajra who is able to subjugate demons. If oppressed by evil spirits, one need only cultivate the dharma of Padmasambhava and touch the evil spirits with the red light radiating from the vajra mudra. The evil spirits will run away and never again try to harm a good and virtuous person.

The secret of the personal deity practice of Padmasambhava can eliminate illness, give longevity, ensure that one always has sufficient food, provide great good fortune, eradicate all kinds of disasters and difficulties, and prevent the occurrence of calamities and misfortune. Family destiny will be highly auspicious; if one seeks children one will have children, and if one seeks wealth one will obtain wealth.

Padmasambhava has reached complete and perfect enlightenment and the attainment equivalent to that of the Five Wisdom Buddhas. He has the expedient means to deliver sentient beings, and all his capabilities are complete and perfect in every way. He is able to fulfill the wishes of sentient beings and bring them every kind of benefit. His five Buddha Mothers are Yeshe Tsogyal, Mandarava, Kalasiddhi, Sakya Devi, and Tashi Kyedren.

Padmasambhava is an adept of both the Sutrayana and Vajrayana teachings, making no distinction between them. From Shakyamuni, he obtained the in-depth key lineage formula for the absolute and supreme siddhis of Sutrayana and Vajrayana in an authentic lineage. Padmasambhava has perfected all three karmas of vajra body, speech and mind, the three bodies of Dharma body, enjoyment body, and emanation body, the secret key instructions for attaining enlightenment, as well as the expedient means of purification, enrichment, magnetization, and subjugation for the purpose of salvaging sentient beings.

It was Padmasambhava who originally brought Vajrayana to Tibet, and he is revered by all the schools of Tibetan Buddhism-Nyingma, Gelug, Kagyu, and Sakya. An extraordinarily large number of Dharma teachings have been transmitted by Padmasambhava, the greatest of which is the Vajrayana Great Perfection.