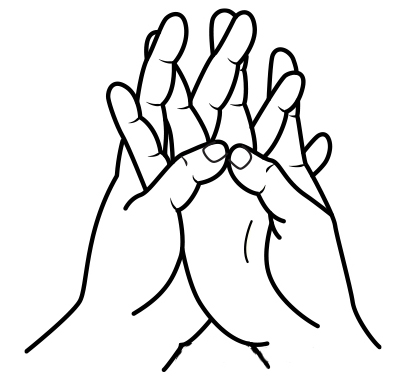 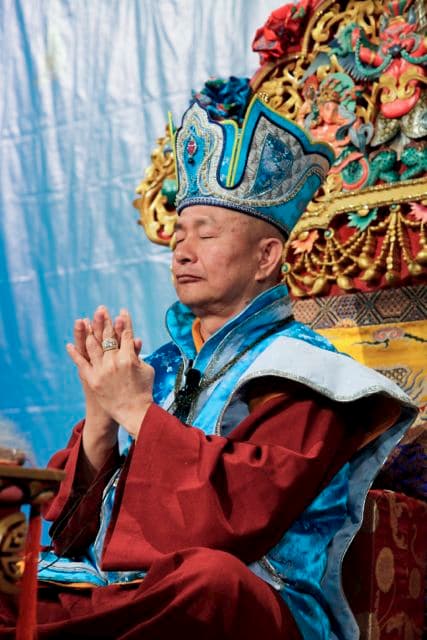 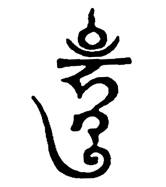 The five elements, earth, water, fire, wind, and emptiness, manifest above the wheel of time. Mount Sumeru is in the center. At the peak of Mt. Sumeru, a large lotus appears with a sun-moon disc in the center of the lotus. Atop the sun and moon discs, Kalachakra appears embracing the Buddha Mother.

He has four faces, three necks, six shoulders, twelve arms, and twenty-four hands. Each hand holds a dharma implement. Both his feet step on Mahesvara and Mahesvara's consort. His center face is blue in color; right face, red; back face, yellow; and left face, white. Kalachakra's Buddha Mother is naked. Both the Buddha Father and Buddha Mother have three eyes. They embrace each other in unification while standing.

Kalachakra's four faces represent body, speech, mind, and the great bliss of emptiness, wisdom, and form. His white left neck, red right neck, and blue center neck represent the three channels inside the body. His left leg is white and his right leg is blue. Wearing a tiger skin skirt embellished with pearls and jewels and adorned with a vajra scepter in his topknot, he looks dignified and majestic.

Kalachakra is namely the giant wheel of time as time turns like a great wheel. Everything is destroyed as the wheel turns through ''Birth, old age, sickness, and death.'' This is Kalachakra. When time does not exist, that in itself is eternity, lasting forever, which is the ultimate goal of Kalachakra; attainment of Buddhahood, bodhisattva, sravaka, pratyekabuddha, or arhat.

Vajrayana branches into many dharmas, such as the Four Preliminary Practices, the Root Guru Yoga, the Personal Deity Yoga, Treasure Vase Breathing, Inner Fire, Light Drops, Non-leakage, Vajra Dharma, Highest Yoga Tantra, and Great Perfection. It is divided into multiple layers and levels. The Highest Yoga Tantra of Kalachakra is the integration of them all.

The Kalachakra practice is extremely important because Kalachakra, the great wheel of time, is capable of not only initiating everything, but also extinguishing everything. Time encompasses the transition of past, present and future. This transitioning of time is Kalachakra Buddha, which is to say, Kalachakra is a symbol for time. He symbolizes creation, existence, annihilation, and emptiness. He also symbolizes the giant wheel of time running over everything, completely eradicating afflictions and totally purifying karmic hindrances. As a result, one arrives at the pure land and even attains Buddhahood. In other words, the turning of the great wheel of time extinguishes afflictions and karmic hindrances, resulting in one reaching the realm of emptiness and attaining the ultimate fruition of Buddhahood. This is the essence of Kalachakra Buddha.

The Buddha has taught that phenomena do not arise on their own, by others, nor from both; phenomena arise out of karma. Kalachakra is the manifestation of this principle. Shakyamuni manifested Kalachakra. What the Buddha teaches is that everything about sentient beings will pass. Everything is impermanent, that is, no phenomena are ''permanent.'' Everything, without exception, will vanish.

The benefits of practicing Kalachakra are as follows :
1st: One who has received Kalachakra empowerment will be able to attain Buddhahood within seven lifetimes if one continues to properly cultivate the practice without breaking any precepts.
2nd: One who has received the empowerment will avoid all calamities if one continues to chant the mantra and perform cultivation.
3rd: One will not descend to the Three Lower Realms if one practices the dharma and chants the mantra.
One who has received the Kalachakra empowerment will attain Buddhahood within seven lifetimes. One who practices the dharma will be capable of ending wars, alleviating disasters, enhancing peace, harmonizing the climate, producing the bumper harvest of five crops, and blessing the country to be prosperous and the people to be secure. At one's passing away, one will ascend to the Kingdom of Shambhala, the pure land of the personal deity.

What does the pure land of Kalachakra look like? The Underground Perfect Penetration Country, once mentioned by Living Buddha Lian-sheng, is in fact the pure land of Shambhala. The pure land was described like this: This realm is not the same as the Pure Land of Ultimate Bliss or the celestial realm. It is even less similar to the human world. It is the one and only realm that has no afflictions. The beings there are not aware of death, and rarely experience birth. There is neither virtue nor evil. This realm will exist until the day that the earth and heavens are annihilated. In other words, it has the same lifespan as the earth and heavens. Here, I want to clarify one thing. That is: One will be naturally reborn in the the Underground Perfect Penetration Country as long as one constantly chants ''Namo da-zi-zai-di-di-huo-yan-fo (Great Unhindered Underground Flame Buddha),'' and aspires to be reborn in that country.

The attainments of the beings in this realm are also inconceivable. The height of beings there exceeds ten feet. Everyone has a halo above their crown, can fly, and is forever pure. All the beings reside there permanently. The ground is covered with lotus flowers. There are natural cottages of great beauty. The four seasons of spring, summer, fall, and winter don't exist. Illumination is constant, both day and night. There is no birth, aging, illness, death, or hunger. Everyone is a saint.

They can only travel to the human realm of the ten dharma realms to assist the cultivation of beings there. However, they leave no trace of their names, and no one knows they are from the Underground Perfect Penetration Country.

On Dec. 13, 2015, Living Buddha Lian-sheng transmitted the White Lotus King Personal Deity Practice and revealed the secret of the actual location of Shambhala. It turns out that, during the Western Xia Dynasty, the pure land of Shangri-La was located at Mt. Dangxiang in Great White Superior Country.

In the first generation of Shambhala, Manjusri emanated as King Durjaya. The second king of Shambhala was the White Lotus King, who wrote the Immaculate Light Treatise... The White Lotus King was none other than White Padmakumara, who is one and the same as Living Buddha Lian-sheng Sheng-yen Lu.

The Kalachakra Practice was a widespread Buddhadharma in the pure land of Shambala. It is said by some people that Kalachakra belongs to Hinduism and is a deity of Brahmanism, which is wrong. This is a mistake. Why? If you look at the legs and feet of Kalachakra, he is trampling Mahesvara and his consort, that is, Shiva and Shiva's wife. This is to symbolize that Kalachakra transcends all the deities of Hinduism and Brahminism. Moreover, Kalachakra practice was personally transmitted by Shakyamuni Buddha. The ''Kalachakra Tantra'' was thus a tantric practice personally transmitted by Shakyamuni Buddha. Shakyamuni Buddha also transmitted many other Vajrayana practices which were widely taught only in Shambala at that time. They were not widely taught outside of Shambhala, but were gradually disseminated later.The Kalachakra related practices transmitted over the years by Living Buddha Lian-sheng Sheng-yen Lu of True Buddha School are as follows:
Kalachakra 7 Practices, True Vajrakila Practice, Nine Stage Meditation Practice, True Meaning of Kalachakra Practice, Shield Protection Practice, Sun and Moon Disc Practice, Vajra Chain Practice, and the Precepts of Kalachakra.