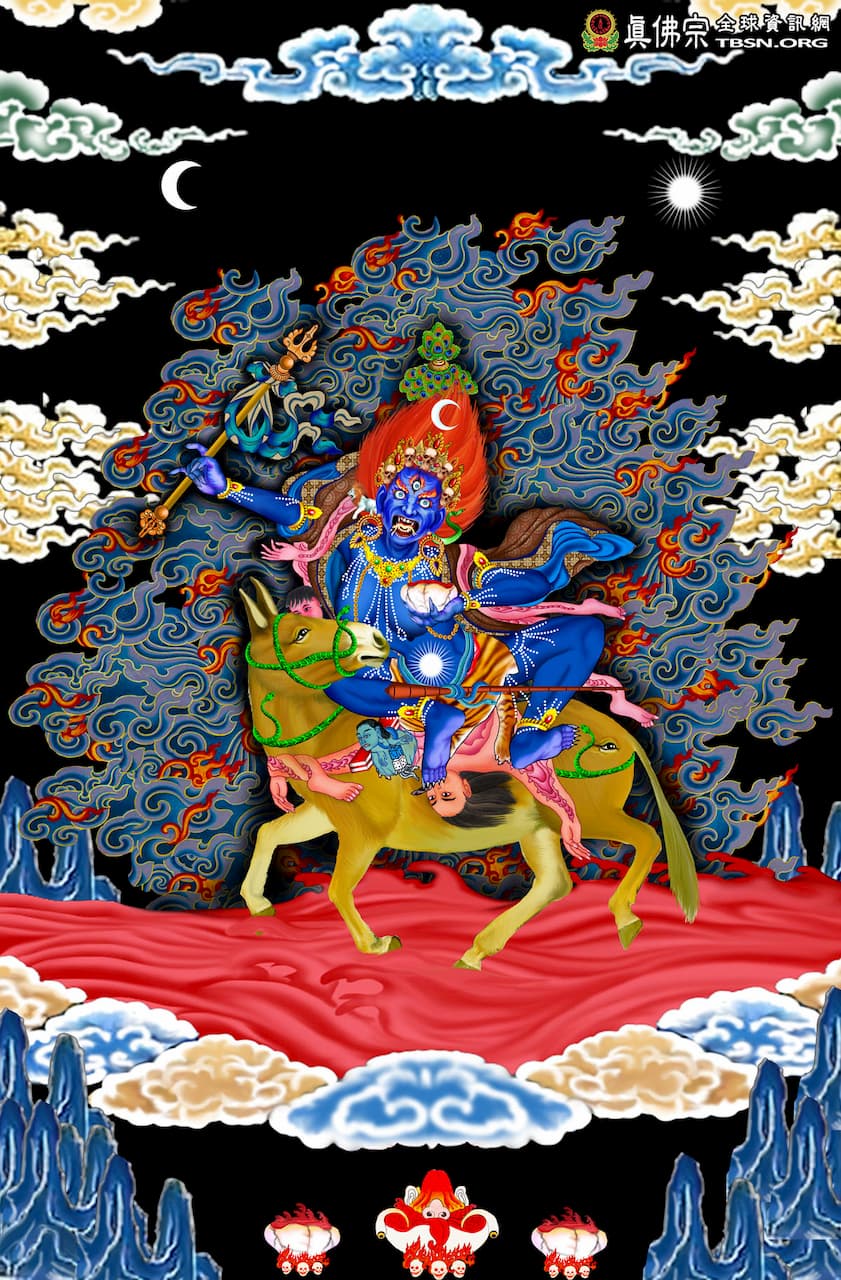 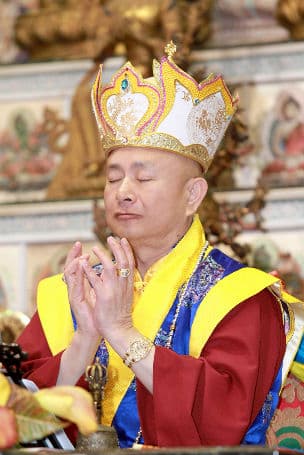 Place the palms together. Keep the index fingers, the middle fingers, and the ring fingers bent slightly inward and apart from each other while the thumbs and the little fingers are straightened and side by side with each other.

Mahasri's body is upright and reddish-white in color. She has two arms and wears jeweled bracelets and earrings, celestial garments, and a jeweled crown. Her left hand holds a wish-fulfilling pearl while her right hand forms the Wish-fulfilling Mudra. She is either sitting or standing atop a lotus platform.

【Living Buddha Lian-sheng Sheng-yen Lu Dharma talk - Mahasri Background and Key Cultivation Formula】
In Vajrayana Buddhism, there is a goddess who is most famous for her ability to divine the future. The goddess has status in the celestial realms. This extraordinary goddess is none other than "Mahasri." Mahasri is also called Lakshmi. Her father is Taksaka, her mother is Hariti, and she is the younger sister of Vaisravana.

Mahasri has "An upright reddish-white body, wears celestial garments, jeweled bracelets and earrings, and a jeweled crown. She holds a wish-fulfilling pearl in her left hand, forms the Fearless Mudra with the right hand, and stands upon a lotus platform."

This deity resides at the Akasagarbha court in the Garbhadhatu Mandala and attends the Thousand-Armed Thousand-Eyed Avalokitesvara Bodhisattva by her side. I have enshrined a statue of Mahasri at the Southern Mountain Retreat. Everyday I chant Mahasri's mantra, "Om, ma-ha-shi-li-ye, so-ha."

Mahasri is a goddess who achieved attainment long ago. She followed Luminance Tathagata and learned Buddhadharma from him. Having earned great merits, Mahasri is therefore also called Lakshmi.

According to the Sutra of Golden Light, Chapter of Lakshmi, during the era of Luminance Tathagata of Merit Ocean of Precious Flowers Glazed Golden Mountain, Mahasri planted virtuous roots. Therefore, by her mind, through her view, or with her presence, she is able to satisfy all beings with all manner of joy and happiness. If a devotee recites the Golden Light Sutra, makes offerings to buddhas, makes offerings of fragrant flowers, perfumes, and delicious food to Mahasri, and recites her names, the devotee will certainly obtain fortune rewards such as wealth, treasure, and so forth.

As for the background of Mahasri, she is considered the daughter of Hariti and the Dragon King Takshaka, who is one of the Eight Great Dragon Kings. Her older brother is Vaisravana. Questions between the Buddha and Mahasri were recorded in a sutra. Buddha questioned Mahasri "Where do you live?" Mahasri replied "I live in the Auspicious Palace in the northerly regions of Mt. Sumeru. The Auspicious Palace is one of the palaces of Vaisravana." According to the sutra, this was the answer she gave to Shakyamuni Buddha. She lives in one of the palaces of her older brother.

Mahasri vowed that "As my mind goes, I shall bestow on sentient beings who honor the Buddha and think of me constantly in all manner of joy and happiness. They will not be concerned about insufficient clothing, provender, daily necessities, gold, silver, jewels, pearls, lazurites, corals, ambers, jaspers, etc."

In Japan, Mahasri is depicted as kindly with a smile on her face. She wears a phoenix crown and holds an auspicious fruit. The Japanese Mahasri is gentle and elegant. In Eastern Vajrayana, Mahasri's primary function is to bestow wealth on sentient beings. In Tibet, however, Mahasri is different. The Tibetan Mahasri has eyes in front and back. Even the horse she rides has eyes on its rear end so Mahasri can see forward and backward, to the left and the right. She also has the power to eradicate evil.

Mahasri of Vajrayana can fight wars and eradicate calamities. She can also remove misfortunes and battle with enemies. She is fierce and awesome. In addition, Mahasri can eliminate misunderstandings and karmic forces as well as eradicate all enemies.

Tibetan Mahasri's appearance is wrathful and fierce. The Japanese Mahasri is moderate and refined. According to one's favorite image, one may visualize Mahasri either way. Mahasri of Eastern Vajrayana is different from Mahasri of Tibetan Vajrayana, and their respective cultivation practices are also not very similar.

Mahasri has vast power and is very, very honorable. Her power is truly mighty. Mahasri's mudra is the Lotus Mudra. It's the fully bloomed Lotus Mudra but the two ring fingers are bent inwardly a little. This is Mahasri's mudra.

Mahasri's seed syllable is "shili" which means "auspicious." Mahasri's mantra is "Om, ma-ha, shi-li-ye, so-ha." The syllables "ma-ha" mean "great" whereas "shi-li" means "auspicious." Together, it means that Mahasri is the Great Auspicious Goddess of the Great Auspicious Heaven, of the universe, and of the entirety of space. The meaning of "so-ha" is that Mahasri is able to bring the affairs of all beings to complete perfection. Vishnu (Brahma of Universal Purity) is the god of protection and Mahasri is his wife.

There is a mantra: "The Shangqing Shangdi, the Donghua Dilijun, Bestow on Lian-sheng the Divine Book of Liujia, Authority to command the deities of Liujia Liuding, freedom to travel to the celestial realms of Twelve Xinu and the Five Goddesses of Nayan Heaven, Chief of the Three Divine Generals of Fire, Ocean, and Wind, Each Divine General leads a million divine soldiers, Assist in Lian-sheng's power, supernatural ability, transformations, and merging with the Tao."

It is not difficult to receive bestowal of fortune from Mahasri. This is because Mahasri is in the north, at the side of Vaisravana, and not far from the human realm. It is therefore easy to attain spiritual union with Mahasri. Another of Mahasri's unique characteristics is that she loves cleanliness. Her altar must be spotlessly clean. The statue, the image, and the implements cannot be dirty. Even the cloth on which her image is painted must be woven by a virgin. Mahasri then will descend.

Mahasri is more suitable for cultivation by females. Because Mahasri manifests in the female form, males are less suitable for this practice. Her appearance is incomparable and her mind is utterly pure. In cultivating her dharma, males may easily commit violations. I am specially explaining this because practitioners should cultivate a practice based on their own inherent capacity. Mahasri Practice is more suitable for females to cultivate.

The countenance of one who practices this dharma will surpass millions'. This is a helpful and profitable practice which brings not only wealth but also physical beauty and freedom from disasters during one's lifetime. Is this not a great and beneficial dharma?

I have written about Mahasri in Book 54 Vajrayana Karma Practices, Book 102 Nectar of Dharma, Book 108 Great Legends of Rainbow Villa, Book 114 Spiritual Practices of Vajrayana, Book 204 The Divine Book, and so forth. Mahasri has a Prayer for Dream Revelation Practice. If one prays to Mahasri she will provide guidance through one's dreams. Mahasri also has a practice to foretell good or bad fortune. It is called "zhanbu" and is a method of sortilege. In Tibetan this practice is called "daqua." It is a dharma of Mahasri.