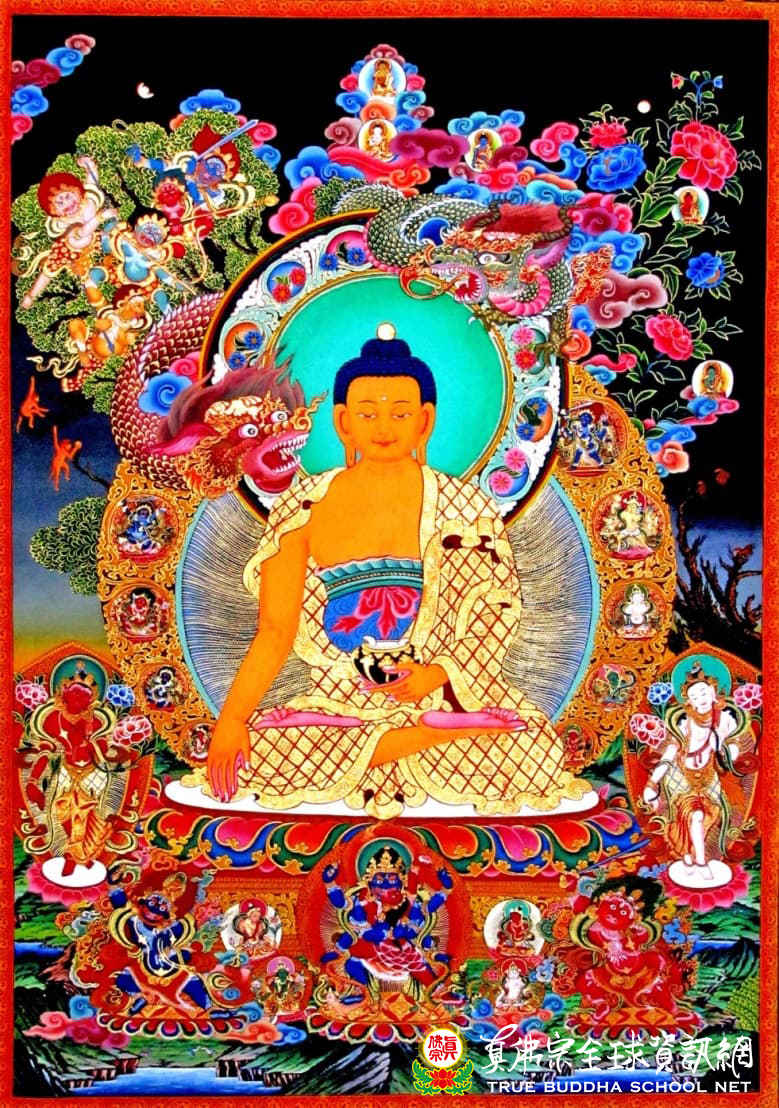 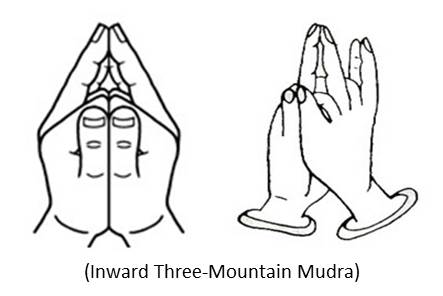 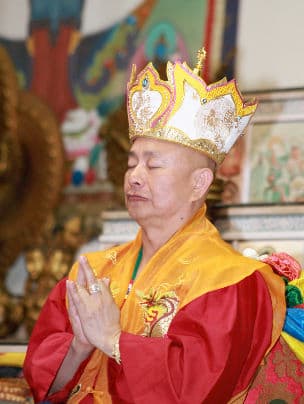 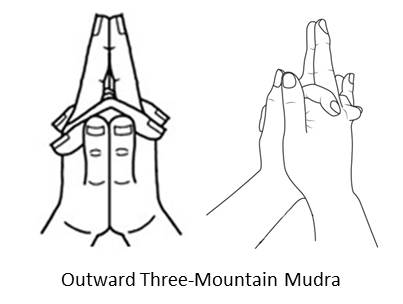 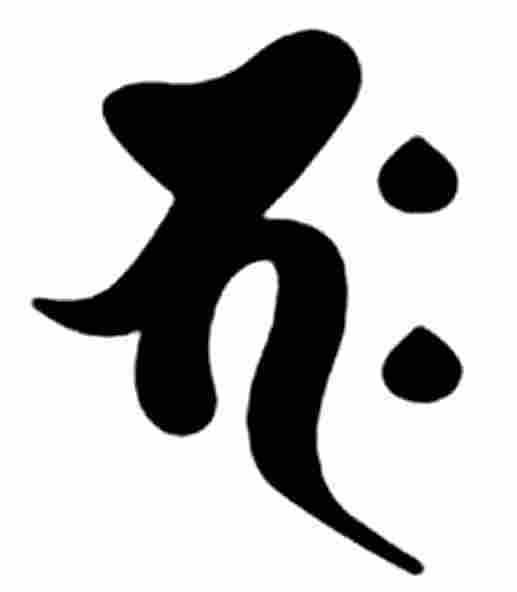 Shakyamuni is gold in color. His right hand touches the ground while his left hand forms the meditation mudra upon which there is a bowl filled with nectar. He wears a monk's triple robe [tricivara in Sanskrit]. His appearance is perfect, majestic, and brilliant. His body is translucent and he is meditating in the peaceful illumination of a white lotus seat.

Namo Fundamental Teacher Shakyamuni Buddha is honored in both Sutrayana and Vajrayana.

According to the two Vajrayana mandalas, Buddha Shakyamuni is the chief deity in the Womb mandala. In the Diamond mandala, Shakyamuni occupies the same position as Amoghasiddhi. The Vairocana Sutra states: "Shakyamuni's entire body has a truly golden hue and manifests in full glory the 32 marks of Buddhahood. Manifesting in his emanation body and robed in a yellow cassock, he sits atop a white lotus and expounds the Buddhadharma."

Buddha Shakyamuni, known as Siddhartha Gautama before he was ordained, was born on the eighth day of the fourth month under an ashoka tree in the Lumbini Grove of Jambudvipa in Kapilavastu. He was of the Shakya clan where his father was King Shuddhodana and his mother was Queen Mayadevi. He was ordained at the age of 29. Shakyamuni attained enlightenment at the age of 35 and spent the next 45 years teaching Buddhadharma. He delivered more than 300 dharma discourses and saved countless humans and devas. In the year 543 BC at the age of 80, Shakyamuni entered nirvana under the twin sal trees by the river Vati.

Shakyamuni Buddha's first disciples were the five ascetics headed by Ajnata-Kaundinya and the three Kasyapa brothers. Shakyamuni later went on to teach many other disciples, including some who were kings. He frequently traveled throughout the ancient kingdoms of Magadha, Kosala, and Vaishali teaching Buddhadharma.

Shakyamuni's mantra is "Om。mou-ni。mou-ni。 ma-ha-mou-ni。shi-jia-mou-ni。so-ha。" which means "Able to be kind, able to give the most immense kindness, the saint."

Shakyamuni's teachings were truly marvelous. When Shakyamuni turned the dharmachakra for the first time at Deer Park, he discoursed the doctrine of Suffering, Accumulation, Extinction, and Path. In Hinayana, this doctrine is referred to as the Four Noble Truths.

The meaning of the Four Noble Truths is that life in this world is characterized by afflictions and suffering. There is happiness but not much. Ultimately, everything in this world will completely disappear and be extinguished. If one becomes enlightened to the meaning of extinction prior to disappearing from this earth, one will, at that moment, be enlightened to the principle of the Buddha.

Therefore, there is no true happiness in this world. Happiness in this world is fleeting and momentary. For the most part, whatever happiness one enjoys is overshadowed by suffering.If one draws together all one's suffering and realizes that ultimately neither suffering nor happiness truly exist, that realization in itself is extinction and one attains the Path at that moment. When Shakyamuni first turned the dharmachakra, this was the essence of his discourse to Hinayana practitioners on Suffering, Accumulation, Extinction, and Path.

To become a bodhisattva, one must save sentient beings by performing the Six Paramitas; giving, discipline, patience, meditation, perseverance, and wisdom. This is the Bodhisattva Vehicle discoursed by Shakyamuni. The Bodhisattva Vehicle emphasizes the generation of bodhicitta. The bodhicitta one generates has so-called "equality" which means seeing the equality of all sentient beings. Grandmaster is equal to everyone and everyone is equal to Grandmaster because every person equally has the Buddha-nature.

"Benefiting others" means not thinking of oneself, but being thoughtful toward sentient beings. Taking other people into consideration is benefiting others.

What is meant by exchange of self with others? This means, as Confucius said, "Do unto others as you would have them do unto you." Would you enjoy being defamed and insulted by another person? If not, then don't insult and defame other people. One who violates this principle is not practicing Buddhadharma.

If one wouldn't want something done to oneself, one shouldn't do it to someone else. Don't place burdens on others which increase their suffering.

As I have said before, one must be grateful for the kindness of others. One must appreciate the kindness of one's parents. How did you grow up? Without your parents could you have grown up? No, you couldn't have. One's parents are not limited only to the parents who gave birth to you and raised you. Even if those who raised you are not your biological parents, they are still the same as your parents. Therefore, one must recognize and be grateful for this kindness! Ultimately, one must repay this kindness. This is the principle taught by the Buddha.

During this period, Shakyamuni also taught the path of Pratyekabuddha, that is, one who attains enlightenment by means of the twelve links of interdependent origination.

The true greatness of the Buddha was his three turnings of the dharmachakra. His last turning was the Esoteric Vehicle. The Esoteric Vehicle is Shakyamuni's teaching on how to see one's Buddha-nature, attain enlightenment, and transform into a buddha. The aforementioned vehicles were all discoursed by Shakyamuni and this is his magnificence.

People should stop their constant fighting amongst themselves. All this worldly bickering can be described in two words: "fighting" and "competition." If one has a mind of equality, if one is determined to be of benefit to others and performs the exchange of self with others, then one may cross over and transform into a buddha when at last one understands that there is nothing to be gained in this world. This is the teaching of Shakyamuni.

When today's monks and nuns let go of their ordinary household life, they enter the family of the Dharma King. At the same time, they give up their family name and adopt the surname of Shakya. The origin of this custom may be traced to Reverend Taoan of the Chin Dynasty who advocated such a changeover. It is also explained in the Agamas that "When rivers from the four directions flow into the ocean, they lose their names. When people of various family names take the vow of renunciation they are addressed as the "clan of Shakya." This is the reason why ordained disciples of Shakyamuni Buddha change their surname to Shakya.

Many monks and students of Buddhism are aware of the numerous methods for purifying karmic hindrances, but they do not know that the mantra of Buddha Shakyamuni holds a great secret, that is, it is able to remove severe karma. Most students know that teachings given by the Buddha when he was alive have been collected and formulated into the Hinayana and Mahayana scriptures and are a cultural treasure of Eastern civilization, but they do not know this great esoteric secret.

From the book Karma Yoga written in Pali, I learned that Buddha Shakyamuni was a Bhagavan Samyak-sambodhi Merit King, a founder of religion in samsara, and that within the Esoteric School, he is regarded as the principal deity for repentance and purification.

Practitioners of the Shakyamuni Merit King Practice will rapidly develop the power to read their past lives, which will appear before their eyes as if on a movie screen. By doing this practice, they will instantly know the karmic causes and results of previous lifetimes and be able to know their former lifetimes with utmost clarity.

The key to the Shakyamuni Merit King Practice is visualizing the white light of the nectar. When one performs this practice, one receives empowerment from Shakyamuni. The Buddha's supreme wisdom enters through one's crown into one's body, bringing all virtues to great perfection. Such a practice is, of course, the greatest method for purifying karmic hindrances.

Shakyamuni Buddha Sadhana
Nov, 13, 2010 Dharma Talk - Shakyamuni, Able to Give the Most Immense Kindness
Buddha Shakyamuni is the Principal Deity for Purification