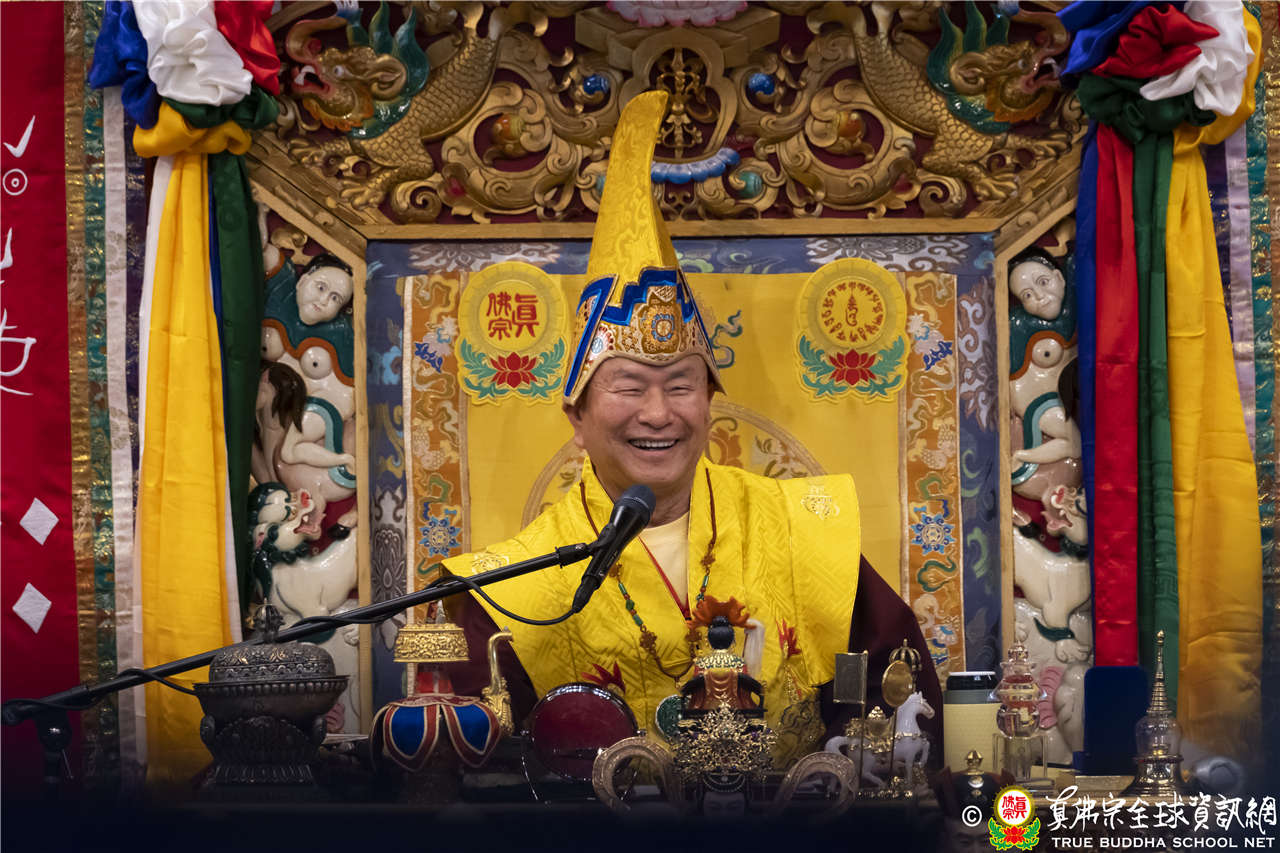 Let me ask you, is there any merit in being ordained? Lian Long [the newly ordained nun] said that there is no merit in ordination, but the Buddha has spoken on the merit of being ordained. Why is this?

In the Vimalakirti Sutra, it was mentioned when Sakyamuni Buddha’s son explained The Sutra on the Merit of Ordination as Spoken by the Buddha to two people who aspired to become monks, Vimalakirti appeared and told him, “What you said was wrong. True ordination is not for the sake of merit nor benefits.”

Being ordained without thinking of merit or benefits is true ordination. Vimalakirti seems to be stating a contradictory viewpoint to what the Buddha says. But the fact is, The Sutra on the Merit of Ordination as Spoken by the Buddha is merely a skillful means to entice sentient beings to become ordained. In reality, true ordination has neither merit nor benefits!

The Vimalakirti Sutra talks about the enlightening reality. It is very important: There never is any merit or benefits in the saha world. The true reality states that there is no merit and no benefits.

However, the Buddha spoke on The Sutra on the Merit of Ordination as a skillful means to attract people to become ordained. So, according to the teaching of Vimalakirti, the four of you who are getting ordained today should not think of the merit or the benefits of ordination. Instead, you should do what is expected of an ordained person. And what are they?

It is the same as what the great bodhisattvas should do, which is to give, to abide by the precepts—in this case, ordination precepts for the ordained, to be diligent, to endure, to obtain the wisdom of the tathagata, and to train in concentration and single-mindedness in meditation. Performing dharma work is giving or practicing generosity. Do not isolate yourself in your cultivation; instead, create affinity with sentient beings. That is the intent of Sakyamuni Buddha’s teaching.

[Grandmaster’s dharma teaching during the bestowal of the lay bodhisattva vow.]

In front of the precept altar, there should never be any false statements. I want to ask the first precept-holder listed here, Lianhua Zhiyi, what is the lay bodhisattva vow? [Lianhua Zhiyi replied,] “Your disciple would like to say that I vow to be a bodhisattva with the unconditioned mind while walking the conditioned bodhisattva path to deliver sentient beings.” So, what do you use to walk the bodhisattva path? “With the mind of no self.” Where do you obtain the mind of no-self? “From no-mind.” So, you have no mind? “I have a mind.” Okay, so having a mind, what do you practice? “Compassion, endurance, diligence, meditation and the myriad actions of the six perfections.” His answers were quite good! “Thank you, Grandmaster!”

If someone holds a view that the saha world is nonexistent and everything is empty, you teach them existence. Conversely, you use the wisdom of emptiness to transform and deliver someone who believes everything is real and existence is permanent. You need to be able to utilize both emptiness and existence. In this way, you embody the all-embracing wisdom of the tathagata.

In your training to be a bodhisattva, you should be an exemplary bodhisattva while delivering sentient beings. A great bodhisattva does not focus on anything personal, and they do not attend to their own virtues in solitude.

Now, I would like to use this mirror to reflect light upon you to completely purify you, so your self-nature is purified, and all self-natures are purified.

For those still very attached to the saha world and refused to be delivered, I said, “If you want to stay in samsara, you must be like Vimalakirti, who can transform samsara into a pure buddhaverse.” To do so, you need to reach the purity of the mind. You must practice until your mind has been completely purified to stay in samsara. Otherwise, it is impossible to stay in samsara because you will be bound by endless transmigration in the six rebirth realms.

Only when you are pure—your self-nature is pure, and all self-natures are pure—can you stay in samsara like Vimalakirti by transforming samsara into a pureland. You can then transform residences into palaces, family members and loved ones into buddhas and bodhisattvas, words into mantras, and all movements into mudras.

If you have such an ability—with pure self-nature—all your speech become mantras, all your movements become mudras, all your residences are palaces, and all your actions are acts of giving.

You stay unaffected, unperturbed, and immovable in whatever you do. You stay in samsara but don’t grasp or cling to it. Only bodhisattvas with pure self-nature can stay in samsara because they transform residences into palaces, their retinue into buddhas and bodhisattvas, and they transform into the yidam; they have become a buddha—the self-nature yidam.

That is the only way to remain in samsara. It is fine if you don’t want to go to the pureland. However, you must be like the great master Vimalakirti or other similar great bodhisattvas—embodying pure self-nature to do everything in samsara.

Vimalakirti has no desires for the world. He maintains a pure mind wherever he goes and in whatever he does. So, he went drinking and had beautiful wives. This is also his way of delivering and liberating sentient beings. Yet he had no attachments to this world.

[Grandmaster’s dharma teaching after Golden Mother Homa. There was no reading of the sutra.]

According to the Vimalakirti Sutra, 32,000 bodhisattvas attended Sakyamuni Buddha’s dharma assembly. However, the Buddha talked about only fifty of them. Otherwise, naming all 32,000 bodhisattvas would fill the whole sutra as thick as this. [gesturing]

The first bodhisattva listed was the Bodhisattva with the View of Equality, who views all sentient beings in the world as equal. Beautiful or ugly, good or bad, they are all equal in the mind of this bodhisattva. Whether one is a human or a worm, there is no difference. In fact, a human being comes from the union of a long worm (sperm) with a round worm (egg), so you are essentially a worm, too!

For this bodhisattva, it is equality among all, including those flying in the sky, crawling on the ground, or swimming in water. Like him, you should not undermine any living being—birds, ants, worms, insects, fish, all lives should be valued and treated equally. This is how great the Bodhisattva with the View of Equality is.

Likewise, I cherish both True Buddha School disciples and non-disciples. I equally cherish them, and I cherish all lives—not forsaking any single being.

The second bodhisattva was the Bodhisattva with the View of Inequality. This bodhisattva cultivated the wisdom of discernment. He knew the different spiritual capacities—superior, middling, and inferior. He was well-versed in both the worldly and beyond-worldly dharmas; had mastered the development and perfection stages; and comprehended the mundane truth and the noble/ultimate truth.

He embodies the wisdom of discernment, so he was able to discern different spiritual capacities, utilize the appropriate methods, and teach and deliver sentient beings accordingly. A bodhisattva who delivers sentient beings in this way is called the Bodhisattva with a View of Inequality.

He understands both equality and inequality, the worldly and beyond-worldly dharmas, as well as the mundane truth and the noble truth. The noble truth is all about spiritual cultivation of the beyond-worldly path. The mundane truth, on the other hand, relates to the worldly practices of a lay practitioner, such as earning money, building a career, establishing a status, having wives, and how to handle them.

Vimalakirti knows how to cope with various circumstances and is capable of everything. He can teach dharma to everyone, from the noble high officials in the palaces to the lowest commoners. Thus, Vimalakirti is a Great Bodhisattva with a View of Both Equality and Inequality.

Vimalakirti states that lust, anger, and ignorance are all buddhadharma. Back then, Vimalakirti could visit the brothels unscathed, which is like the expression “Passing through a shower of flowers without any petal attaching.” Vimalakirti had a wife, the Goddess Who Scatters Flowers, and many mistresses. And he says that sex is also buddhadharma. Why? Because when it is performed with a pure heart and mind, sex itself is also pure. However, let me remind you, if you still harbor even the slightest desire and grasping, that is the basis for transmigration in the six rebirth realms. It is the source of rebirth in the three lower realms.

Why does Vimalakirti refer to anger as buddhadharma? Losing temper indicates that one has lost control and cannot endure; qi has moved and fire has risen. Yet, if you ignite your fire of anger for the sake of teaching sentient beings, then this fire is pure. It is a cool fire, and such fire will not be harmful. Although temper has been lost, this fire of anger comes out of compassion. It is called compassionate wrath. Thus, wrath is also dharma.

If you embody all kinds of wisdoms of view of equality and view of inequality, then you will not be ignorant. You have understood what greed, anger, and delusion are all about. Being deluded means you are ignorant. So, lust, greed, and ignorance are all buddhadharma.

The Golden Mother told me earlier that Grandmaster should learn the spirit of Vimalakirti. For Vimalakirti, there is not one thing that is not buddhadharma.

Vimalakirti is always pure and unhindered. Golden Mother told me that Grandmaster must talk about these three bodhisattvas and Vimalakirti today. Only Grandmaster Lu is qualified to expound on the Vimalakirti Sutra with such in-depth and clear explanations, unlike most people who would only give superficial explanations.