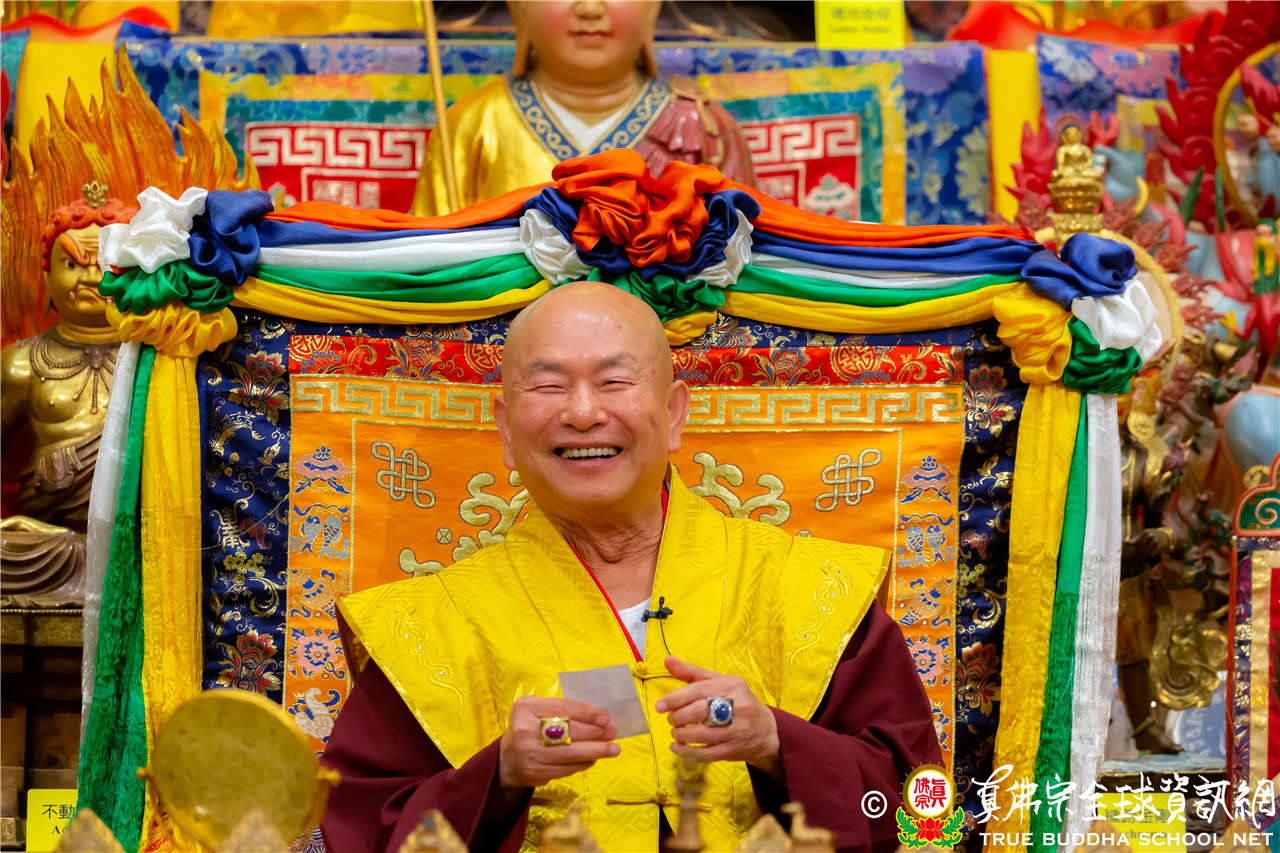 They appeared most magnificent, even when they had forgone all worldly embellishments. Their fame and reputation far exceeded the height of Mount Meru, and their deep faith was as strong as a vajra.

We will now continue the Vimalakirti Sutra: their deep faith was as strong as a vajra. This phrase is even easier to explain. The great bodhisattvas have very strong—deep and profound—faith just like the vajra; it is indestructible.

This is called a vajra scepter [shows a vajra scepter]. It was an extremely strong and indestructible weapon in ancient India. It is so strong it can destroy anything and will not deteriorate for a long period of time. It remains intact forever in the right condition, unlike human bodies. I remember a rhyme that recounts a human life from birth to schooling, working, and to the point of deterioration to death.

At 1, one makes an appearance.

At 50, one gains vigor despite aging.

At 60, blood pressure starts to rise.

At 80, one trembles and wobbles.

At 90, everything is forgotten.

Humans generally expire after 100 years, but a vajra will not break, even after 100, 200, or even 1000 years. Made of sturdy metal, it will not deteriorate. Thus, the vajra is an analogy for a strong faith. A faith that is strong as a vajra cannot be destroyed.

…their deep faith was as strong as a vajra.

A typical explanation will end here, but Grandmaster has more to explain. The key to this phrase is in the words deep faith. Since a typical believer easily loses faith, what makes it possible for the bodhisattvas to maintain deep and strong faith?

In my merit dedication, Grandmaster often prays, “May we be healthy, all wishes be fulfilled, all circumstances become auspicious, and may we maintain a strong faith and commitment in our spiritual cultivation.”

Some easily lose faith when they encounter adversities or when their wishes are not fulfilled. They bring offerings and red envelopes to the temple and pray for their wishes to come true, but when their prayers are not answered, they lose faith in the bodhisattvas. Perhaps their wishes have been fulfilled 99 times, but the one time it is not fulfilled, they lose their faith. They abandon their journey toward enlightenment and stop cultivating. Unfortunately, many people are like this.

Generally speaking, humans don’t have strong faith. Yet, the great bodhisattvas have a strong, deep faith—as strong as an indestructible vajra. How come? There are two reasons. The first is their comprehension of the Ultimate Truth—the True Reality or True Suchness.

They have the true wisdom of both the worldly and beyond-worldly paths. Beyond-worldly wisdom refers to the wisdom of true emptiness—the intrinsic empty nature of everything. Thus they have nothing to ask for.

Those without these wisdoms are just ordinary followers. Some people seem very devout, but when a relative gets into a car accident, they’ll suddenly lose their faith and say, “I had such strong faith, so why did such a calamity strike us?” That is not faith, let alone deep faith.

Deep faith refers to faith and a vast profound understanding. People with deep faith can explain all phenomena. For instance, he got into an accident because he ran a red light, drove too fast, or because he was dazed. If it’s not your fault, then such a car accident is the fault of others.

There is always cause and effect. You cannot lose faith because you get cancer after doing good all your life. That cancer is the maturation of karma from your previous lives. Did you know that karmic creditors or enemies manifest as abnormal cells or growths in your body to take your life? If you understand karma—the law of cause and effect—you will understand the things that happen to you. You don’t get sick because of your faith; you don’t get cancer because you are devout. But many people lose faith when they see someone who has been good, chanted all their life, performed charity, but in the end, died from cancer.

On the contrary, the great bodhisattvas know about cause and effect and all causes and conditions. They embody the wisdom of discernment and the wisdom of true emptiness. They have nothing to ask for, yet they have all kinds of dharma treasures. The key is that the great bodhisattvas have a vast and profound understanding and the ability to explain and resolve everything, in addition to their deep faith.

The second reason is by having complete faith in the Guru, Buddha, Dharma, and Sangha.

Before one embodies or even experiences the wisdom of emptiness or the wisdom of discernment, or before one becomes a bodhisattva, one can generate deep faith by believing in the guru, buddhas, dharma, and sangha. They take refuge and simply believe in their guru. They believe in Sakyamuni Buddha and in the Ultimate Truth spoken by the Buddha. They also believe what Vimalakirti says.

Because of the sutras, they believe in the buddha, dharma, and the sages of the sangha. They naturally develop faith by taking refuge in the sages and listening to their teachings about the truths. They may not have personal experiences, but their strong belief in the sages can also generate deep faith.

Both kinds of deep faith are as strong as a vajra. Whether you have embodied the wisdom of true emptiness and the wisdom of discernment—and some of you here have—which means you are essentially a great bodhisattva, or you have pure faith in the words of Sakyamuni Buddha, Vimalakirti, or the sages of the sangha, you have deep faith as strong as a vajra. You will never waver from your spiritual cultivation.

Can you see how unique Grandmaster’s dharma exposition is?

Faith alone can generate power. Faith has power! By having faith, one enters the Buddhist path. Upon gaining a true understanding of the path, one then develops a vast profound understanding in addition to having faith. This is how the great bodhisattvas are, and at such time, their faith is as strong as a vajra. Otherwise, one can also generate deep faith by believing in the words of the Buddha, Vimalakirti, or the sages of the sangha.

Generally speaking, most people don’t have enough faith. Their faith crumbles in the face of adversity. In Grandmaster’s spiritual consultation, I sometimes encounter people who are very attached to their romantic feelings and infatuated with their lovers. They just can’t realize or accept that conditions have changed—the lover loves someone else and thus, has left. They become depressed, yet they are still obsessed and can’t let go. They continue hoping, wishing, and waiting indefinitely.

They asked Grandmaster about their past lover. I knew clearly that there was no hope, but I did not tell them forthrightly. I felt great compassion toward them, so I tried to give them some hope. I told them to pray to the deities and burn some spirit money; perhaps they would receive guidance in their dreams. I comforted them by saying, “Perhaps she will remember your good traits and come back to you.” “Burn more spirit money; perhaps it will help. See if he will call or write you. See how things go.” Grandmaster does not like to relay a hopeless situation. As nothing is cast in stone, I give them time and hope that they come to their senses. Instead, they gave up their faith in Grandmaster and abandoned spiritual cultivation. They never showed up again at the Seattle temple.

Everything is ever-changing! Human affairs, like love, money, lifespan, diplomatic relationships between countries, as well as friendships and relationships, are full of impermanence. Good friends become not-so-good friends, then they go back to good terms and then worsen again, back and forth. Nothing is definitive.

Only one true reality exists: no-self, impermanence, suffering, and emptiness. Upon understanding this, you will believe in Sakyamuni Buddha, Vimalakirti, and the sages of the sangha. Their deep faith is as strong as a vajra.

[1] Buddhaverse or buddha universe, is a novel and very appropriate term coined by Dr. Robert Thurman for 佛國, which has normally been translated as buddhaland, buddha-field, buddha realm, or buddha world from the Sanskrit word “buddhaksetra