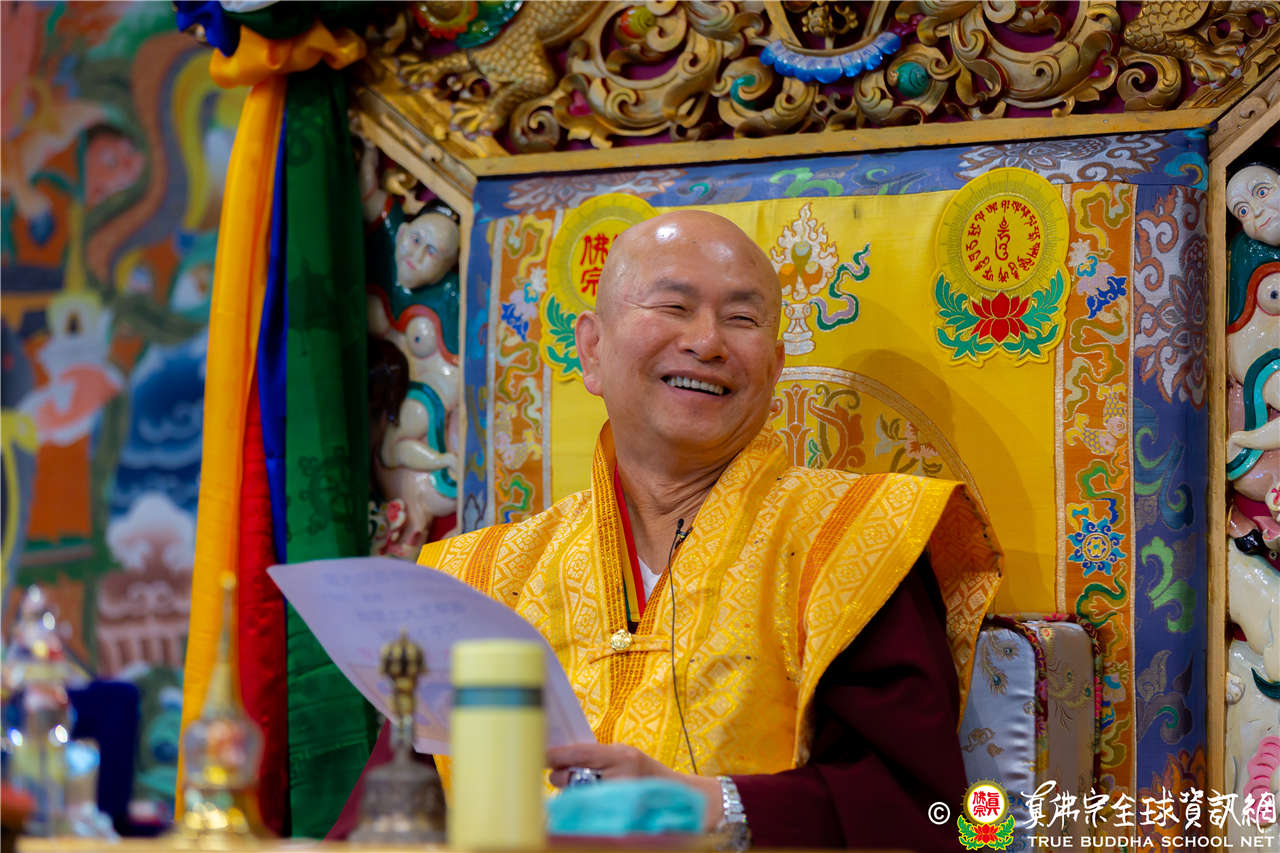 They appeared most magnificent, even when they had forgone all worldly embellishments. Their fame and reputation far exceeded the height of Mount Meru, and their deep faith was as strong as a vajra. Their dharma treasure showered nectar everywhere upon all beings as the most marvelous sound ever heard. They understood the profundity of the origination of causes and conditions, [1] and cut off all wrong views.

Let’s talk about the Vimalakirti Sutra: Their fame and reputation far exceeded the height of Mount Meru. This one is easy. There seems to be nothing to explain as you easily understand that the fame of the great bodhisattvas is even greater than Mount Meru.

The fame of the great bodhisattvas far surpasses the highest Mount Meru in the universe. Does anyone have anything to add? No? In that case, let me explain further.

Being born in Taiwan, [let me talk about Taiwan], according to what I know, Buddhism in Taiwan had two origins: through China and Japan. First, Buddhism was brought by immigrants from the Chinese mainland to Taiwan, so we can say that Taiwanese Buddhism is essentially Chinese Buddhism. It comprises authentic Buddhism and local traditions. Authentic Buddhism focuses on spiritual cultivation, while folk belief includes worship of all sorts of deities, including buddhas, bodhisattvas, Taoist gods, sages, immortals, and other local deities.

[Many] Taiwanese were originally from places in the Chinese mainland, such as Minnan (Fujian Province) and other provinces close to Taiwan, who had arrived since the Ming and Qing Dynasties. Buddhism was brought along with these immigrants. A lesser influence came from Japan, which ruled Taiwan for 50 years. A little bit of Japanese Buddhism also came to Taiwan.

Among them were some renowned monks who built famous temples. The first temple in Taiwan was called the Mituo (Amitabha) Temple. Do you know where it is? We are not sure which Mituo Temple was the first temple, but there is a Mituo Temple in Chiayi, then known as Tsu-Luo, the earliest ancient city. There is also a Mituo District in Kaohsiung.

The other famous temples back then were the Zhuxi [Bamboo Stream] Temple in Tainan, another ancient city; Lungshan [Dragon Mountain] Temple in Wanhua, Taipei; Chishanyan [Red Mountain Cliff] Temple, also known as Chi Shan Yan Long Hu [Red Mountain Cliff Temple at Dragon Lake] Temple in Liujia, Tainan; and Qingshui Yan [Clear Water Cliff] Temple. Of these ancient temples, I have visited the Mituo Temple, Lungshan Temple, and Chishanyan Temple. So you see that Buddhism has existed in Taiwan for a long time since the Ming and Qing dynasties. Additionally, there are also the Kaiyuan Temple in Tainan, the Kaihua Temple, and the Xinglong Temple.

Later, many monks came along with the army from the Chinese mainland to Taiwan, spreading authentic Buddhism. They brought Zen Buddhism, primarily from the Linji School, the Caodong School, and the Huangbo (Hongzhou) School of the patriarch, Huangbo Xiyun.

I will now talk about famous Taiwanese monks since we have been talking about fame that exceeds Mount Meru. The first was the Venerable Nan Ting in Taipei. The second monk is still famous to this day, the Venerable Hsing Yun from Yilan, who later moved to Kaohsiung and founded Fo Guang Shan in the Dashu district. He spread buddhadharma all over the world, and his fame and reputation far exceed the height of Mount Meru, even today. There is also the Venerable Kwang Tzu in Penghu and the Venerable Hui Feng in Tainan.

The earliest venerables who first spread buddhadharma in Taiwan were: Nan Ting in Taipei, Hsing Yun in Kaohsiung, Kwang Tzu in Penghu, and Hui Feng in Tainan.

What about the lay Buddhists who also propagated buddhadharma in Taiwan? There were a few famous and reputable ones. The first was Tang Xiangqing. Have you heard of him? No one has heard of him?! He was a famous lay Buddhist. The second was Li Bingnan, a great lay Buddhist master I followed. It was Li Bingnan who recommended I take refuge in Master Yin Shun. My mother, Lu Yu Nu, the surveyor Huang Chun Feng, a good friend and subordinate of mine, and I took refuge in Master Yin Shun at the Buddhist Lotus Society in Taichung. Li Bingnan’s sutra expositions and dharma teachings were extremely famous in Central Taiwan.

Nowadays, we have the four major Buddhist sects in Taiwan, which all of you know. They are renowned around the world, and their fame and reputation far exceed the height of Mount Meru. They are Tzu Chi, Fo Guang Shan, Dharma Drum Mountain, and Chung Tai Shan, and their four great masters: Cheng Yen, Hsing Yun, Sheng Yen, and Wei Chueh.

Everyone knows the Tzu Chi Foundation and Master Cheng Yen, right? If you have never heard of Tzu Chi, you must not be a Buddhist! And you must also know Master Hsing Yun of Fo Guang Shan and the Master Sheng Yen of Dharma Drum Mountain. These three masters have authored many writings. Lastly is Master Wei Chueh at the Chung Tai Shan. Many monks have fame and reputation far exceeding the height of Mount Meru.

I hope I am not the only one who knows them—you should too. You should have done some research and understood how Taiwanese Buddhism came about. Which ones are the ancient temples? Who were the great bhikkus, bhikkunis, upasakas, and upasikas that established it? Have any of you visited any of the ancient temples? Those famous temples I mentioned have existed since the Ming and Qing Dynasties. So if you travel to Taiwan, you can visit them. These ancient temples have their own characteristics, and of course, the newer temples are more modern. You need to know these things! I cannot be the only one who teaches while you just listen and know nothing.

The four Taiwanese Buddhist sects have fame that far exceeds the height of Mount Meru. So Vimalakirti asked me, “What is the greatest thing about these sects?” For Tzu Chi, it is money. They have the most money—naturally since they perform charity and need money to do so. As for Fo Guang Shan, they have the most beautiful and largest temples all over the world. The greatest thing about the Dharma Drum Mountain is Buddhist knowledge. And Chung Tai Shan has the most antiques since Master Wei Chueh likes antiques. The four famous Buddhist sects have fame and reputation that far exceed the height of Mount Meru.

Not the most money, the biggest or most numerous of temples, the most antiques, nor the most knowledge.

Today, all I explained was just this statement. Other people may not explain its profundity. But Grandmaster Lu inferred that the fame that travels far and exceeds the height of Mount Meru indicates a spiritual level and whether one has reached a spiritual union with the buddhanature. This is the key point in this phrase: Their fame and reputation far exceeded the height of Mount Meru.

[1] Buddhaverse or buddha universe, is a novel and very appropriate term coined by Dr. Robert Thurman for 佛國, which has normally been translated as buddhaland, buddha-field, buddha realm, or buddha world from the Sanskrit word “buddhaksetra"