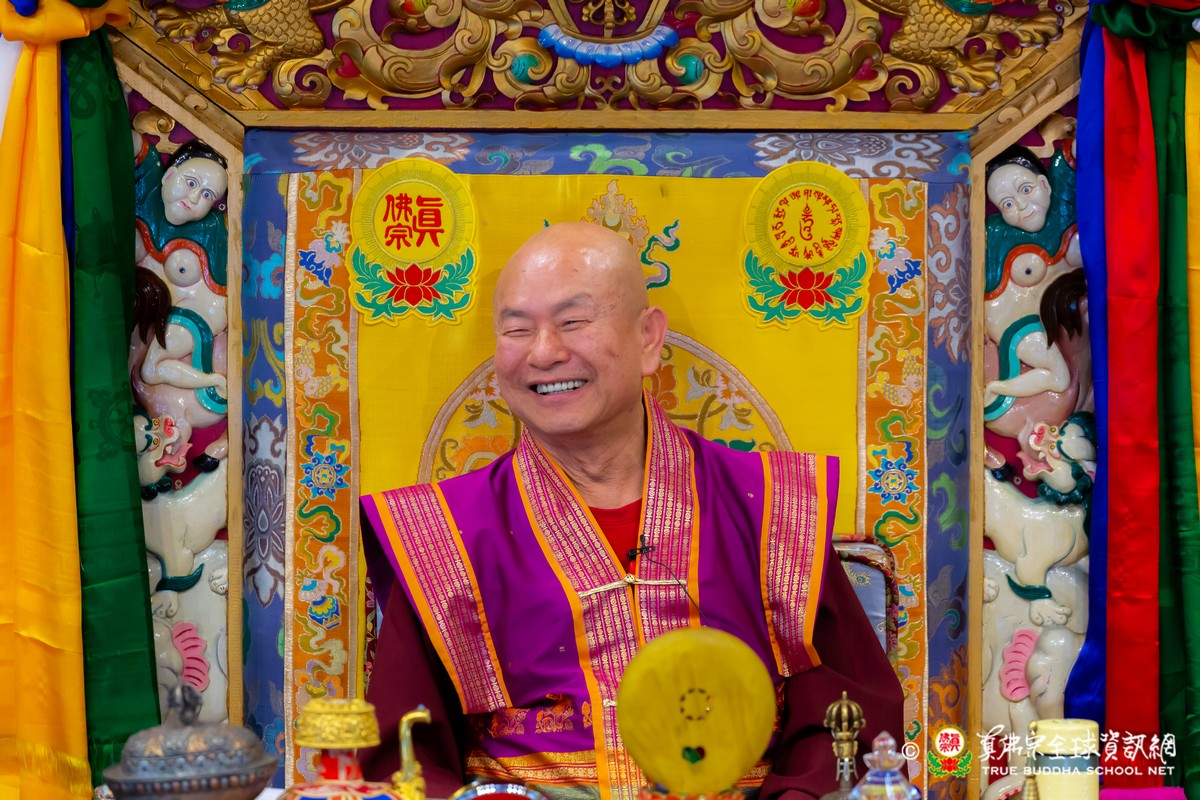 They appeared most magnificent, even when they had forgone all worldly embellishments. Their fame and reputation far exceeded the height of Mount Meru, and their deep faith was as strong as a vajra. Their dharma treasure showered nectar everywhere upon all beings as the most marvelous sound ever heard. They understood the profundity of the origination of causes and conditions and cut off all wrong views.

Let us now talk about the Vimalakirti Sutra: They appeared most magnificent... We know that a buddha is endowed with the thirty-two major marks of perfection and the eighty minor marks of physical characteristics. You can learn about the thirty-two marks of perfection and eighty minor marks from the Buddhist dictionary or glossary of terms. I will not go into them here. Otherwise, it will take me about a month to explain them in great detail.

A buddha appears most magnificent indeed! They have the most magnificent physical appearance or image. As you can see, a buddha statue always includes rays of light radiating from his crown, from his back and all over his body, and from the lotus that he is sitting or standing on. The whole body radiates light all over—its magnificence is the first and foremost.

When I was told, “This is Padmakumara!” during my [initial] vision of Padmakumara, all I saw was an exceedingly bright ray of light—a brilliant pure white light radiating all over. I could not see a form of the body at all! Wow, the brilliance was incredibly dazzling! It was indeed magnificent!

By comparison, when you look at your own face in the mirror upon waking up in the morning, you will see a dumb and disheveled face. Even I see a dumb look on my own face. In these reflections, we see our faces without any glow— in particular, ladies without makeup look lackluster, listless, and out of luck. Sometimes their dull looks are gray or even have traces of black. Dark spots and freckles have not been covered by cosmetics. Only after putting on makeup and applying several layers will the face finally shine. The result can look most magnificent, but it is only superficial.

Conversely, the magnificence that the great bhikkus and great bodhisattvas emit is the radiant rays of marvelous light from their hearts, and its magnificence is the first and foremost.

Look around! A healthy person radiates a healthy complexion. You’d say, “You are looking good!” After all, we cannot say to others, “You are looking bad!” [chuckles]. Looking good means you exude radiance and appear well. But I see some of my disciples having shady, shifty, or dreary faces—not bright and open. They look treacherous, toxic, sinister, and ruthless, so no one dares to approach them. Yet, some others are open and bright, spirited, full of optimism, generous, and quite popular. Most would not dare approach someone with a grayish face that is very rigid, insidious, or vicious.

If you visit a hospital to see a patient lying in bed and say, “Hey, you look good!” they will probably beat you to death if they still have any strength left [laughter]. They are so ill, and they also look ill. Someone who is sick will have a sickly face. Just one look at their face, and you can tell they are ill. All you want to say is, “How are you doing today? Okay?”

Anyone can look at their own reflection in the mirror and regularly check their complexion. How is it? If you are sick, of course you will show a sickly face. If you are healthy, then you will be full of vigor and radiance; you will also exude an exuberant air of might and grandeur. This is also a magnificent look.

Buddhas and bodhisattvas have magnificent appearances, including their facial physiognomy. Grandmaster can also read the face, palm, or body and even tell by touching bones. There was a very famous fortune-teller in Kuansi, Taiwan, who was blind and did readings by touching a person’s bones. I heard a few high-profile individuals, including the former Taiwanese president Lee Teng-hui, go to him for a reading. He could tell from the bones whether someone is made to be president, as they have bones that most ordinary people do not have. He could read a person by touching their bones.

As for the ears, we can observe one’s lifespan. We can also tell the lifespan from the line between the bottom of the nose and the upper lip. People who do face readings can interpret such things by observing the face. This facial reading is called the Three Divisions and Six Halls of Facial Physiognomy, and the six halls are: Hall of Romances, Hall of Wealth, Hall of Wisdom, Hall of Siblings, Hall of Followers, [and Hall of Luck].

From palm reading, we can observe the number of children one will have. By checking the “intelligent eye” on the palm, we know how intelligent one is. Your lifespan, love, and career are all reflected in the palm of one’s hand.

Sakyamuni Buddha has the mark of a thousand-spoked wheel engraved on his soles. It radiates rays of light, just like the dharma wheel. Raise your feet and check if you have it too, because if you do, it means you are a reincarnation of Sakyamuni Buddha. [laughter]

If something is still unclear, we can do a further divination through consultation with all kinds of spiritual youths, called Psychic Hearing. Lotus-Leaf Youth is the one I consult. One day, a girl from Singapore came for consultation. The Lotus-Leaf Youth told me this person had traveled to more than 50 countries in her life, including those Grandmaster has never visited. She has flown all over the world, here, there, and everywhere. She nodded and added that she used to be a flight attendant and indeed has traveled to more than 50 countries. You see, Lotus-Leaf Youth is amazing too. With the Golden Mother above him, he can tell you many things. I ask him whenever I need to know something, and he will report back to me.

[A master says sentient beings are attracted to Grandmaster’s magnificent appearance.] But I am old already! However, let me tell you that you can still have a magnificent appearance in old age by being kind and compassionate. In doing so, your face will also exude kindness and compassion. And if you are also amiable, people like being around you. Please don’t be despicable or so unlikeable.

Of course, you cannot be as handsome or pretty as when you were young, but you can still look wonderful. A magnificent appearance is to have long earlobes: like in the thirty-two marks of perfection, the lobes are so long that they touch the shoulders. Small mouse-like ears are not good. The eyes are so deep, like those belonging to the buddhas; by looking into them, it is as if one sees the four oceans. They are truly magnificent! The eyebrows are like the crescent moon. The nose is straight and slightly upturned. And the mouth is as magnificent as well. All the facial features—the Hall of Romances, Hall of Siblings, Hall of Wealth, and Hall of Followers are magnificent! The great buddhas and bodhisattvas all appeared most magnificent. This is my elaboration of this phrase.