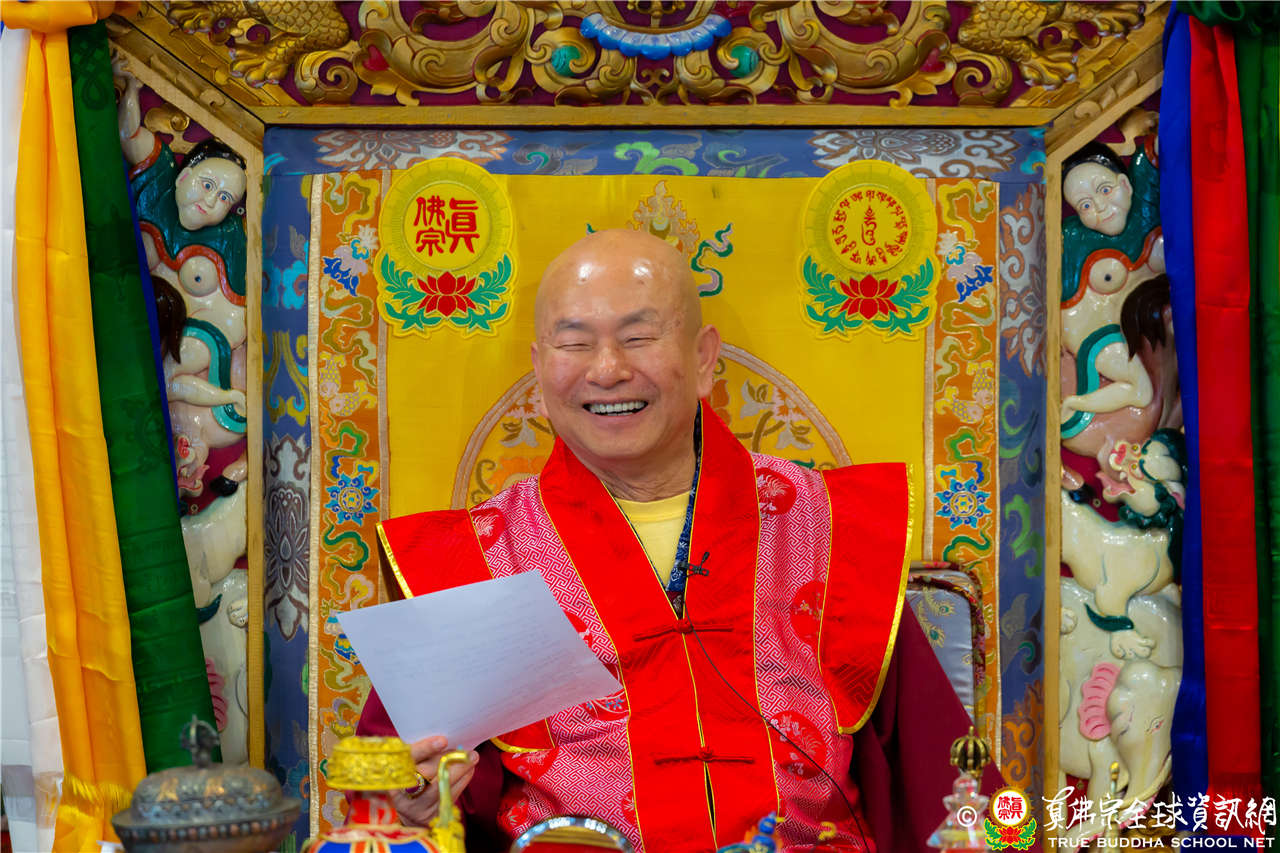 They had perfected their generosity, moral ethics, endurance, diligence, meditative stability, and wisdom, as well as expedient means. They comprehended unattainability and reached the state of unborn endurance. They could smoothly turn the non-regressing wheel following the course of nature.[1]

Now, let’s get to the main topic, the Vimalakirti Sutra. They could smoothly turn the non-regressing wheel following the course of nature.

We will talk about this sentence today. You might think, “It’s self-explanatory. What is there to talk about? The great bodhisattvas are non-regressing. And they go with the flow.” It is easy to understand that they are non-regressing because they have understood the ultimate truth of the buddhadharma. The bodhisattvas at the Immovable Groundnever fluctuate and will never regress. So “regress” does not apply to them. They are always the great bodhisattvas regardless of regression or not.

A true great bodhisattva can speak about the ultimate truth to everyone. Like what I spoke about yesterday regarding unattainability. Since it is unattainable, what is there to regress? The heart-mind is unmoved at the Immovable Ground. In such state, regression is irrelevant.

Knowing that everybody—I, you, they, nobody—has nothing to gain, the mind of the great bodhisattva at the Immovable Ground is completely still like motionless water. As such, they teach sentient beings how to achieve it and share the true meaning of buddhadharma, which is to turn the non-regressing wheel.

A great bodhisattva follows the course of nature and goes with the flow. What does that mean? In Buddhism, we talk about letting things run their natural course. In calligraphy, we often write, “follow affinity,” “go with the flow,” and “accept destiny.” Bodhisattvas do all these.

So, what is going with the flow? As for myself, my uncle introduced Grandmaster to dancing at the dance halls. I followed this affinity and spoke the dharma there. By meeting many dancing and drinking hostesses, they subsequently came for spiritual consultation, so I made use of the opportunity to share buddhadharma with them. I forgot to mention last time that a few of those hostesses later left their profession and became nuns.

There was also a clarinet player who became a monk at the True Buddha School because of me. He is now Reverend Lian Yi at the Taiwan Lei Tsang Temple. He played music at the dance clubs and was impressed to see Grandmaster Lu always maintaining a good distance from his dance companions. Indeed, I did keep a distance and never took advantage of them. I danced the tango, but I did not dance the blues since dancing couples would hug each other tightly under the dimmed light. The tempo was so slow to the point that dancing was not like dancing. Instead, it’s like two geckos sticking to each other in the dark. While playing in the band, he noticed me. Later, he came to my house to ask about buddhadharma. After I became a monk, he also asked to be ordained. He is now a monk called Reverend Lian Yi. Many people know him. It was I who guided him onto the path.

Don’t think I was merely dancing at the dance halls; I was still delivering sentient beings. As I mentioned yesterday, I also gave a fengshui consultation for the desk direction of the boss of the Snow White Big Ballroom in Taichung. Meanwhile, I introduced buddhadharma to him. This happened a long time ago.

What is this called? It’s called going with the flow! I deliver sentient beings in any environment I am in. Likewise for Vimalakirti. He delivers sentient beings anytime and anywhere, from high nobilities and royalties to lowly prostitutes in brothels and bars.

Someone once invited me to consecrate a deity at their bar. I took a long look at the deity, yet I couldn’t recognize this god with a long nose and a big belly carrying a rake. It turned out they worshipped the Eight-Precepts Pig or Pigsy.[2] I helped consecrate it even when I knew it was Pigsy.

Clubs, bars, and restaurants like to enshrine the Eight-Precepts Pig in the hopes of attracting passers-by who walk by their establishment. They will be influenced by Pigsy and out of nowhere feel an urge to go inside. I just went with the flow and consecrated the statue. In fact, I had consecrated almost all Pigsy statues in Taichung restaurants. This is called going with the flow! At the same time, I never diverted from delivering sentient beings.

Tantrayana is one of the Buddhist sects that goes with the flow and follows the course of nature. Other religious sects may not, but Tantrayana surely does. There are many Tantric dharma practices that follow the course of nature. Tantrayana has wealth deity practices for people that love money, like Red Manohara Vasudhara, who was the main deity for our homa today. If you practice Manohara—the Goddess Who Attracts Wealth—and pray to this deity, you can get mountains and valleys full of diamonds and endless amounts of money. Just one Manohara is quite incredible, not to mention the five directional fortune gods, the red, yellow, white, green, and black Jambhalas, and all the primary wealth deities.

Tantrayana has wealth deity practices, but Mahayana does not. Tantric Buddhist practices follow the course of nature. If you desire money, you can practice the wealth deity yoga. If you do it well, you can make lots of money. Upon receiving spiritual responses, you gradually enter the dharma gates. This is enticement following your nature; first, to entice you by satisfying your desire, and then to guide you onto the right path.

How about anger? If you often lose your temper, you can practice the wrathful deity yoga or heruka practices. First is to subjugate yourself, before subjugating other bad things. Greed, hatred, and delusion are the three poisons. The three poisons—or the five poisons—are then transformed into five wisdoms. If one is ignorant, very stupid, or insensible, then we teach him to practice the wisdom deities so their wisdom develops.

In Tantrayana, there are practices to first satisfy desire before guiding sentient beings onto the ultimate path. We counter greed, anger, and delusion by going with the flow, and there are many methods to guide sentient beings in different situations to turn them for the better. So through Tantric dharma practices, it is possible to gain fame, power, money, and sex… This is called following the course of nature.

Today I elaborated on the statement: They could smoothly turn the non-regressing wheel following the course of nature.

It means to teach the knowledge and wisdom of the buddhadharma to followers to continue the deliverance of sentient beings by following the course of nature. It is not easy to explain following the course of nature. Although you have often heard of “following affinity,” “going with the flow,” and “accepting destiny,”[3] you may not really understand what these really mean. Now, I have explained“going with the flow” very clearly—you can deliver sentient beings anytime, anywhere, in any circumstances.

And turning the non-regressing wheel means teaching everyone the ultimate truth of bodhisattvahood.