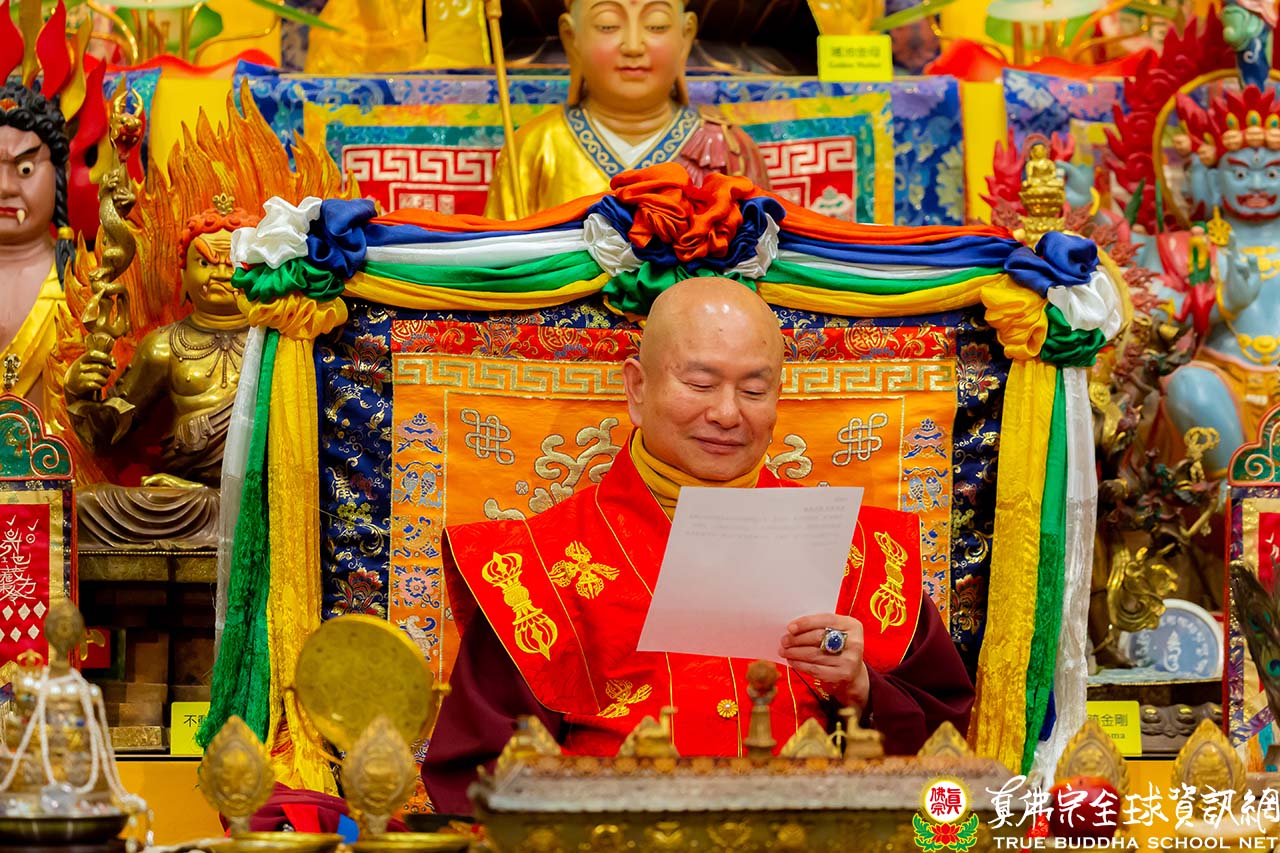 Their attainments of the great wisdom and fundamental conduct were solely due to the divine might of the buddhas. Together they formed a dharma-protecting fortress to uphold the true dharma. Their lion’s roar resounded throughout all ten directions. They took the initiative to deliver sentient beings and felt at ease in any situation.

Now, we will talk about the Vimalakirti Sutra’s Chapter One—Buddhaverse. We will expound on the phrase: Their lion’s roar resounded throughout all ten directions. Most commentaries explain this phrase very simply: The great bhikkus and bodhisattvas can speak the dharma like a lion’s roar.

When lions roar, every animal is instantaneously tamed and terrified, for lions are the king of the jungle. This means that when the great bhikkus and bodhisattvas speak on the dharma, they are like a lion’s roar; they can subdue sentient beings to follow the buddhadharma. As such, their fame spreads throughout all ten directions. This is the typical explanation by most speakers of the sutra: When the great bhikkus and bodhisattvas teach dharma, they are like the lion’s roar, and they can subdue all sentient beings. Therefore, they are known throughout the ten directions. That’s all there would be for the typical explanation.

However, Vimalakirti told me that this is not the case! What is it then? Can anyone try to guess? There is a nice gift here; it is an amulet of Kalacakra Buddha. [Several people answer.]

In the evening of Grandmaster Lu’s opening exposition of the Vimalakirti Sutra, weren’t there rolls of thunder in the sky? Yes, there were! On a clear day, the rumbling sound of thunder was loud and clear. People heard it and told me, but I did not say anything at the time.

The Vimalakirti Sutra is spoken by Vimalakirti. So, the thunder represented the arrival of Vimalakirti! When he arrives, the thunder strikes. How can a lion’s roar compare to thunder? Thunders can shake heaven and earth.

There is no dharma that can be spoken. Vimalakirti said, “When dharma is not spoken, it is most eloquent and unhindered. It is far beyond any speeches and winning debates.” When one is completely silent, it is likened to a thunder strike—it is the loudest of all! Vimalakirti was right.

Do you know that there are five kinds of thunder? They are thunders of the sky, earth, water, fire, and wind. The sky thunder that Vimalakirti refers to is the loudest—louder than the lion’s roar.

The earth thunder is the earthquake, which can have limitless power. When there is an earthquake, all animals quiver without exception. Earthquakes are written in the Buddhist sutras as rising East and sinking West or rising North and sinking South. When these happen, it is the biggest kind of earthquake. The water thunder is a tsunami. When a tsunami hits, everybody is scared, and people on the coastline scramble away as fast as they can, as tsunamis can sweep people away.

The fourth kind is fire thunder—volcanic eruptions! Everybody around the volcano will run away when it happens. A lion’s roar is typically only on a mountain and scares only the animals who hear it. But a volcanic eruption can bury a whole city. It has happened throughout history; it is even written in the Bible. What was the famous one? Pompeii. The whole city was buried. Volcanic eruptions are also formidable. Finally, the wind thunder is known as a typhoon in East Asia or a hurricane in America.

Earth, water, fire, wind, and sky thunders—when these five thunders rumble together, everyone will be awed or daunted without exception. They are the loudest sound, much louder than a lion’s roar, right?

Your answers earlier, such as the true dharma, the four unhindered powers of understanding and eloquence, et cetera, were not wrong. The Great Master Vimalakirti is endowed with great wisdom and eloquence; nobody ever wins over him in debates. That’s why the Buddha’s disciples—the arhats, the Fragrant Rigorous Youth, and even Maitreya Bodhisattva feared Vimalakirti.

Vimalakirti’s reputation was widely known in that city. So when Sakyamuni Buddha asked people to visit the sick Vimalakirti, nobody dared to go. He was the most eloquent, yet he is the loudest when he is silent—like thunder. That’s why thunder struck when I began expounding the Vimalakirti Sutra. Everybody heard it. It is rare to have thunder in Seattle, but that evening, rolls of thunder resounded in the sky.

Two days ago, on my birthday, June 16th, 2022, or the eighteenth day of the fifth lunar month, there was a special cosmological phenomenon where seven classical wandering planets started to line up into a straight line. It was in the news. Some television stations said five planets, and some said seven. Five planets will align first—Mercury, Venus, Mars, Jupiter, and Saturn, and then followed by Neptune and Uranus. They will stay in alignment for a few days.

They indicated that the last alignment of seven planets occurred 77 years ago. So it happened only once—or twice—in my lifetime; perhaps it occurred the year I was born, too. It all started on my birthday. What does it signify?

Also, that evening, on June 16th, 2022, a magpie followed me into the temple hall for my birthday celebration. Everybody saw him, right? He was flying in between the buddha parasols all night. The magpie also followed me when I walked out. Wasn’t it interesting? “Who was that magpie?” I asked Vimalakirti, and he replied, “That’s me!” I continued, “Where do you live? Now you transform into a magpie flying here and there. Where are you, anyway?“ He told me, “I live inside your heart.”

Then I asked again, “What are you doing here?” He remained silent—the thunderous sound of silence! I did not give up, “Does the alignment of the seven planets mean anything?” He did not speak—and just left the sound of thunder.

It is evident that some auspicious signs accompany Grandmaster Lu’s exposition of the Vimalakirti Sutra. My exposition is unique and profound, and it goes beyond the surface. Only I talk about the thunder, which signifies Vimalakirti.

Some people are very eloquent and persuasive; they speak so effortlessly in their sutra exposition that stars fall from the sky like rain showers. They always win in debates, and they can convince anyone. Nonetheless, remaining silent far exceeds the former.

A true lion’s roar occurs when one can tame sentient beings and deliver them even when they are silent! As the greatest true sage, they deliver sentient beings without a spoken word.

Grandmaster’s sutra exposition is primarily to encourage the audience to maintain the “right thoughts,” to be free from any hindrances, afflictions, and attachment to self to allow for the attainment of eternity.

So, if you go to an extreme, believing that there is no cause and effect, then you are gravely wrong. It is wrong to ignore karma! Living in an illusory world, there will always be non-empty illusions—albeit they are very slight. Consciousness still exists—even at the very slightest! So, while living in this illusory world, it is never completely empty; therefore, karma always exists, and you are bound by it.

If you were to say, “I understand emptiness. Everything is emptiness, so I can do anything I please because whatever I do is empty anyway,” then you are neglecting karma, and you would be very wrong!

In the illusory world, although everything is illusory, there still is the law of cause and effect. When there is an illusory cause, there is an illusory effect. The slightest thought that appears in your mind will bear consequences. In fact, anything will! Never believe otherwise. If you do, you will fall into nihilism.

This is an important point. Where there is a cause, there will always be an effect; even when you create an illusory cause, there will be an illusory effect or retribution you must suffer. Just like what the attorney dharma sister Jennifer Chou said during the birthday celebration, “Wherever you have been, traces will be found there!” These “traces” refer to the effects, and they are not nothing!

In sum, we are currently living amid emptiness and existence. Although the Vajra Sutra is talking about emptiness and empty nature—and many people have realized this notion of emptiness—the law of cause and effect can never be annihilated. In the illusory world we live in, when there is an illusory cause, there will be an illusory effect. This is a very crucial point.

Beyond the simple explanation of the phrase Their lion's roar resounded throughout all ten directions, Grandmaster relates the lion's roar to thunder, and according to Vimalakirti, silence is the most thunderous. This is excellent, so please keep it in your mind.

[1] Buddhaverse or buddha universe, is a novel and very appropriate term coined by Dr. Robert Thurman for 佛國, which has normally been translated as buddhaland, buddha-field, buddha realm, or buddha world from the Sanskrit word buddhaksetra.