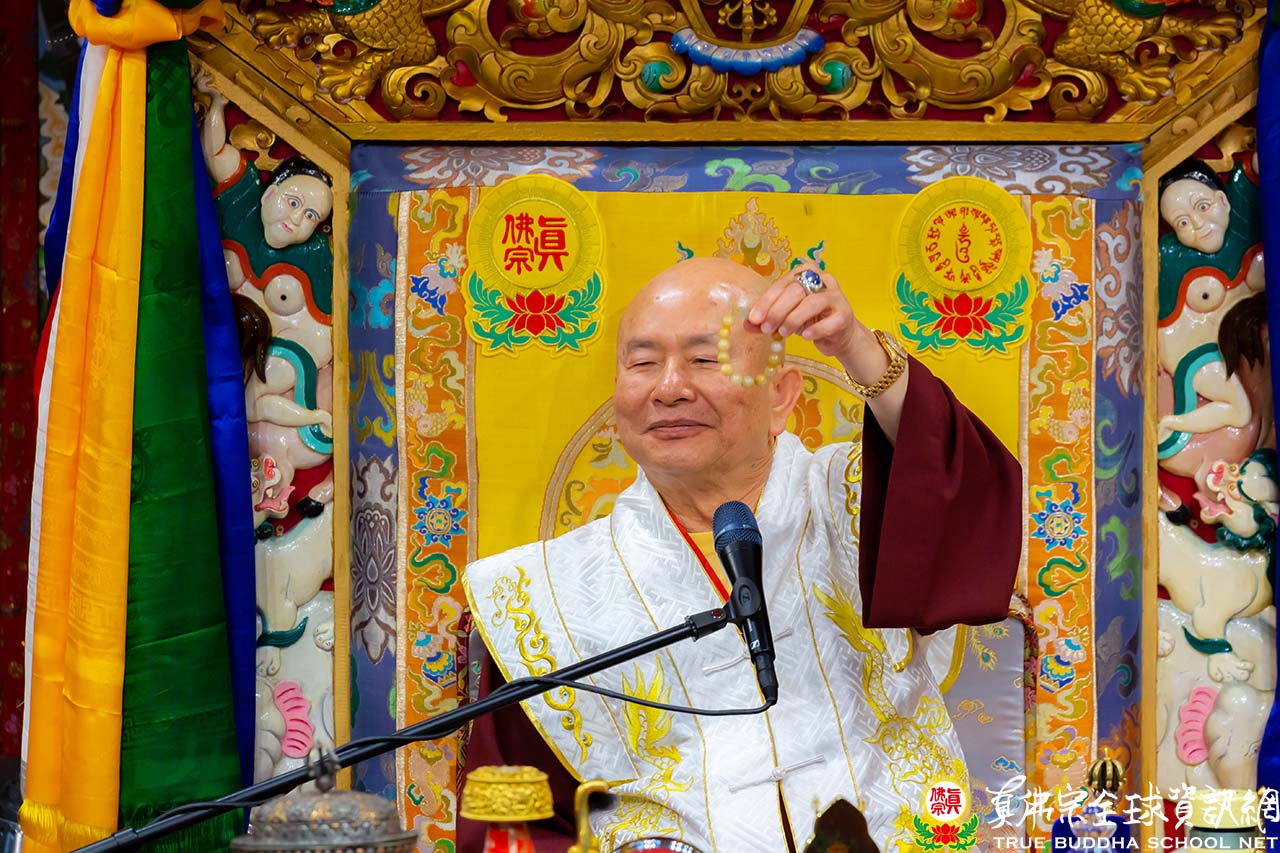 Their attainments of the great wisdom and fundamental conduct were solely due to the divine might of the buddhas. Together they formed a dharma-protecting fortress to uphold the correct dharma. Their lion’s roar resounded throughout all ten directions. People were naturally enticed to join, and the atmosphere was affable.

Last time, I pretty much covered all about great bhikkus. But do you notice that great bhikkus—great arhats—seem to lack feelings and emotions? That’s because they renunciate this evil world and its five turbidities to liberate themselves. They do not wish to stay in the saha world; they renunciate the world and cultivate purity by observing the precepts, eliminating all afflictions of the human world, and conquering all maras—demonic obstacles. They have a strong mind of renunciation; they renounce the saha world and strive to attain arhatship. A great bhikku does not want to stay in this world.

During Sakyamuni Buddha’s era, many people attained arhatship, and some of them also delivered many beings despite their renunciation. To become an arhat, a great bhikku must have a strong mind of renunciation; he does not concern himself with matters of the world. They choose to live in seclusion and practice in the mountains or deep in the woods. They will never care for their families as they believe each will deal with their own causes and conditions. Having said that, many later disciples of the Buddha became arhats who went on to deliver sentient beings.

For example, if Grandmaster Lu keeps to himself upon his enlightenment, does not give any dharma teachings, and does not deliver sentient beings, he would just be a great bhikku. However, Grandmaster Lu now sits on the dharma throne, giving dharma teachings and delivering sentient beings as a Padmakumara—meaning Lotus Youth. “Kumara” refers to “Great Master,” which has the connotation of being a bodhisattva.

The Great Master Vimalakirti, too, is a great bodhisattva who came to the saha world to deliver all sentient beings—to awaken and enlighten them. In the saha world, he was called a bodhisattva, and in the buddhaverse, he is a buddha named Jinli Tathagata. We can say that the Vimalakirti Sutra is basically spoken by Vimalakirti.

So, there were …thirty-two thousand bodhisattvas, and the assembly of virtuous and knowledgeable spiritual practitioners…

Many sentient beings attended Sakyamuni Buddha’s discourse of the dharma in the Amra Garden. Later, Grandmaster will talk about the many participants in the assembly.

Does anyone know the four methods that bodhisattvas use to entice sentient beings onto the path? There are four methods: giving, loving words, beneficial conduct, and likeness-association.

One of the four means of conversion is giving, which is quite common. At the end of World War II, the Taiwanese were very poor. Christian missionaries came to Taiwan, and they enticed people to go to church by giving away flour. If you believe in God, you will get a bag of flour which you can take home. So, you went to church because you were poor. We jokingly called it “the flour faith.” They provided salvation to people by giving flour as the almsgiving. Back then, if you attended regularly, you would be baptized, after which you could register to receive flour on a regular basis.

If we were to give away $100 to everyone who comes to Rainbow Temple to hear the dharma teaching, this place would be totally packed. This is called deliverance by giving. Even if it’s only $50 per attendee, it will still attract many people; everyone will come, young and old, perhaps even their pets, to hear the dharma teaching. We are all very familiar with this method.

As we all know, the elephant-trunked god of wealth—Ganapati—the Red Jambhala—was originally an evil god. He ate people, many of them, and was very ferocious. Nobody could subdue him because, as the son of Shiva, he was extremely powerful. To transform and deliver him, Avalokitesvara Bodhisattva utilized the method of likeness-association.

So, Avalokitesvara Bodhisattva transformed into a female Ganapati. The male Ganapati was pleasantly surprised at the gorgeous female Ganapati before him, with her fair and soft skin. He wondered where she came from and drooled all over her. He became a “pig,” although he was an elephant with a long trunk. [Grandmaster jokes.] Ganapati tried to court her but was always a short distance away from success, as she was a transformation of Avalokitesvara with great supernormal power.

When he was about to give up, the female Ganapati turned around and approached him. So he started chasing her again. While keeping her distance, she offered her conditions: She’d agree to be with him if he would never eat human beings again. Ganapati immediately agreed, “Okay, okay, I will not eat humans anymore, I’d just eat you!” [chuckles] She also asked Ganapati to support buddhadharma. “Sure! What else do you want?” He agreed to all her conditions since he was already so fascinated and infatuated by her. So they became husband and wife, and Ganapati became a good god—Red Jambhala. In Japan, he is the God of Bliss—Kangiten.

That’s how Avalokitesvara Bodhisattva delivers sentient beings by associating with them through transformations. They can transform themselves to be exactly like the beings to be delivered.

Similarly, Yama Dharma Kings used to be super evil gods who killed many sentient beings. They caused a massive number of deaths and injuries everywhere. Knowing it, Manjusri Bodhisattva could not bear it anymore, so he entered [the king of all] Yama Kings and transformed into the mighty Yamantaka—The One Who Subdues the Yama Kings. Manjusri Bodhisattva, in the form of Yamantaka, in turn, overpowered all the Yama Kings. They all submitted to Yamantaka and became good. Both Yama Dharma Kings and Yamantaka have very similar forms, with a bull’s head.

This is called deliverance by likeness-associations, utilizing the same type of body as the being to be saved and requiring them to support buddhadharma. Another method utilized by the bodhisattvas is through beneficial conduct: By allowing sentient beings to receive benefits from the bodhisattvas’ conduct, they are enticed to take refuge in the buddhas. And lastly, there is also the deliverance by kindness or kind words, which means treating others nicely and politely, speaking amiably, and being hospitable.

This is unlike our reverends at the Seattle temple, “Sorry, we will be closed in 10 minutes.” [Grandmaster demonstrates the waving gestures.] The visitor said, “We came here from faraway Tacoma; please let us take a quick look. We heard about this temple, and it’s our first time here, so please let us in. It’s ten minutes before you close.” “No, no, no, you go!” Allow me to say, even if people want to stay until seven o’clock, you should stay open until then. In which case, you would be delivering by kindness.

You’d tell them, “Every Saturday night at 8 we have a ceremony, and Grandmaster Lu teaches buddhadharma.” Also, “Every Sunday afternoon at 3, we have a fire offering ceremony at the Rainbow Lei Tsang Temple in North Bend, where Grandmaster Lu talks about Buddhism.”

Speak nicely and welcome them. Tell them, “We have free sutras and books. If you need anything, we also have a gift shop. If you are interested in any buddhist items or buddhas or bodhisattvas, I can tell you more about them.” It is a simple matter to give a warm welcome and invitation. On the contrary, they'd never come back again if you shut the doors right in their face. In deliverance by kindness, we need to be kind and polite to everyone.

Once, the Seattle temple received a phone call from a family who came from Australia. They asked if the temple could give them a ride from the nearest bus stop close to the Lake Sammamish Parkway. Because they came from Australia and the whole family was planning to stay awhile, they had a lot of luggage which would be too hard to carry up the hill to the temple.

The reverend who got the call retorted, “No way! We are precious dharma teachers! How can we help the laity? You are lay practitioners; sorry, we cannot help you!” So the whole family hauled their luggage, big and small, bit by bit up the hill and eventually got to the temple. Nobody cared where they’d stay the night; nobody asked. Instead, you should’ve taken good care of them!

That Saturday evening, it was cold, and the temple doors were closed for group practice. The whole family paced back and forth outside, looking in [unsure what to do]. And nobody noticed them. Grandmaster was seated on this dharma throne and saw them outside. So I got off my seat, walked down to open the doors for them, and invited them in. Later that night, during the dharma teaching, I talked about it and asked for their forgiveness.

They were in great difficulty carrying their luggage up the hill. As ordained monks and nuns, you should have helped them! Then you would be helping and delivering sentient beings! Due to the incident, they were about to turn around and leave. But because Grandmaster himself offered an apology [on behalf of the temple and its sangha] and talked about it publicly on the dharma throne, they decided to stay and help cook in the kitchen for a month. One of them happened to be a chef. They could feel that Grandmaster is caring and compassionate. You need to understand this! You need to take care of everyone. This is deliverance by kindness.