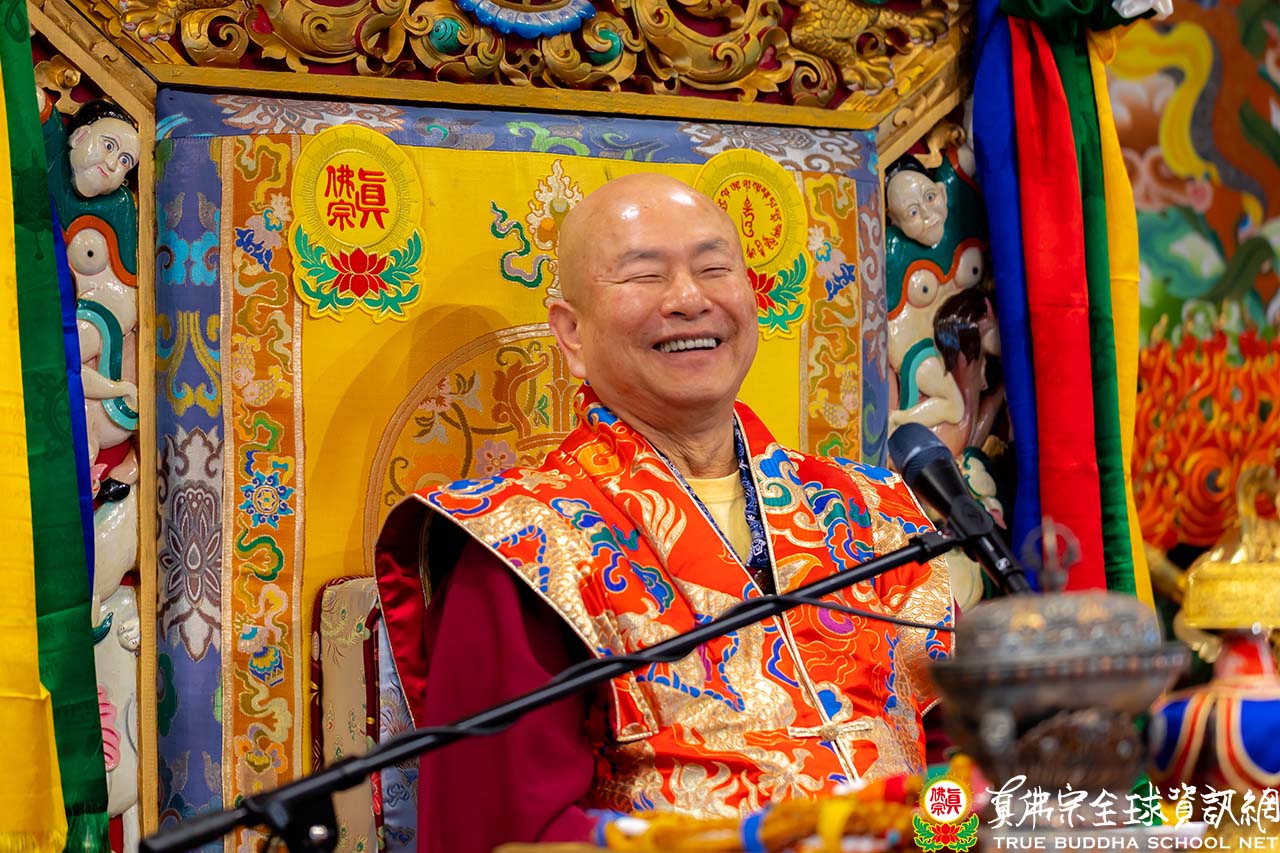 We talked about Buddhaverse in chapter one yesterday. The same concept applies in Tantrayana: a buddhaverse to a Tantric practitioner (Tantrika) is when you wake up every morning and visualize that you are in a buddhaverse. You are the main deity (yidam). One’s father is a male buddha or buddha father, and one’s mother is a female buddha or buddha mother. How about one’s spouse? They are the buddha’s spouse. And the children are the buddha’s children. You are the main deity—your yidam. And you view your father, mother, spouse, and children as buddhas. You transform your house into the palace of your yidam. When you go to work, your boss is a great bodhisattva, and your coworkers are all bodhisattvas or great bodhisattvas. Surrounding people are also spiritual cultivators in the buddhaverse. If you always visualize this, you are in a buddhaverse.

Thus have I heard. As everyone knows, sutras unfailingly begin with this phrase. Venerable Ananda’s memory is remarkable in that he could remember all that he saw and recount all the Buddha’s teachings, [which became] the sutras.

In ancient India, the custom did not allow attending disciples to take notes while their guru spoke; it would have been impolite. They could only rely on memory, and Ananda had a great memory. Thus have I heard means that “I,” referring to Ananda, was there and heard it.

At one time refers to the “time” of the teaching; there still was the concept of time then. At one time, the Buddha was in the Amra Garden—which was a garden or grove, offered by the Lady Amra to the Buddha, accompanied by eight thousand great monks, thirty-two thousand bodhisattvas, and the assembly. I will later explain great monks—also called great bhikkus.

People asked Grandmaster, “How did they know there were eight thousand great bhikkus; did they count one by one?” They asked how the Buddha knew that there were eight thousand great bhikkus, or even more, thirty-two thousand bodhisattvas. Sakyamuni Buddha spoke without a microphone, so how could all those people hear the dharma teaching? There was no microphone back then. Nowadays, we need a microphone to deliver discourses. Otherwise, the speech won’t be very audible since our voices don’t reach very far.

The Buddha has transcendent power; therefore, the Buddha naturally knows! Arhats also have supernormal[2] power and they will know, as anyone with supernormal power can know. By closing their eyes, they can tell the number. So, do not doubt it!

Grandmaster once visited Gridhakuta, otherwise known as the Vulture Peak, where the Buddha gave dharma teachings. At a glance, we could see the dharma seat of the Buddha in a rectangular space, sized at less than half of this homa hall, marked by a few bricks. It was surrounded by hills on two sides and steep cliffs further down. Behind the seat, there wasn’t much space either.

Such is the place where Sakyamuni Buddha expounded the dharma, which is very limited. How many people can fit in there? Not very many. Upon seeing it, a thought came to Grandmaster that the great monks and bodhisattvas must have been sitting on tree branches! [laughter] I wondered, what is the maximum number of people that can fit in there? The sutras often state an assembly of two thousand and five hundred, or one thousand two hundred and fifty, as stated in the Amitabha Sutra. Yet, when I saw Vulture Peak, it could probably seat at most two hundred people, and not the thousands of people—unless they were stacked. [laughter] Who knows how the calculation came about [unless they used supernormal power].

Let me explain this term, great bhikkus. It is very important! Bhikkus refer to monks, while bhikkunis are the nuns. Buddha’s disciples are divided into four groups: bhikkus, bhikkunis, upasakas, and upasikas. Upasakas are male, and upasikas are female lay practitioners. Bhikkus and bhikkunis are ordained—and they are also called the monastics.

A great bhikku can refer to a senior monk over sixty years old or a monk who relentlessly abides by the precepts. Arhats are very strict in keeping the precepts and are considered great bhikkus.

Alcohol is strictly prohibited. One of the sutras states that if someone were to serve alcohol to a monk or a spiritual cultivator, they will be born without hands for five hundred lifetimes. That’s how severe the precepts are! One cannot sip—or touch—alcohol, let alone women. Such are Sakyamuni Buddha’s rules!

[A monk] had better not lay eyes on a woman. When a monk sees a woman approaching, they should lower their heads and look at the ground. If they see a bhikkuni, they should avoid eye contact, and if they must exchange words, they cannot speak more than four sentences. The precepts are extremely stringent. Speaking more than four sentences is not allowed, let alone being physically close to a woman. They must keep their distance. They treated women as if they were the COVID-19 virus. They quickly hide when they see women coming to avoid the encounter entirely. That is how things were back then.

Bhikkhus and bhikkunis are not allowed to cook for themselves; they eat only once a day before noon. Snacking is not allowed, and no such thing as eating while watching TV and lifting one’s legs. There is no such thing as delicious food. They must visualize their food to be poo and their drinks to be pee. Everything they ate came from their alms begging. They have no kitchen and, of course, no refrigerator. Yet, I heard that some monks or nuns live at home with two or three refrigerators. Some have a refrigerator to themselves at the dorms and don’t want to share it with other people. We will have to start inspecting our dormitories in the future. The rules were very strict and applied to all aspects of life.

Back then, they lived under the trees, in between tombs, and inside caves. Now, you have your own beds. You must make your beds! Fold your blankets. Tidy up! Clean up! There should be no dust at all where you live.

Of course, they could not touch money and had no savings, whereas now, you can have a bank account. Their clothing was very modest in earth tone, unclean, uniformed, and nothing decorative. They ate food from the alms-begging once a day; they slept under the trees or in between the tombs and traveled by foot. That’s how they lived.

They followed the footsteps of the Buddha and endured hardship in spiritual cultivation. Only by strictly abiding by the precepts and enduring the hardship could they be called great bhikkus. Only in this way were they able to attain arhatship.

If they didn’t follow the rules, then they violated the precepts, as opposed to nowadays, as spiritual cultivators enjoy their lives and adorn themselves with gold or luxury. Nowadays, they are just tiny, tiny, tiny bhikkus. [chuckles] How can they be referred to as a great bhikku?

Things have changed now. Nowadays, Grandmaster wears colorful and ornamented outfits as well as some jewelry. That is because Grandmaster goes with the flow to fulfill the wishes of sentient beings. My disciples offered these things—everything I wear and use: lama outfits, underwear, bags, everything. When Grandmaster wears or uses these offerings, they are pleased and very happy. On the surface, Grandmaster seems to live an opulent life, but in fact, I live a very meager and prudent life. I never spend any money on myself, except for gas.

This is my explanation of the term great bhikkus: They are the monks who vow and keep the Three Sets of Monastic Precepts, and strictly abide by them. It also refers to a senior monk over 60 years old. I hope this leaves a strong impression on you.

[1] Buddhaverse or buddha universe, is a novel and very appropriate term coined by Dr. Robert Thurman for 佛國, which has normally been translated as buddhaland, buddha-field, buddha realm, or buddha world from the Sanskrit word “buddhaksetra.”

[2] A buddha’s supernormal power, sometimes referred to as transcendent power, is beyond supernatural since this power is very natural for a buddha.

Next discourse on the Vimalakirti Sutra: Discourse 3, 28 May 2022 - Chapter One—Buddhaverse (Continued)

Previous discourse on the Vimalakirti Sutra: Discourse 1, 21 May 2022 - Chapter One—Buddhaverse