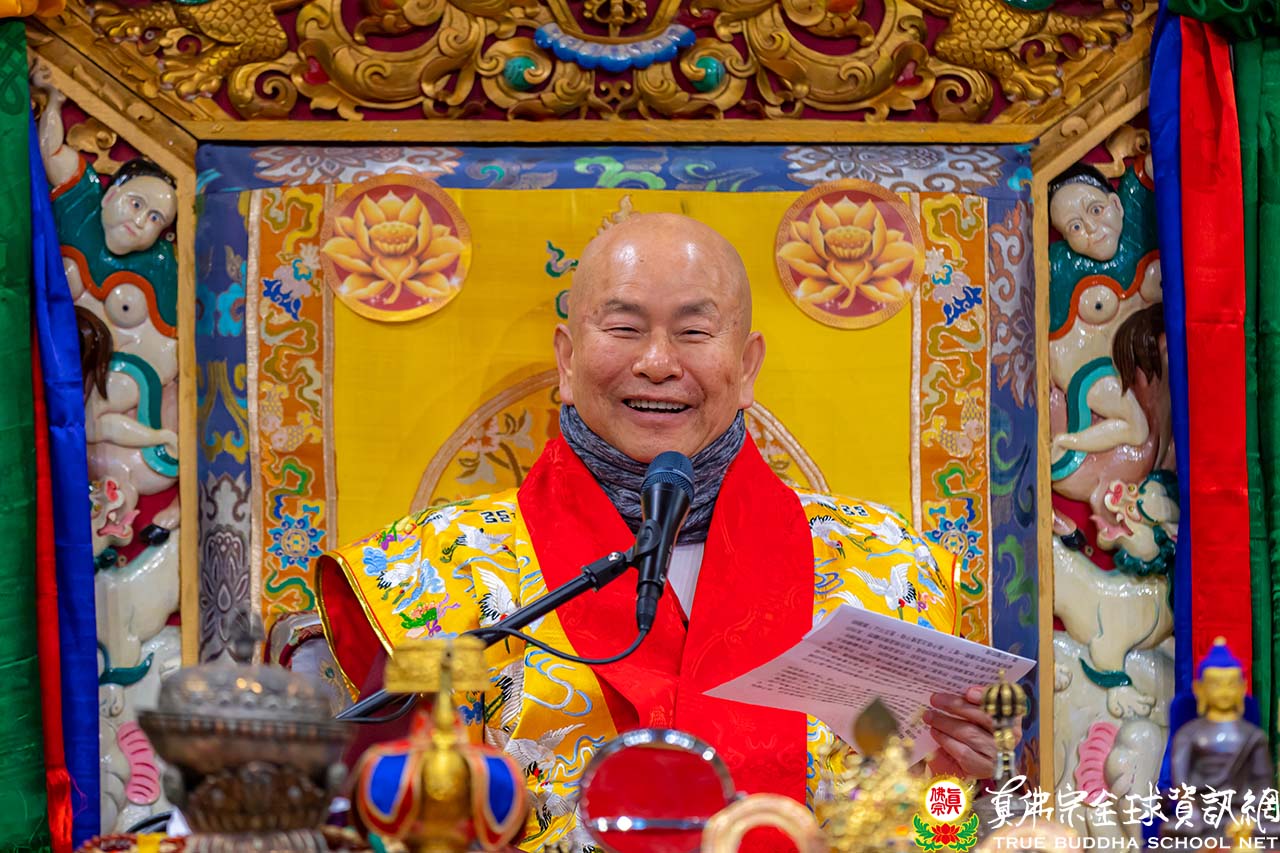 “Subhuti, what do you think? Do the bodhisattvas adorn the buddhaland?”

Subhuti replied, “No, World-honored One. Why? Because adorning is not adorning; it is [merely] called adorning.[2]

Subhuti replied, “Very big indeed, World-honored One. [However,] the Buddha says that [only a] non-body is called a big body.”

We will now expound on the Vajra Sutra. Let’s talk about this following paragraph.

Subhuti replied, “Very big, indeed, World-honored One. [However,] the Buddha says that only a non-body is called a big body.”

This excerpt is very meaningful, and I will be expounding it today. The key point here is on the word “big.” What is meant by “big”? In buddhist cosmology, the universe has Mount Meru at its center, where on its peak lies TrayastrimsaHeaven. Halfway up Mount Meru are the heavens of the Four Heavenly Kings; at its foot are four major continents and eight minor continents, with fragrant seas in between. Mount Meru is of course the biggest of all. So in his analogy, the Buddha used Mount Meru to represent something big. He would ask, “Is MountMeru big or not?” [Knowing that everyone would agree that it is big.]

Is our universe big? Big indeed! Is our solar system big? Of course! But our solar system is just one of the numerous solar systems out there. Imagine that, just one! Even with the advancement of science and technology, we still can’t quite grasp the actual size of the universe.

Is America big? It is! Is China big? Yes! Is India big? Big indeed! Is Brazil big? Brazil is big as well! Between nations, who is currently most powerful? We don’t dare say, with the big two vying each other. Both China and America are in rivalry to be the most powerful. Everyone wants to be the big boss, the leader! [Grandmaster is doing an impression.] “I am the United States of America, I am the world’s superpower! I dominate the whole world! Many countries listen to me. Who dares not listen?”

The South China Sea is relatively closer to China and further away from America, no? Yet the US is still getting into the South China Sea. America has been sending aircraft carriers there and constructing military bases on island reefs. America hopes to control everything. [Grandmaster jokes] We have Avalokitesvara in the South China Sea and the East Sea Dragon King in the East China Sea. There are also Dragon Kings in the Four Seas of China. If the Seas of China become part of America, where would they live? [laughter] It’s a joke, a modern-day joke!

Having seen all this, Grandmaster feels that the world is a lot like the stories in the famous kungfu novels written by Jinyong. Everyone is fighting to be the leader! So what Jinyong wrote is not without philosophy. Everyone is competing to be number one. It isn’t just between countries, even the wealthy are fighting to be the wealthiest. Two rich men don’t see each other eye-to-eye, eh? Amazon’s boss is very rich, but Tesla’s boss is also very rich, right? When Amazon’s boss saw Tesla making money designing electric cars, he probably thought, “what’s the big deal? I can make them too and beat you on it.” Lo and behold, Amazon is now making electric cars too. You see, both are extremely wealthy, yet they are fighting each other to be the richest.

Not just that, rivalry even exists among religious sects! If you go to Fo Guang Shan, you won’t say that Tzu Chi is good. If you do, everyone will stare at you and exclaim, “What did you just say?!” [Grandmaster says this whilst mimicking a sour face. The audience proceeds to laugh.] Or perhaps, if you go to Tzu Chi and say that Fo Guang Shan is good, [they’d say,] “Where are you from? Are you trying to cause trouble?!” [Grandmaster laughs] In fact, everyone in this world is striving to be the number one.

Monk ID cards were also issued under the association. Grandmaster has a monk ID card issued by Ven. Wuming, then president of the association. I still carry it with me, so I am a real monk. Grandmaster is not a fake [chuckles]. Let me see if I have it with me so I can show it to you. If I don’t have it with me… then, oh well. Oh, here it is! [Grandmaster takes out the monk ID card from his wallet.] The membership card of the Buddhist Association of the Republic of China! Dharma name: Lian-Sheng, Origin: Chiayi, Taiwan, Name: Sheng-Yen Lu, Male, Birth Date: June 27, 1945, Monk ID No: 002083. [Grandmaster proceeds to show the card to the audience.] This is a certification from the association. Monks must have a certificate of ordination. Since we are now independent, monkhood certificates are now issued through our own True Buddha Foundation, right? See, this is a monk’s ID card. Who is in charge? Nowadays, no one. Everyone is the boss!

Amidst all these fights and contention, let’s listen to what Sakyamuni Buddha says, “The one who is in harmony with the Dao is the biggest.”If you are in union with the Dao, then you are the greatest. What kind of body does the one with the Dao have? It’s the “non-body,” not a physical body, and not any other form.

Only when you are in union with the Dao that you are the number one. It is not the first place that everyone is striving for. Students too want to be number one in exams. [He] must be the number one every time, the desire to win is very strong. Must be number one! When he became number two, he killed himself. What a pity! What use is being the top student? Grandmaster Lu repeated the same grade twice and yet he founded the True Buddha School. He has many disciples taking refuge in him and is now sitting on the dharma throne. Let me tell you, as long as you repeat a grade, you can establish your own sect! [Grandmaster jokes and chuckles.] It’s not necessarily true that being number one is good, so don’t fight for it [don’t be so attached to it].

So you thought you live in a luxurious mansion, eh? Well, how big is it? The square footage of all Rainbow Villa buildings is over 16,000 square feet! 16,000 square feet is huge, right? The Rainbow Villa is a mansion. But then, there are also 20,000 square feet houses, and one-acre houses, two-acre houses and so on. Have you seen them? How could you ever compare? We can’t! These things have forms. So you think you live in a mansion and therefore you are the biggest or the best. You’d think that when you drive a Rolls-Royce, you are a big shot. Let me tell you, there is a Ferrari that costs over a million dollars! A Rolls-Royce only costs half of it. One of those Ferraris can get you two Rolls-Royces! Then there’s Lamborghini, who can customize you a car for 10 million dollars. So, you want to compare? You are tiny! The Rolls-Royce is small [cheap] compared to that. Therefore, nothing should be compared! Let me tell you, anything tangible is not big!

The Buddha says, “The one in union with Dao is the biggest.” Anything without form is the biggest. Anything tangible, with form and appearance is therefore small. I have emphasized this for you.

“Subhuti, if someone has a body as big as Mount Meru, is his body big? What do you think?” Subhuti replied, “Very big, indeed, World-honored One. [However,] the Buddha says that [only a] non-body is called a big body.”

A “non-body” refers to anything without form and is therefore called the “biggest.” What is anything without form or phenomena? It is the Dao, it is buddhanature. If you cultivate spiritually to the point where you have reached no phenomena, where your buddhanature has appeared, that would be the biggest! You’re reading the Vajra Sutra, yet you don’t understand what the Buddha says—that [only a] non-body is called a big body. What is a non-body? Non-body is formless and without any phenomena. And it is the biggest! It is the Dao, the True Suchness; it is buddhanature!

[1] Vyuha was translated to Chinese as 莊嚴, which has been translated to English as dignified. Vyuha means magnificence, splendor, adornment as well as supernatural qualities.

Next discourse on the Vajra Sutra: Discourse 32, 13 November 2021 - Chapter Eleven—Supreme Merits Without Condition