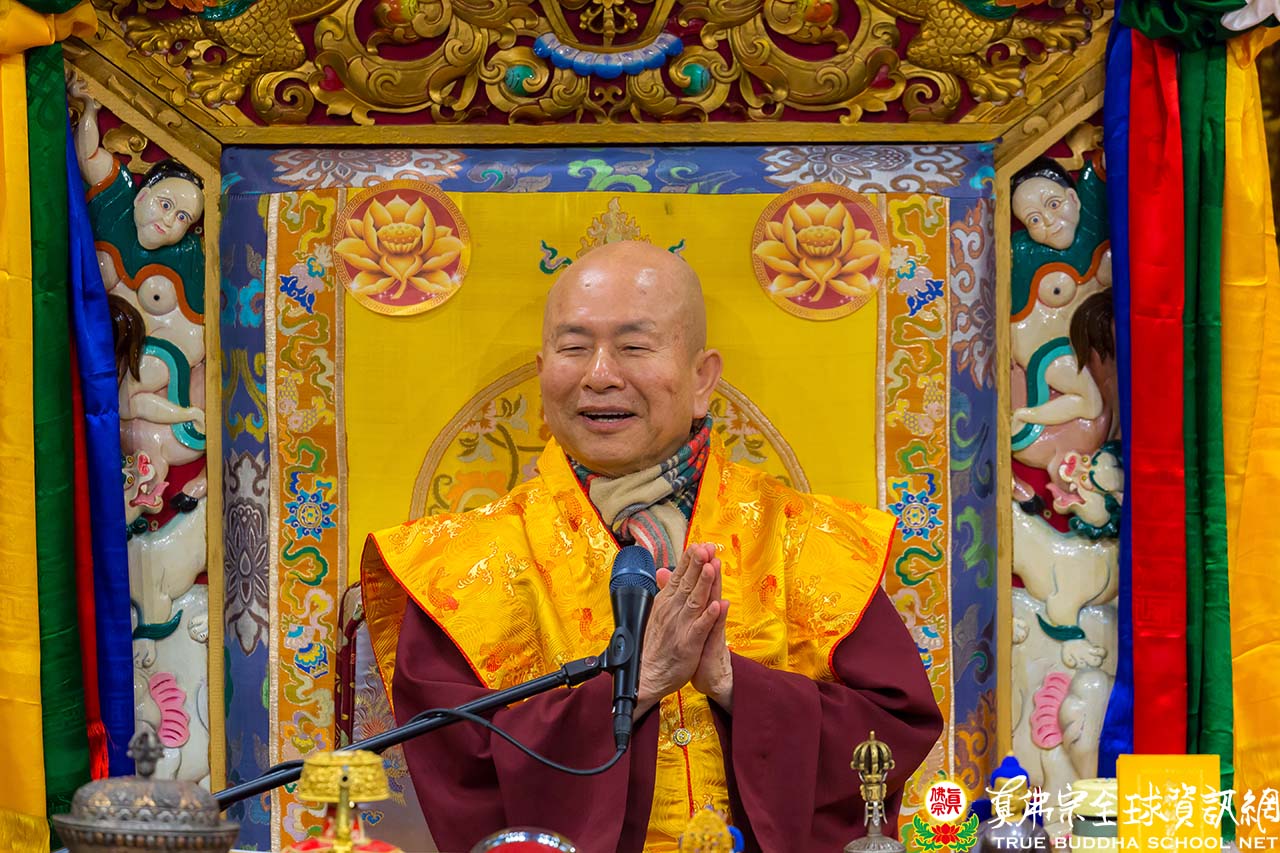 “Subhuti, what do you think? If one fills the three-thousand-great-thousand worlds[1]with the seven kinds of precious jewels[2]as an act of giving, would his merits and blessings be enormous?”

Subhuti replied, “Enormous, World-honored One! Why? The Tathagata says his merit is enormous because it has no characteristics of merit.”

The Buddha said, “Should there be someone who upholds this sutra, and furthermore, expounds it to others, even if it is only the four-line verse, his merit exceeds the former. Why? Subhuti! Because all buddhas and all anuttara samyaksambodhi dharma come from this sutra.

Now we will expound the Vajra Sutra. Notice that there is a comparison here. If one fills the three-thousand-great-thousand worlds with the seven kinds of precious jewels as an act of giving, would his merits and blessings be enormous? Should there be someone who upholds this sutra, and expound it to others, even if it is only the four-line verse, his merits would exceed the former.

This is a comparison. There are many comparisons and analogies used within the Vajra Sutra. An act of giving of the seven kinds of precious jewels to fill the three-thousand-great-thousand worlds generates tremendous merits. However, explaining the four-line verse—no view of self, no view of others, no view of sentient beings, and no view of lifespan—would generate merits much greater than the former.

I would like to elaborate one point here. There are three kinds of giving: the first kind is giving wealth or money to generate merit, such as filling the three-thousand-great-thousand worlds with the seven precious jewels for charity. The second is giving dharma, speaking on the dharma or teaching dharma to people. This is sharing buddhadharma to others as an act of giving. Its merit is better than the merit of giving money. The third kind is giving fearlessly. What does that mean? It involves equality in giving and forsaking. Only a bodhisattva gives equally.

Yesterday, I told you about an old disciple of mine who borrowed money from me. Right before he walked away with a cloth bag filled with all my savings, he turned his head and glanced at me. It’s as if a hundred years have passed since then. He borrowed money from me, and I loaned him the money. I gave all my personal savings to him. That was giving fearlessly. I gave it all and I never expected him to pay me back. Did I know how he would spend it? I had no idea, who knows perhaps he used it for charity, to do good deeds or to do good things. This is how I always think. I rarely spend any money, and there someone helped me spend it. Money is meant to be spent, right? If money is not spent, it’s not money, it’s just paper. [You may say,] Grandmaster, since you don’t spend your money, why don’t you just let me spend it for you? [The audience is laughing.] If you use it for charity, sure, absolutely. This is called giving fearlessly and giving equally. Money is to be spent; if money is not used, it’s just paper. What’s the difference with toilet paper? You see, money is meant to be used. I had some personal savings, but I never used it. He took it, as if he helped me use it. This is fine! It’s giving equally. You must think like this! I won’t ask him to pay back the money, I won't go after him. I won’t! This is equivalent to giving equally and fearlessly, an act of giving of a bodhisattva. Always think of others, [thinkthat] people take it away to do good deeds.

Is there any money that belongs to you on earth? No, it’s only by chance that you have this money. If someone helps you spend the money, you should thank and express your gratitude towards him for helping you use it. This is also the spirit of my guru, Jesus. If someone takes your outer clothing, you should give him your underwear. Then, you would be totally naked. [Grandmaster is laughing.] If someone takes your suit pants, you should also give him the underpants. This is the spirit of Jesus! Jesus also gave fearlessly, and he has the spirit of a bodhisattva. How did he pray to God on his last night? He knew that he was about to be captured and crucified on the cross. How did he pray? He said, “They didn’t know what they were doing. God, please forgive them.” He asked God to forgive those who crucified him. “They did not know what they did.” Jesus also gave fearlessly.

You must cultivate spiritually till you achieve the three kinds of giving; giving dharma is better than giving money, giving fearlessly and equally is better than giving dharma. You need to understand these kinds of comparisons because the spirit of bodhisattva is extremely remarkable. Jesus also showed his fearlessness, equality and forgiveness. He prayed to God for forgiveness for those who harmed him, and that's how great Jesus is. In our spiritual cultivation, we should be a bodhisattva, we should strive to become a bodhisattva. Bodhisattvahood should be our goal.

The Vajra Sutra speaks on equality and fearlessness. And here is a comparison. If one fills the three-thousand-great-thousand worlds with the seven kinds of precious jewels as an act of giving, would his merits and blessings be enormous? Should there be someone who upholds this sutra, and expound it to others, even if it is only the four-line verse, his merits would exceed the former. Giving dharma is greater [than giving wealth] and giving equally and fearlessly is even greater [than giving dharma]. This is a comparison.

Today, I want to clearly explain Chapter Eight—Arising according to the dharma. There are comparisons in it. One is giving seven precious jewels, and another is giving dharma. And I add one more—giving equally and fearlessly. If everyone gives equally and fearlessly, the world will be at peace. What is world harmony? Confucius’ ideal is a world of harmony and great unity. This ideal will turn the world into a pureland. Every single person thinks for others; there are no arguments, no disputes, no contentions between people, no jealousy and no envy. However, if you are envious or jealous when someone is better than you, or you only think for yourself, then that is not the spirit of Buddhism. You still have “self”, you are not in the state of no-self. If you truly attain the realm of no-self, you will think for others, never for yourself; and that’s a bodhisattva. Bodhisattvas do not ask for themselves but for others.

Look at the world, when you turn on the television, every single person is very selfish, every family is selfish, every country is selfish. Buddhist principles include this concept of world harmony and it is part of the buddhadharma. Unconditional loving-kindness and compassion for all is part of the bodhisattvahood. Don’t be so selfish; do not always think of yourself, especially envy and jealousy are really bad.

The comparison Sakyamuni Buddha placed in this chapter eight is very important. If I hadn’t extrapolated it, you would not understand. The comparison is that explaining the four-line verse alone exceeds giving wealth. Adding equal and fearless giving [to explaining the four-line verse] would be even better. Everything would be perfect then. [The audience is clapping].

Why are there wars, trade wars or any kind of wars among nations? That’s because they think in the interest of their own nations. Instead, why don’t you consider other countries? On the news, I saw that someone owned many cats, and the cats were all over the place, littering the community. A neighbor complained to the management team, who then warned the owner of the cats. He turned hateful towards the complaining neighbor who lived across the hall, so he blocked the neighbor’s door with garbage. I saw this on the television. See, he only cared for himself! He should’ve been considerate of his neighbors, right? His many cats pooped everywhere and made the whole community stank. How could the neighbors put up with that? When the neighbor complained, the cats’ owner retaliated, tied and blocked his neighbor's door to lock him in. The neighbor had to call the police to have his door opened. It was all recorded in the surveillance camera. That was utter selfishness, you can immediately tell! It’s similar with countries. Think about it …and those few presidents, what are they like?!

As a Buddhist practitioner, we should not criticize others. We just feel that human life, like a movie, is very short. You see, [Master] Lian Yin has now gone. Seeing other people passing away, one’s heart is as hot as fire. But that’s not for others, as the next would be my turn. The next one would be me! Think about it, what are you fighting for? Don’t fight all the time! Instead, give equally and fearlessly!

[1] Tri-sahasra-maha-sahasra-lokadhatu, or trichiliocosm means the three-thousand-great-thousand worlds. Some call it the billion-fold universe, or the whole cosmos

Next discourse on the Vajra Sutra: Discourse 24, 16 October 2021 - Chapter Nine—Phenomena is Non-Phenomena