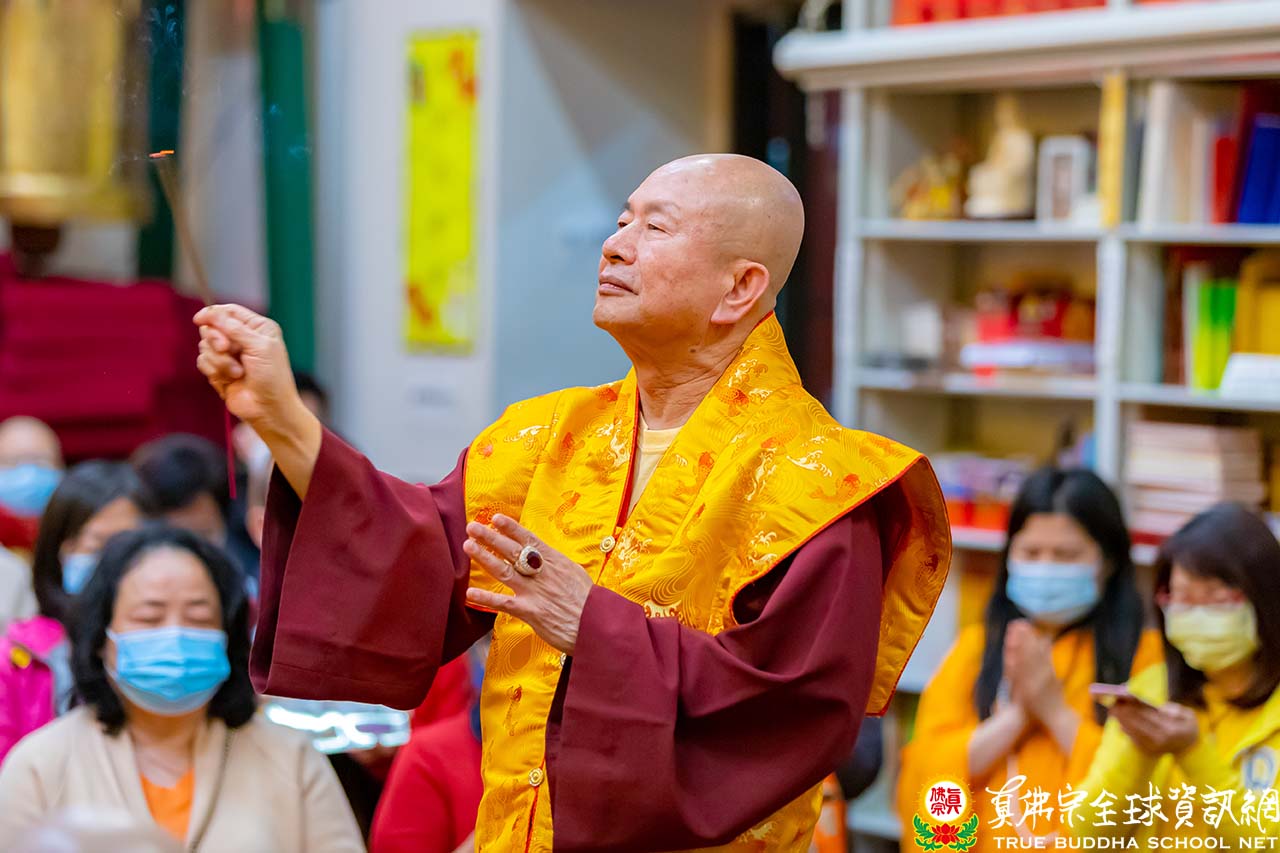 Subhuti replied, “In my understanding of the meaning of the Buddha’s teaching, there is no fixed dharma called anuttara samyaksambodhi, and there is no fixed dharma spoken by the Tathagata. Why? Because all teachings of the Tathagata cannot be held and cannot be spoken. They are not dharma, and they are not non-dharma. Therefore, all sages are distinguished by effortless motiveless dharma.”

Now, we will expound Vajra Sutra. Seven—Nothing Gained, Nothing Spoken. Let me read the excerpt of the sutra.

…all sages are distinguished by effortless motiveless dharma.

This statement is extremely important. Chapter Seven—Nothing Gained, Nothing Spoken. The last time we spoke about Nothing Gained, we talked about it the whole night. Now, we will talk about Nothing Spoken. What Subhuti meant was that the dharma spoken by the Tathagata or by Sakyamuni Buddha cannot be held and cannot be spoken. They are not dharma but they are also not non-dharma. Why?

Let me ask everybody. What is not dharma and what is not non-dharma? Why did he say as such, not dharma and also not non-dharma? The other time, we talked about what non-dharma are. Fortune telling, face reading, divination, astrology, predictions, how much blessings you have, Ten Feet of Blue [Yi Zhang Qing], Purple Star Astrology [Zi Wei Dou Shu], Royal Polar Study of Destiny [Huang Ji Ming Shu], Chinese Bone Weight Astrology [Ping Liang] of Yuan Tiangang, Fengshui and Geomancy of Li Chunfeng; they all belong to non-dharma.

What is not non-dharma? Anyone can explain this? [Someone had answered but was inaudible] My ears were clogged with earwax this morning. It doesn’t matter what you said because I have not heard it. I know that you were talking but I didn’t hear anything. [Grandmaster is laughing] Let me tell you what “not non-dharma" is. There seems to be dharma, yet there also seems to be no dharma. Remember, it seems like there is dharma spoken yet it also seems like there is no dharma spoken.

What is not non-dharma? It means that there seems to be dharma yet there also seems to be no dharma. Is there any dharma spoken? Nothing spoken. When one reaches the highest realm, there is nothing spoken. That’s why when Bodhidharma was invited to speak on dharma at the Shaolin Temple—where he faced a wall to practice in seclusion at Mount Songshan, behind the temple—when he got out, everybody knew that he had become a high-adept and invited him to speak on the dharma. Once he got on the dharma seat, …haven’t I talked about this before?... he took a clipboard and slapped it. He said, “That’s the end of the dharma teaching,” then he got off the seat. Now, I have also finished speaking the dharma; that’s it. No dharma to be spoken, nothing spoken, there was basically nothing said. Bodhidharma basically did not say anything, he did not speak on the dharma. He just got on, slapped and got off. That was his dharma teaching. And this is the highest realm!

How come? Let me explain. We all know there are many countries on earth, right? Are there many countries? Yes, many. In each country, there are many people, right? Many people, many houses, many cars running around. Now, America and China are both considered big countries. I don’t know what the two countries are doing, and I personally don’t get involved in politics; I never do. I just find them fighting with each other, I don’t know what for. Their fighting is unrelated to me; I live my life and they fight theirs.

Think about it. What is the highest kind of realm? This is a very profound knowledge. In my eyes, there is no earth, no countries, no sentient beings, no people. Really, what are you vying for? In my eyes, there are no countries, no people, no leader of the leagues. Now they are fighting to be the chief of the league, like how they fight to be the lord of the martial arts league in the novels written by Jinyong.

In your mind, there seem to be ants yet there seem to be no ants. Human beings are just like ants. In your eyes, are there ants? Have you thought about ant countries? There are countries of ants. If you study the animal kingdom, you will know that ants live in colonies. They have countries or colonies. For their own benefits, they fight with each other. Do you give dharma teachings to ants? Deducing from this, do human beings give dharma teachings? Do ants give dharma teachings? This is what the “not non-dharma” is all about. This analogy I gave is perhaps different from what you think to be the Vajra Sutra.

It is true that the Vajra Sutra destroys everything. Do you gain anything? The other day I asked Tenzin Gyatso, “What would you gain a hundred years from now?” “Nothing gained,” [Tenzin replied]. Then I would ask, “Then why do you study? Why do you want to study?” Let me tell you, please be seated. This is how you should answer: “Because I want to study to enrich my knowledge so I can understand what Grandmaster is talking about; to comprehend nothing gained and nothing spoken.” [Audience is clapping] This is the correct answer. You want to gain the understanding of why there is nothing to gain and why there is nothing to speak. You want to comprehend this. That’s why today, I’m still expounding the title Nothing Gained, Nothing Spoken. Sakyamuni Buddha seemed to have given dharma teachings, but also did not seem to have given dharma teachings. That’s how it is.

Why is this? Subhuti said, “Therefore, all sages are distinguished by effortless motiveless dharma.” What is the effortless motiveless dharma? Doing anything for no reason at all is called effortless and motiveless. I don’t do it because of anything. No whys. [Unlike] say, today, I did good and helped a lot of people, so tomorrow I’ll check whether my good deed was reported in the newspaper or on television. I would feel good when I see myself doing good deeds. If I had done great charity yet it wasn’t published on the media, then I will not do it again. Those are dharma with effort and motive.

How pure is your effortless motiveless dharma? Is there anything that can be held? Of course, effortless motiveless dharma means there is nothing to be held. Is it done for any reason? No, it’s not done for any reason. You just naturally do good; never do evil, always do good. Once you’ve done it, it’s the same as if you have not done so. Even after you have spoken, it’s as if you have not spoken. The Vajra Sutra is very deep and profound. Don’t underestimate it. Do you think it’s easy to explain it? No, it’s not easy to explain!

What is the proportion of your purity, i.e. purity level? You don’t want to be a mundane being who has done charity today, but want to see the newspaper, hold a press conference, expect photojournalists and reporters to come [to capture the moment]. For instance, tomorrow you want to check the newspaper and expect it to report the good deeds that you have done, to show that you are a good person. If that’s so, you are not qualified to become a bodhisattva or a buddha; you can only go to the heavens. What is a bodhisattva? A bodhisattva is there always for others, never for oneself; essentially thinking for others but not thinking for oneself. Only when such qualities are fulfilled could one be called a bodhisattva. If you always think of yourself, you have a “self” or “I”; as such, you’re not a bodhisattva. The most you can reach are the human and heavenly realms. A bodhisattva is always thinking for others, never thinking of “I,” never for oneself. Only then are they called bodhisattva. However, there are also differences. [The audience is clapping.]

What is all sages are distinguished by effortless motiveless dharma? What is not dharma and not non-dharma? All teachings of the Tathagata cannot be held and cannot be spoken. There is no fixed dharma spoken by the Tathagata.