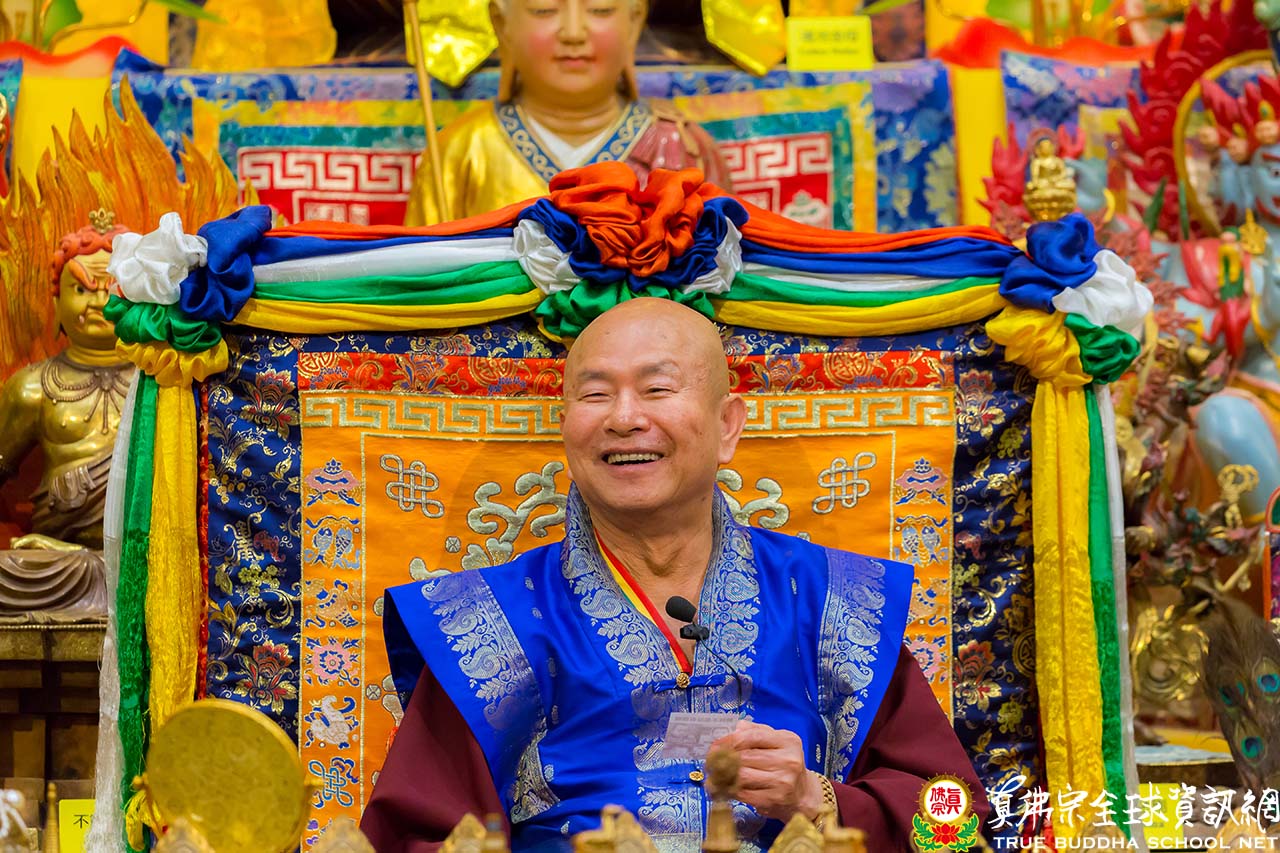 [The following includes one of the Q&As due to its relevance to the Vajra Sutra.]

Grandmaster, Shimu and True Buddha school, how do you do? Grandmaster, in your book number 216, “Q&A from the Contemporary Dharma King” on page 158, you mentioned of the Intrinsic Suchness of all Dharma.[1] You said that it cannot be obtained from spiritual cultivation. Doesn’t that mean that chanting sutras and practicing dharma are useless? Please resolve my confusion.

What I mean is, that spiritual cultivation is the methods: they are the deity yoga, the preliminary practices… There are five kinds, right? At first, merit accumulation dharma practices or the merit accumulation path is the performance of good deeds to accumulate merits. That’s one method. Then, the preliminary dharma. Then, seeing the path where you finally recognize buddhanature. Then the path of practice, to realize the buddhanature. Buddhanature is not practiced [buddhanature has always been there]; instead, you should rely on these methods and tools to realize it. Lastly, there is the ultimate path, which is the buddhanature itself. As I’ve said, intrinsic suchness is not to be obtained through spiritual cultivation. Chanting sutras and practicing dharma are just tools or means. When the intrinsic suchness of all dharma truly appears, these tools are no longer of any use.

Now I will expound on the Vajra Sutra. Wow, we’ve just only started? What time is it?

The bodhisattva finally asked, and this is the key point, “How about the other bardo spirits or any spirits who are passing by? The ones with no relations to you whatsoever—not your relatives, friends, ancestors, disciples, nor didn’t die from the coronavirus, do you bardo deliver them too?” I could not answer, because I don’t bardo deliver those without affinity nor relations with me whatsoever. The Worthy Leader Bodhisattva told me, “Your bardo deliverance has a form. It’s called bardo deliverance with form.” I asked him, “What should I do then?” He told me that in the future I should change and chant “Bardo spirits with affinity, bardo spirits without affinity, please get on board the dharma vessels.” He continued, “This way your merits will become immeasurable.” The merits are unparalleled.

That’s what the Worthy Leader Bodhisattva told me. I said, “thank you.” [with palms joined] The bodhisattva said, “loving-kindness and compassion for all, equally and unconditionally.[2] You want to bardo deliver them all. Only then is the merit unparalleled. But don’t keep them in mind that they have merits, or that the merit is unparalleled. Only when you don’t think about it would it be called bardo deliverance without form.” The bodhisattva told me this.

The sutra today is Chapter Four—Non-dwelling in Marvelous Conduct.

Now, do you understand? In the past, there was an old landlord who provided congee during a famine. In Cantonese, [congee] is called “jūk.” The landlord had his servants cook lots and lots of congee. During the famine, people didn’t have food, and everybody was famished. They heard about this old landlord offering congee. [Grandmaster is trying to pronounce congee in Cantonese.] Basically, Cantonese pronunciation is in between Mandarin and Taiwanese. This old landlord was handing out congee. Many people came and his servants were handing them out. The servants told the landlord inside, “Many rich people also came for the congee. We know they are not poor.” The landlord said, “It’s okay. Just continue to give, whether they have money or not.” The servants said, “The neighbors also came, even though they are financially stable.” The old landlord said, “That’s fine.” Then some servants rushed in and reported, “Someone came for a bowl and after he finished, he went for a second helping. He even brought back a bucket.” The old landlord said, “That’s okay. Let him have it. That’s fine.” “No way! He didn’t come by himself, he brought his whole family, young and old. Even brought his grandchildren!” The old landlord replied, “No problem.” “Some people came repeatedly; they’d come every day and eat. They treat this place like a restaurant.” The old landlord still said the same thing, “That’s fine.” “Should we set a restriction at what time they can come and not otherwise?” The landlord said, “No need, no problem.” He was fine, even when people took the congee buckets home with them; he would have his servants prepare more. The landlord always said no problem.

The charity of this old landlord is called the act of giving without form. He gave it all. He is non-dwelling in charity. The wicked, the worst kind of people in the village—murderers, robbers, scammers, liars, they all came for the congee. The servant went in and told him, “Oh no! The killers, the swindlers, bandits, rapists, they all came for your congee.” The old landlord said, “No problem. That’s fine. They can all come. It doesn’t matter if they’re good or bad. Just serve them all.”

Very simple, let me tell you. This is an act of giving without dwelling on form. Merit, nor non-dwelling on merit, should not be talked about. However, Sakyamuni Buddha has said this kind of merit is unimaginable. Therefore, the old landlord is very wealthy in each of his lifetimes. He asked for nothing in return; he did not ask to go to heaven or to become a god. But in each lifetime, he will be rich and healthy for innumerable kalpas.

After the pandemic when everybody can live normally again, I really hope that the Ling Shen Ching Tze Temple [Seattle Lei Tsang Temple] can provide for everybody, neighbors, all visitors regardless of how long they have been visiting—anybody, they are all welcome to eat. Let them come and eat, without restrictions. Neighbors can come, the whole family can come! They can come eat here or take the food home; they can give to their neighbors. It’s completely okay. Anything is fine. We will just cook. We will just do it until our savings is gone. We’ll just sit and eat until the mountain is empty. [laughter] Reverend Lianzi [the accountant at the Seattle temple] will complain, “Our temple has no more money, what should I do? We’re eaten up by disciples worldwide. They all come, stay and don’t leave, they eat here every day. They eat breakfast, lunch and dinner. Not only that, but they also brought all their families. Not just their families, but their neighbors too.”

Let me tell you. It will never be all gone. It’s immeasurable merit! Don’t be like how right now, you’d provide lunches but say, “Sorry, this is not for you, you’ve been here for too long.” Then, you’d take the bento back. People are afraid of the masters and the reverends who will scold. The bento had been brought out, but was taken back. [laughter] That’s so awkward. If you have brought out the food, just let them have it. It’s not worth such trouble just for a bento, right?

So the immeasurable act of giving is the way to go!

Sakyamuni Buddha has said that all the bodhisattvas in their six perfections have been without forms or phenomena. This is the key point that Sakyamuni Buddha mentioned in the Vajra Sutra: no form and no phenomena. Grandmaster must perform bardo deliverance with no phenomena. All sentient beings, sangha members, monks, nuns, bhikkhus, bhikkhunis, temple kitchens, and volunteers who provide food and beverages, [should perform acts of giving with no phenomena] in the future, after the pandemic is over.

Because of the pandemic, we have restrictions to prevent community infections. That’s why they came up with some restrictions: limited number of people inside, open hours, duration of stay, etc. Didn’t you have an announcement posted, saying that people can’t have meals at the temple if they stay over three months? Anyone staying over three months cannot get any bento? Actually, it shouldn’t have mattered. Just let them eat, even for our neighbors. If they want a bento, let them have it. During the pandemic, they can eat under the tent outdoors or take it home, either way is fine.

In the future, Seattle Lei Tsang Temple and Rainbow Temple should perform acts of giving with no form. Don’t be afraid of people eating your food because when they eat, you will receive blessings. The people who made the food will gain merits, so would the abbot of the temples. Whoever donates money to help the temples will also have merits. This is all without form. This is very important, very crucial.

…he should not dwell on the form of giving, nor should he dwell on sound, smell, taste, touch or anything at all…

[1] 法爾本然 or dharmata is also explained by His Holiness Living Buddha Lian-Sheng in his book number 240 Gateway to Infinite Dharma Treasure, in an article entitled the Dharmata of True Sunyata. …When a human being dies, everything stops, and his body returns to extinction. In our Tantric practice, we need to train in the visualization of emptiness, meditation and entering samadhi. This is the intrinsic suchness of the true emptiness.

Next discourse on the Vajra Sutra: Discourse 15, 12 September 2021 - Chapter Five—Real Seeing According to the Truth