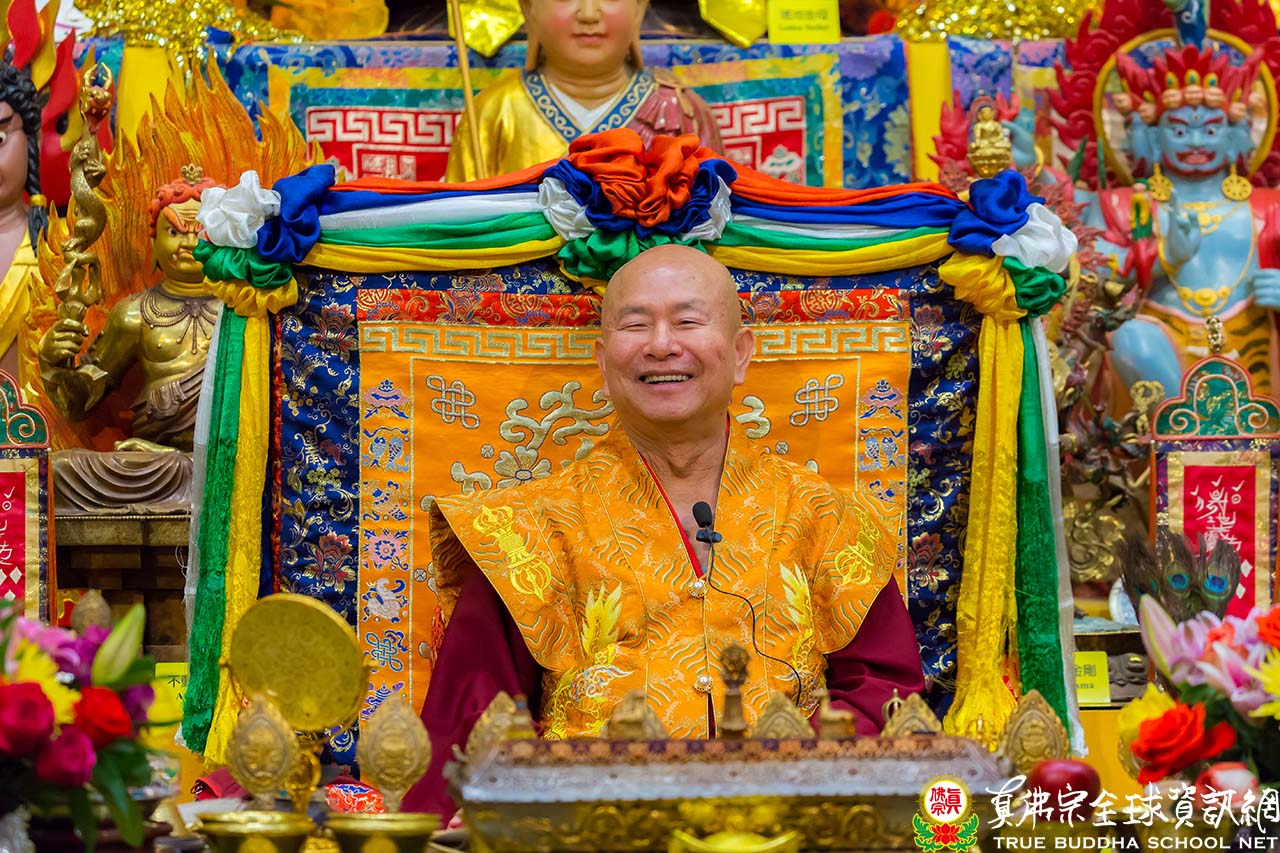 I will now expound the Vajra Sutra.

Actually, we haven’t even started on Chapter Two—Subhuti’s Request. We’re still talking about Subhuti himself, and this may take quite some time. Someone noted on a copy of the sutra text, that I am to start on Chapter Three—The Right and Ultimate Meaning of the Great Vehicle on August 21, 2021. They meant that I should already be finished with the earlier chapters. But no! I haven’t finished what I want to say about Subhuti yet!

The Buddha put his whole heart into teaching Subhuti, observing Subhuti’s past lifetimes. I have mentioned that in his past lives, Subhuti was an extremely angry person. Therefore, the Buddha’s first lesson to Subhuti was the endurance paramita.[1] I have previously discussed the perfection of endurance. To what extent must one cultivate and perfect endurance? To the point where “there is no more endurance.”

In the beginning we have to endure, and this is unbearable. It’s not easy to remain unaffected when someone insults you. Typically, what was it in Taiwanese? Like a pile of ashes: with a puff of breeze, the ashes are pitter-pattering everywhere. At first one is calm; then someone makes a thoughtless comment or casual remark, and one is suddenly a pile of ashes flying all over the place! What was it in Taiwanese? Any Taiwanese here? There’s a saying which describes a hot-tempered person. [nobody says anything.] Jeez, it‘s got to be me, this old chief who thought of it. You Taiwanese didn’t even say anything. This type of person is described as “ashes scattering in the wind.” With the slightest breeze, one scatters all over the place.

Subhuti was like this: when the Buddha taught him the paramita of endurance, he endured and kept on enduring until finally, endurance became natural. Slander, accusations, whatever it was, he just let it come and go naturally. He didn’t feel anything at all. When one reaches this point, it’s no longer “endurance” because one does not feel that one is enduring anything. It has become so natural that there is no more “enduring.” This is what you want to achieve.

No defamation. No accusations. Nothing exists. Can you do it? The Buddha told Subhuti that to realize unborn endurance he has to reach this state.

At this point, you might still not understand, but as I continue my exposition, you will begin to understand. This is what the Vajra Sutra is about! It is one of the essences of the Vajra Sutra, one of its meanings.

It’s because there is no “endurance” that it is called “endurance.”[3]

First, he was living in a cave at Vulture Peak where he meditated and cultivated. In his samadhi of emptiness, countless celestial goddesses appeared, showering him with flowers. As these celestial flowers descended, they covered half his body. He was sitting in a shower of swirling flowers that formed an orb around him, covering him up.

He awakened, looked up, and exclaimed, “So many swirling flowers coming down everywhere! Who are you? Why are you showering me with flowers from the sky?” Sakra-devanam Indra replied, “I’m the Lord of the Trayastrimsa Heaven, and I’m leading all the celestial beings to see you. In your samadhi of emptiness, your entire body radiates light throughout the whole cosmos. We saw this inconceivable light, so we came down to see what was going on. We discovered it was coming from you, Subhuti in the samadhi of emptiness. To give praises we showered you with flowers.”

The second phenomenon appeared when Subhuti got sick one day. You might ask, if Subhuti had attained the samadhi of emptiness, why he could still get sick. After all, he had attained the samadhi of emptiness. He no longer had a “self.” Nonetheless, he still had a physical body which had to follow the Buddha around. When he was hungry, Subhuti still had to beg for alms. He still had to eat. Since we humans eat grain, how can we remain free from sickness? Nobody can. No exceptions.

Everybody here, please raise your hand if you’ve never been sick or had a cold. Everyone has had a cold one time or another. If you don’t feel any ailments in your body right now, please raise your hand. [Someone raised their hand] You have no ailments whatsoever? [“No”] Backache or any other pain in your body? [“No”] Are you nearsighted? [“No”] Your eyesight is good, and you are not nearsighted? [“I got Lasik so it’s fixed now”]. You have had Lasik treatment? If you had Lasik, that means you were once nearsighted. [laughter] Grandmaster has never had Lasik treatment. I’ve never worn glasses. I perform an eye exercise every morning as soon as I get up. I have taught this practice before.

Every morning upon waking up, stand by the window, close your eyes and rotate your eyeballs clockwise fourteen times. They must be big rotations. Then open your eyes and look into the distance as far as you can. I look at the furthest double trees. I’ve trained my eyes this way for so many years. As a result, I don’t need to wear glasses. I can see very clearly, every letter, even the smallest print. One must put in the effort consistently to get results. This is also a kind [of perseverance].

Then, tap your teeth together 36 times. As time went on, I still lost a tooth. A dentist disciple, Dr. Kuei-Ching Hung, glued it back on. So, I can’t say my teeth didn’t have any problems. I did have some issues with my teeth and an infection in my gums as well. An infected tooth is also considered an illness.

What did they sing? They sang praise that Subhuti’s virtues and conduct are higher than the sky and his effort is as incessant as the flowing water. That his virtues are as high as a mountain. That his cultivation and merits is as lasting as the flowing water. The celestial beings sang for him! Music is healing and therapeutic. Subhuti immediately recovered from his illness.

Do you remember? When I was in retreat, I suffered from head splitting syndrome. It felt like my skull was splitting open. I visited Korea to pay homage and circumambulate temples and pagodas. There was a huge outdoor statue of Medicine Buddha. I paid homage and made prostrations to the statue. I was dizzy and almost fainted. On the way back home, I had a vision of Medicine Buddha [Bhaisajyaguru], Medicine King Bodhisattva [Bhaisajyaraja], Supreme Medicine Bodhisattva [Bhaisajyasamudgata], Sunlight Radiance Bodhisattva [Suryaprabha], Moonlight Radiance Bodhisattva [Chandraprabha] and the Twelve Great Medicine Generals. They all appeared before me. I knew then that I would recover from my illness. They were comforting me.

It was like how Indra descended to comfort Subhuti when he was sick. Indra and the celestial beings descended and sang for Subhuti. Why did Subhuti deserve to receive praise, a showering of flowers and singing from heavenly beings? Because he could truly enter the samadhi of emptiness.

[3] The Vajra Sutra contains many of these kinds of statements. It is a very difficult concept to understand. We translate as is. Grandmaster’s exposition will provide further explanations.