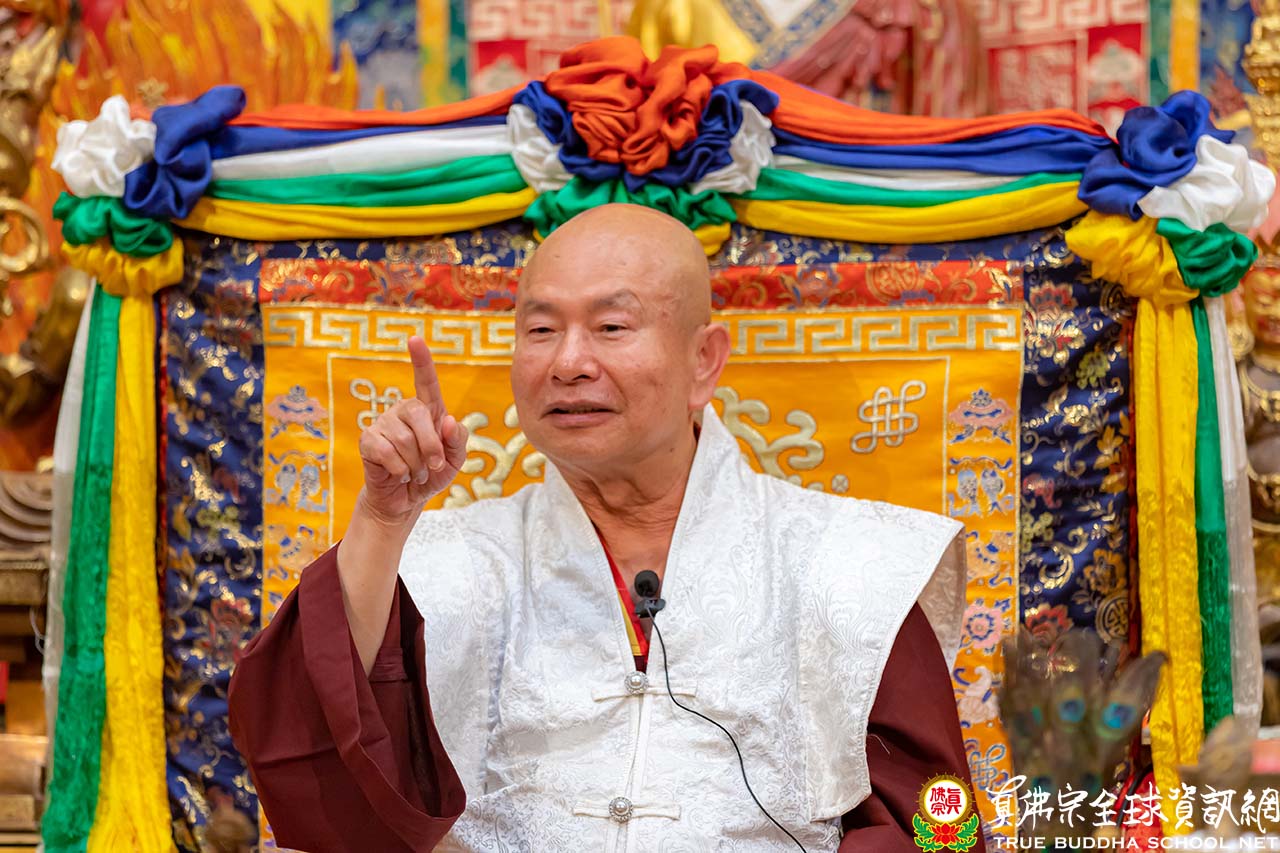 Today, we will talk about the Vajracchedika Prajnaparamita Sutra. Vajra was an indestructible weapon in ancient India. This is Vajra [Grandmaster Lu is lifting a vajra scepter]. Do you believe that it is indestructible? If you throw it against the wall or smash it against the ground, it doesn’t break; it keeps its shape. It was a kind of weapon in ancient India, and it represents the Vajrayana. We use this weapon to symbolize indestructibility, and that’s what this Vajra Sutra is all about. It is to destroy everything.

Paramita represents Mahayana. It also represents unparalleled attainment. This is a sutra of the wisdom of the indestructible vajra that annihilates everything to allow the attainment of highest enlightenment. Is that clear?

Let me tell you, I related this sutra to Kalachakra. Who emanated Kalachakra? Sakyamuni Buddha transformed to be Kalachakra. In South India, at Sri Dhanyakataka Stupa, Kalachakra Dharma was transmitted to the King of Shambala, King Suchandra.

What does Kalachakra mean? The wheel of time. As it turns, everything is destroyed, no exception. Would the lifespan of houses, like those of True Buddha Tantric Quarter, be longer than Grandmaster’s? Houses have longer lifespans, right? Some of them even have a lifespan of a hundred, two hundred or even a few hundred years. They become ancient buildings and they still exist. But will they eventually be destroyed? Yes, as time passes, the wheel of time turns and everything will disappear.

The real meaning of Kalachakra is that the gigantic wheel of time will destroy everything eventually. Can cars be broken? Yes. Can houses be destroyed? Yes. Can human beings be destroyed? Yes. How? Through time. You’re born as a baby, grow to be a child, then youth, middle aged, old aged and then you die. You’re gone. What is it that makes you go away? The wheel of time. Time. Amidst time.

Remember, Bodhidharma went to Tibet and his name became Dampa Sangye. Dampa Sangye transmitted to Machig Labdron a dharma called Body Severance (Chöd). It is a dharma to cut off or cut through. What is cutting? It’s the act to destroy. You’d cut your own head, or like the Japanese samurai would use harakiri to cut their own stomachs. The Samurai have three kinds of knives – long, medium and short. The short knife is used to commit suicide after failure or disgrace. They would kill themselves by cutting their stomachs. It’s called seppuku if I remember correctly. My dad often talked about it. How do you say it? Is it really seppuku? [A Japanese disciple in the audience confirmed.] I guess I still remember then. My dad used to carry a very thick wooden sword and beat me until the sword broke. That’s why Grandmaster has an iron body and bronze bones. He used to beat me like that. Crack! And the sword was broken.

Dampa Sangye transmitted to Machig Labdron the Body Severance Dharma Practice, which is the dharma of cutting through. You offer your own body to all buddhas of the three times in the ten directions, all bodhisattvas and mahasattvas, as well as all sentient beings of the six rebirth realms. That’s the spirit of forsaking and offering. A spiritual cultivator must have such spirits to have attainments.

Today, you have heard of my exposition on the Vajra Sutra. You must sever everything, including good and bad thoughts. Don’t keep them in mind, whether it’s good or bad. Don’t keep any issues on your mind. Wipe everything out. Just because someone said something, you’re upset for three days. It’s not worth it! You are a spiritual cultivator; you don’t keep all this garbage inside you. Instead, you want to take out the garbage. Money, career, romantic love, familial love, wealth and riches, including your own bodies, they all should be discarded completely. That’s Vajracchedika Prajnaparamita Sutra.

Now, do you understand the sutra? Did someone’s words make you sad for days? Or some small matter? Because of it you said that you don’t want to come here anymore. [Grandmaster is imitating an upset person.] “I will not go there anymore. I don’t want to give dharma teachings anymore. I’m not pleased.” [laughter] Would that do? Remember, everything is a good thing. I have said it. Everything is the best arrangement. However, the best arrangement means there is still something that matters; this best arrangement too should be discarded. My exposition on Vajra Sutra is different from others. I have talked about the title “Vajracchedika Prajnaparamita Sutra” alone for quite some time.

Perhaps you are familiar with the Vajra Sutra and chant it every day:

For you to achieve an attainment, you must discard your own body. Career, love, fate, fengshui, astrology – the Buddha said those are all rubbish. The Buddha disliked all that stuff. The one who knew fengshui was Sariputra, one of Buddha’s principal disciples, the one with the greatest wisdom. Only because one lives in the world, one uses worldly dharma to help sentient beings. Otherwise, they are useless.

Today I have explained Vajracchedika Prajnaparamita Sutra and I explained a little bit more clearly; it’s related to the dharma of the wheel of time. As time passes, everything is gone. It is related to the Severance Practice, the practice of forsaking our bodies. When a person dies, everything is gone. When a person dies, to him everything in the world is gone. What affection? What love? They are all gone! I was just talking in generalities. Everything in the world will eventually be gone.

A joke on SOB:

Emperor Qianlong went south of the river to tour his country in disguise. On the road, he met a group of tortoises blocking his way, addressing the emperor saying, “we want to become your ministers and officials.”

The emperor asked, “What do you offer?”

They replied, “Turtles’ eggs.” [which in Chinese is a slang for bastard or son of a bitch (SOB).]

[1] SOB or son of a bitch is the chosen translation for 王八蛋, literally the turtle's egg. Grandmaster meant that it is rubbish, but he said it in a unique way so that it registers stronger with the audience. It happened that he shared a joke about turtle's egg, so he used it as a skillful means in delivering his message.

Next discourse on the Vajra Sutra: Discourse 3, 1 August 2021 - Chapter One—The Setting of the Dharma Teaching (continued)

Previous discourse on the Vajra Sutra: Discourse 1, 25 July 2021 - The Meaning of the Sutra's Name