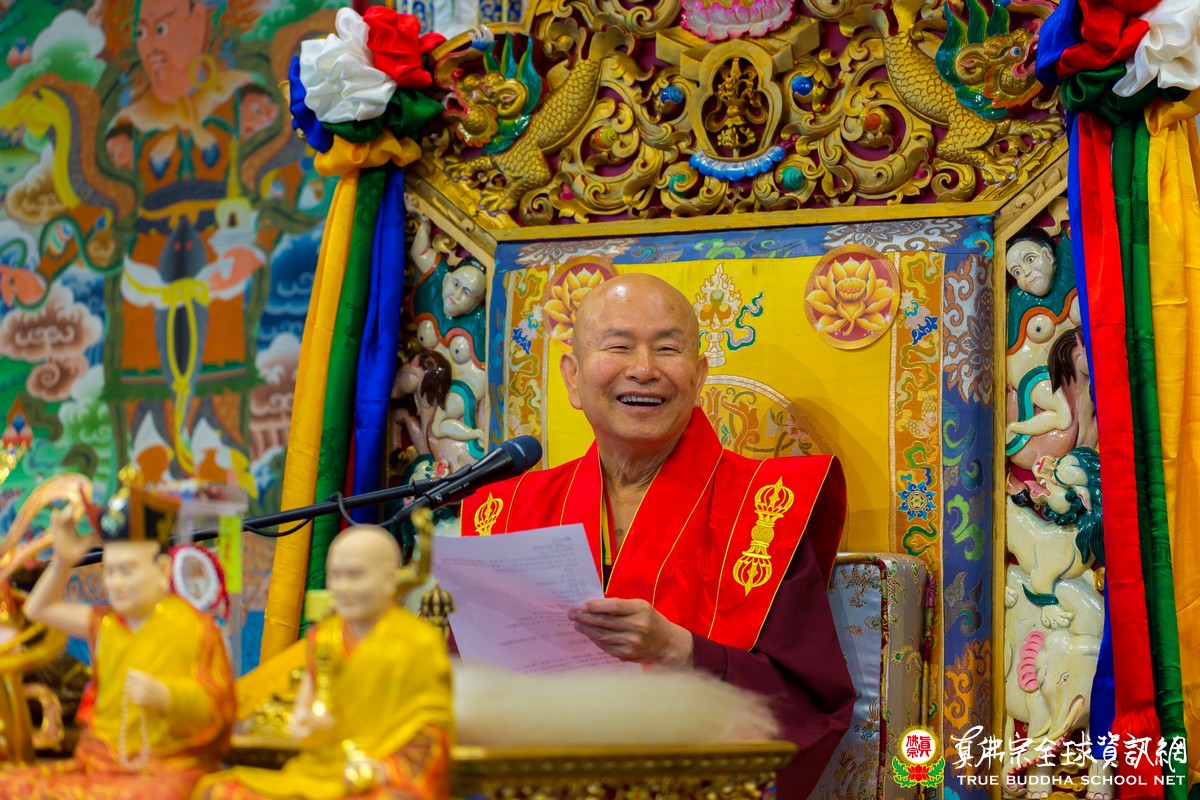 Today is the beginning of the Vajra Sutra exposition and we will talk about the word “vajra.” What is a vajra? Have you seen the movie “King Kong?” ['King Kong shares the same characters as Vajra in Chinese]. King Kong is a gorilla, so is vajra an ape? That was in the movie. A vajra, however, is not King Kong.

In ancient India, a vajra was a weapon used in battles between warring countries. So what is a vajra? A vajra is embroidered right here [on Grandmaster’s Dragon Robe]. This is a vajra! [pointing to the shape] This is also a vajra! [lifting a vajra scepter] Vajras were used as weapons in ancient India. It’s strong and indestructible. What was its function? Its function was to destroy anything and everything. In ancient India, the vajra was used to destroy one’s enemies.

Vajra has many meanings. We can also say this [vajra scepter] is a vajra, or this [embroidered symbol] is a vajra. It represents indestructibility. It is strong and formidable and does not deteriorate. It can destroy anything and everything, it annihilates everything. We hold a vajra like this, using the Wrathful Mudra to hold the vajra scepter, thus becoming a wrathful vajra/heruka. [Vajra is also translated as heruka when it refers to a few specific wrathful deities.] Our True Buddha School’s Mahabala—the Heruka with Great Power—can destroy everything. Dorje Shugden is a heruka with great power. He is also called Mahabala. Check out the Heruka with Great Power on your own if you’d like.

There are many people who are not aware of the true meaning of the Vajracchedika Prajnaparamita Sutra. What is the real meaning of the sutra? The title of the sutra itself reveals the meaning of the sutra; it means the annihilation of everything. This sutra is more commonly known as the Diamond Sutra; Vajra Sutra is the shortened title. [Vajra is often translated as diamond or thunderbolt in English.]

Everything is destroyed. For this reason, when Bodhidharma gave his dharma teaching, he went to his seat, slapped the table one time, then got off his seat. That was it. His exposition on the Vajra Sutra was finished. As for my discourse on the Vajra Sutra today, what is there to discourse when everything has been destroyed? Forget about discoursing. [laughter] When the dharma itself is destroyed, what dharma is there to discourse?

No one has ever expounded or talked about the Vajra Sutra this way. Speakers usually speak at great length, leaving the audience entirely baffled. What is being talked about? I am saying that the essential meaning of the Vajra Sutra is the destruction of everything! Even the buddhadharma itself is destroyed.

Think it over. Let me ask you, if you had become a buddha, say, Adharma Buddha, Vairocana Buddha, Amitabha Buddha, Medicine Tathagata, Aksobhya Buddha, Ratnasambhava Buddha or Amogasiddhi Buddha, would you still practice the buddhadharma every day? Would you need to? [Grandmaster asked the audience.] Right, it is the realm of no-practice. In the realm of no-practice, the buddhadharma can be discarded because you have become a buddha, correct? So practicing is the same as not practicing; not practicing is practicing. The essential meaning of the Vajra Sutra is the destruction of everything. This is attainment. If you had attained buddhahood, would you still be performing homa? To whom would you offer? Is there a deity who is not, in fact, you yourself? If you are still performing homa after becoming a buddha, then to whom are you offering? Ordinary human beings? What is there to offer? There is no longer a need to offer anything. One should be receiving offerings, not making offerings. Do you understand?

What is prajnaparamita? Wisdom. We know that prajna means wisdom, but prajna does not refer to ordinary wisdom. Prajna is the wisdom of the buddhas, not conventional wisdom or knowledge of the world. Prajna does not belong to worldly knowledge; it is non-worldly knowledge used to leave the world. Prajna is the wisdom one needs to leave the world. When this wisdom is perfected, it becomes the realm of emptiness, where everything has been wiped out.

My explanation is different from that of others, they may not explain it this way. However, there may be some people who would say that the wisdom is indestructible because vajra is indestructible; indestructible wisdom, vast and boundless sutra. Paramita refers to Paramitayana which is Mahayana. “What do you practice?” [Someone replies] “Mahayana, the greater vehicle.” Hinayana is the smaller vehicle, “the small potato” vehicle. [chuckled] Thus, indestructible wisdom, vast and boundless sutra; or we can say, the greatest sutra, the vastest and most boundless sutra. The sutra reveals wisdom that annihilates everything and reaches the fruition of buddhahood. Buddhahood, not the buddha field (pureland). [homophone]

[There is a kind of fruit called jackfruit, whose name sounds the same as the translation of “paramita” in Chinese.] Have you tasted jackfruit? How can this kind of fruit be called paramita? Where does it come from? Southeast Asia? Is it tasty? It has a strange taste, and I don’t really care for it.

Today, we have been talking about names. Vajra means both indestructible and annihilation. Prajna means wisdom. Paramita has several meanings, including vast and boundless, arriving at the other shore and attainment of buddha fruition. The sutra name [the extrapolation of the title] is quite long.

The translator was Kumarajiva, Master of Tripitaka, who lived during the Later Qin Dynasty. You can check the internet regarding the translator to find more information about him. He was, of course, an Indian. Or was he? Could he have been a Chinese that immigrated to India, became an Indian and returned home? [laughter] There actually was such a dharma teacher, Sri Singha, the guru of Guru Padmasambhava. He was a Han Chinese who traveled to India to learn buddhadharma. Guru Padmasambhava took refuge in him as his guru. He was a Han Chinese who went to India and became an Indian. Sri Singha transmitted the buddhadharma to Guru Padmasambhava, who was Indian.

Next discourse on the Vajra Sutra: Discourse 2, 31 July 2021 - Chapter One—The Setting of the Dharma Teaching