On April 26, 2009, with great compassion, His Holiness Living Buddha Lian-Sheng, the root guru of True Buddha School, had accepted the invitation from disciples to personally conduct the Ucchusma Fire Offering Ceremony (穢跡金剛護摩) and gave Ucchusma empowerments to all participants in Rainbow Temple. Once the news reached out, Masters, Dharma Teaching Assistants, Reverends, and Dharma members from all over the world came to support this auspicious ceremony. The fire offering altar centre was packed with crowds and noises. All seats were filled.

Grand Master accompanied by ShiMu and disciples, arrived at fire offering altar just before 3pm. Grand Master ascended to the royal seat after Grand Master serenely toured through and blessed the offerings prepared for the ceremony. Grand Master led all participants and began sincere invitation and chanting of Ucchusma mantra. The divine and wonderful spirits fulfilled the entire atmosphere, and the flaming blaze integrated all participants in the intense ray of blessings from Ucchusma.

Grand Master also mentioned that Ucchusma had united with Grand Master three times during the ceremony. Grand Master noted that Ucchusma can purify and remove filthy and bad karma from our bodies and hearts, increase fortune and wisdom, direct spiritual sentient beings to pure land, and eradicate all disasters because Ucchusma has positive resolute. Therefore, Ucchusma Dharma is the best resolution for all spiritual caused illnesses.

Grand Master then continued the lecture on the fourth chapter of the Essence of Hevajra - Empowerment of Hevajra (喜金剛的灌頂), which embraced the four levels of empowerments, external, internal, secret, and supreme. Grand Master endorsingly reminded disciples to diligently cultivate step by step following by each level.

Grand Master transmitted auspicious Ucchusma empowerment to all participants after the Dharma disclosure.

There were thrilling dancing, singing, and stand-up comedy performances after the ceremony. Grand Master also presented Tai Chi to bless all participants, which brought excitement to the atmosphere.

After the performances, Grand Master explained the geomancy of Rainbow Temple (divination by geographic features or by figures). Hearts of all participants were filled with gratitude and happiness. These cheering events left unforgettable memories. 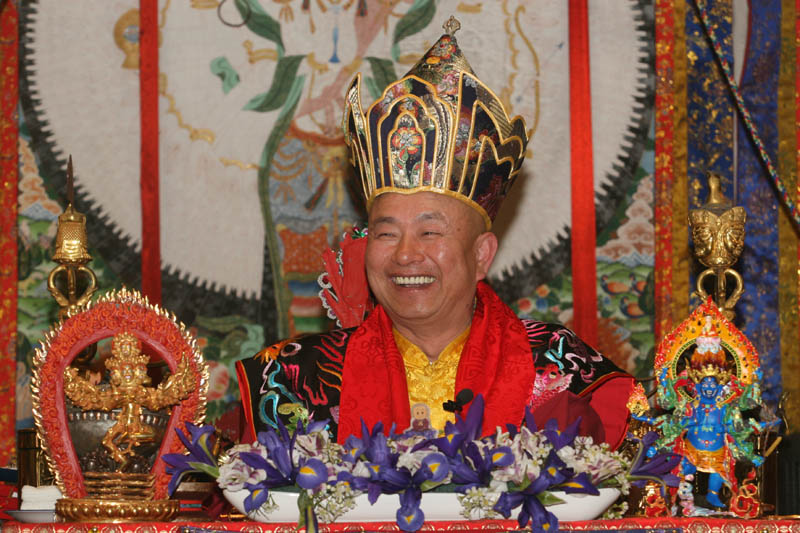